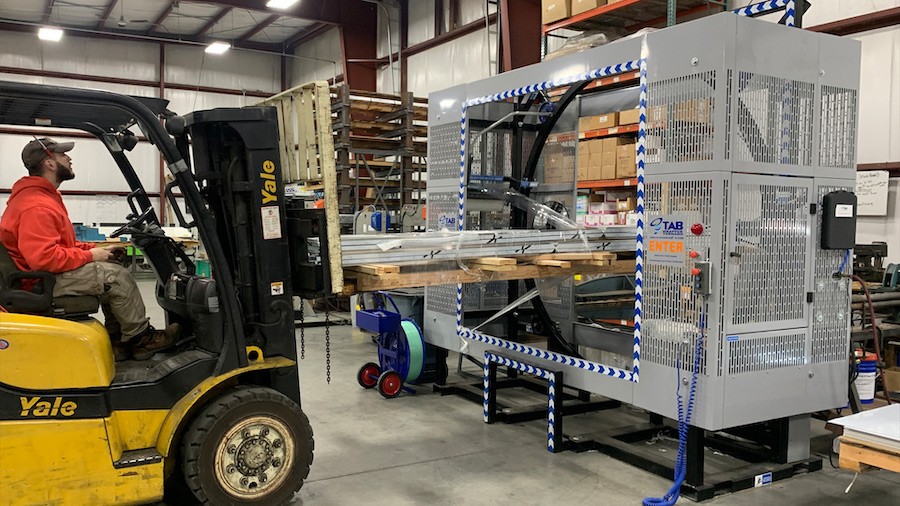 Business was booming at Penn Sheet Metal in Allentown, Pa. From the time the company’s president, Mike Roeder, purchased the metal fabrication company in 2002, revenues grew

quickly from $900,000 to more than $5 million annually. Sales were sparked by product line expansions in architectural and roofing components and custom decorative building products plus the addition of roll forming and laser cutting services.

Its stellar reputation for quality parts and products delivered on schedule during a hot market for commercial and residential real estate added more fuel to the growth trajectory.

But as orders surged, a constant bottleneck in the packaging process prevented the company from fully realizing its growth potential, diverted staff away from manufacturing and threatened its record for on-time deliveries. Approximately 10 to 15 pallet loads needed to be wrapped and shipped out daily, but because this volume didn’t warrant dedicating specific employees to the packaging process, each of the 20 machinists handled their own packaging.

After fabricating or bending an order of downspouts, for example, the machinist would load them onto a custom-built pallet and transport it by forklift to the loading dock for wrapping. Corralling a colleague or two to help, the workers passed a roll of plastic stretch film back and forth by hand over the metal products and under the pallet while raised on a forklift. This process typically required nearly 15 min. per pallet load. Sometimes, a single pallet wrap could take 30 min. or longer.

Given the long lengths and narrow widths of the downspouts, gutters and the company’s proprietary roof panel system, pallets typically measured an awkward 10 ft. by 4 ft. Wall panel systems required pallets measuring 16 ft. by 5 ft. Workers were unable to wrap the whole pallet load by hand and had to be content with wrapping only the ends, applying metal banding in several places to compensate for the inconsistent stretch wrap.

The steady stream of nagging injuries and the lengthy amount of time required to package orders for delivery bothered Roeder. After investing in automated laser cutting, CNC machining centers, press brakes and other modern equipment to speed up production, the decidedly low-tech task of pallet wrapping was hindering overall production speed and capacity.

“I always felt there had to be a better way, but manual wrapping and banding has been standard procedure forever,” Roeder says, “not just for us, but for almost everyone in the industry. We were wasting so much time wrapping pallets by hand until I’d finally had enough and looked for a solution.”

the wrapping machine automatically wraps stretch film 360 degrees around and under a pallet to secure the load to the pallet inside a weather-resistant cocoon and create a sturdy, tight, unitized load that resists shifting in transit.

To operate, a forklift driver centers the pallet load in the wrapping ring and presses the start button on the remote control from inside the cab. The wrapper then encircles the pallet and load in stretch wrap as the driver slowly moves forward or backward to encase the entire pallet load from end to end in the protective stretch wrap. When complete, the driver presses the stop button, the wrapper’s cut and wrap device automatically cuts the end of the stretch wrap, and the driver moves the wrapped pallet load onto a truck for delivery or onto a rack for storage or elsewhere in the plant for temporary staging.

Roeder purchased the largest of the standard TAB Wrapper Tornado models, sporting a 100-in. wrapping ring that fits pallet widths up to 5 ft., along with the optional wireless automation package that enables the entire wrapping process to be managed without leaving the forklift. The lineup of orbital wrappers offers varying levels of automation based on the required volume and throughput.

Since installing the orbital wrapping machine in March 2021, the company has cut the time required to wrap each pallet load from an average of 15 min. to 60 sec. or less and cut the number of workers involved in the process from two or three to just one. This saves an average of two and a half hours per day or more than 78 full, eight-hour workdays per year.

According to Roeder, after absorbing the retirements of several experienced workers this past year, the automated wrapper has turned any potential productivity losses into dramatic productivity gains. Also, the need for banding has been eliminated because the wrapper wraps the entire pallet load, front to back, top and bottom.

“We’re getting a much better, more secure wrap every time, even on our longest skids, and it wouldn’t even be possible to wrap them by hand,” he says, adding that occasional scratches to painted parts have been eliminated and not a single order has been rejected for damage in transit.

Roeder’s 20 machinists continue to manage their own packaging, only now they use the wrapper for everything that leaves the building. He says they learned how to safely use the wrapping machine in “literally 5 or 10 min.,” and the automated packaging process was online and in full operation within 20 min. of receiving it by flatbed truck. It plugs into standard 240-V, single-phase electrical service and connects to common compressed air lines.

“Everyone loves using it, and there’s no going back to wrapping by hand,” Roeder says.

Customers noticed the change in pallet wrapping, too, and appreciate the upgrade. Now, roofers, builders and other contractors can transport the pallet loads to their jobsites with ease, quickly identify the proper parts inside the clear stretch wrap and keep the parts protected from the elements.

“Sometimes, we set wrapped pallet loads outside now just because we can,” Roeder says, noting large tarps are no longer needed for deliveries. He’s also planning to use stretch wrap from TAB Industries’ own line of stretch film featuring the Penn Sheet Metal logo and branding the next time he orders new rolls for the marketing value.

“The TAB Wrapper Tornado is a solid, well-built machine that has saved us huge amounts of time,” he concludes. “Anyone wrapping long pallets needs to get one.” 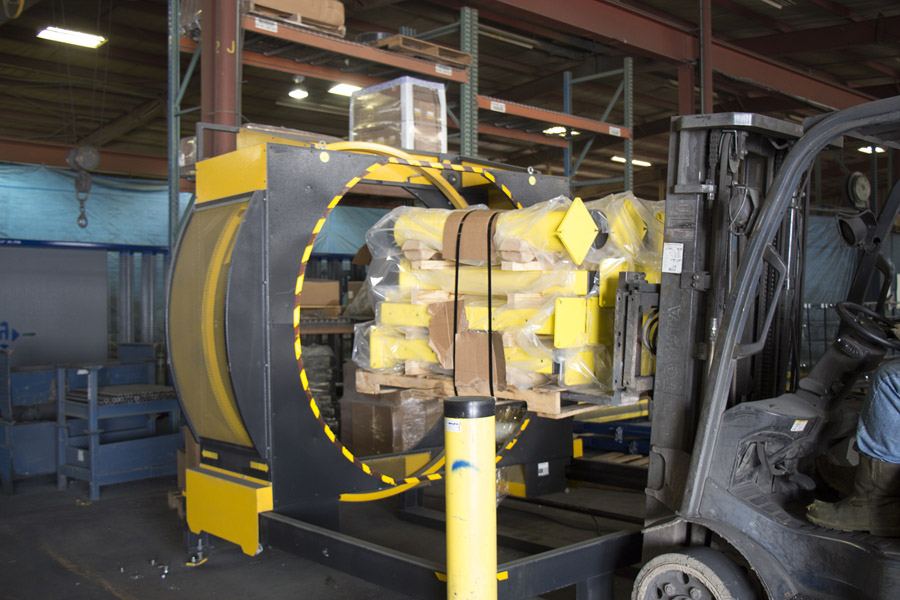 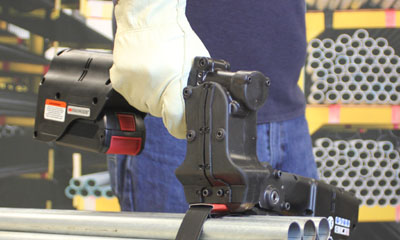 Material Handling
Wrap it, strap it, secure it
Tips for selecting the right load containment option for steel tubes and pipes
Jun 11, 2019 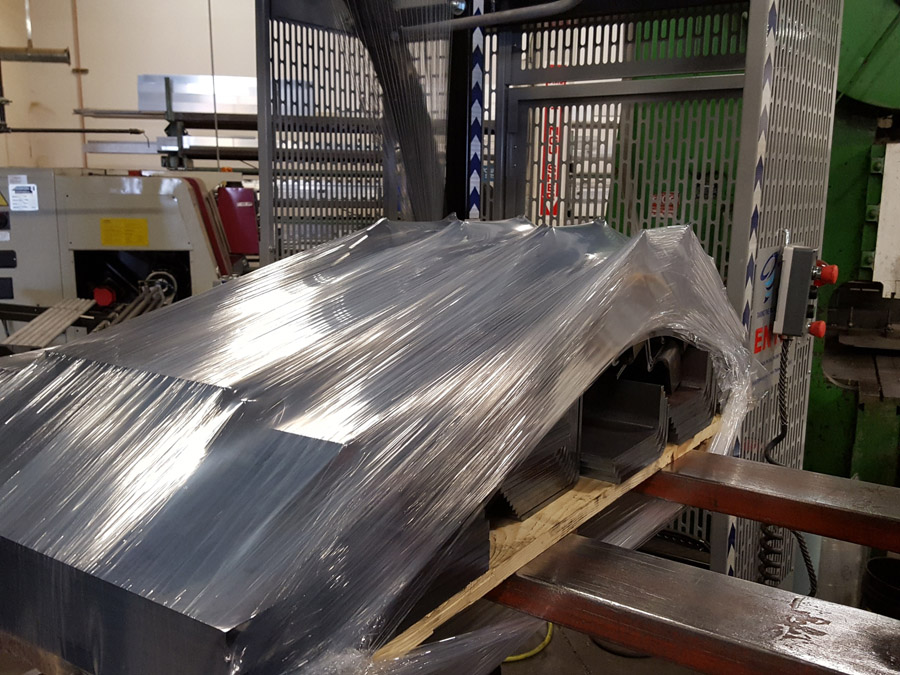