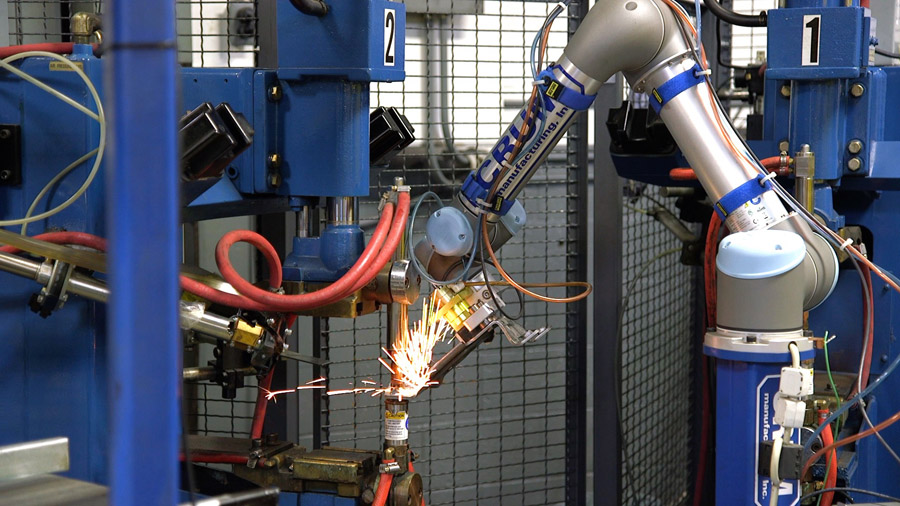 T&W Stamping in Youngstown, Ohio, wanted to automate one of the most labor-intensive parts of its metal fabricating process: the tending of resistance welders. This is a tricky application to automate because the welding equipment’s electro-magnetic pulse blanks out the robots’ servo motors so the robot has to be kept far away from the point of strike. The company, a contract manufacturer primarily in the heavy-duty truck market, found a solution, however, with a Universal Robots’ UR5 cobot that paid for itself in less than four months, delivering a 40 percent increase in efficiency and freeing up three operator functions.“Using collaborative robots to tend resistance welders?” asks Juan Rodriguez, director of automation at Crum Mfg. Inc., a certified systems integrator for Universal Robots. “To the best of our knowledge, this was not something anyone in the industry had done before.”

Craig Sivak, executive vice president and general manager at T&W Stamping, explains that the company had just received a contract from a large customer to manufacture powertrain brackets, saying, “Volume on it wasn’t huge – about 40,000 parts per year – but each part has eight nuts to be welded, so that’s 320,000 welds that we would have to present to the resistance welder.”

Sivak and his team decided to investigate whether collaborative robots could handle the task. “With a cobot, we could keep our existing layout, unlike if we used a traditional large robot, as we wouldn’t need additional guarding around the cobot due to its built-in safety system,” he says.

While it’s common for large industrial robots to be used in resistance welding operations, it is not an application that small collaborative robots have historically handled.

“Resistant welders set off an EMP (electro-magnetic pulse) that blanks out any kind of electronics in a certain radius,” Rodriguez says. “That’s not an issue with traditional robots with big C-clamp end-of-arm tools where the robot is extremely far away from the point of strike. But, a small cobot that could fit nicely into an existing cell? That’s a very different story.”

Crum Mfg. overcame the obstacle by grounding the robot and adding a non-metallic material to the custom-made end-of-arm-tooling, which distanced the robot farther from the resistance welder (see sidebar).

Being able to use collaborative robots for the 320,000 welds wasn’t the only pleasant discovery at T&W Stamping.

“When our engineers gave us the initial quotation for the UR cobot, we were stunned at the cost,” Sivak says. “Some of the larger robots we were looking at were six figures; we were expecting a much larger number.”

T&W Stamping was able to implement the entire cell for 30 percent less than it would have spent on eight separate fixtures to position the bracket to present to the welder. The contract manufacturer also freed up three operator functions.

“We’re in the neighborhood of 40 percent more efficiency than we typically would have been,” Sivak says, who also did the ROI calculations.

“When we factored in the cost savings from not requiring fixtures – and more importantly, the labor and other benefits saved with less operators – payback was less than four months.”

The cobot carrying out the cost savings is Universal Robots’ mid-size model, the UR5 with an 11-lb. payload and a reach of 33.5 in.

“The UR cobot picks the part up right on the datum point, which is very important because the cobot is being the fixture for the part itself,” Sivak explains. “Once the UR5 picks up the part, it knows the exact location of each and every hole.”

The part picking is guided by a vision camera from Cognex above the conveyor. With that guidance, the UR5 places the part in the first of two G.E. Schmidt resistance welders, which carries out the first four welds as nuts are placed on the part by a vibratory nut feeder. If the bolt the nut goes on comes out upside down or is missing, the welder has a tip that senses this and accommodates by sending a signal through a PLC to the cobot to discard the bolt and have another one shot over.

After the first four welds are performed, the UR5 rotates the part and moves it to the second resistance welder that completes the final four welds. Splitting the cycle between two welders keeps them from overheating. The 52-sec. cycle concludes as the UR5 moves the part to a second Cognex camera above the outbound conveyor that checks that the part has all eight welded nuts, that they’re in a correct position and that they all have threads.

T&W Stamping runs eight-hour shifts, five days a week. The UR5 cobot typically operates at 60 percent capacity and has been in operation for more than two years. 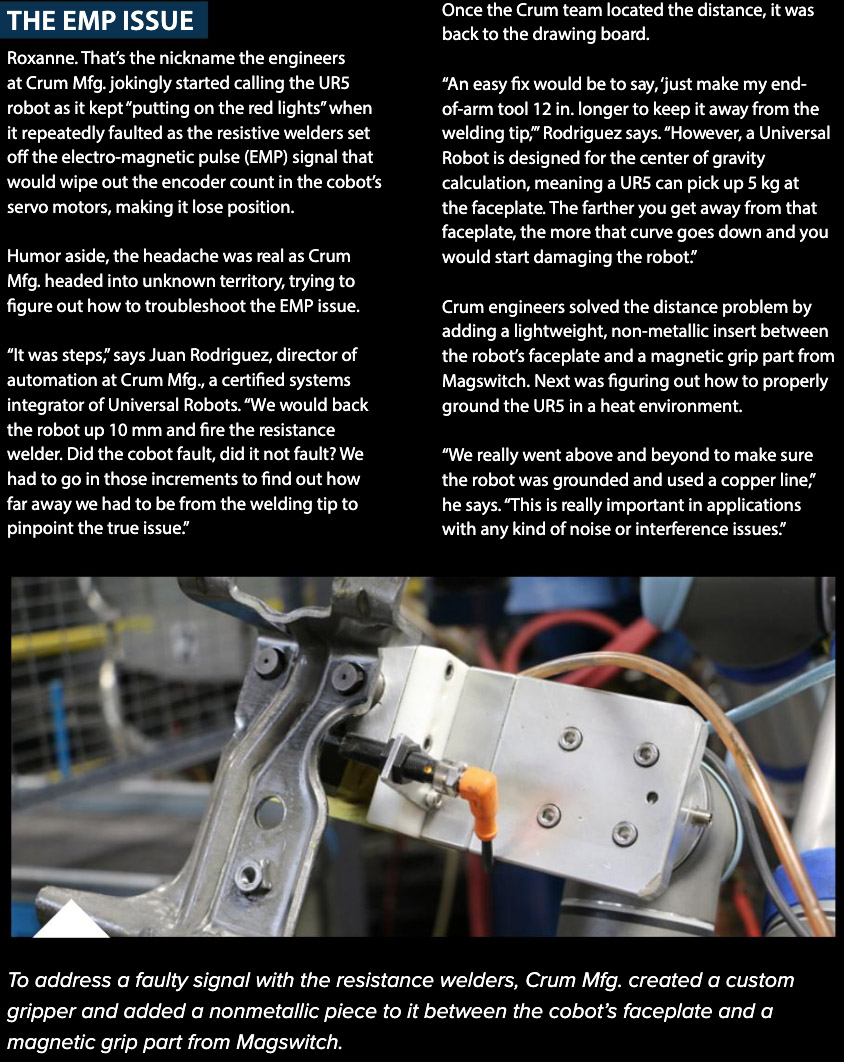 “The benefit that we see from installing the UR cobot is consistency,” Sivak says. “It does a fantastic job, and we haven’t had any production issues or downtime with it. If we didn’t have the cobot, there would have to be more operators in that cell managing all of the fixtures needed to get the nuts on that part.”Developing the cobot cell for T&W Stamping is an accomplishment Crum Mfg.’s Rodriguez does not hesitate to call a homerun.

“These resistance welders are more than 30 years old,” he says. “Being able to find a way to interface them with brand-new cobot technology is a big win both for us and the customer. We will definitely see more integration of Universal Robots’ cobots with resistance welders and with welding equipment altogether.”

Installing the UR5 meant that T&W employees had a new type of colleague working side-by-side with them.

“Initially, our operators may have been a little nervous, but once they got into the cycle, it worked out well for us and the workforce, as they are now performing other more value-added operations,” Sivak says, emphasizing how the cobot has empowered the employees.  “After the training, they just hit the ground running and have done really well with it.”

Frank Fowler is one of the operators that used to tend the resistance welder. Instead, he is now programming the robot and is in charge of product inspection.

“As far as interfacing with the cobot, I must admit I was a little overwhelmed,” he says, adding he has no background in robotics but learned the basics in a three-day training course. “It seemed like a lot to take in, but the cobot is actually user friendly and I enjoy working with it. The process is less monotonous now, and it’s interesting to watch all the systems interact with each other.”

Having gained confidence with Universal Robots from the first application, T&W Stamping has now started to look at other tasks that cobots can handle.

“We produce oil pans with components resistance welded into them,” Sivak says. “Because of the size and configuration of the part, it would be very difficult to automate the resistance welders. Our intention is to use a UR cobot to fixture the components into the part as well as put a torch on one and do the MIG welding with that. This will be a new process for the cobot as opposed to what it’s doing today, as it will actually be doing the welding itself.”

T&W Stamping specializes in deep-drawn and heavy-gauge steel, stainless steel and aluminum products. The company serves global OEMs in the medium and heavy-duty truck, bus, aerospace, construction and marine markets in Americas, Europe and Asia. It is one of the world’s largest producers of steel oil pans, transmission pans, and sump covers.