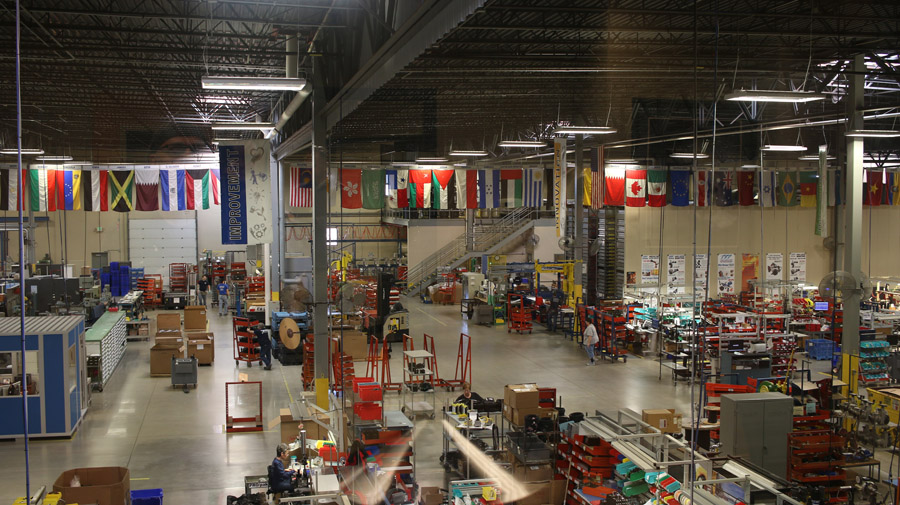 CEO of Task Force Tips, Stewart McMillan, still remembers his father looking up at him with pen in hand saying, “Are you sure about this?” when the family-owned company bought their first CNC machine tool 40 years ago.

“It was a huge step,” says McMillan who started integrating robots with machine tools as far back as 1990. “But giving people the proper tools to do their job is essential to being productive.” Those robots, however, were dedicated to working only on the machine they were installed with and could not be redeployed to other jobs.

“What happens is the machine wears out first and then you have a $100,000 robot that you can’t do anything with,” McMillan says. “We had heard of collaborative robots that could be used in a much more flexible manner, so we decided to explore the new technology.”

The new robotic technology would be used to produce the variety of firefighting products manufactured at Task Force Tips. In fact, the company found its roots in producing nozzles for fire hose lines. And since those early days, the company has branched into additional products geared toward improving the way firefighters do their job. 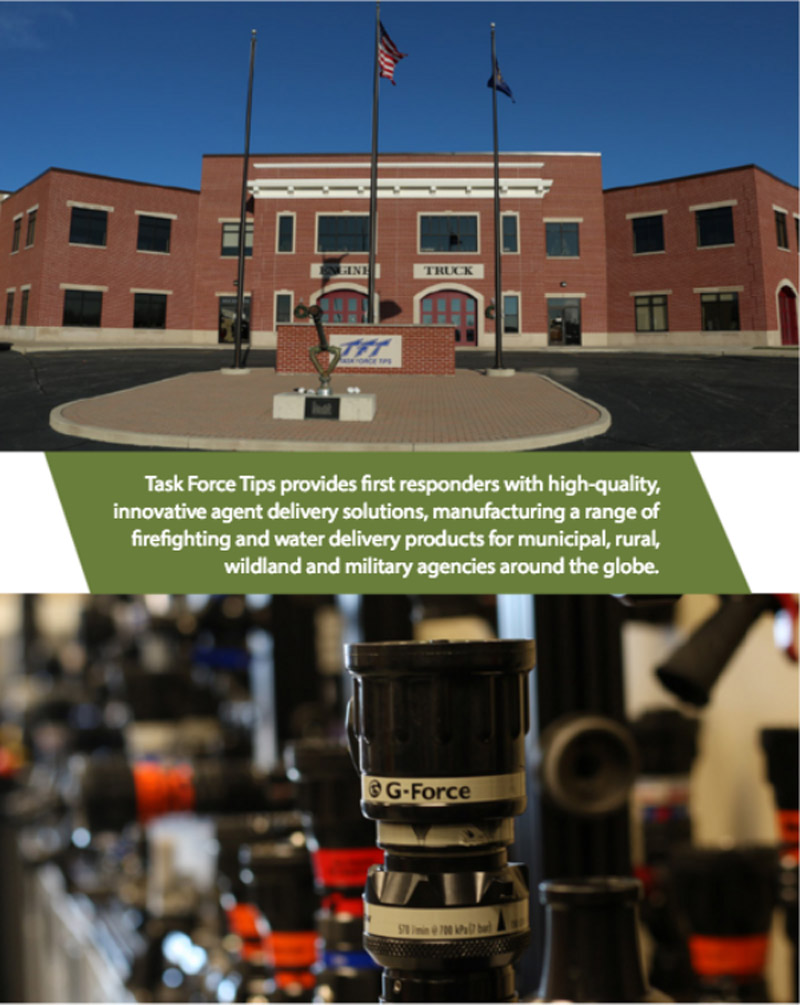 Production supervisor at Task Force Tips, Cory Mack, recalls how within literally minutes of the Universal Robots’ demo coming in, his colleagues were already trying to figure out how to program it and make it work.

“The UR robot was so simple and non-intimidating that our programmers were already in the mindset of, ‘I don’t need any guidance, I can do this on my own,’” Mack says. “It was almost like a PlayStation video game where they could pick up the controller and figure it out without reading the rules to the game.”

After the demo, Task Force Tips installed one UR10 robot and two UR5 robots to work with CNC machines with a third UR5 mounted to a table on wheels that could be moved between jobs. The UR robots can work collaboratively right alongside employees due to a built-in safety feature that causes the robots to automatically stop operating when they encounter obstacles in their route. A scenario McMillan calls “a fundamental paradigm shift.”

“A major impediment in the past to using robots was the security fencing required around the machine,” he says. “The beautiful thing about the UR robots is that you don’t need all that guarding. We can roll the table with the robot right up to the machine and in a few minutes teach the robot to load parts. They become a partner that goes around and helps [employees] with the drudgery [of the job].” 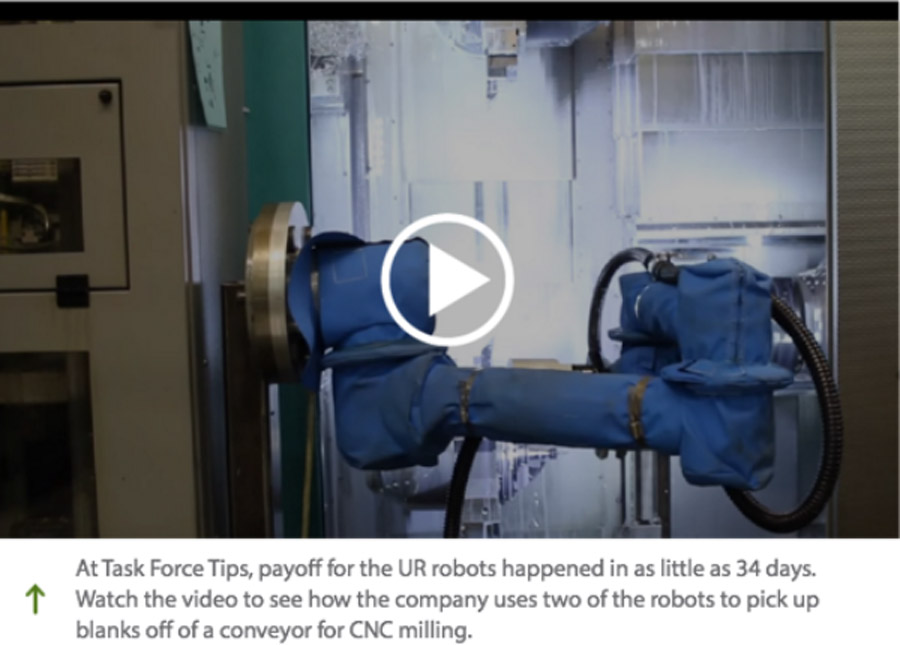 Task Force Tips has its production layout set up in non-traditional cell formats with operators running multiple machines simultaneously around the clock. Mack explains how the UR robots have reduced staffing requirements from seven to three operators.

“Now it only takes about one hour per operator per shift to set up a robot, which includes laying out parts and staging the robot. That means the robot is running for 21 hours unassisted, so we’re looking at a return on investment of about 34 days to pay for the robot,” Mack says. “That’s seven hours of time in each shift we’re saving for that person to be doing something else that’s adding to productivity.” 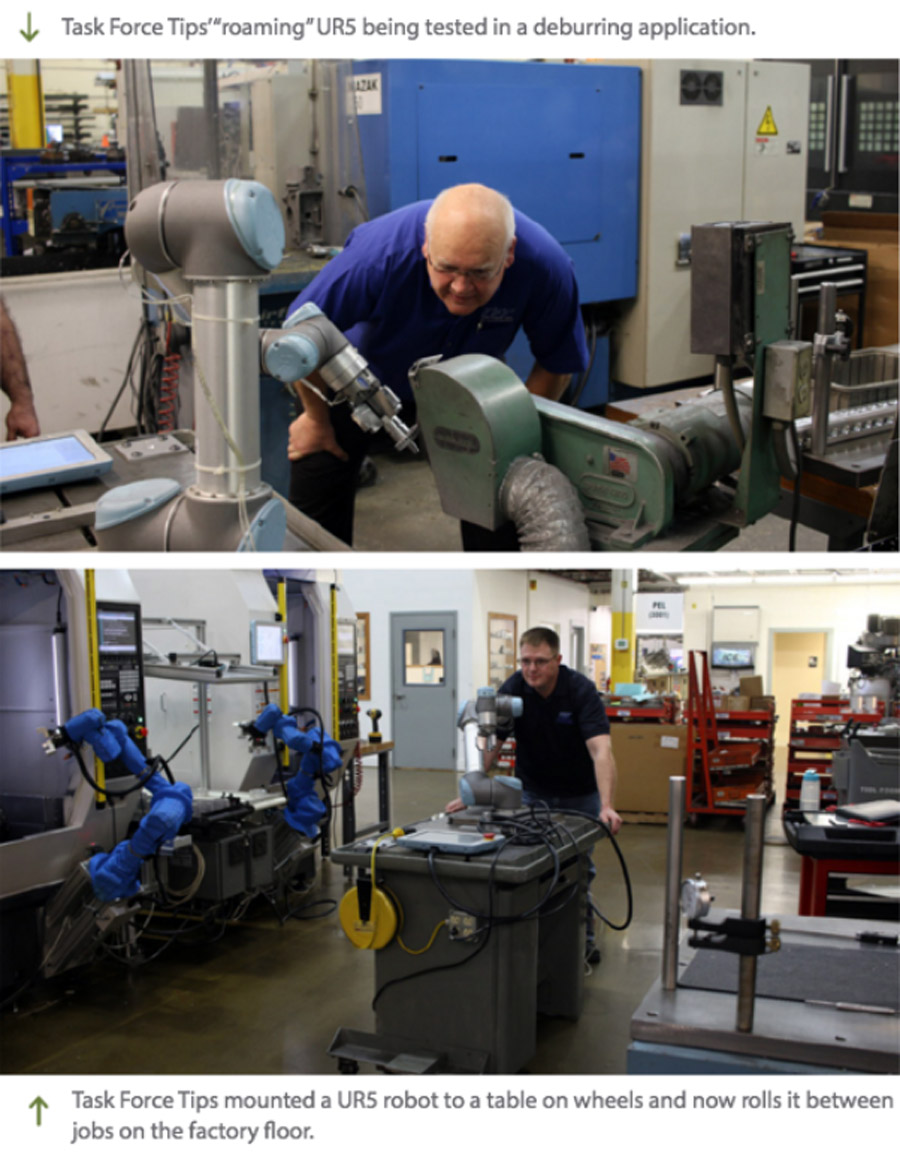 Having the two UR5 robots work in tandem in one cell has also helped optimize production of hose couplings. As blanks arrive on an inbound conveyor, the first UR5 robot uses vision guidance to identify and pick up a blank and then insert it into the milling machine.

From there, the UR5 removes the half-machined part and hands it over to the second UR5. The robot inserts the part into a second machine, takes out the complete machined part and places it on an outbound conveyor where an operator places the part onto an anodizing rack, completing the cycle.

It’s a process that – as Task Force Tips’ automation specialist Adam Hessling puts it – looks very impressive, but was deceivingly easy to set up. He refers to himself as a “journeyman machinist” with no specific robotics programming experience.

“My background is all in CNC programming, but I just used the Universal Robots’ support website to find a lot of really good information and wound up being able to put together the two-robot machining cell doing the hose couplings without any external help,” he explains. “If you understand basic logic, you can do an unbelievable amount with the UR robots.” 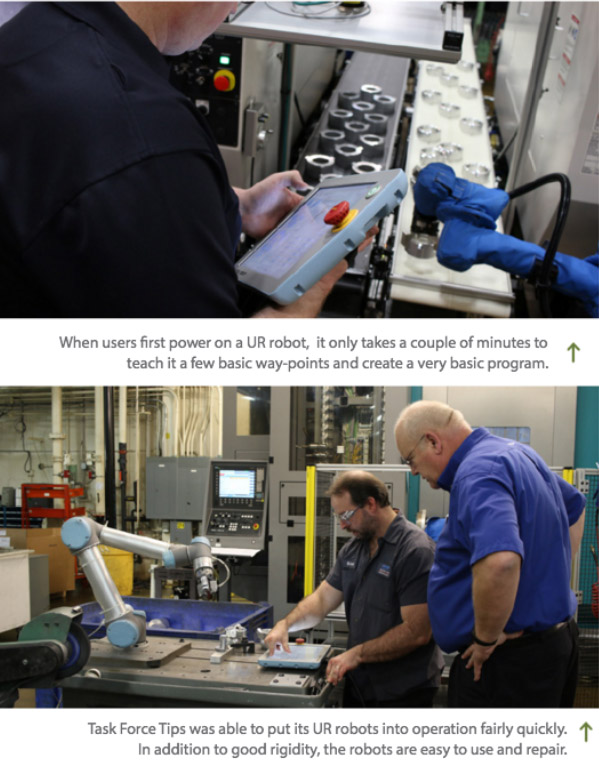 Both the robot handoff and the vision guidance use the Modbus communication protocol registers in the UR robots controller.

“Using Modbus made the communication between the two robots very easy to do,” Hessling says. “Through the touchscreen that comes with the robot, we just set the way-points that we want the robots to move through and the two robots confirm back and forth to each other that they are where they are supposed to be.

“You can have discreet inputs and outputs just like a normal PLC would have or you can do register values, which is what we use to do the coordinates for the camera,” he continues. “Modbus registers that it can output and we just send the coordinates to the Modbus registers in the UR controller that generates the way-points of the parts and directs the robot there. It didn’t involve any scripting at all.”

In addition to calling it a clean installation, Hessling says that “all of the communication we did was through our computer network,” and that “nothing is actually hard wired together.” 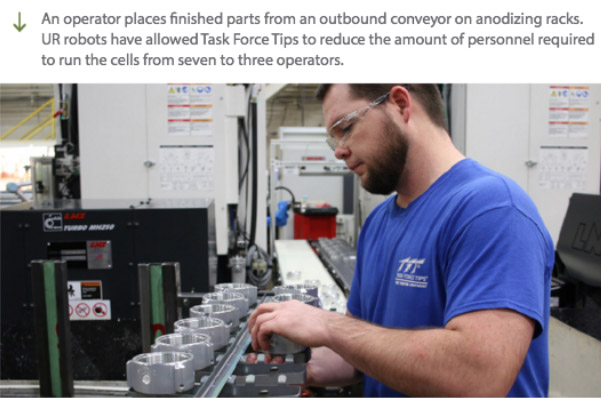 When the UR5 places a part in a lathe, the robot’s force detection identifies if the part is misshapen or has burrs from the saw cut. It also identifies if there are machining chips in the chuck jaws.

“When the robot tries to reach the set way-point for placement and there’s an obstruction, which causes the force on the end of arm to exceed 50 newtons and which I programmed as the threshold, it knows something is wrong,” Hessling says.

The robot then applies an air blast to try and clean whatever debris is in the way. The robot goes through the air blast several times and if it still can’t place the part, the robot tells the machine to execute a “chuck wash” cycle, which uses the machine’s high-pressure coolant system to dislodge debris from the chuck jaws.

If the part still can’t load after the coolant wash, a pop-up appears on the robot’s touchscreen, instructing the operator to clear any debris from the chuck jaws and then press continue. If the issue persists, another pop-up halts the program entirely. Then, the operator can diagnose the problem, fix it and restart production.

“I would estimate that the robot fixes the ‘failure to load’ issue about three or four times per hour, which has really helped us eliminate downtime,” Hessling says. “The operator only needs to intervene about once per shift, sometimes never. This is no fault of the robots; it’s just the nature of the aluminum we’re machining and the type of chips it creates.” 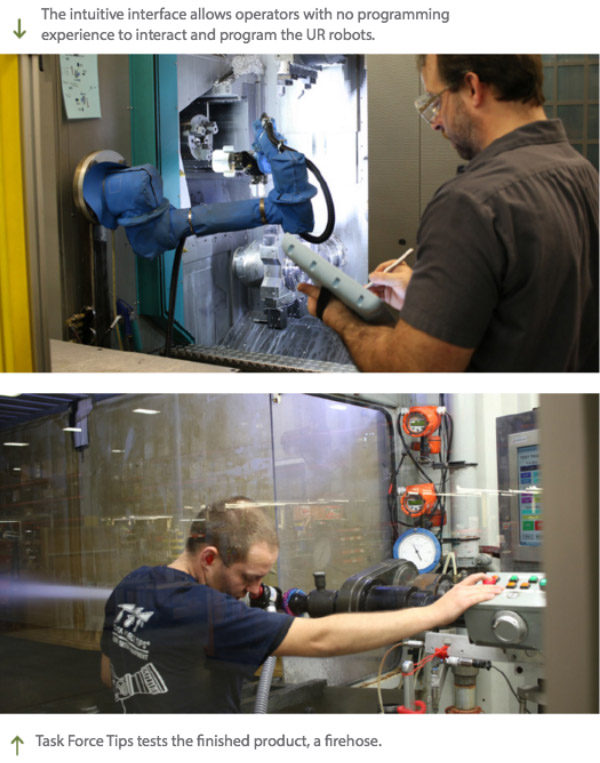 Freeing up personnel from machine tending has also played an important role in increased product quality.

“When our employees aren’t worried about keeping a machine running all the time, they have a lot more time to visually inspect the machined parts,” Mack says. “Part quality has really gone to a whole new level with the UR robots in place, while allowing our personnel to come up with new ideas and better ways to improve our production.”

McMillan adds, “When you provide people with a way to reduce the mundane labor in their daily job, they will apply it in a variety of ways. There have been many days where I’ve come in to find the robot somewhere else in the shop, somewhere that surprised to me. I don’t see possibilities being limited in areas we can use these.”

As McMillan quickly realized, future applications for the robots are unlimited. They could easily be incorporated into the company’s deburring, laser and packaging operations. Most likely, the next UR robot application at Task Force Tips will be at a deburring station within the UR5 robot CNC machining cell, but Mack and his team are busy testing the many application potentials.

“Right now, a person has to Scotch-Brite or deburr a part by hand again and again, taking time away from something else they could be doing,” Mack says. “So we’re testing concepts fo