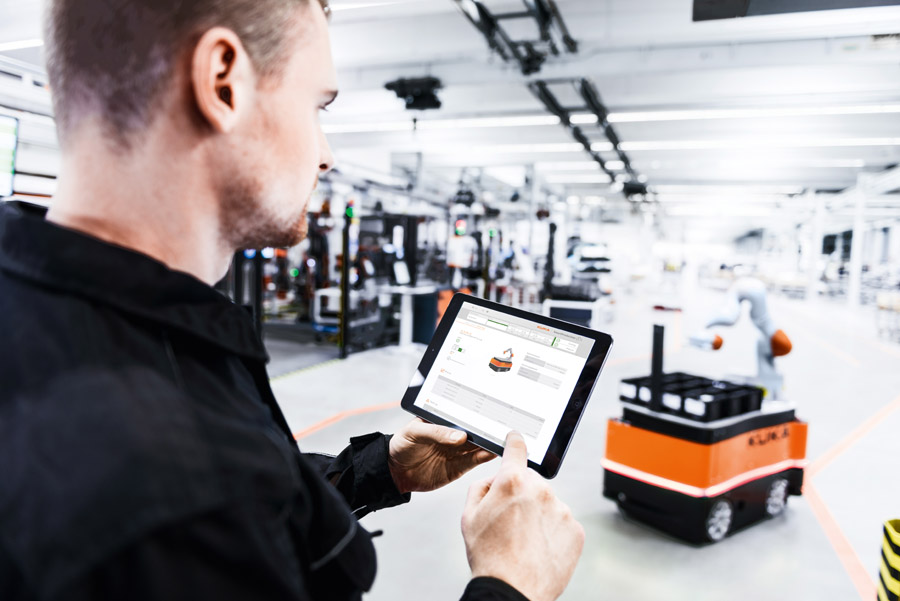 Most people will tell you there’s nothing wrong with teach pendants and that tens of thousands of manufacturers use them every day. They’re simple yet capable, don’t cost a penny to use, and bring none of the IT-related hassles associated with software upkeep, computers and servers, cloud-based internet connections and integration to CAD systems.

But using a teach pendant to program a robot incurs downtime. Isn’t elimination of downtime the whole reason for buying the robot in the first place?

Chris Kuppe, senior application engineer for robotic welding at ABB Robotics, offers several reasons why manufacturers should re-evaluate their use of teach pendants.

“The biggest problem is that the robot can’t be programmed until the fixtures are built, everything has been bolted in place and the cell is mechanically ready for production,” he says. “This means waiting until the very end to address a crucial aspect of the cell’s functionality. And since there’s typically been little to no involvement between the programmer and the integrator up until that point, that might mean having to go back and change something after the fact.”

Offline programming and simulation software systems, on the other hand, are an integral part of workcell development. The mechanical components are modeled in 3-D space early on and their interaction continually refined as necessary to improve the robotic motion and efficiency.

There are no surprises at the 11th hour, nor expensive rework. And once the workcell is up and running, it’s much easier to evaluate new product introduction into that cell, simulating its potential impact even while production is underway.

Yet there’s more to these software systems than a bunch of pretty simulations, Kuppe notes. In ABB’s case, its RobotStudio suite is used for configuration of the robot and positioners, equipment management, I/O setup and viewing, live editing of controller code, network program storage and remote troubleshooting, all of which can be done from anywhere on the planet.

ABB is a little different in this respect than the other robotics manufacturers interviewed for this story. Fanuc has its RoboGuide software, and Kuka its SimPro, each offering robust functionality for control and management of their robotic wares far beyond what’s possible with a teach pendant.

And as with ABB, each company also provides various “plug-in” modules that target specific applications, greatly extending the robot’s capabilities. Best of all, the core software system is often provided with the robot at no additional charge, just like the pendant.

So why don’t more people use these offline programming tools?

“A lot of people find it easier to program the robot using an actual part, just as they’ve always done,” says Mark Scherler, general manager of Fanuc America Corp. “Sometimes this is simply resistance to change, but there’s also the fact that the workpieces and fixtures you’re attempting to manipulate with the robot are oftentimes not as precisely made as is needed for accurate simulation. This leads to variability in the process, which can, in turn, cause difficulties in creating an effective program.”

The solution is two-fold. Obviously, accurate models are needed to create an accurate offline program. But in lieu of this (or perhaps in addition to), the teach pendant can be used to assist afterward, helping to fine-tune the setup once it’s actually on the shop floor and making up for any deviation from the models.

The good news here is that, even though this tweaking creates some downtime, any positional adjustments can be retained and used in future setups, leading to continuous improvement in workcell accuracy.

“There are a lot of advantages to offline programming,” Scherler adds. “The biggest one is that it allows people to validate their processes ahead of time. You can design a workcell with the robot that you want and then make sure it provides adequate reach, verify that there’s no interference with your tooling and check cycle time. All of this is done without actually having to build or assemble anything. It minimizes the number of changes that you might have to make later on, and it helps to reduce costs.”

In all fairness to teach pendants, the decision to take programming offline depends, in part, on what the robot does all day. A simple pick-and-place operation, for example, is easy enough to program using a pendant and probably won’t take more than a few minutes. The same can be said for spot welding, loading and unloading parts on a CNC or any of the other mindless tasks robots do each day.

Still, the effort taken to model and then simulate a robotic application – even basic ones – is often a wise investment and will become progressively easier as more and more pieces of the shop floor are modeled in 3-D space.

For shops considering the move to offline programming and simulation software, one of the first things they should determine is whether the relevant CAD models exist. If not, does the shop employ someone able to create them? Assuming that one or both of these is true, there must then be a determination made whether the parts and fixtures are accurate enough for reliable simulation.

“How closely does everything match the virtual world? If your physical parts vary by a quarter of an inch, it’s not going to matter if your CAD data is accurate to microns.” That’s according to Mitch Dupon, product manager for arc welding at Kuka Robotics, who adds that an increasing number of shops are making the switch to offline programming.

“We see teach pendants used less and less,” he says. “People that are welding large parts and have a cycle time that lasts 45 min. are doing that offline. The same can be said for many painting and adhesives applications, part deburring and anywhere there are complex motions involved.

“Even if they can’t get it programmed all the way,” he continues, “they can get it 80 percent complete, download it to the robot and finish things up on the teach pendant. That’s probably our biggest piece of advice to customers – use the offline software, but plan on touching up the motion points. Either way, it saves a lot of time and keeps the robot running more.”

Andy Chang agrees. The director of product marketing for the Americas at Kuka, he notes that offline programming and simulation leads to more uniform workflows and greater efficiency overall. Consider the most obvious use of robotics: an automotive assembly line.

In this instance, teams of programmers and technicians work hand in hand with industrial engineers to model the entire line, balancing the different operations while assuring that a multimillion-dollar system won’t suffer timing problems or crash due to interference between a robot and a moving F-150 chassis.

You just want to load and unload parts from your press brake; how does any of this robo-mega-factory example apply to you? Perhaps it doesn’t, and sticking with the pendant will continue to be the most cost-effective way to manage your shop’s limited use of robots. But consider for a moment that robot use is on the rise, and with it comes greater opportunities for efficiency as their manufacturers develop increasingly clever ways to make them hum.

Here again, it comes down to the workflow, Chang says. Whether you’re managing a few robots or a few hundred, making the best use of your investment means cutting away the downtime fat, no different than with any other CNC machine tool on the floor. And one of the best ways to do that is understanding how the robot is going to interact with the other pieces of equipment long before metal meets metal.

“When you’re doing simulation on a CNC machine tool, everything is fairly finite,” he says. “You have to define the boundaries, such as where the sheet metal is, the workpiece, the chuck and the cutting tools, and once you’ve modeled it all, it remains static. A robot environment has more variables, with a larger workspace and potentially far more components, but it’s still quite doable.

“You do, however, need a simulation engine that considers the physics behind all these moving parts,” he continues. “This means understanding how much torque is being applied in a given situation, the inertia of the robotic arm as it swings a part into position, the current draw – accurately modeling that is very important in this application.” 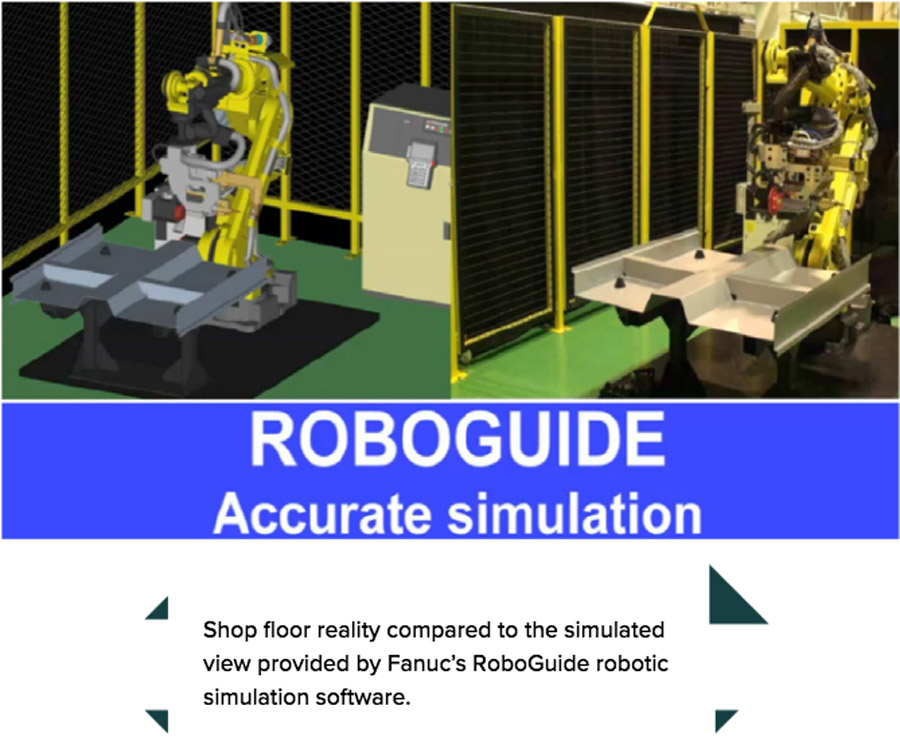 Of course to do that, you need data. Most robotics manufacturers offer remote monitoring of their products via cloud-based systems that capture various data elements from robots in real-time, using it to perform diagnostics and predictive maintenance. But as the adoption of these systems becomes more widespread, it’s certain that robotic behavior will not only be analyzed for improved uptime but for better programming and simulation, as well.

The bottom line is simple: Teach pendants have their place. No one is forcing robot users to implement programming and simulation software, nor would anyone argue that doing so requires an investment in both time and money. But, you can be sure of one thing – if you don’t use every tool at your disposal to improve part production and quality, that’s fine; just know that your competition surely will. Maybe it’s time to put down the pendant, and take it offline.