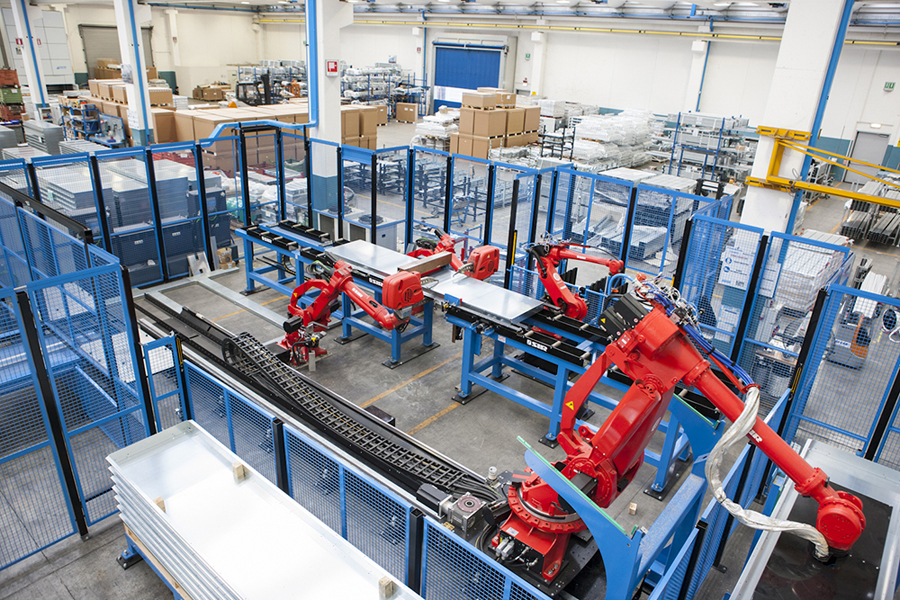 Since its introduction to the industrial marketplace, robotic automation has been a game changer. In essentially every manufacturing sector, it provides a viable opportunity to reduce costs and increase process productivity. It’s also often characterized by a high degree of technological conversion, meaning that a robot used for a certain task can be easily and quickly converted for other operations, no matter how different they are from the previous one.

Flexible, productive and efficient. That’s what manufacturers are looking for. And that’s what can be found in one of the most recent and innovative applications created at System Fiorano Modenese SpA with its parent company Soluzioni Industriali Robotizzate (SIR). Since 1970, System SpA has produced solutions for industrial automation across various sectors, including ceramics, logistics and packaging. The company’s robotic systems integrators are some of the best in the world, known for their technological expertise and creativity. Their talents are utilized throughout the family of businesses. System SpA also owns two businesses: System Logistics and Modula.

System Logistics and Modula are intralogistics and material handling application providers. To create their products, which include vertical storage containers, both rely on their parent companies for the technologies that they design, engineer and produce in-house. The tight relationship allows System SpA to oversee operations and ensure its subsidiaries are delivering the highest quality and reliability possible in their products.

To produce the metal trays that are required for System Logistics’ and Modula’s storage solutions, a number of possibilities were evaluated. Productivity and flexibility were, of course, necessary elements. After a thorough study of the available options, the choice fell on a technologically advanced cell that employs robots typically used in the welding of car bodies. Proving its flexibility, the same cell was used to weld parts shaped like an omega onto the System-branded trays. 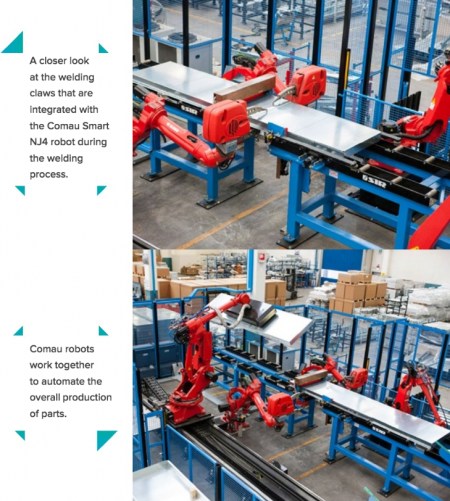 “To produce our containers, we’ve always used rigid bushes,” explains Franco Stefani, president of System SpA. “Until recently, this meant that the production had to be interrupted quite often. Every time there was a change in the tray model – in the metal sheet used or in its width or length – we had to stop, modify the installation and then proceed. It was no longer possible to continue like that.”

Flexible, productive and efficient: These were the three main characteristics that Stefani was looking for in a solution. He shared these desired traits with Luciano Passoni, founder of SIR and long-time partner of System SpA and Comau Robotics, an Italian producer and developer of robotic automation.

“Those were my three keywords,” Stefani says, “but there were other fundamental features that had to be taken into consideration, starting with quality. Our request was certainly to increase flexibility, productivity and efficiency, but also to find a solution to weld the trays in a single phase and improve their quality by welding them perfectly. We also needed to remain within our budget.”

Once the cell was installed, it completely changed the way the trays were welded. The cell’s success was made possible thanks to four Comau robots and a number of axes controlled from the outside, which automated the entire process. In particular, a Smart NJ 290 large robot with a payload of 290 kg was used for loading and unloading operations. A long-arm manipulator robot with a payload of up to 20 kg positioned and held the omega-shaped part that needed to be welded.

Additionally – what the team deemed an absolute innovation – two spot welding machines with Smart NJ4 90 robots were added. These were the robots typically used to weld car bodies, but now would perform the spot welding that System Logistics and Modula were looking for.

In addition, several controlled axes contributed to the success of the cell:

A transfer base of about 10 m, upon which the robot used for loading and unloading moves.

A traverser used to move the trays in front of the robot equipped with a servomotor.

Two external closures with controlled movement designed to center the tray in the correct position for welding.

A series of rollers with controlled movement positioned below the traverser used to move the trays, prohibiting the deformation of the metal sheet – an essential feature due to the risk that a sheet may not be completely flat during the welding phase. This is especially true with thin materials.

The production process generated by the installed robotic automation appears at first glance to be simple. In the first phase, the Smart NJ 290 places the tray that the omega-shaped parts will be welded on onto the traverser. Once in position, the tray is locked while the metal sheet is made perfectly flat with the intervention of the lower controlled axis.

“The big innovation of this cell, the design of which is anything but simple, is that it is no longer necessary to stop a production run,” Passoni says. “Since the only thing to do is insert the code of the tray using a control panel, the cell automatically adapts to the process that needs to be executed.” 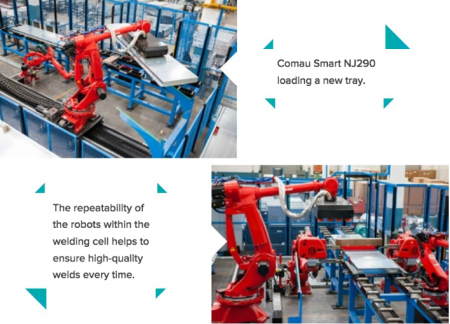 This variation covers all components of the automated system. The impulse sent from the control panel sets the welding parameters – including the thicknesses, type of sheets used (galvanized or stainless steel), number of sheets (two or three sandwiched layers), positioning of the omegas, number of spots and welding speed.

“The cell works without default quotas,” Passoni says, “which means that the tray is automatically placed in the correct position, taking into account all the parameters, as well as the width and length of the tray itself. We have also been able to ensure high quality of the welding spot, avoiding zinc migration with remarkable results. This guarantees a high-quality finished product.

“The solution with the trays,” Passoni notes, “allows the robots to work in an ideal condition by reducing the repositioning time and, therefore, the need to perform complex movements; movements which, over time, may cause a deterioration of the welding clamp’s alimentation hollowing. All this results in increased system efficiency.”

The cell achieved the objectives set by System SpA. Cycle times were reduced to the minimum, tooling times disappeared, and productivity and flexibility reached levels that are well beyond the previous implementation strategies. In addition, the combination of Comau-installed technology and the new technical adaptations ensure high-speed execution and remarkable quality of the welding spots.

“The needs that we explained to SIR were challenging,” Stefani says. “They were met thanks to the competence of the integrator and the Comau products. We worked together with SIR to find the best solution to automate a rigid process and today, thanks to the robot cell, tooling is performed in masked time. When the code of the product is inserted, the whole cell is quickly ready to produce the new element, resulting in a 50 percent increase in efficiency and productivity.”

The results achieved thanks to SIR and the Comau robots are truly enviable.

“SIR, with whom we shared both issues and technology solutions, is without a doubt one of the best systems integrators in Italy and in the world,” Stefani says. “Despite a potential for overlapping in terms of automation projects, as we can be considered competitors in certain areas, we chose to work with them because we trust their technical department and what they’ve managed to achieve over time.”

Stefani extends this flattering opinion to Comau as well.

“The Comau robots have confirmed the reputation for excellence they have in the market, which is derived from the excellence of their products in the automotive sector,” he explains. “We had the extraordinary chance to work with the Smart NJ 4 90 robot – the spot welding machine by Comau with its integrated clamp and clamp transformer – which has only been used in sheet metal work so far. Thanks to the clamp transformer, we can place high tension directly on the welding point, giving rise to quality products in which the 0.15-in. galvanized sheet metal is perfectly welded.”

This is a cell in which a machine-tending robot and a manipulator are used in addition to welding robots, and they’re all by Comau.

“We chose to keep the same supplier because we realized that we could count on their quality not only for robots specialized in spot welding, but also for handling,” Stefani says. “In doing so, the cell is perfectly integrated, easy to manage and guarantees high performance.”

Overall, it’s a state-of-the-art solution. And it’s one that appears to fully satisfy the expectations of System SpA’s management.

“The automation of this part of the production process put us to the test,” Stefani continues. “Yet, we are so pleased with what was achieved that we have not only doubled but tripled production: two identical new cells will be launched, starting with one in our American plant. We could not afford to miss out on the chance to have a 50 percent increase in efficiency and productivity combined with such high flexibility.”

The satisfaction was also expressed by the systems integrator.

“It wasn’t easy,” Passoni concludes. “But thanks to the efforts of SIR and the confirmed potential of Comau robots, together with technology solutions taken from the automotive world where the company expresses undeniable excellence, we have achieved all our objectives.”