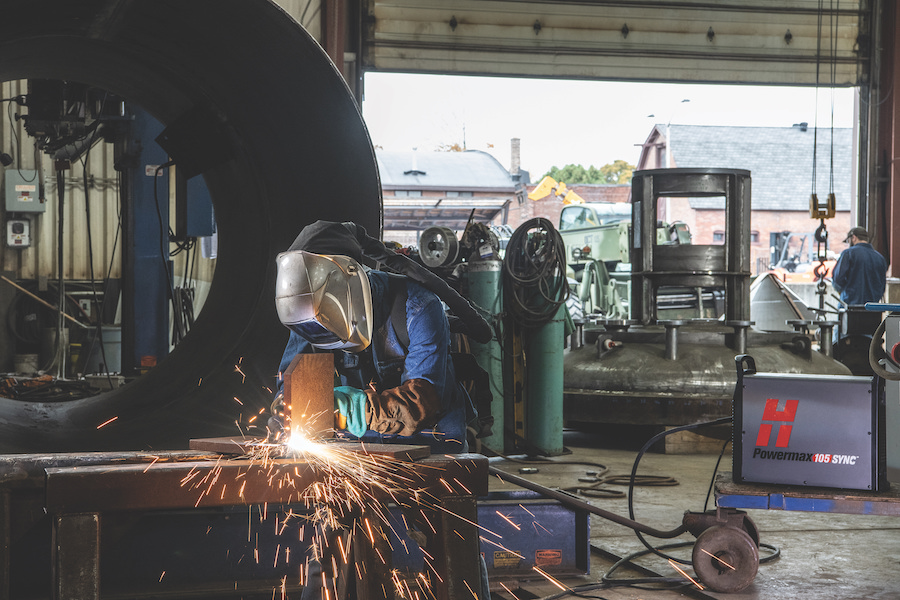 A decade in the making, Hypertherm Inc. has unleashed a major change to its Powermax machines, ushering in the next generation of plasma technology. The Powermax Sync series,

released in the United States in January, is available in 65, 85 and 105 amperage systems and features a single-piece cartridge consumable, built-in intelligence at the torch, plus data gathering and analysis functions.

“We started field trials quite early on this project,” he says. “This was more extensive than what we had done before because we wanted to make sure we understood how the products were going to perform in our customers’ environments.”

Lowering plasma operating costs is a focus for many plasma owners and operators, and directly related to that is determining when to replace torch consumables. Traditionally, the consumables consist of five individual parts that are stacked on top of each other, which is why these consumables are often referred to as a “stack-up.”

From the nozzle, electrode and swirl ring to the retaining cap and shield – any of these five parts eventually reach their end of life at different times. Identifying which part needs to be replaced represents a significant problem area, as mistakes made can lead to significant downtime, potential rework and unnecessary cost.

Erin Martin, reliability engineering leader on the Powermax Sync project, says plasma cutting is an inherently complicated process that’s dependent on understanding many variables, including the stack-up. Martin and her team were focused on manufacturing a single-piece cartridge that offered “comparative robustness,” thus the extensive lab testing and field trial process.

Mellott adds that the early field trials enabled them to make changes to the product design based on customer experience and feedback.

“Through ongoing dialogue with our customers and our channel partners during the product development,” he says, “we were able to better understand the problems the Powermax Sync series would solve, which enabled us to develop a strong value proposition and product positioning for a global marketplace.”

Hypertherm and other plasma cutting machine manufacturers have relied on multiple-piece stack-up consumables for decades. One of many challenges with multiple consumables is that users don’t always follow the manufacturers’ recommendations on when to change them, which results in poor cut quality, shorter consumable life and other issues, Mellott says, adding that Hypertherm “always strives to improve and solve these customer pain points,” and in doing so, eliminate the traditional approach with a single-piece cartridge.

“The single-piece cartridge will last as long or longer than our traditional consumable stack-up,” he says. “And as a result of the tight alignment of all those components pressed together in

a single-piece cartridge, we’re able to provide better performance. It also impacts what customers need to order – they no longer have to order five different parts for the multiple systems being used throughout their facility. This really simplifies the buying process and what they need to order and keep on hand for operators.”

“It’s literally that easy,” Martin says. “We completely took out all of the guesswork and training and made it fool proof.”

Perhaps an even more significant advancement with the new single-piece cartridge (and why it was named Sync) is that once it’s installed, the new SmartSync torch reads an RFID tag in the cartridge and sends the information about the cartridge to the Powermax Sync power supply to synchronize amperage and operating mode to match the cartridge.

Whether it’s a drag cut, gouge, FlushCut or FineCut cartridge, the power supply automatically switches to match it for optimal performance, which means the operator doesn’t have to go back to the machine and enter the cut mode or set the amperage or gas pressure. This reduces the chance of user error, such as grabbing and installing the wrong consumable components or other setup problems.

“For some operators, when there are problems, they use it as an opportunity to take a non-scheduled break,” Mellott says of the downtime associated with arc-off time. “So, with the automated features in the Powermax Sync systems, if they’re at the job site and they’re actually cutting or gouging and they need to need to change out the cartridge, say because the cartridge has either reached end of life or the operator needs to switch from cutting to gouging, they have no real reason to get up and walk away from the job.”

Pertaining to ease of use, Mellott notes that the skills gap has been growing steadily over the years, as skilled operators reach retirement. Training programs for new hires aren’t always robust, “so it continues to become more and more problematic for shop managers to hire and keep skilled workers.” Fortunately, Hypertherm has built in some intelligent features that make the skills and training gap less of an issue.

The intelligent features built into Powermax Sync are a huge value, because without the automated features, operators have to refer to a variety of cut charts and account for a variety of factors in setting the correct operating parameters on the power supply.

The SmartSync torch also has an industry-first amperage adjustment button, giving the operator yet another control option that doesn’t require leaving the workpiece to adjust settings at the power supply.

The RFID tag in the single-piece cartridge not only sends information to the power supply for syncing purposes, but it also records data that can be used to make operation, setup and training improvements. For example, starts and stops, total arc-on time and faults are all recorded and can be read on the power supply’s interface, or the cartridges can be scanned with a reader and smartphone app and analyzed on the app.

Additionally, data can be sent to a computer for analysis in an Excel spreadsheet. Without this useful data, issues that could be remedied otherwise remain hidden.

In one field trial, the data revealed opportunities for operating improvements for a customer. The customer found that the night shift was experiencing lower cartridge life as compared to the day shift. Hypertherm looked at the data and found there were many low-pressure faults on the cartridges used at night. This helped point to the root cause, which was lower air pressure in the facility at night.

The solution was to adjust the pressure settings, and the problem was eliminated. Furthermore, it was discovered that some operators had excessive starts and stops, which can wear down a cartridge, reducing its life significantly. With this data, the customer can now address the individual users and conduct training.

“We really have our customers to thank for Powermax Sync,” Mellott says. “They are the ones who shared their pain points and provided us with the inspiration to re-think the entire plasma cutting process.”