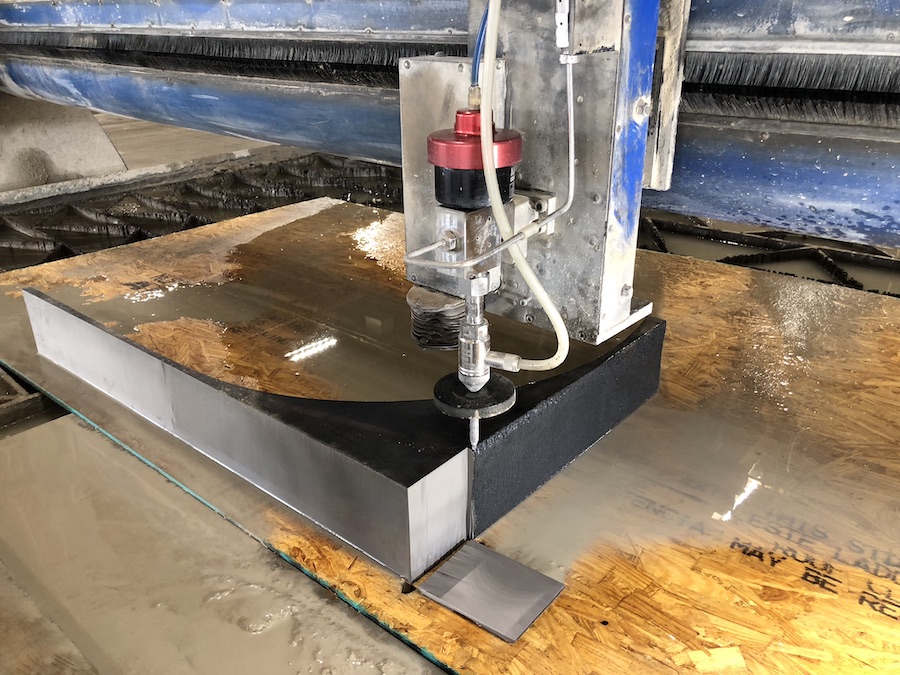 To cut faster and cleaner with a waterjet, why not just pump more abrasive through a larger orifice while adding more water and horsepower? The answer, as it turns out, is that you might not get what you’re expecting. And, on top of that, it’s going to cost you more.

So, for those running an industry-standard 55,000- or 60,000-psi pump on a waterjet machine looking for more efficient production, pushing more consumables through the machine is a common bit of advice that they can now avoid. The answer is a higher power pump that increases pressure to 90,000 psi.

Daniel Breazeale, CEO at Superior Waterjet Services in Chesterfield, Mich., laughed when he first heard about waterjet technology some 35 years ago. He was working at his father’s brake remanufacturing business when he saw a magazine article about machines that could cut steel with water.

“It’s actually pretty ironic,” Breazeale says of his disbelief. “Because, as it turned out, cutting steel with water is a big part of my success in business.”

Before his foray into waterjet technology, Breazeale did a little bit of everything around his father’s shop, American Brake and Clutch Inc., including a lot of purchasing. One of the parts that was outsourced – at considerable cost – would often fail, leading to customer complaints. Being mechanically inclined, Breazeale got the idea to branch off from his father’s business and create his own. So, he set up a small operation in his garage and began producing the part more reliably.

“That was in February 1988,” he says. “I saw the opportunity to make money and service my father’s company and customers. It worked out well for everybody.”

Breazeale’s company began to grow over the next decade-plus, and he gained the attention of OEMs in need of friction products, which are parts most often associated with clutches and brakes for automobiles. He knew he couldn’t meet the tolerances required with his existing equipment, which included a bandsaw that cut parts that required a lot of secondary work to finish. Experiencing inconsistent results, he began to research the waterjet technology that he had laughed off years earlier.

“The main reason I decided to use a waterjet was because the friction materials we were cutting would catch fire with a laser or plasma,” he said. “Waterjet was the only way to cut the parts.”

Furthermore, Breazeale says the only way he could achieve the consistency needed to keep the OEMs interested in doing business with him was to use a waterjet, so he picked up a 4-ft.-by-8-ft. machine. And even though it was small, it became a curiosity to customers visiting the shop to place orders.

“They started asking if we could cut this and that,” Breazeale said. “Over the period of about a year, I was cutting stuff for everybody and noticing I didn’t have enough time to get my own stuff done. That’s when I realized I’d kind of started something small that could grow into something big for the future.”

Over the years, Breazeale’s business grew and filled larger spaces as he added more and larger waterjets until he was up to four machines. By the time he moved into the 50,000-sq.-ft. building in 2017, he had caught wind of KMT Waterjet Systems’ new 90,000-psi pump and began to investigate it. KMT has produced 90,000-psi pumps since 2009, but the latest version’s advancements include a durable metal-to-metal seal design, which is guaranteed for 500 hours of operation.

Since his early 20s when Breazeale started his own business, he has been committed to investing in it to “make sure we have the best equipment.” When it came time to choose a name for his business, he looked around his office and a map on the wall caught his eye. Being smack dab in the middle of the Great Lakes, the name Superior jumped out at him and it just made sense to call his company Superior Waterjet Services.

“It’s funny because here’s Lake Superior, which is totally water related,” he says, “and I thought, Superior makes sense. People expect you to be good if you’re ‘superior.’”

The desire to be superior quickly extended beyond the name of the company. Breazeale was focused on seeking out more information about what was being called the fastest water cutting technology available. Therefore, he reached out to KMT to find out more about the company’s latest 90,000-psi pump. And because Breazeale was no stranger to smart investments and better technology, he bought two. It took a day or two to install the pumps in the new facility, but as soon as they were up and running, he ran the maiden material through one: 3/8-in. end bar steel.

“It cut at almost twice the speed we were used to,” Breazeale says. “Within 10 min., I knew we had made the right decision.”

KMT’s Streamline Pro III Series includes the 90,000-psi pumps that Breazeale was so impressed with, which are available in a 60- or 125-hp configuration. These pumps represent a line of “ultra-high-pressure” products from KMT, but the company also manufactures 60,000-psi pumps in 30-, 40-, 50- and 100-hp models.

Since 2009, when KMT successfully launched the Streamline PRO pump (90,000psi), the company has made many advancements, including improvements in the new metal-to-metal seal design, which is more durable and shows no wear in the high pressure cylinder bore. The SUPRALife seal is guaranteed for 500 hours.

For businesses like Breazeale’s, KMT reports that the new 90,000-psi pump can increase cutting productivity by 50 to 70 percent compared to the industry-standard 60,000-psi pump. Breazeale backs up that claim and then some. From his experience, productivity has gone far beyond KMT’s estimation – especially on thinner gauge material.

Another perk to using a 90,000-psi pump is that the higher pressure means less abrasive and water are used. There is also an optimized taper, which means fewer kerf issues.

“It produces a very narrow kerf,” Breazeale says. “Trying to keep a good focused stream to hold tolerances is something we’d struggled with for the entire 18 years we’ve used waterjet machines. Today, however, the taper is much less – even on thicker materials.”

Breazeale says that the team at Superior Waterjet Services went from operating their former pump at 100 hp to operating the current, high-pressure pump at 60 hp and running it fewer hours per day because of its speed. He confirms that they’re using less abrasive/garnet and less water, which means they’re able to pass down those savings to their customers.

According to KMT’s comparison between 60,000- and 90,000-psi pumps cutting 1-in. aluminum, productivity is improved, which leads to lower cost per part. This is due in large part to cutting time and the amount of abrasives required to make faster cuts. For example, a typical 60,000-psi pump can cut 1,000 parts per day compared to 1,500 parts per day by the 90,000-psi pump. In a year’s time, KMT estimates that the differences add up to nearly $35,000 in savings.

For Breazeale, these savings matter, but he’s also happy to be able to fill orders faster.

“My customers appreciate that, as well,” he says. “We’ve always had good lead times, but we’ve gotten some tremendous praise for being able to provide delivery in tight situations.”

As for the increased cost of a 90,000-psi pump, Breazeale says that while it might seem significant, companies like his can see a return on investment in as little as six months.

“Everything about the upgrade made sense from a business standpoint,” he says. “Any time a business can save 10 to 15 percent, it’s something they should consider. But, when you’re looking at savings of 50 percent, like we are now, it should be a no-brainer.”