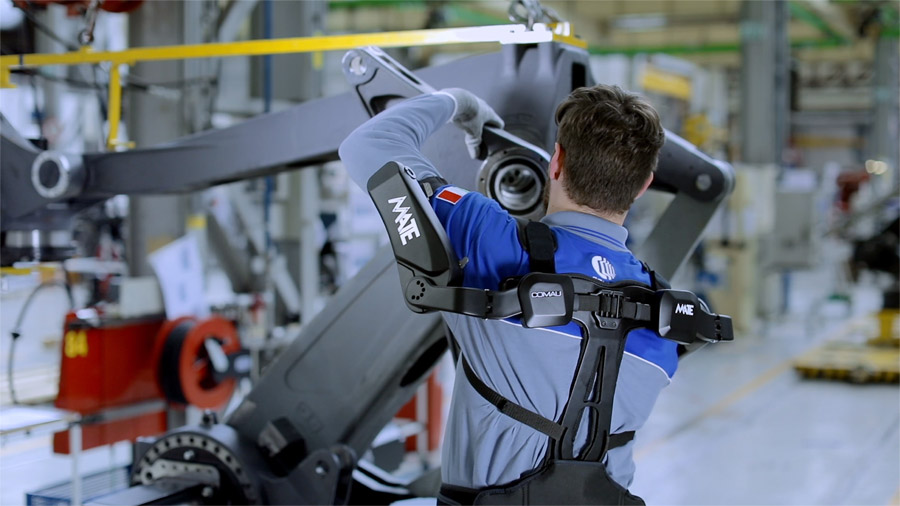 Without his special suit, Tony Stark would be just another average, run-of-the-mill billionaire. With it, though, he becomes Iron Man, founder of the Avengers and defender of all things good. To say the least, he might not be as effective in his superhero pursuits without his impressive set of armor.

Although Comau’s new muscular aiding tech exoskeleton (MATE) might not come with any special powers, the wearable technology does empower users as they go about performing their daily tasks. Its ergonomic design eases the side effects of repetitive movements so often encountered in industrial manufacturing environments. And while it might not help a user to save the universe from the forces of evil, the shoulder support it offers reduces muscular and cardiac fatigue, improves posture and enhances overall job quality.

The MATE was officially introduced to the North American market earlier this year at the Automate trade show in Chicago. Attendees had the chance to try it on for size. The device is lightweight and worn similarly to how one might wear a life jacket – it fits over the shoulders and is secured in front around the waist. It’s available in two sizes, small/medium and large/extra-large, and adjustments can be made at the back for a better fit around the shoulders and on the torso. Some described the sensation of wearing it as having their arms resting on an invisible table.

“When your arms are down by your side, there’s little to zero impact, but if your arms are extended straight out in front of you, 90 degrees from your body, that’s where you’ll feel the maximum amount of support,” says Mark Anderson, Comau’s head of robotics and automation products, North America. “As you raise your arms overhead, the torque slowly starts to decrease and fades to about zero when the arms reach around 120 degrees.”

The development of the MATE was in response to one of the industry’s most prevalent challenges: the aging labor market and the growing demands being placed on the workforce. To address the issue, Comau partnered with an Icelandic non-invasive orthopedic company, and a company specializing in wearable technologies. The collaboration, which included Comau’s aptitude in the industrialization and commercialization of things, resulted in an easy-to-use product that eases the side effects of repetitive motion through postural support.

“We took the best minds from the best areas to develop a product that we think is best suited to provide assistance to people that need help with repetitive tasks,” Anderson says. “We designed it to be noninvasive and simple to use. It utilizes basic mechanical engineering science coupled with our partners’ expertise, making it effective and comfortable to wear. The device is an upper-body passive unit, so it doesn’t employ any motors, sensors, cords or cables. It’s an advanced mechanical device.”

When asked about how it works, Anderson simply says, “like you do.” It is designed to move and flow just like the human body moves and doesn’t restrict the user’s range of motion. It provides under-arm support, assisting the arms when they’re in an upward motion, shifting the load from the user’s shoulders down to their core.

“Using Comau’s industrialization product development processes, we went through an iterative design process to make sure it was ready for market,” he says.

Being owned by Fiat Chrysler Automobiles (FCA), Comau’s roots are firmly planted in the automotive market. Therefore, the company fully understands the rigors of the automotive manufacturing environment and designed the MATE with those demands in mind.

Anyone who has seen an automotive assembly line knows just how taxing the work can be. But for anyone who has not witnessed underbody assembly work, imagine screwing a light bulb into a ceiling fixture. And then imagine doing that a thousand times each day.

In automotive assembly lines, employees are often positioned below the vehicle to perform overhead tasks, such as securing fasteners or snapping fuel lines into place. Raising their arms over their heads repetitively day after day puts a major strain on their shoulders and backs, causing them to be prone to injury and fatigue.

Thanks to the support offered by the MATE, employees experience less pain and gain increased stamina. Unsurprisingly, those results are beneficial to individuals in a variety of industries beyond automotive. Comau has received interest from a wide range of companies, including those involved in packaging and stock management. Interest is also pouring in from distribution centers and other manufacturers that task their employees with repetitive work.

Reducing the costs associated with back and shoulder injuries is significant, but the MATE can also deliver on other cost savings, especially those regarding hiring and recruitment. In positions that require repetitive overhead work, such as the type seen in automotive assembly, high turnover rates are not uncommon.

The goal of the MATE, however, goes far beyond financial considerations. When an employer invests in wearable technology like the MATE, it sends a clear message to employees.

“It tells your workforce that you care about their well-being and that you’re trying to come up with new ways to ease the heavy burden of repetitive work,” Anderson says. “In terms of employee engagement, end goals include higher staff retention, more productivity and, ultimately, happier employees.”

During the development of the MATE, Comau focused on its three pillars of innovation. All products designed at Comau must be easy to use, add value to pre-existing customer solutions and enhance how humans interact and collaborate with machines. Clearly, the MATE fulfills all three while also opening new doors for the company.

“It’s the first wearable technology we’re able to sell directly to the public,” Anderson explains. “We’re not selling a massive system or a solution in huge volumes. We can sell just one to a customer or 1,000. It allows us to think and market in different ways and, ultimately, help people, which is exciting for us.” 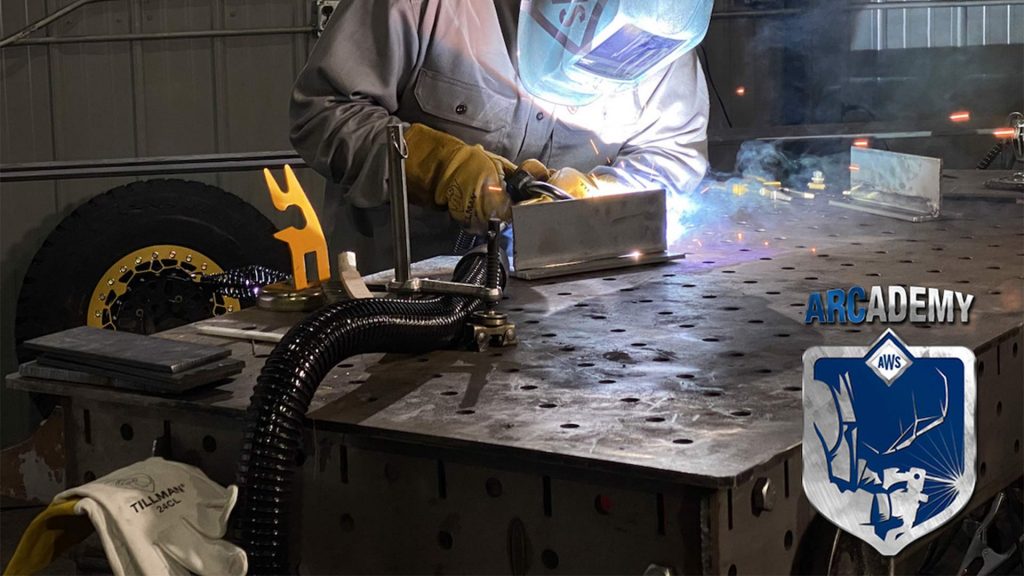 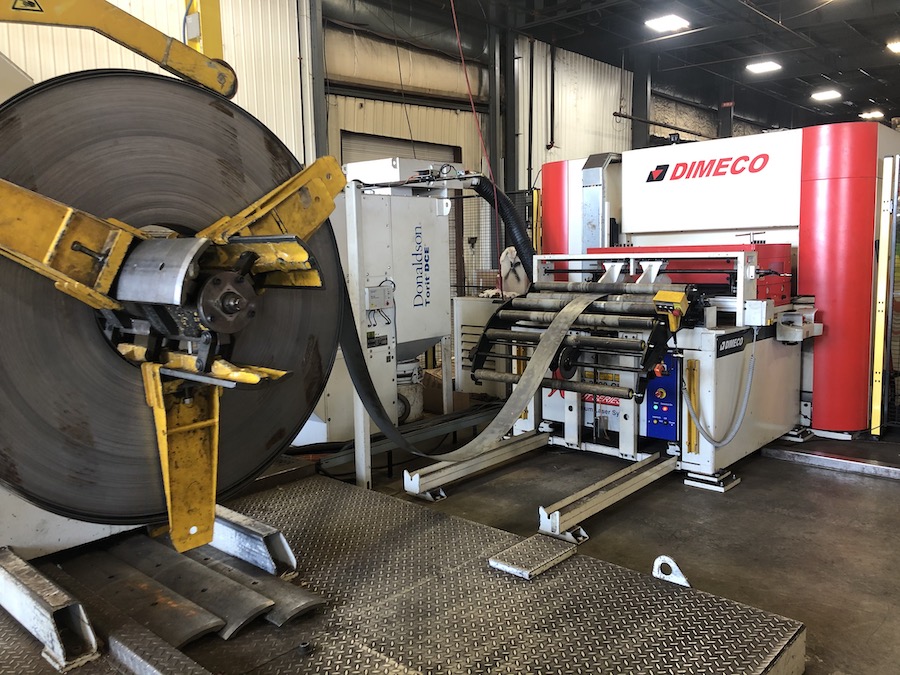