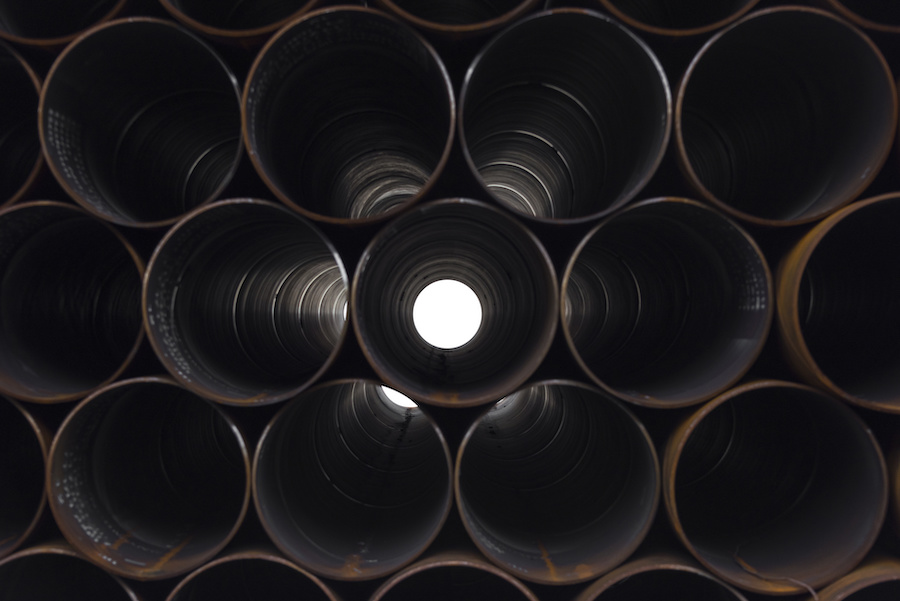 As with most machining and fabrication operations, there’s not much difference between laser cutting very large tube-shaped workpieces versus those that are much smaller. Yes, the machine tools are more massive and the lasers are more powerful, but the actual process? It’s technically the same. There are a few exceptions, however, as outlined by experts from Trumpf Inc. and BLM Group USA, two leading machine tool builders in the laser tube cutting market.

For starters, BLM’s LT14 and LT24 Lasertube machines (covering diameters up to 355 mm [14 in.] and 610 mm [24 in.], respectively) operate far differently than a “traditional” laser tube cutting machine, according to Lorenzo Carminato, business development manager.

“Both are equipped with a tail carriage and two spindles to position and support the workpiece,” he says. “Further, the laser cutting head articulates on a 5-axis module and is capable of carrying out most cutting operations with the workpiece held in one location, guaranteeing greater part accuracy. To minimize and even eliminate remnant scrap, the machine can process between, in front and behind the spindles.”

Because larger, thicker tubes usually suffer from twist and bow, Carminato explains, BLM equips the machines with an integrated measuring system to counter it. This measures the workpiece ahead of the cutting process and automatically adjusts the cut path to ensure accurate geometries and that parts meet tolerance requirements. There’s also an optional drill/tap unit, eliminating secondary operations and additional handling of large, bulky components.

“Changes of diameter, thickness or shape are all handled automatically,” he adds. “No additional tooling is needed to switch from one tube shape or section to another, which provides tremendous savings compared to conventional manual tooling changes. Further, part quality is no longer dependent on the operator’s setup skills, freeing them to focus on the cutting process.”

There’s more to the XXL equation than large tubing. Carminato notes that manufacturers producing parts such as those for agricultural and mining machinery, truck trailer frames, structural and architectural uses, water treatment, oil rigs and irrigation equipment often need to cut shapes beyond round tubes. These include H and IPE steel beams as well as the UPN and L-shaped profiles typically used in structural applications.

Regardless of the material profile, the Lasertube’s 3-D cutting head works perpendicularly to the beam surface or can cut at an angle. Also, the tilt cutting function is useful for creating the chamfers and semi-chamfers needed for weld prep.

“The laser guarantees maximum accuracy and avoids the need to rework the cut edges before welding,” Carminato points out. “Companies that process material diameters this large are looking to simplify and optimize the entire production process. Laser cutting not only consolidates multiple operations that would typically require multiple setups and additional handling, but it also improves part quality and reduces costs.”

Thomas Burdel, account manager for tube laser systems at Trumpf, agrees, noting that Trumpf’s TruLaser Tube 5000 Fiber and TruLaser Tube 7000 Fiber address these and other XXL tube cutting requirements without difficulty. He’s quick to point out, however, that bigger tubes are easier in at least one respect.

“Unlike flat sheet laser cutting, the concern becomes one of heat buildup inside the tube, which becomes more problematic on small diameters or in tubes with relatively thick walls,” he says. “To counteract this, we recommend using nitrogen as an assist gas whenever possible because it has more of a cooling effect than oxygen or compressed shop air.”

Another difference between laser cutting of flat sheet and tube is the possible variance in material thickness. This is not the case with round tubes, but square tubes, channels and beams are generally thicker on internal corners.

“The challenge is more with materials like aluminum extrusions where you have sharp external corners,” Burdel says. “But, as with the heavy walls found in C-channels and other structural steels, it isn’t really an issue as long as you can control the beam parameters as you ease into and out of those corners. The Trumpf disk and fiber laser are well equipped in this respect and can even control the beam diameter on the fly.” 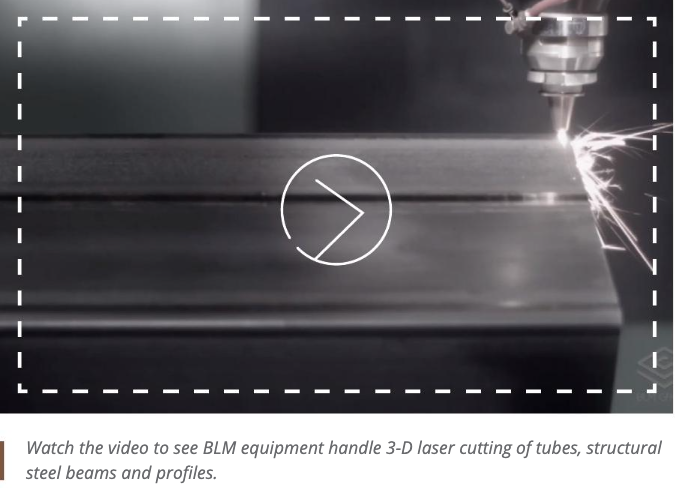 Both machine tool builders boast another interesting technology that’s useful to shops cutting lighter gauge tubes with up to a 3-mm (0.12-in.) wall thickness. In Trumpf’s case, it’s called RapidCut, and as its name implies, it works by rapidly oscillating the laser cutting head back and forth in the X-axis (longitudinally). According to Burdel, this speeds hole-making operations and contour cutting by up to 30 percent. BLM Group offers a similar technology, called Active Speed, although Carminato points out that in the XXL tube world, it’s rarely used due to the relatively thicker walls.

On the programming side, here again, tube is tube, with one exception. Burdel generally recommends offline programming and nesting to all his customers – tube and sheet alike – but says that this is especially important to those working with large workpieces.

“These machines typically have an automatic loading system, which allows you to load bundles of material directly from the mill,” he says. “The difficulty is that a tube might vary by as much as a foot in length. We solve this by measuring and identifying each piece of material, sending that information to our dynamic nesting software and then applying those values in the program based on what length of material is being loaded into the machine.” 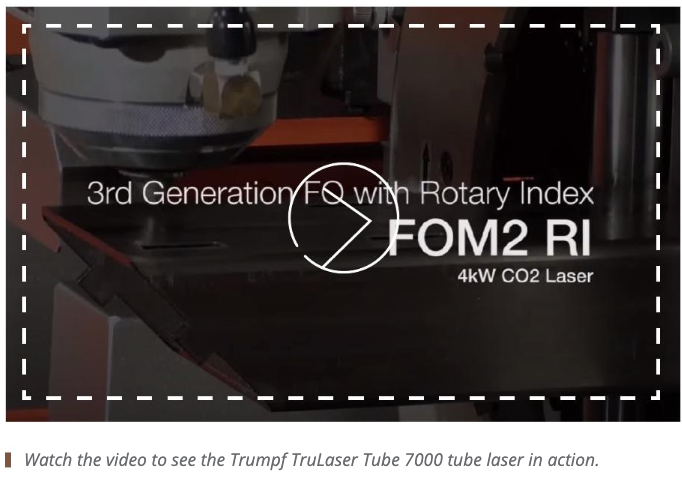 Carminato agrees. “With the BLM software, the user can program the part offline and create nesting on the fly after the raw material length measurements. This minimizes scrap and leftover material. For larger production lots with consistent material supply, the nest can be generated offline to maximize material utilization.”

The final elephant in the room is the type of laser. Without going into the merits of one brand versus another, it’s important to note that each manufacturer offers both CO2 and solid-state (fiber or disk) lasers on their tube cutting machines.

As with flat sheet laser cutters, Burdel and Carminato agree that most shops favor the fiber due to its higher performance and lower maintenance costs, although Burdel notes that those producing food and medical equipment often prefer CO2 for its ability to generate slightly better surface finishes. Either way, both companies stand ready to solve any XXL tube processing needs.