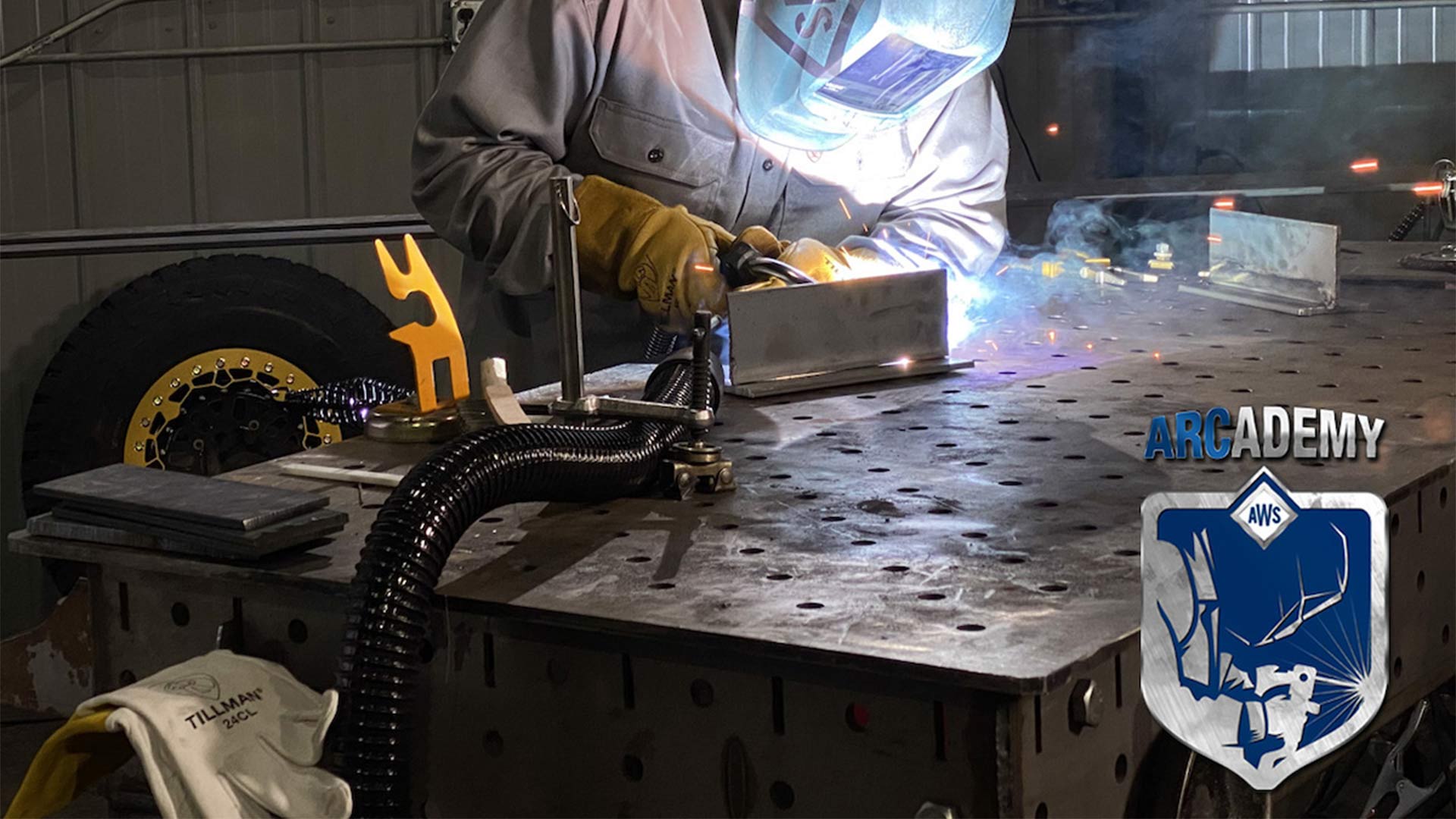 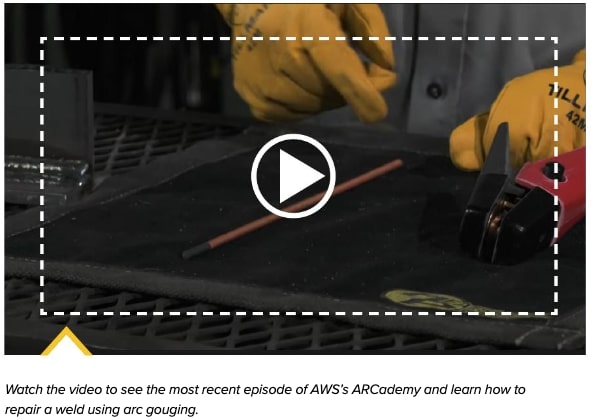 A search on Google for “welding videos” produces more than 45 million results. It’s solid proof of the growing popularity welding has achieved over the past decade, but it also presents a challenge to those looking to enhance their welding skills: determining which videos – out of millions – that can legitimately help.

Some videos have tons of views and high production value, but they focus more on those flashy stacked dimes than the process required to achieve them. Many lack proper safety protocols and still others use improper terminology, which is a major disservice to those aspiring welders that are preparing for an American Welding Society (AWS) certification exam or heading into a job interview.

With a mission to support current and future welders in their career ambitions, AWS launched ARCademy, a video series that is dedicated to improving the safety and skills of new welders. By leaning on AWS, welders can cut through the overwhelming number of welding videos found online to get the advice and guidance they need to further advance their careers.

Topics in the ARCademy series cover everything from different materials and welding processes, like flux-cored arc welding, to PPE and oxyfuel cutting with acetylene gas. 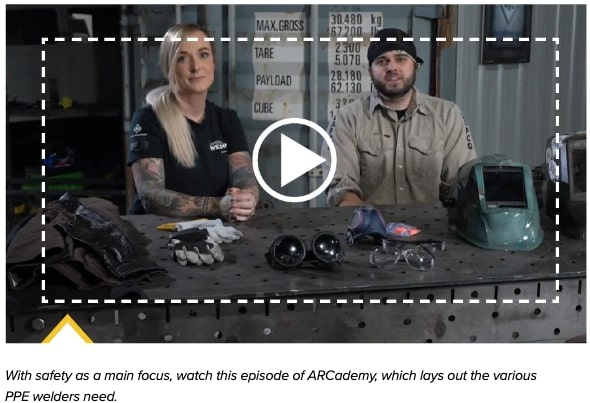 The ARCademy series can be found and subscribed to on YouTube and is described on the page as “the go-to resource for those interested in taking the steps to educate themselves towards a welding career.” Hosted by Joe Young and Stephanie Hoffman, both program managers of workforce development at the AWS Foundation, the ARCademy channel currently offers 13 videos to view for free with more planned in the future. Young, who is a former welding instructor, says ARCademy is something he’s very passionate about and something that the industry needed.

“The goal is to highlight some of the basics of welding and run through the gamut of all of the welding processes from a video standpoint,” he says. “In addition to giving a basic fundamental level of welding education, we’re also tying it into the wealth of information that’s available on the AWS website.”

Young goes on to explain how conscientious the team at ARCademy is about the terminology that’s being used in the videos and where viewers can find more info about those terms and the processes that are laid out. At the end of each video, Young points back to the specific standard the industry follows and relates it back to topic that was covered in the video.

“At AWS, we want to make sure that we’re using the correct terminology that’s sanctioned by the industry,” he explains. “In a video, we could say, “hey, we know this process is known as TIG welding, but we also want everyone to know that it’s formally known as gas tungsten arc welding.”

Including the formal names and definitions of terminology included in AWS standards is a core piece of the ARCademy videos and one that serves as a major differentiator to the other welding videos found online. Undoubtedly, introducing new welders to professional terminology early on can greatly enhance their opportunities for career advancement in the future.

“The goal was to give that entry-level exposure,” Young says. “The way I like to phrase it is that we’re giving you enough exposure so you can make it work. Would I feel comfortable taking you out to a job site and shooting X-rays at your welds after only watching one video? Maybe not. But would I feel confident that you could safely turn on your equipment to join two pieces of material and then hone your skills with future videos? Absolutely.” 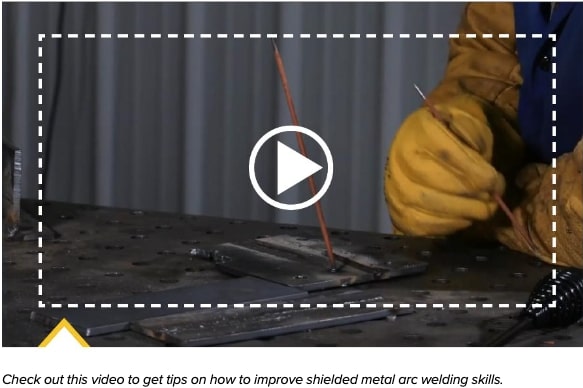 Coming from AWS, it should come as no surprise that the first order of business is always education. And that definitely holds true with the ARCademy videos, no matter where the viewer is physically or professionally.

“Depending on where you live regionally or what processes you’re familiar with, you might gravitate more to some of the videos over others, but the tie that binds is that we’re really focused on that entry-level exposure, giving you just enough of those good terms and definitions to help you make informed decisions,” Young says. “But from the beginning, we also had to focus on engraining the idea of safety into these videos.”

Young goes on to lament the number of incidents that still happen in today’s day and age.

“It’s quite appalling actually that people are missing simple key safety items,” he says. “I don’t know if they’re overlooked from an organizational standpoint or if it stems from some of the content that people are ingesting, but simple mistakes can be a life-or-death situation.”

Safety at AWS is an incredibly serious topic of conversation and focus. It’s something that the organization constantly stresses no matter what a welder is doing. Young wants new and experienced welders alike to always have safety protocols in the back of their minds.

“Even if you’re not a welder, but you’re around it, you need to be aware of your surroundings, the hazards that are present and have those safety precautions in mind,” he says. “Safety was absolutely woven into all of our videos. To do that, we leaned on the Z49.1 standard. We cite the standard or sections and tables from it to inform ARCademy viewers that there are safety resources available to them.”

The safety standard Young refers to is ANSI Z49.1, Safety in Welding, Cutting, and Allied Processes, which is free to download on the AWS website. Since its introduction in 1944 as a response to the huge demand for war materials production, it has been revised multiple times, resulting in the current 2021 version.

While the ARCademy videos place high priority on including proper terminology and safety practices in each episode, Young and his co-host Hoffman inject plenty of tips and tricks into the mix. After all, the goal is also about helping welders get better at their trade.

“A main goal for me, personally, was to highlight the different materials, joints and techniques that I’ve seen in my times and trials in the industry,” he says. “Whether it’s tackling a stringer bead or how you position your body, these were things that I wanted to convey as an instructor. Everyone is going to see the molten puddle a little differently, but if you can give someone the quick tips of what to look for or how to manipulate their arms, for example, that can carry folks into their craft a little bit further.”

So clearly, the ARCademy series runs the gamut and because it’s coming from AWS, viewers can trust the content. The types of viewers AWS hopes to help come from all walks of life.

“It could be someone who just wants to polish up their skills and be a little more informed about various processes,” Young says. “Or it could be a home welder that wants to learn the basics, or perhaps a student that is struggling in class. The audience is the folks that are hungry for more knowledge that want to better themselves. They’re after that because they want to be better at welding.” 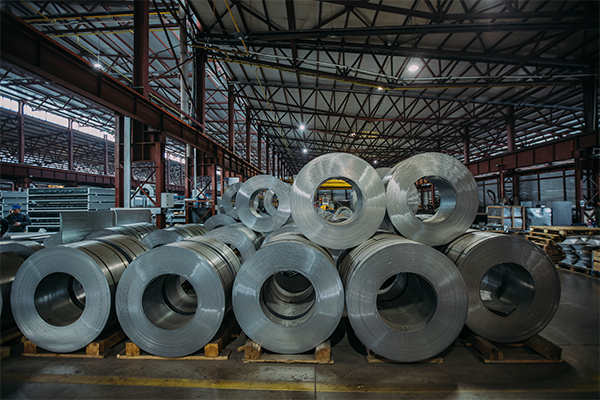