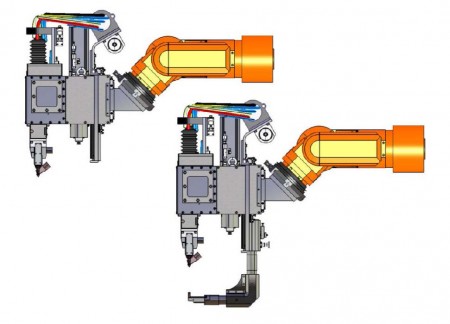 At a recent IPG Photonics open house in Novi, Mich., Mike Klos, general manager of IPG’s Midwest operations, lamented the dwindling attention span in America. According to a “disturbing” news story he’d heard, eight seconds was the extent of time that Americans could apparently concentrate on something. To put things into perspective, he checked into what could really be accomplished in that amount of time.

“If you’re a rodeo rider, eight seconds is an eternity,” he said. “It’s also the maximum amount of time that people will wait for a website to load before they get upset and have a bad impression. The eight-second rule in the NBA is the amount of time to get the basketball to the opponent’s side. Eight seconds is considered the allowable time for your elevator pitch before it gets awkward. And it’s the eight seconds of eye contact in every 80s movie that will either result in a kiss or a fist fight, or if it’s a Sylvester Stallone movie, a gun fight.”

Eight seconds, he said, is also double the time it takes to see first-hand the advantages brought to sheet metal welding when leveraging IPG’s laser seam stepper, which was recently introduced to the market.

The cutting-edge laser seam stepper, or LSS, combines the advantages of resistance spot welding and fiber laser welding. The differentiator comes from its integrated clamping technology, which heralds a clamping force up to 3.0 kN or 750 lbs. This configuration brings laser welding into the automotive arena in certain applications where resistance spot welding has traditionally been used such as with high-strength hot-stamped parts.

When implemented in place of resistance spot welding, the LSS offers users significant improvements – both technical and economic improvements. Automotive parts producers will see better crash test and strength results and can also realize a decrease in cycle times by 50 percent. In a production setting where, for example, 800 or more units are manufactured in a three-shift operation, cost reductions can be as much as 10 percent.

Much of the improvements come from the inherent benefits offered by laser welding. It introduces much less heat to the work surface compared to traditional welding methods. The low heat input reduces the possibility for degrades in the material’s microstructure. The process also allows for deeper weld penetration as well as high travel speeds.

“The benefits of the laser process also include no marring of the backside for Class A applications,” says Eric Stiles, IPG Photonics applications manager. “Additionally, with laser welding, only single-sided access is required. Furthermore, its capability for deep penetration welds enables 3T or 4T welding.”

The LSS has a compact footprint, laser power up to 4 kW, integrated chiller, air management and process diagnostics. The design is available with a C-gun or a picker. The laser is a Class 1 device, with no laser cell required.

To suit various needs, there are a handful of versions of the LSS. Version one is currently in use at three companies. Fully automated, the weight of the seam stepper head is 39 kg. The clamping unit is electric motor driven.

The optimized second version is currently in tests with two companies. The goal of its development was to lower operating costs. The third version is the manual hand-held device for use in batch production. Its control is a touch panel and it comes with an integrated stepper control as well as a monitor for laser power. External cooling is required, and its energy efficiency is approximately 36 percent.

“The handheld version was conceived for low volume or prototype shop applications,” Stiles explains. “Because it can be operated by hand, it’s highly flexible. The standard version is intended for mounting on a robot and being automated.”

There is also a version with an optimized controller that is more compact than the first iteration of the LSS. Finally, there is a laser spot welding system that is in the R&D stages.

No matter the version, the LSS is powered by a fiber laser source. According to Klos, fiber laser technology is the best choice available.

“In the last five years, we’ve gone from people saying CO2 lasers will never stop being the premier generator for flagship cutting to now where more manufacturers are committed to using fiber optic lasers,” Klos says. “They cut faster, require less maintenance and you can do more with a fiber laser.”

He adds, “there are no moving parts and no mirrors. It is the best power source as there are no laser consumables, no simmer state, no purge gas and no scheduled technical visits necessary. It’s available in all power levels that you could want. It’s just hands-down the better choice.”

In addition to automotive applications, the LSS would benefit various production environments where baffles, railway vehicles, appliances and steel furniture are being made.

No matter the application, the overall efficiency of the LSS will be apparent as soon as it is put to use. At IPG’s open house, Klos put those benefits into perspective by offering up what he described as his eight-second takeaway from a spot welding seminar he recently attended.

He also reminded the open house visitors that the LSS is cost-effective thanks to the lack of expensive clamping tools required. It has twice the processing speeds of resistance spot welding, higher component strength and rigidity due to joint quality, considerable reduction of flange size and is a safe joining process – even with critical material combinations.

“It’s so easy,” he concluded. “You just hook the thing up and press the foot pedal.”

Video: Fiber optics lasers are eclipsing CO2 as the premier generator for flagship cutting, and IPG Photonics is at the forefront of that technology. Watch the video to learn more about the influence the company has had on the industry.  Click here to watch