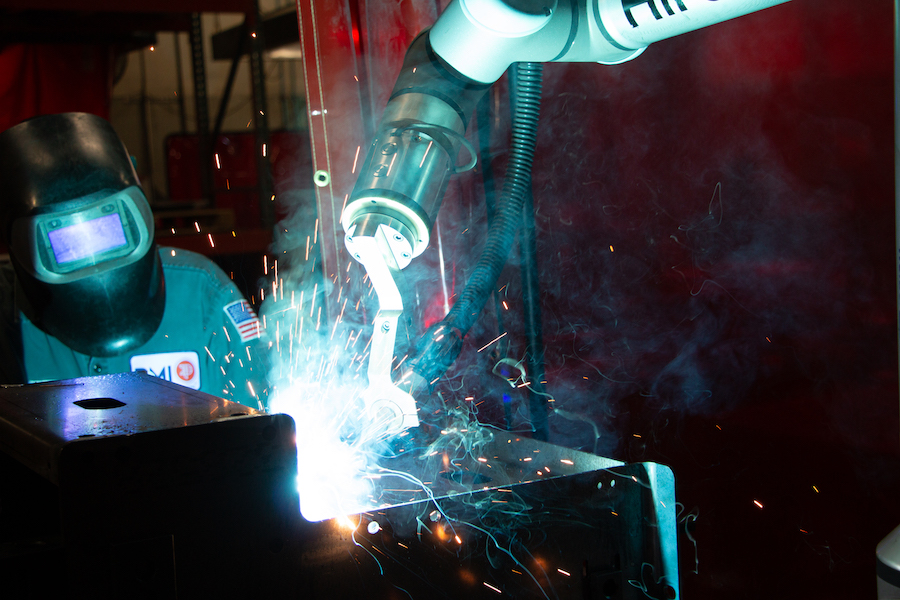 Wisconsin-based Processed Metal Innovators (PMI) LLC is a metal fabricator that produces hundreds of various stamped and welded metal parts for heavy equipment, automobiles, appliances and more. Part sizes range from a few inches to 10 ft., and from thin-gauge material to 3/4 in. and thicker.

With the labor shortage in Wisconsin making it tough to hire certified welders and with traditional robotic welders not feasible for its high-mix, low-volume production, PMI needed another option. The company turned to the cobot-powered BotX Welder to dramatically increase productivity and profitability.

Erik Larson, vice president of operations at PMI, was tired of turning business away due to labor shortages.

“There’s been a lot of business that’s come knocking on our door, and a lot of in the past as well,” he explains, “that we’ve had to no-bid because it requires welding. We only have about seven welders and for some of these jobs we needed nine or 10 welders. Right now, we have enough quotes out there that we would have to hire 30 more welders to complete the job.”

The company already uses two collaborative robots from UR to tend two mechanical presses. The cobots pick parts from a conveyor, place them in the presses for stamping and remove the parts to another conveyor. The cobots on the presses automatically pause when someone enters the workcell, proving to be safe and cost-effective, and allowing workers to move into higher value roles.

The cobots were implemented by Hirebotics, a UR-certified systems integrator that provides cloud connected robots that are billed hourly for the time they work, eliminating capital outlays and simplifying applications. That success led PMI to look for other applications to automate in order to keep growing the company. When PMI heard about Hirebotics’ new BotX Welder, the pieces clicked into place.

“We selected the BotX robots because they are collaborative robots and don’t need a large guarding system around them,” Larson says. “They’re very small, easy to use and easy to program. It’s a win-win package and it’s the future for doing small welds.”

The BotX Welder is designed for easy implementation and programming, and combines extensive welding expertise and two years of development collaboration with Red-D-Arc, Airgas and Air Liquide.

“Universal Robots is a great choice for this platform to be built around for several reasons. It’s an extremely open platform,” says Rob Goldiez, co-founder and CEO of Hirebotics. “It allows us to control how that robot performs from the cloud, and the new e-Series has unique capabilities in its built-in force torque sensor, which we heavily take advantage of to provide a better user experience for the end customer.”

Customers can teach BotX the required welds simply via the Hirebotics app on any smartphone or tablet utilizing welding libraries specifically developed for BotX.

“The Hirebotics team came in, they unloaded the BotX off of their rental truck, and within two hours they had it set up,” says Shaun Bruce, PMI’s robotics and automation area lead. “Within half an hour, I was running it and programming it and doing it all by myself. I’m not a certified welder, but I’m able to easily just load a program, and I’ve got my tables mapped out in pictures, so I know where to put my tooling and my jig system. I’m able to swap between parts within a matter of 15 min.”

A key concept of the BotX Welder is that there’s no capital investment up front. Hirebotics delivers and sets up the system and all the customer has to supply is gas and standard power. After a risk assessment, no special guarding is required, and the company pays an hourly rate just for the time the robot is actually welding.

“Compared to what a welder would get for their hourly wage,” Larson estimates, “plus all the overhead costs, you’re probably saving half of what you would pay a normal welder.”

The new welding robot system has already had an impact on the company’s ability to take on new jobs, despite the acute shortage of welders, Larson explains. “With the BotX system, we can quote work we haven’t been able to quote before, because we know by the time we accept the purchase order, we can get a robot in here and be ready to weld the parts before we even get the first order in the door.”

Larson adds, “With the new BotX system, we can bring in one robot and run it for three shifts and not have to hire three welders, so if we needed 30 welders, we could have 10 robots running. We’d have to hire employees to run the robots, but now they don’t have to be skilled welders. It really frees up a lot of resources for us.”

PMI also has traditional welding robots in house, but they require tooling fixtures that can take up to 16 weeks to be built. Especially for small-parts runs, PMI found that the fixtures weren’t cost-effective. Larson explains the difference with the collaborative BotX system.

“The tables that the BotX robot comes with include clamping systems and everything you need to be able to clamp your part on the table and shoot some pictures of it,” he says. “You have a little diagram of it and every time you go to put that program back in, you can set your part up the same as you did before, so it doesn’t take a large fixture or an expensive fixture to do it. There’s no capital investment in it. It’s just plug-and-play.”

In addition, any downtime on traditional robots could take up to two weeks to get a service tech to address. In comparison, the BotX system includes 24-hour service that responds with the touch of a button in the Hirebotics app. “You go on your phone, click the app, and they reply,” Larson says.

His colleague Bruce adds, “If I have any kinds of issues, I can message Hirebotics on the app and instantly get a reply back. It’s not hours or days of waiting; it’s seconds for a reply sometimes and for troubleshooting real-time, the problem is resolved within minutes.”

As in any weld shop, profit margin on the larger weldments is significantly bigger than on small welds.

“We can now reallocate our existing manual welders to handle the larger parts, while we’re still able to get the little parts done,” Larson says. “So we’re not replacing anybody in our company with robots; we’re just moving people around to where they add most value.”

The cobots tend to appeal to younger workers, who are often hard to hire and retain in manufacturing jobs.

“We found when we put these robots in and were looking to hire someone to be the robotic and technology lead person, we had a lot of younger employees all interested in applying for that position because they like their phones and they like computers,” Larson says. “It’s a big hit for the younger generation that is into tech and want to be able to work and program robots.”

While young people may gravitate toward using cobots, using them in this industry took some convincing, explains Hirebotics’ Goldiez. 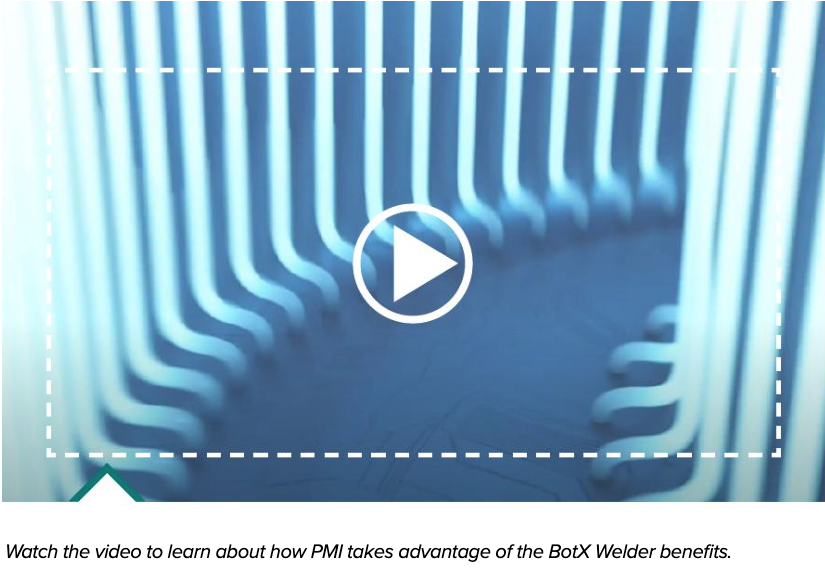 “Most people who have been around the industry for a long time believe welding, which is a heavy-duty task, is best suited for traditional robots,” Goldiez says. “They don’t think a cobot is up to the task. One of the first things we had to do was prove to our partners at Airgas and Air Liquide that a cobot can weld. That was proven resoundingly well, and it’s not just the motion of laying down a weld. It’s the robot laying down a weld and then cutting it and analyzing it and X-raying it to make sure it meets the standards that they would expect and want to present to their customer base.”

Once convinced, these expert partners played important roles in the BotX development and implementation.