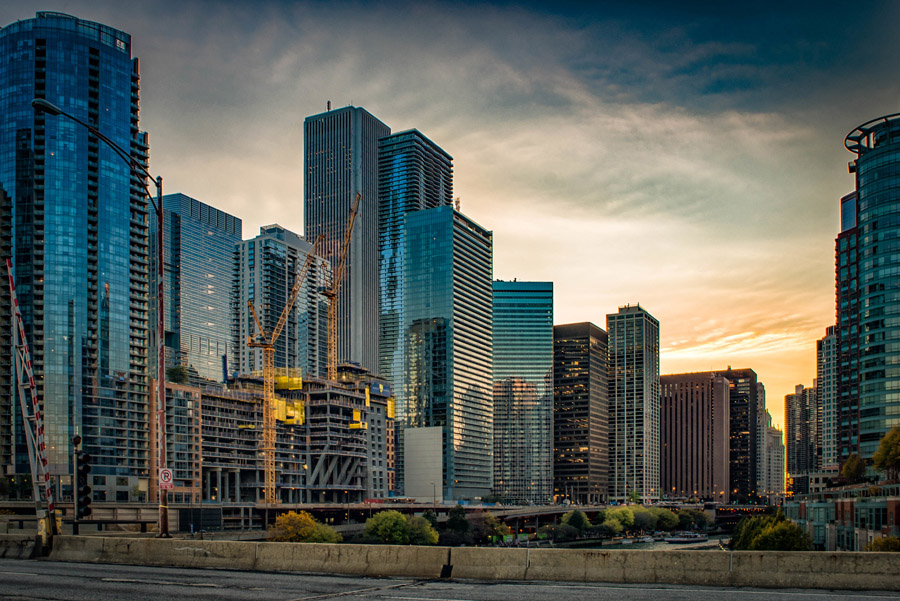 As summer turns to fall, the construction season begins to take a slower pace. At its height, however, more than 60 cranes could be seen hanging over Chicago’s downtown. The projects included high-profile construction, such as world-renowned architect Jeanne Gang’s Vista Tower, which will claim the spot of the third-tallest building in the city. They also included dozens of mid-rise apartments, a handful of other notable skyscrapers, high-rise hotels, educational properties and just about every single elevated subway station located in the heart of the city. 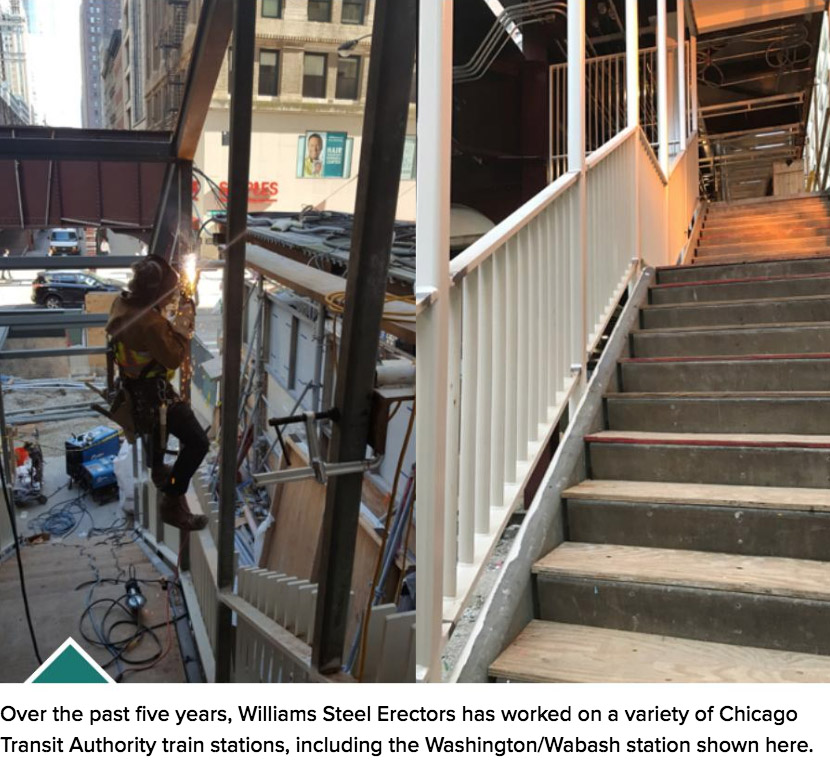 Often, the credit goes to the architects that design the properties as well as the politicians that woo investors into Chicago. The unsung heroes, therefore, are the folks that are on the ground – the construction workers that shape the metal, pour the concrete and, of course, operate those multi-story cranes.

Among those workers are the men and women from Ironworkers Local 63, an architectural and ornamental union that’s been shaping Chicago’s skyline since 1903.

As one of only three architectural and ornamental unions in the country, Local 63 represents the individuals responsible for creating some of the most standout features of a building. Curtain walls, steel stairs and guardrails, fencing, monuments and statues, as well as a multitude of metal details all give a building its signature look.

To produce these sometimes complex and ornate features, Local 63 prides itself on offering its members the most robust training available. They are, after all, cultivating some of the most skilled craftsmen the country has to offer. In terms of the welding skills that are required on the job, the union partners with the American Welding Society (AWS) to ensure its members are a cut above when it comes to stick, TIG, MIG and flux-cored arc welding.

Currently, Local 63 is comprised of more than 130 contractor companies that together total 1,100 active members with 360 of them being certified welders. Paul Thompson, union administrator, describes them as “confident in all phases of welding.” He adds that the union boasts four certified welding instructors, which is more than most other unions in the country.

“Our union is recognized by the AWS,” Thompson says. “We’re audited regularly and they do their due diligence to make sure that we’re doing everything in the proper manner – to make sure our program cuts the mustard.”

As an example of the union’s unmatched skill sets, Local 63 was tasked with constructing one of Chicago’s newer iconic art instillations: Cloud Gate, which is affectionately known to locals and tourists alike as The Bean.

“One of our contractors erected, welded and polished it to a mirror finish,” Thompson explains. “They tacked the stainless plates together and then used a special welder that was suction cupped onto the structure to do the actual welding. The guys did all of the polishing by hand. In fact, they built a tent to protect The Bean and worked around the year to finish it, even during bad weather.” 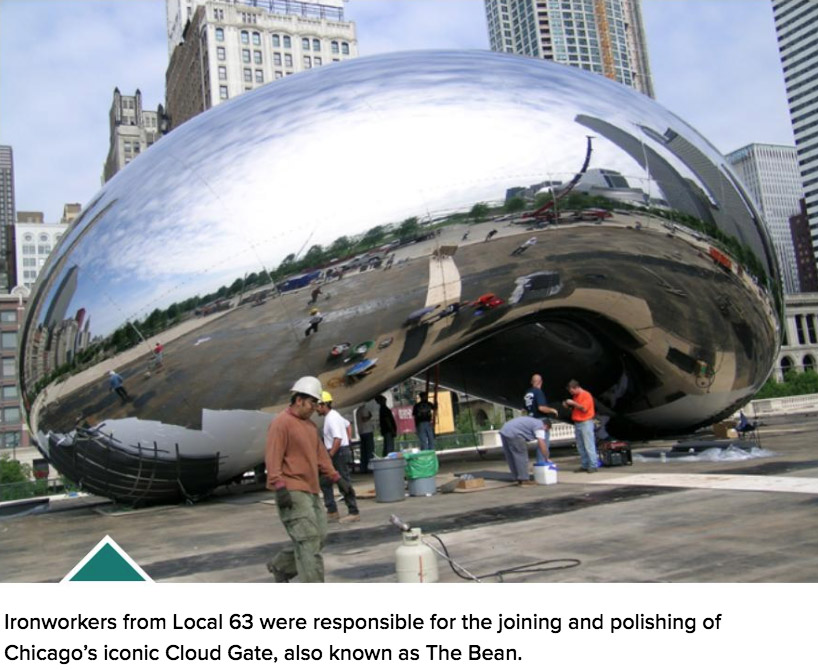 Even though the construction season slows down as temperatures drop, the contractor companies in Local 63 work throughout the year. When work moves indoors – be it during the winter months or once the exterior walls of a building are complete – member companies such as Williams Steel Erectors rely on equipment that can easily transition from outdoor welding to indoor welding.

At just 242 lbs., the Fusion 160 welder/generator from Miller Electric Mfg. LLC is more than 50 lbs. lighter than its heavier counterparts, meaning it can be moved around a job site much easier. But its portability isn’t the only benefit to contractors like Williams Steel. The welder can run off of gas engine power as well as 120/240-V utility power, meaning the fumes and noise associated with engine power aren’t a concern once welding activities move to a fully enclosed location. 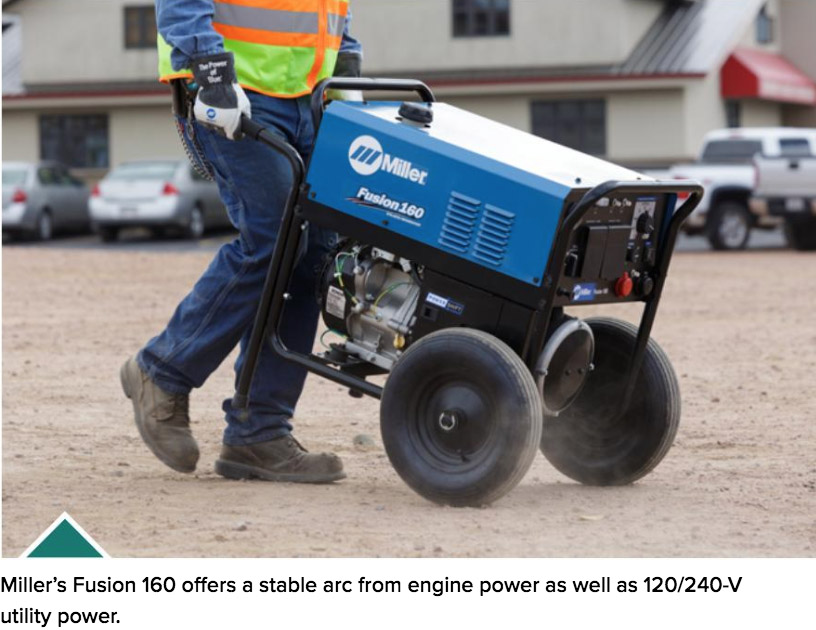 “All you have to do is plug it into the wall, and it welds just as good as when you started it in gas mode,” says Bill St. Louis, founder of Williams Steel. “And it’s especially helpful with a where you need to move it around a lot at the beginning or when everything is enclosed near the end of the job. When the windows are all in, you can easily shut the power off and plug it into the wall. It’s a huge benefit.”

Without the Fusion 160, a contractor would need two machines – one for inside and one for outside. Outside, the Fusion 160 engine can also generate 6,500 W of power to run electric tools.

St. Louis has been an ironworker for as long as he can remember. In his early days, he was always working under someone else, but 20 years ago, he decided to make a change and opened the doors to his own company, Williams Steel.

Since then, his business has grown substantially; he currently has 30 employees, and like his Local 63 brothers, he’s worked on a variety of high-profile projects in the Chicagoland area. St. Louis’ first project started with the construction of an Ikea store in Schaumburg, Ill., which led up to current projects, such as Northwestern University’s new practice field and, over the past five years, every single new Chicago Transit Authority train station that features an elevator tower.

Coming up, Williams Steel will tackle another downtown skyscraper, one that will reach 85 stories tall. Through it all, St. Louis has been loyal to the Miller brand.

“For 20 years, it’s been Miller, Miller, Miller,” he says. “We have to buy a lot of welders, considering the scope of work we do. And Millers, they run a long, long time.” 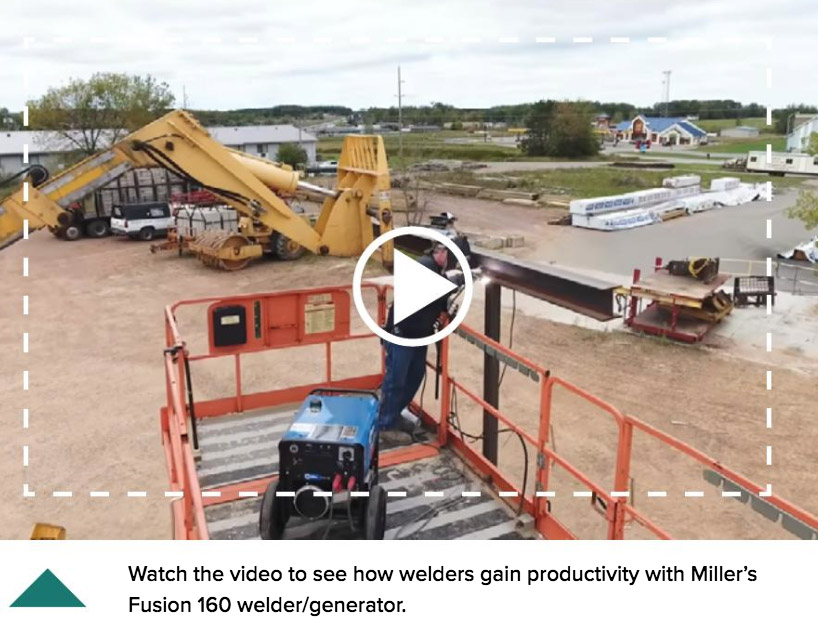 His latest Miller investment, the Fusion 160, has turned out to be his favorite Miller welder yet. Even though St. Louis wouldn’t ever consider another brand, his “traditional workhorses,” aren’t always perfect – at least not when compared to the 160. 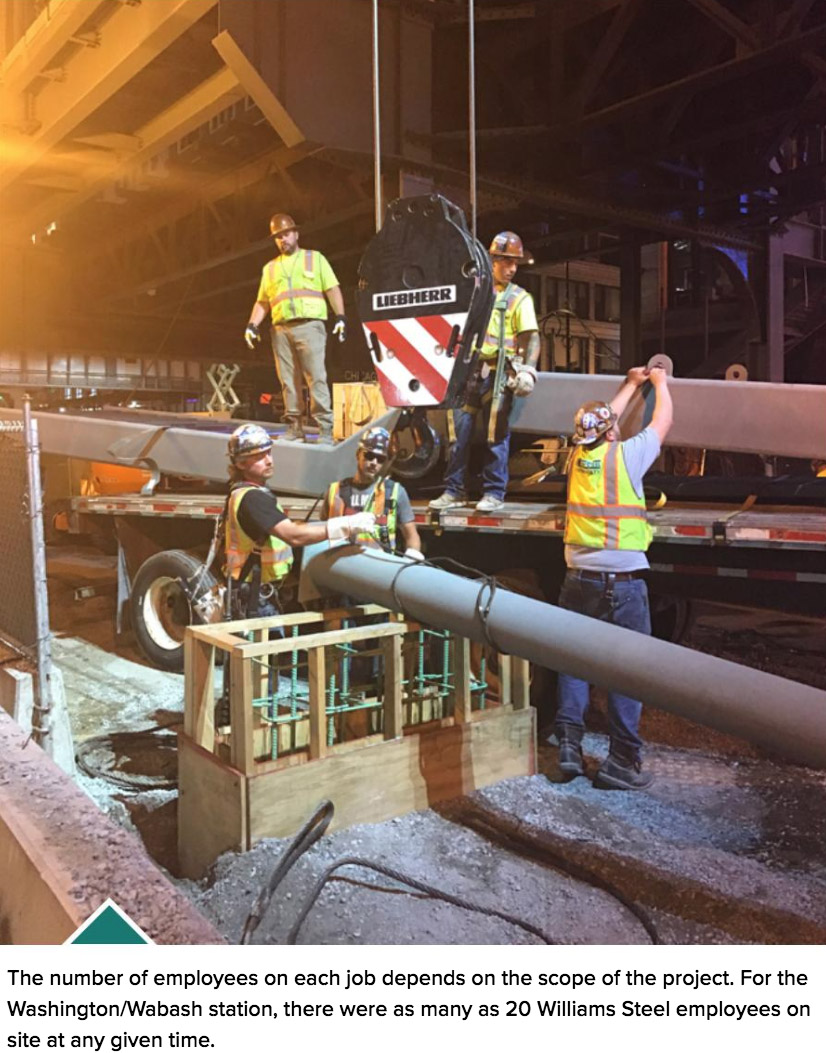 “So while it’s a gas welder, it can also be plugged into 220 V,” he says. “What’s also great about it is that it can replace the heavier welders that always have their solenoids going out and sometimes idle high. If it’s running on high idle and can’t be fixed right away, you’re going to beat it to death, and it’s going to beat the welder to death.”

Stable, smooth stick arcs are another big selling point for St. Louis and his team, which is made possible by the Fusion 160’s inverter technology. When welds are more consistent, welders have less rework and less cleanup to deal with, which leads to higher job-site productivity.

“On a job site, you rarely ever have perfect conditions,” St. Louis says. “You’re more uncomfortable than you are comfortable. The good thing about the Fusion 160 is that you can have a lot of lead-out and it runs the same. It helps those guys that are welding all the time to know that they don’t really have to mess with it. It’s that consistent.”