Fabricators and manufacturers are taking advantage of the higher processing speeds offered by advanced laser systems to expand their services. This includes processing thin-walled tubes and pipes faster than ever, from loading the raw material to cutting the parts to the final assembly.

Assembly of the parts is “an area where there is a huge gain in productivity for a shop,” said Mark Mercurio, applications and technical support manager for Mazak, when speaking about the company’s new 2-D Tube Gear CO2 laser-cutting machine, which has a stated tolerance of ±0.002 in. and a repeatability of ±0.0004 in. “Not only are the parts cut faster, but assembly and welding is much faster because the laser produces a more accurate, repeatable part.”

The Tube Gear processes round and rectangular tubes and pipes from ½ in. to 6 in. in diameter and up to 24 ft. long. The three most common materials for the lightweight tube market are mild steel, stainless steel and aluminum. The machine is targeted at a ¼-in. and under wall thickness because of the weight of the tube. “A 6-ft.-by-6-ft., ¼-in. wall bundle is about the maximum this machine can carry,” Mercurio said.

Triple the support
A key feature of the new machine is its triple-chuck system that minimizes warp and material vibration, allowing for higher accuracy and faster processing speeds compared to a double-chuck system.

“With tubing, you are supporting the workpiece in space and cutting around it, so holding the material accurately in place helps with cutting accuracy,” Mercurio said. “With the three chucks, you always have the workpiece supported down the centerline of the machine. You are always cutting close to one of the three chucks.” Most thin-walled tube laser cutters have two chucks.

In addition to gaining greater accuracy, fabricators and manufacturers are looking to reduce piercing times and improve cutting performance. The Tube Gear achieves this with its 5-in. Servo Focus torch, which is a hot-focused laser spot that produces typical pierce times between 0.1 to 1 second. “The 5-in. torch also allows for faster cutting feed rates in the materials mentioned,” Mercurio said. “Some feed rates can be up to 30 percent faster than those produced with a longer focus length lens.”

Like the Tube Gear, the Servo Focus torch is also new to the tube industry, although it has been used on Mazak’s high-speed, flat-sheet 2-D laser-cutting machines for many years.

Fabricators can also pick up the pace with the Tube Gear as it uses a Mazak/ Fanuc 31 IL control, which can read part geometries faster than Mazak’s older Fanuc controls.

Mazak TUBE GEAR 150
The Tube Gear can process tubes and pipes from ½ in. to 6 in. in diameter and up to 24-ft. long. The bundle material load/unload system allows for lot sizes up to 4.2 tons.

Operator ease
With the aim of increasing productivity, the Tube Gear’s multitasking 31 IL has the ability to process one tube while a part of the control is pre-staging the next one. “You are taking one new piece out of the bundle and gauging and measuring it so you know exactly where that tube is. When the current part in the machine is completed, you can very quickly put the next one in.”

If the operator wants one tube of a different size, the Tube Gear also features a bundle bypass system that allows him to easily put in the different size tube. The tube that was at the bottom of the pile is now at the top. After it is cut, the machine returns to the bundle production. “In today’s lean manufacturing environments, ‘hot’ jobs are a common occurrence that manufacturers of machine tools need to be aware of. We have to design a machine that can accommodate this type of scenario without complicated processes.”

The Fanuc control also allows the machine to be more operator friendly, Mercurio added. “The operator can see what his cutting parameters are visually without having to know much about the code running the machine.”

To further improve efficiency and minimize required floor space, the Tube Gear’s design positions the loading/unloading and laser operation on the same side of the machine. The bundle material load/unload system allows for lot sizes up to 4.2 tons. 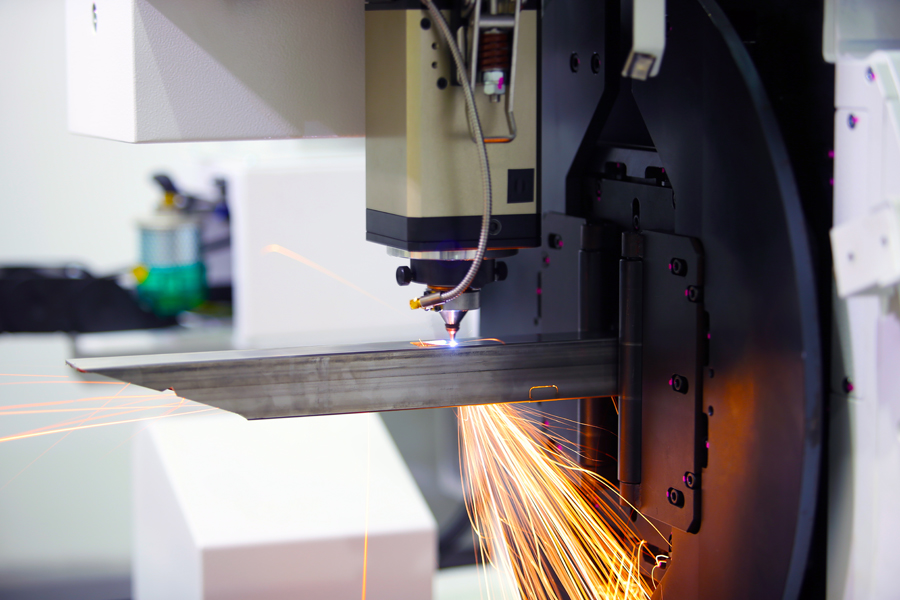 Mazak TUBE GEAR (closeup)
The 5-in. Servo Focus torch is a hot-focused laser spot that produces fast cutting speeds and clean, quick pierce times, which is good for thin-walled tubes.

Cost-effective consumption
A final feature that helps with overall shop performance is the Tube Gear’s 2.5-kW or 4-kW Panasonic 10 resonator, which is the part of the laser that creates the cutting beam. “We call it our ‘green machine’ because the resonator provides high, stable power, but uses 20 percent less electricity than its predecessor,” Mercurio said. “It uses less power by being more efficient at creating a laser beam. It also uses a low simmer current so there is lower electrical consumption during non-cutting moves that the laser makes, such as rapid travel movements between cutouts and during loading and unloading processes.”

Additionally, the resonator uses half as much of the laser gas as its predecessor by using the gas in the machine more efficiently. Filtering, cooling and recycling of the gas allows the machine to use the laser gas for a longer period of time.

Mercurio noted that the CO2 laser is still the most efficient way to produce small holes or cutouts. “The small holes are produced very quickly, no matter the method,” he said. “It is the time it takes to process the material either in the handling or traveling between holes. If we can produce the same rapid travel and handle the material more efficiently, then we can cut with the CO2 laser and keep the cost of the machine attractive. On any laser machine, whether tube or flat-sheet, changing from CO2 to fiber laser comes at a premium and that is typically around $200,000.”