When most people hear “report,” they think of an Excel spreadsheet – endless cells filled with a bunch of numbers and words, a.k.a. data. While some folks are adept at gleaning information from a report, others aren’t wired that way or just don’t have the time.

Fortunately, the modern era has given industry new tools – intuitive reporting dashboards – that offer much more than the static reports of the past. Today, when you hear the term “report,” the idea of a printed-out Excel spreadsheet “doesn’t apply here,” says Jim Finnerty, product manager at Wintriss Controls Group, about the company’s ShopFloorConnect software. “Our reports should be thought of as information delivery. We call it a reporting interface, Microsoft calls it a SQL server reporting service, but really, it’s just delivering information in a format that people need.”

Users can still create an old-school report, if they so choose, displaying a bar chart or any type of chart they need, but unlike the reports of the past, these can be filtered, sorted and displayed in a way that essentially creates customized reports that are specific to the users’ operations and the key performance indicators (KPIs) that they want to achieve.

The reporting from ShopFloorConnect can be delivered to a variety of digital devices and can be updated every 30 sec., if that’s what the user wants. Because the system gathers machine data automatically, the result is near real-time reporting.

Depending on how a user customizes their reports, such as changing background colors or fonts, important information can be formatted to stand out and, therefore, be digested quickly. This allows shop floor managers to spend less time analyzing reports and more time implementing the actual solutions that can make a difference.

So where exactly do these solutions to implement come from? Well, they come from the data that ShopFloorConnect gathers after it’s installed on the designated equipment, such as parts produced or setup times. ShopFloorConnect not only gathers information on what the machine is doing, but it also identifies what jobs it’s handling and which operators are running it.

“We had a customer that had a setup time reduction program in place where they were trying to, obviously, reduce setup times,” Finnerty says. “Before taking full advantage of our reports, things were sort of all over the map. Sometimes, the staff achieved really good setup times; sometimes, they didn’t.

“Finally, somebody at the company took a setup report and filtered it by operator,” he continues. “Right away, they saw that one operator had quicker setup times than everybody else, so they observed that operator to see how they did it and eventually had them train all of the other operators. Sometimes, the solutions are hiding in plain sight.”

For this company, it was all thanks to the simple capability of being able to sort by different items. “More times than I can count, users have been able to uncover some type of data that improved their operations,” Finnerty adds.

During his years working at Wintriss, Finnerty has acquired a never-ending list of the many ways ShopFloorConnect users leverage the technology and its capabilities. Considering ShopFloorConnect comes with 40 standard report types that can all be configured and customized, including what the reporting interface display looks like and when and how reports are delivered, it should come as no surprise.

He gives the example of a foreman that now gets a machine downtime report delivered to his inbox before he comes in every morning.

“Since reports can be filtered by job or by operator, if this foreman, for example, sees excessive downtime on a machine, he can go to that report, change the filtering around and find out why,” Finnerty explains. “Was it the operator? Was it only on a certain job or perhaps only at a certain time? This is how the reporting interface can help businesses get answers to those questions.”

Another example that Finnerty likes to share is of a fab shop customer in Georgia that put ShopFloorConnect on most of their machines.

“This was a place that only had five downtime reasons for all their machines: either a material, operator, quality or maintenance issue plus an option of ‘I don’t know,’ he says. “Whenever it was ‘I don’t know,’ a supervisor got a text. This happened enough times for the supervisor to find out what was going on. They kept it very simple to start off with and were able to pay for it in six weeks.”

Similarly, another customer took advantage of the alert function to shave off machine downtime. The customer, which has 20 machines that produce eight different jobs each day, was experiencing significant delays waiting on a QC person to sign off on a job every time it had to be changed out.

With the alert feature, they created a downtime reason called “waiting for QC.” As soon as the operator selects that downtime reason, the QC person gets a text. Overall, they were able to shave off about 10 min. per job change.

Or how about the metal stamper that has 10 presses and 400 dies that, technically, can run on all of the presses? Because all of the presses might not be exactly the same, certain dies may run more efficiently in certain presses. By looking at an overall equipment effectiveness (OEE) report, which is one of the 40 standard reports offered on ShopFloorConnect, when filtered by machine, managers will know how efficiently each job ran in each machine. That information can be leveraged by the scheduler to assign jobs to the machines on which they run most efficiently.

Yet another example are the customers that put wireless flatscreen displays around their factories that display KPIs, such as parts produced per shift and OEE.

“Instead of delivering a PDF report each morning, these customers come up with creative, catchy ways to display the KPIs via the reporting interface,” he says. “In addition to positive staff reception, these screens also impress prospective customers. When they see all these cool, modern displays everywhere, it leaves a good impression.”

Finnerty’s list of examples could fill up an entire book, and that is in part due to the extensive reporting options ShopFloorConnect delivers, which all come standard with the software. Currently, the company has 40 reports to take advantage of, including downtime and uptime reports, event logs and OEE reports.

A snapshot of an OEE report, as an example, can tell a user the availability, performance and quality of all machines or a specified machine during specified time periods. This insight lets a business understand which jobs ran more efficiently and which ones didn’t.

Like the other reports, OEE can be customized with a filter. Users can save and create as many instances of the report they need and configure each one differently to display the information in different ways. But there is also the option of creating new, customized reports, which the team at Wintriss can help customers create.

“My favorite report is the simplest report I’ve ever seen, which is based on the idea of stack lights that are placed on top of machines in big facilities,” Finnerty says. “If the machine is running, the green light will be on; if it stops, the red light will be on, and so forth. We had a customer that put a flatscreen display on top of every machine where they simply change the background color of the screen when it’s running, idle, etc.”

There are other simple reports, too. Wintriss helped a customer create a customized report based on their uptime target – with cells shaded green when a machine is above the target and red when it’s below. This gives them the ability to sort the report from best to worst or vice versa.

With the wide spectrum of options the reporting offers, the big question is how to get started. While the team at Wintriss is more than happy to help in any way, Finnerty says oftentimes, no assistance or training is even required. For starters, the reporting interface that comes with ShopFloorConnect is based on the Microsoft SQL server database, so a lot of customers already have that expertise. But overall, the system is just incredibly intuitive.

“We’ve always conducted training remotely, even before the pandemic,” he says. “One of the smartest decisions we made was to install ShopFloorConnect remotely, get it all running and configured with all the machines and data the customer wants, and then schedule the training three or four weeks later. That gives the customer time to play around it with it.

“We were wasting a lot of time training people to do things that they could figure out on their own in 5 min.,” he adds. “We let them get used to the system and then sit down with them to identify where they have questions.”

In terms of the machine operators’ learning curve, that, too, is minimal. The main goal at Wintriss has always been to not overburden the operators.

The system does require some operator involvement, but ShopFloorConnect keeps it minimal and easy. A screen pops up so that all the operator has to do is touch it to make a selection.

Based on Finnerty’s examples, there are a myriad of ways businesses can benefit from ShopFloorConnect’s reporting. But the benefits don’t stop at solving issues on the shop floor. A company can use the data to justify new capital equipment expenditures, improve the process and accuracy of quoting jobs, and even increase company morale. It can also aid in the process of eliminating poorly performing material suppliers.

“One of our metal stamping customers was trying to determine which of their steel suppliers served them best,” Finnerty says. “They created a report that identified downtime caused by material issues and sorted according to the various suppliers. It took no time to produce, but it was something they wouldn’t have known unless they used a custom report.”

Essentially, the overriding goal of the software is for customers to get more out of what they already have. They can ask themselves questions, such as “Where do we have room to improve? What are our problems? Why are we not running at full capacity?” and use the system to get the answers they need. 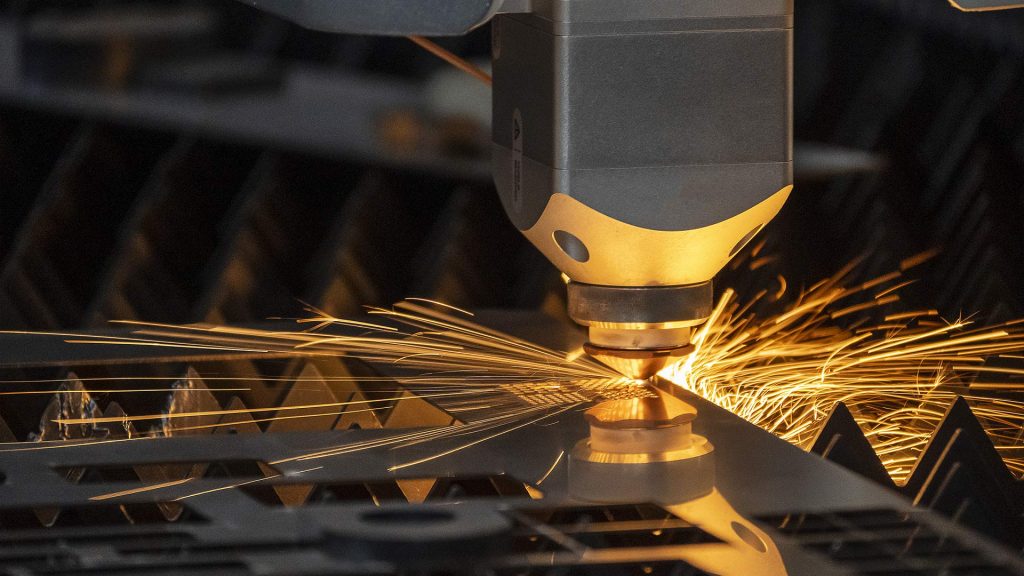 For CEOs
The right track
A fabricator ramps up its use of ERP software, achieving increased throughput, on-time deliveries and lower inventory costs
Feb 02, 2023