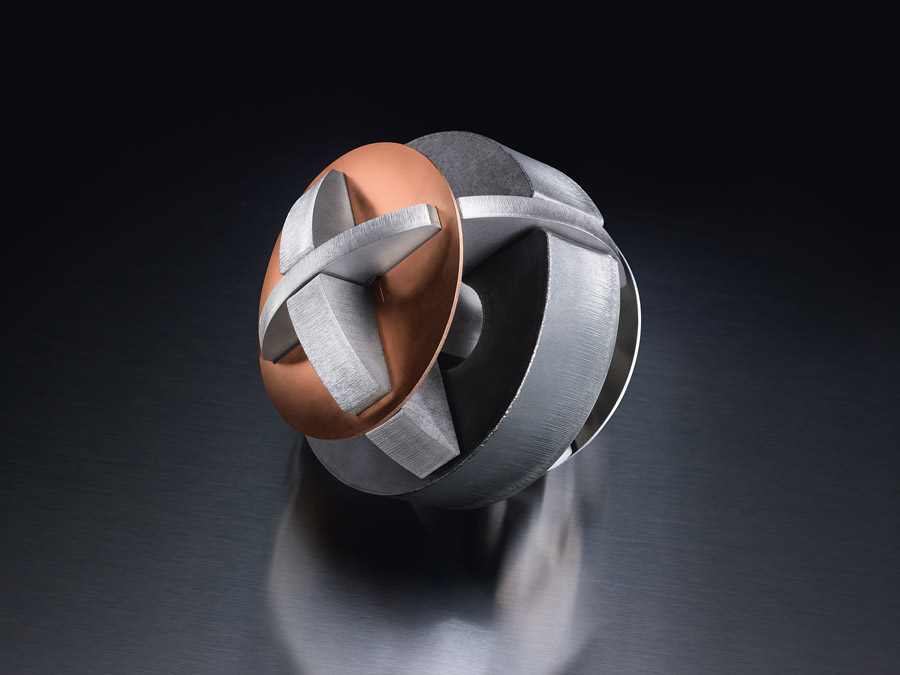 Trumpf’s BrightLine fiber option allowed all of these materials – thick, thin and reflective – to be cut.

Fabricators are continually looking for faster, more consistent and more cost-effective technology solutions to stay competitive. As providers make improvements to solid-state laser cutting and welding technology, its application appeals to more fabrication shops. Trends are emerging that reflect this.

It should be noted that while a CO2 laser uses gas to generate light, a solid-state laser uses a medium, whether fiber, disk or rod, referring to the shape of the medium. Typically when industry refers to solid state, they mean fiber. Trumpf, on the other hand, uses disk technology for lasers 1 kW and above and fiber for lasers below 1 kW. The inherent benefits of fiber and disk are the same, however.

In general, fiber or disk lasers offer higher productivity over CO2 lasers for metal 1/4 in. thick or less. Other benefits are that solid-state lasers provide higher energy efficiency resulting in less operating costs, and they don’t have any moving parts or mirrors so there are no maintenance requirements. They also offer better overall stability, meaning less fluctuation in power during the cutting process. In fact, Trumpf’s TruDisk technology is guaranteed never to deviate more than ±1 percent for the life of the laser.

Of course, CO2 lasers are still a viable option for material thicker than 1/4 in. “Fiber laser technology has been limited because of its small high-density laser beam. The wavelength produced by the laser is well absorbed by the material, which results in extremely fast cutting speeds in thin material. However, because of the smaller beam diameter, cutting thicker material can be difficult because there is less room for evacuation of molten metal,” Thompson says. “So there is always that dilemma – choosing to cut at really high rates of speed with fiber lasers, but sacrificing quality and efficiency when cutting thicker materials.”

Solid-state technology improvements include the availability of higher power lasers, such as the 8-kW TruLaser 5030 fiber.

“With fiber lasers, the more energy you have, the faster you can cut with nitrogen. Fusion cutting with nitrogen provides the fastest cutting speeds coupled with the best edge quality,” Thompson says. “Along with higher throughput and higher productivity, the benefit of a higher power laser is when cutting thicker materials, say 1-in. mild steel, the laser is not only faster but the process becomes more reliable.” 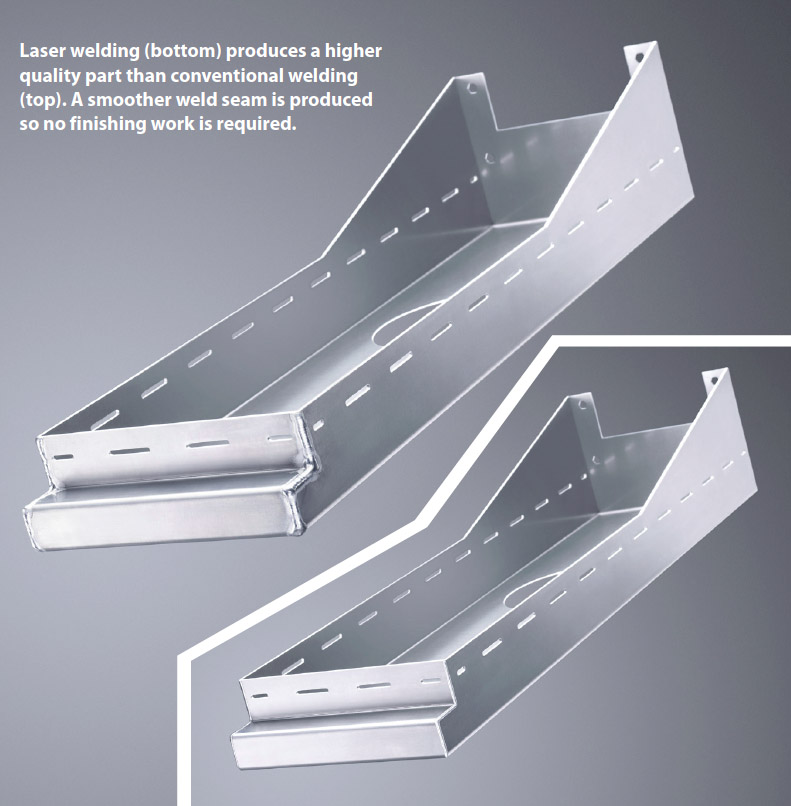 Thompson goes on to explain about the sweet spot for the 8-kW laser. “If you are cutting 18-gauge material, for example, the linear cut speeds are extremely high because the material is so thin. But the cutting unit can only move so fast because it is limited by the dynamics of the motion unit. So the true performance benefits are seen in the medium-thick range of materials. Cutting 12-gauge or 8-gauge material with nitrogen, for example, is really where you see the benefits. In this range, the cutting unit can keep up with the linear speeds and you actually see very high throughput.”

Because the 8-kW laser power is somewhat limited by the physics of laser cutting, auxiliary processing technologies come into play.

Trumpf’s BrightLine fiber option offers high part quality in thick materials without compromising cutting speed in thin materials. BrightLine fiber uses a new nozzle technology that accelerates the cutting gas to a high velocity and has special cutting data. Also, with BrightLine, the user can programmably change the size of the beam diameter. In other words, a small beam diameter is used for cutting thin materials while a larger beam diameter is used for cutting material 3/8 in. and above. The larger beam diameter leaves room for the molten material to escape and makes removing parts from the skeleton a lot easier.

The CoolLine option from Trumpf implements a water mist to cool the material as it is cut. “Typically, you need fairly wide spacing between individual parts on a sheet because of the heat introduced into the material,” Thompson says. “Because CoolLine prevents the material from overheating, it allows parts to be nested more closely. Also, this option allows you to cut small sidewalls and difficult geometries more efficiently, especially in thick material. So with CoolLine, not only can you cut 1-in.-thick mild steel but you can optimize the sheets.”

Trumpf also works to develop nozzle automation and material handling, Thompson noted. “The end all be all is not how high the laser power is, but how consistently you can pace the cutting process with automation. We want to make sure users are benefiting from the actual throughput these lasers are providing.” Trumpf’s Smart Nozzle Automation can monitor the status of the nozzle and exchange it for a new one once it reaches the end of its useable life.

All of these technology options lead to one end goal: minimizing operator intervention. 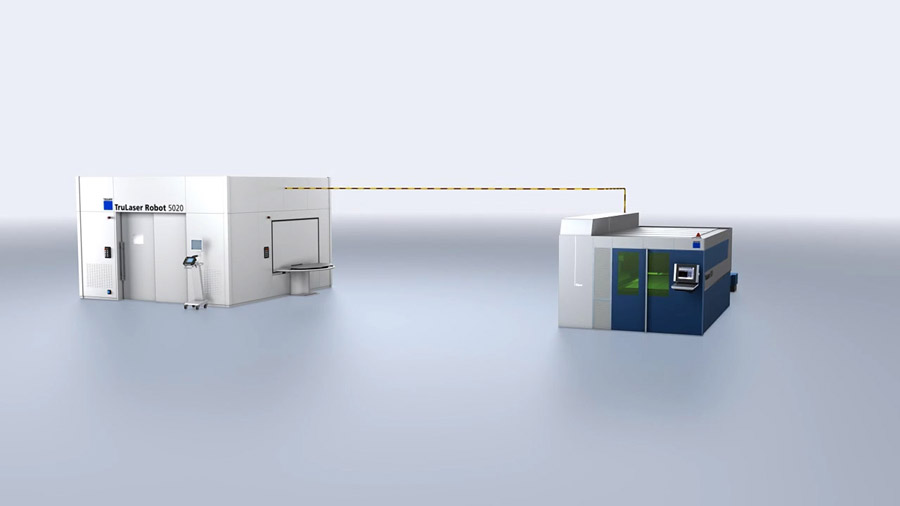 With Trumpf’s laser networking, the laser is integrated into the machine so the delivery cable goes directly from one machine to the other.

Direct-diode laser is another buzzword in laser fabrication. Rather than using the diode to stimulate a rare element inside of a medium like a disk or a fiber, a direct-diode laser uses the light directly from the diode. “The benefit is the simplicity and high energy efficiency,” Thompson says. “Therefore, the cost of the laser is less, and the operating costs tend to be less.”

However, the direct-diode laser has yet to offer the high performance of a solid-state laser. The beam diameter currently is too big to achieve the high edge quality users have come to expect from laser cutting.

Direct-diode lasers are very common for welding and brazing purposes. “With welding, you want the beam to be big,” Thompson says. “If the beam diameter is too small, it just pierces through the metal. So this technology is for applications, such as welding, where beam quality is not such a concern.”

Thompson adds that Trumpf continues to focus R&D efforts into direct-diode technology to make it a more universal tool. “Direct-diode lasers will at some point be used for cutting,” he predicts. 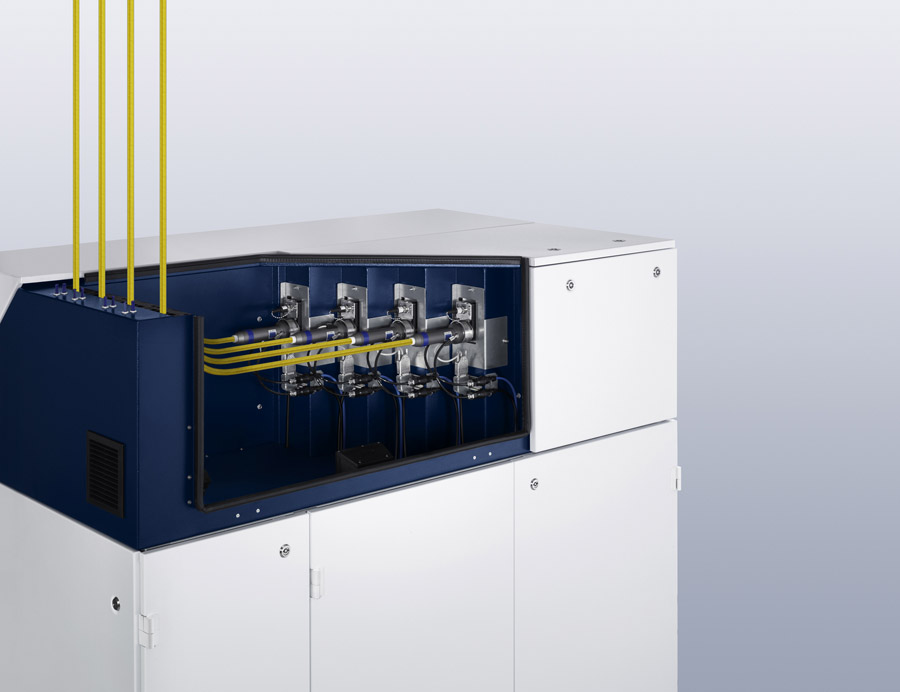 Trumpf’s laser networking can be set up so the user can have up to four machines off of one laser source. Each yellow output fiber can go to a separate station.

Another consideration for fab shops is laser welding. Trumpf offers welding lasers in disk, fiber and direct-diode laser platforms, depending on the application. While more investment is required when buying a laser welding system versus a conventional welding system, the overall savings are often greater because the laser is able to process at higher speeds and precision.

With laser welding, there is minimal heat input and, therefore, only the smallest degree of twisting or distortion occurs in the material. Also, because it is a fusion process, there is no buildup of material.

“The beauty of laser welding is you don’t have to touch the part after you weld it,” Thompson says. “A smoother weld seam is produced so no finishing work is required.”

And laser welds are strong. “A conventional welding process, such as MIG, puts a lot of heat into the weld,” Thompson says. “During a pull test, the weld itself might not fail, but the area around the weld could fail because the heat in the material changes the chemistry. Laser welding adds so little heat that the area around the weld retains its original structure and, therefore, the original tensile strength.”

One way fabrication shops can perform laser welding and cutting is to share the laser beam through laser networking. “You can set up that laser with another optical delivery system and use that beam with another machine,” Thompson says. “You can use that same laser for cutting and welding purposes instead of buying a new laser source for welding.”

Although laser networking is not unique to Trumpf, the company feels the way it optimally manages the beam delivery is absolutely unique. “Trumpf manages which machine is getting the laser beam at which time. Say you are cutting on a TruLaser 1030 fiber and want to do a different part. While the pallet change takes place, the beam can be used by a welding machine. In this way, you can make the most use of the laser source. There is little to no downtime.”

Thompson adds that laser networking was thought to only make sense for entry-level shops trying to make the most of their machinery. “But we are finding, especially in Europe, fabricators running three shifts a day are getting close to 100 percent beam utilization. The laser source is an expensive and important part of the overall configuration. So, why not utilize that beam as much as possible by sharing it with multiple cells? You can do up to four machines off of one laser source.”

He notes that if you buy a laser cutting machine and then a welding robot to share one laser source, as your welding business grows, you can later buy a laser dedicated to welding and have one beam for that source.