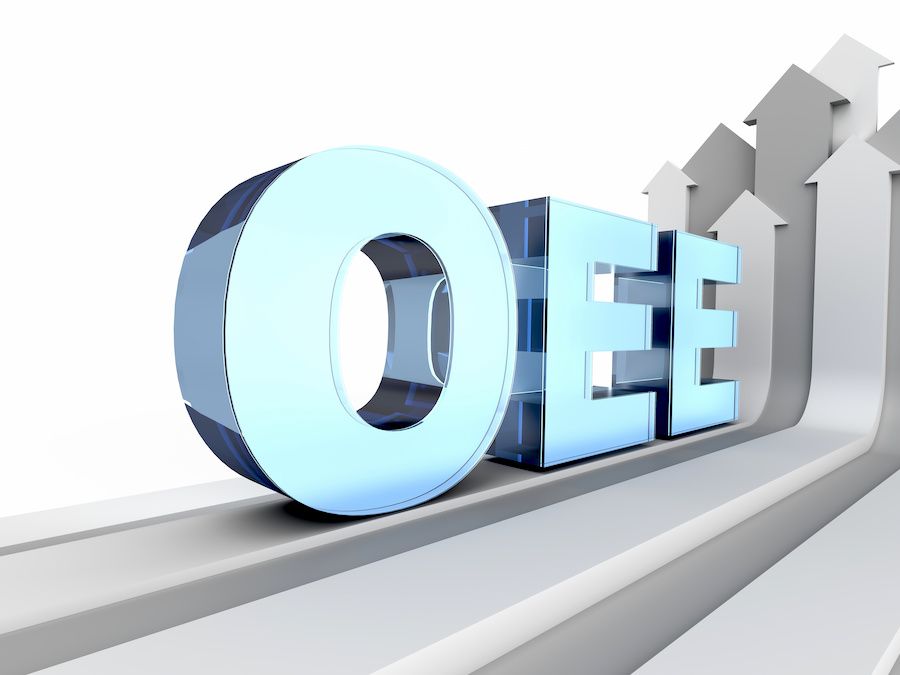 As defined by the folks at OEE.com, overall equipment effectiveness or OEE is “the gold standard for measuring manufacturing productivity.” An OEE score of 100 percent indicates that a fabricator is manufacturing good parts 100 percent of the time. In addition to the quality of the parts, machine performance (whether machines are running as fast as possible) and availability (the percentage of time that machines are running) are also factored in.

“Back in the day, when a fabricator measured OEE, a junior engineer was sent out to the shop floor with a stopwatch to monitor the machine to get a rough idea of efficiency,” says Jim Finnerty, product manager at Wintriss Controls Group LLC. “It was literally a back-of-a-napkin type of assessment. It was never meant to be a continually monitored process like people do today.” 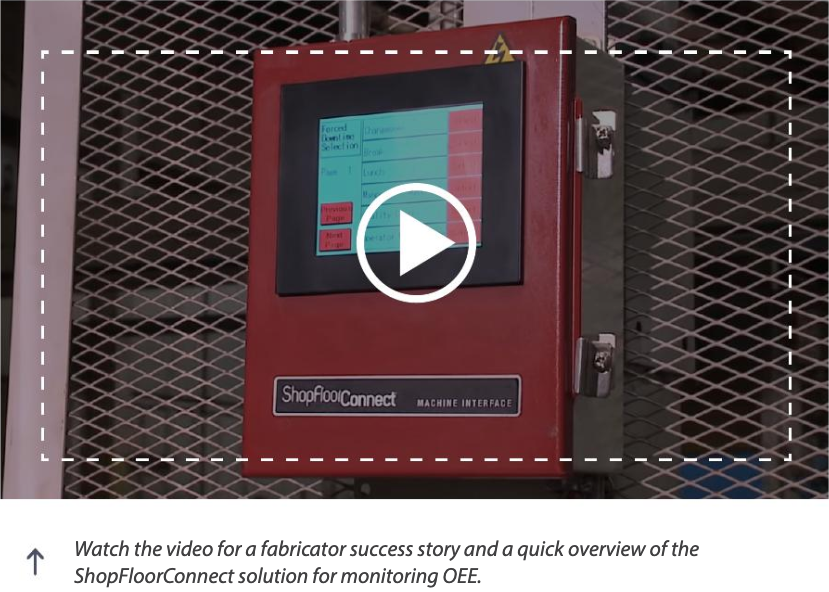 Measuring part quality and machine availability back then was fairly simple, but performance was tricky – especially with a high product mix. The original intent was to take the nameplate maximum speed of a machine and then track how quickly it was running. If the machine is capable at running 100 parts per min., but it’s producing 75 parts per min., performance is rated at 75 percent.

“That’s great if your machine only does one thing, but in the real world, one day you might be machining an engine block that can take 35 min. per part whereas the next day, you’re cutting a slot in a bracket that might take 30 sec. per part,” Finnerty says. “And with that, you’ve added this huge layer of complexity into OEE.”

Today, fabricators have a better way to accurately measure performance. Wintriss Controls’ automated ShopFloorConnect system is designed to collect uptime, downtime and reasons for downtime from any type of manufacturing machine with little need for any operator intervention. Beyond assessing OEE, the data that’s collected from the ShopFloorConnect system can help fabricators identify ways to reduce machine downtime and other areas for improvement.

Without a data collection system like ShopFloorConnect, fabricators are constantly chasing a moving target. Manual tracking is possible, of course, but every time a job changes, so does the performance rate calculation. Not only does this present the possibility for human error, calculations are never as timely as they could be. Additionally, bias – no matter how unintentional – has a tendency to affect the accuracy of reported performance.

“When the operator scans in a new job, we know what that job is and we apply the ideal performance rate for it to calculate OEE while that job is running,” Finnerty says. “When people try to manually do OEE with a high product mix, they can quickly get overwhelmed. ShopFloorConnect, however, can keep up with it.”

At its core, ShopFloorConnect is powerful software with a simple device interface. A small box is installed onto each machine that will be monitored. The software embedded in the box automatically collects operating data by connecting to common electrical signals emitted by the fabricating equipment.

A rudimentary example of how that works can be seen via a 2-D laser. Most laser cutters feature a light on the control console that turns on when the machine is operating. The signal from that light can be collected by the software within the box to measure the machine’s uptime and, therefore, downtime.

“When we started peeling back the layers of the onion, we wanted to be able to talk to every type of machine and be suitable for any type of manufacturer,” Finnerty says. “When we looked at what data was common for every single type of manufacturing machine, we came up with just two data points that we would need to collect. One of those is whether the machine is running or not. By collecting that data, we can tell uptime efficiency.”

The other data point that is collected is machine output. Like the light on the laser cutter, there are electrical signals from all types of fabricating equipment that can be collected to determine output. Wintriss Controls will work with a customer’s electrician to identify the signals that should be collected. Typically, installation for a box only takes about three hours, and that includes the electrician’s training time as well as any specialized configuration that may be required.

“Once you’ve collected the time a machine has been running and its output, you can measure your efficiency,” he says. “That information in itself is powerful as it can also be analyzed for improvement opportunities.”

The moment that a ShopFloorConnect machine interface box is installed, it starts collecting data. And because operators are aware that their equipment is being monitored, improvements in uptime typically begin immediately. Even though the intent is not to micromanage employees, the mere knowledge that a monitoring device has been installed tends to inspire machine operators to be more thoughtful in the amount of time it takes them to process a job. There are plenty of reasons, of course, that a machine might be experiencing downtime that are out of the operator’s control.

“When you ask a fabricator about downtime, they tend to remember the catastrophes,” Finnerty says. “They remember when a machine was down for two weeks, but if you look at the data over time, the catastrophes aren’t the problem; it’s the small things that really add up.”

Without a monitoring system, it’s hard to know where downtime occurs and how to fix it. Once a machine is flagged as having excessive downtime, a closer look can reveal the reasons why. As just one example, a ShopFloorConnect customer discovered that the method for unloading parts was creating a bottleneck. Another customer recognized that certain machines running certain jobs required additional operator attention. By simply shifting operator responsibilities, OEE improved.

“You can improve in so many unexpected areas,” Finnerty says. “The ROI is astounding, but in that same breath, time for ROI is a loaded question. It depends on what the customer’s productivity was when ShopFloorConnect was installed, but it also depends on what level of commitment they have to improvement. We’ve had customers that were able to significantly reduce downtime. One was even able to increase efficiency to the point where they were able to eliminate an entire shift.”

And because opportunities for improvement aren’t always obvious, Wintriss will work with customers to share insights and compare notes. And based on the years of R&D and customer interfacing that Wintriss has committed to ShopFloorConnect, the company’s representatives can offer a wealth of advice.

In terms of data collection, the only time an operator needs to truly interact with ShopFloorConnect is when a reason for downtime is required. But Wintriss has made that task as straightforward as possible.

“When a machine stops for a significant amount of time, let’s say 5 min., most fabricators will want to know what caused the machine to idle,” Finnerty says. “ShopFloorConnect, therefore, has a relay that will open and inhibit further machine operation until a reason has been attributed to the downtime. A message will appear on the machine interface that says, “in order to restart the machine, please select a downtime reason, such as ‘waiting for material.’”

In order to enable that feature, additional settings must be activated on the box. From there, Wintriss can help a customer build a simple, concise downtime menu in the software to be displayed on the machine interface box. When the machine stops for what the customer considers a significant period of time, the operator simply chooses the appropriate reason from the menu and can carry on with the job.

To analyze the information that’s coming from ShopFloorConnect, Wintriss provides dozens of reports including reports for uptime, downtime, reasons for downtime and OEE. Customers can also create their own reports. Customers can also create their own reports. The ease in which reports are created is enhanced due to the fact that Wintriss relies on Microsoft SQL, which most customers are already familiar with for their financial reporting and ERP system.

Historically, business owners think of software system rollouts as an absolute nightmare, but “we streamline our objectives to keep it simple,” Finnerty says. “We don’t manage employee time tracking or inventory management or order management or any of those things, but can we interface with those systems.

“We use web browsers for our interface and Microsoft SQL for reporting, so there’s nothing proprietary to learn,” he concludes. “It’s the customer’s data and they should be able to do whatever they want with it.”