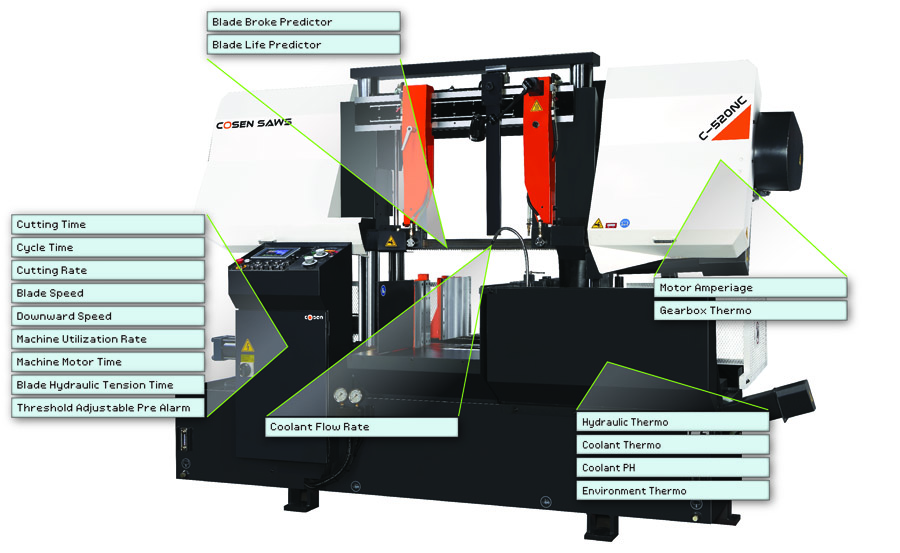 Sensors and monitors all over the machine. These supply the data that feeds the model, which processes data into intelligence – like what maintenance is in store, and when.

We knew this story was coming – it was inevitable — but we would not have predicted that it would come from bandsawing machines. But Cosen did it, and they build bandsaws, so this is where it comes from.

What Cosen has done is to apply multiple-sensor monitoring; multifunction statistical modeling; big-data, cloud-based computing; and real-time analysis and feedback to optimize sawing performance. It reduces scrap, anticipates wear, displays performance trends, predicts blade failure, and monitors machine health and performance. By providing the operator and the shop with graphical displays and warnings in real time, it displays what has to be done to get the best cost-per-part. It replaces rules of thumb, and managing operations by waiting for failures.

That is, that’s what Cosen has set out to do, and what it has spent two years developing. The concepts are showing up in many facets of industry, but they’re more familiar in process industries, where a one percent margin means one million dollars saved. The digital tools are known and the methods have been pioneered. Cosen has exploited them in a custom-designed package that brings high-powered optimization to the first stage of many fabrication operations: cutoff sawing.

The two big questions are how does it work, and what does it do for you? The company announced the system, called MechaLogix, on October 5th, so the story is still unfolding. Until you get a look at it for yourself (at Fabtech, if you’ll be there), here’s what we can tell you about it.

From machine monitoring to modeling

One could say, “well, this is just an elaborate case of applying machine monitors.” But that’s not really it. There are sensors – from a handful to 15 or more – but they aren’t just providing readouts. Their outputs are run through a statistical model that applies intelligence, gathered from two years of laboratory and field data, correlated with actual outcomes, in terms of blade performance and machine health. The sensor data is processed and turned into the specific machine behaviors that they relate to. So the graphs and readouts you get are not just things like current draw or feedrate. They’re actual predictions of when that blade is going to fail, when you have to change the coolant, how this blade is producing compared to an alternative one, and what maintenance you have to apply to the machine. Instead of a start-stop, “scrap the last piece and change the blade” interruption, you’ll know what to anticipate and how to schedule changes and maintenance.

The central tool in this system, the “black box” of the model and associated algorithms, appears to be extremely flexible, allowing a wide variety of inputs, based on what the user wants to know, and to process a wide variety of experiential data to make predictions and to display trends and warnings. This is why it is qualitatively different from a dashboard of gauges and conventional monitors. This approach to using data has found wide application in everything from battlefield control to health care planning; it’s the hot ticket in advanced use of information technology as it’s applied to, in our case, physical events in manufacturing.

And so it sounds a bit up-in-the-cloud, a lofty abstraction, until you get down to earth and look at what it’s doing. We may not have thought that a bandsaw has that much to tell us, but it can tell us a lot.

Seeing this on his dashboard will wake any operator up: the blade health is falling off a cliff. Other output from the program will give you a good idea of when it will fail completely.

“It’s complicated,” says Joshua Sun, Cosen’s Business Development Mgr. for Cosen Saws. “We’re constantly looking at the function of the machine as a whole. What we know from our testing is what the parameters for a machine in good health are supposed to be, within a range.”

Sun hesitates, trying to boil this complex system down for someone who isn’t going to understand the way the model works – this editor, in other words.He gives it another try:

“Knowing from historical information, and being that we have over 40 years of experience in bandsaws, we know how our machine is supposed to behave and react. With the sensors, we can see things that we humans are just not capable of sensing. Minor minute harmonics — details like that — where sensors can pick up things we can’t. From there, we’re taking that information and we’re processing it. Big data, if you will. Then we’re analyzing the information, and from there we can tell you specifically, a day or weeks in advance, the status of your bandsaw blade, the tool itself, and the machine.”

Sun emphasizes the vibration monitoring, and harmonics. It’s clear that this is special data for someone who really knows what he is looking at – or a computer model that does – because blades that aren’t running at the right speeds, or that are getting worn, put out known sets of vibrations that mean something…if you know what they mean. Add to that, you have temperatures, motor loads, and blade deflection. Compute, compute. The result is that the system knows your blade will be cooked on Tuesday afternoon, that you’re running a little slow, that you’d better change the coolant, and that you’re going to have some expensive scrap and downtime if you don’t listen. If your operator doesn’t have 40 years of experience, he or she will no longer have to “learn by breaking.” MechaLogix’s work is complicated to make your work simple.

It looked like the motor load was in safe territory; then, quite suddenly, the load and current draw took off for the sky. The program will tell you what is happening with your blade and the rest of the system.

From service centers to job shops

Who is the system built for?

“The application can be applied basically by anybody who is concerned about cost.” says Sun, casting a very wide net. “If we just look at it broadly, it would absolutely make sense for service centers to have this technology. They’ll be constantly using it. For the small job shops who are working with contracts with aerospace companies, or anyone fabricating with expensive materials, especially where they’re hard-to-cut materials, they’ll want these predictions and analyses as well. And no one wants to cut material, and then stop to change blades and start cutting again, because cutting conditions aren’t going to be the same anymore.”

Fab Shop has not seen MechaLogix at work yet, so we can offer no judgments. Like some of you, we’ll see it at Fabtech. But we recognize it as an example of the next step in machine control and monitoring, using large amounts of data and computer models that can treat the data as interactive sources of information, intelligently judging what they mean, not as individual data points, but as machine-wide interactions that tell us much more than simple things like your motor is drawing too much current or that your blade guides are wearing out.

It also can be seen as part of the new wave of cloud computing – the real thing, not just some Web-connected data storage. The amount of data processing is so high that it can’t be run in real time on a shop PC or workstation. It’s the second example we’ve seen of cloud computing in fabricating, the first being Bystronic’s ByOptimizer nesting program that can be called the real thing.

This may sound awfully complicated for something like sawing, but, as Sun says, it’s complicated so your operation can be simple. And highly optimized. And smooth-running, with fewer interruptions. You and your operator will never see the complication. All you’ll see is actionable information, in real time. We’re looking forward to seeing it at work.