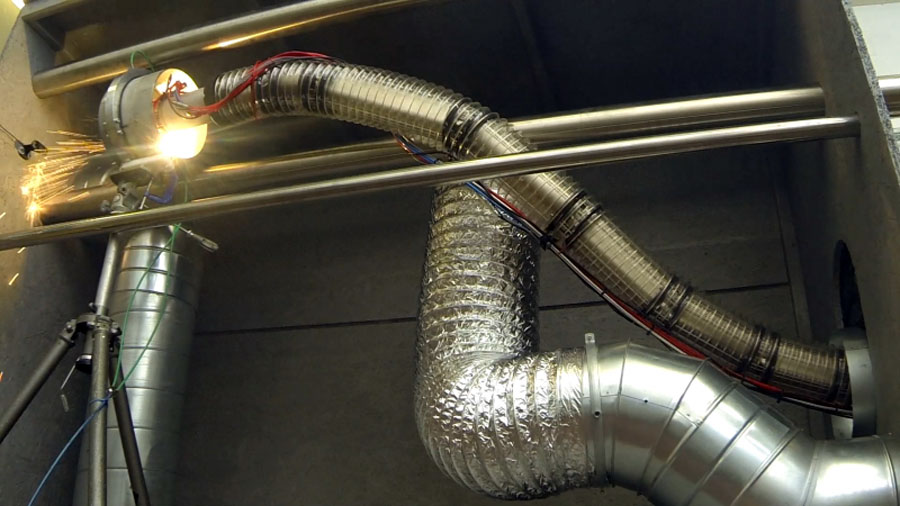 Welding a pipe by traditional methods, such as using a handheld welding gun or by clamping an orbital welding machine to the outside of the pipe, can be a relatively straightforward way to join two sections

together, especially when the piping is configured in a simple, straight length of pipe with lots of space around it and nothing dangerous or hazardous in the surrounding environment.

But what if that’s not the case?

What if the pipeline runs through a labyrinth of piping and valves, actuators, control modules, and other technology found in oil refineries, power plants, and other facilities? If that’s the case, the standard modus operandi might be next to impossible.

In fact, according to researchers at the UK-based OC Robotics (OCR), and The Welding Institute (TWI, Cambridge, UK), many modern industrial operations often utilize complex and extensive pipelines, which can lead to maintenance issues, such as confined spaces, limited external access to pipes and hazardous working conditions. In these cases, external orbital cutting and welding may not be viable.

A recent feasibility study was undertaken by OCR and TWI to identify a suitable welding technology to deploy “within” pipelines for in-bore welding, and to determine a method of access and alignment to reach the weld site. The LaserPipe project, it was called.

What they developed was a laser welding head that was integrated with a snake-arm robot, to demonstrate remote locating of a weld joint, laser alignment, and an accurate weld bead. This concept should also be suitable for in-bore laser cutting.

The LaserPipe system uses a snake arm based on OC Robotics’ Series II X125 arm. The flexible robotic arm is designed for working in confined and hazardous spaces. Made of individual links, and controlled by OC Robotics’ proprietary software, the snake-arm robots are able to traverse cluttered environments and perform inspection, fastening, and cleaning when integrated with off-the-shelf or custom-designed tools. The robots are designed with a hollow core, allowing cabling, hoses and other equipment associated with the tool to be routed through the center of the arm.

According to Tony Pramanik, project leader Laser and Sheet Processes for the TWI, the snake arm consists of a laser welding head, and has a bearing that can rotate a 45 deg. angled, water-cooled copper mirror. The beam reflects off the mirror, bending the beam 90 deg. to the work piece. When the mirror rotates, the beam can spin 360 degrees.

The laser-welding head is powered through a fiberoptic cable by a remote laser generator. Equipped with remote location sensors, the robotic arm differs from other pipe-running robots in that it’s a head-following design. That is, as the operator steers the head of the robot, the body follows behind on the same path, never coming into contact with the pipe. When it withdraws, it retreats along the exact same path it used going in. (See videos here and here.)

Alignment is critical for a proper weld seam to be accomplished. Greg Udall, project manager on the LaserPipe project for OC Robotics, explained that the system’s alignment is achieved in two key stages:

Stage 1, System Deployment: The operator deploys the snake-arm and welding tool using HD navigation cameras at the tip of the snake-arm. A simple controller, in this case an Xbox game pad, allows the operator to accurately navigate the tip of the snake-arm through complex environments, such as a series of pipes. The body of the snake-arm follows the path described by the tip so the complex control required is fully automated, allowing the operator to focus on delivering the tool to the worksite. “Typically, anyone of the Playstation/Xbox generation can already be considered a trained operator of the system,” Udall said. “For those of us less familiar, it usually requires about an hour with the system to become confident deploying into complex environments.”

Stage 2, Laser Alignment: Once the tool has been delivered to the worksite, the operator then switches the control mode to “laser alignment.” The system then requests the operator to align three spots (laser pointers integrated in the tool head) so they converge on the weld site, where the two workpieces are butted together. The tool then rotates 120 deg. so the process can be repeated. Then, after another 120 deg. rotation, the process is repeated a final time. This tells the software exactly where the pipes meet and ensures the laser remains aligned during the weld. Once the operator is confident with the weld path, the laser can be released and the weld can be performed, Udall said.

The 5-kW laser can weld steel at a rate of one meter (3 ft) per minute with a tolerance to the joint line of 0.2 mm. To ensure the weld is even and the laser doesn’t scatter beyond the pipe, a collar is fitted externally over the joint. This acts as a beam dump to minimize stray illumination, and it supplies a constant stream of shielding gas to reduce oxidization of the molten material as it cools. Meanwhile, air knives protect the robot’s optics from sparks and splatters. 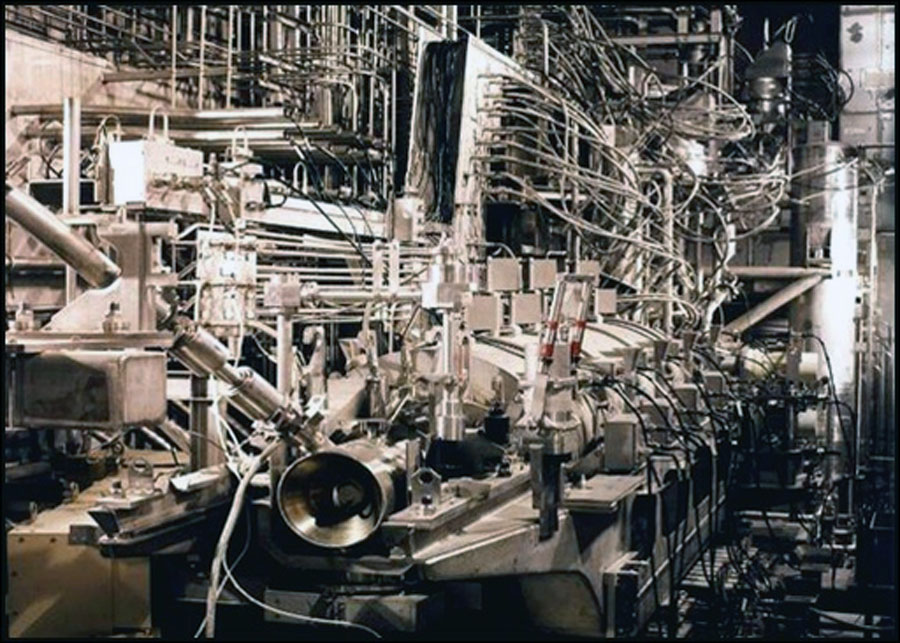 A maze of piping at a power plant. Photo courtesy of Sellafield Ltd.

The collar is required to provide shielding gas over the rear of the weld to reduce oxidization as the molten material solidifies. The tool also passes shielding gas over the internal weld site; this improves the weld quality. As this was a feasibility study, the focus was on the laser welding process. The researchers said that as they we further progress the technology, the plan is to reduce the size of the collar, or possibly remove the need for it altogether.

Pramanik said that “as the joint between the 2 pipe halves is a butt joint, then the outside of the pipe requires shielding from oxygen whilst the metal solidifies. So the collar is filled with nitrogen to shield the outer bore from oxidizing, which could lead to weld porosity, and therefore to weld weakness.” 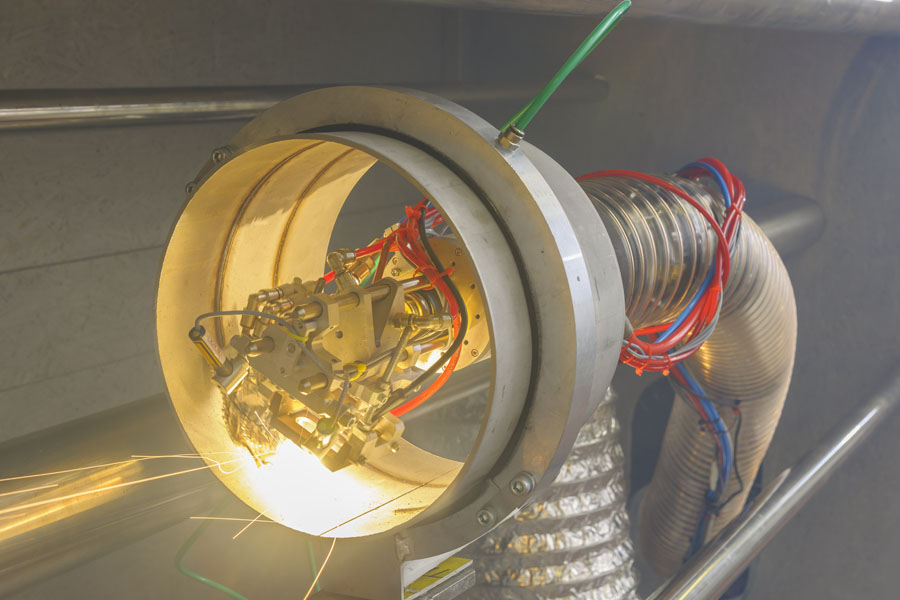 A 5kW laser is used to join a pipe together

Another function of the collar is to catch stray laser beams in the near area, which, if you are welding on site at a nuclear facility, could lead to potential fire, health and safety risks.

“Remember that this project was a feasibility study to see if snake arm robots can be partnered with laser welding heads for in-bore welding,” he adds. “When this concept matures, the joint design itself could cleverly overcome the need for the outer bore shielding collar, for oxygen shielding and catching stray laser beams.”

In the TWI trials that were performed, Pramanik said that welds were X-rayed for porosity content. The welds were sectioned to see the weld profile, to ensure there was minimal weld cap and root underfill. Also, in trials, he said researchers aimed to fully penetrate the material, so the weld can be seen from the outer bore.

Future development work could include improving the gas shielding technology and air knives, refinements of the laser alignment feature, miniaturization of the optics, and studying how to use the laser and robot for cutting and decommissioning work.

The year-long LaserPipe project ended with 2015. It was part of the Innovate UK’s competition launched to produce feasibility studies under the banner of “Developing the civil nuclear supply chain.” In addition to nuclear industries, the technology would also have applications in aerospace, construction, defense, and oil and gas. 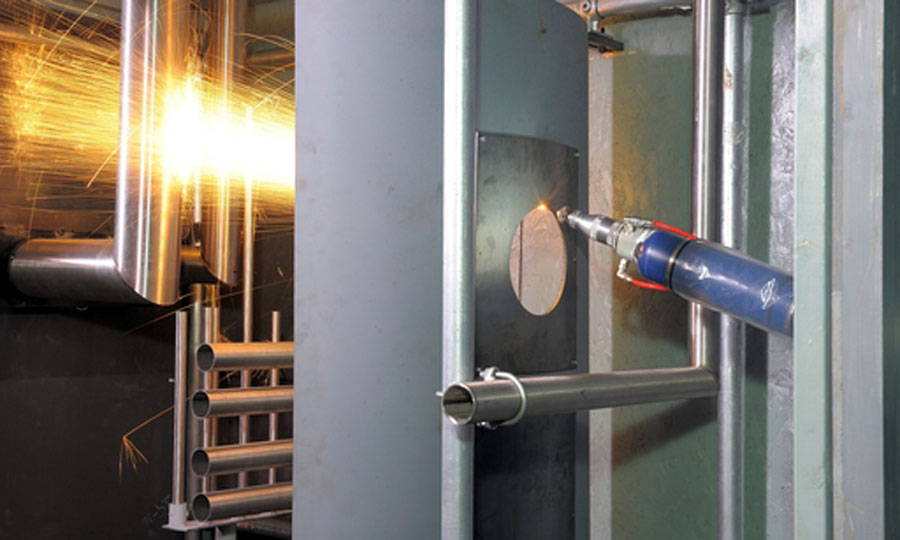 The LaserPipe study wasn’t the first time that OC Robotics and the TWI worked together on a project. A number of years ago Greg Udall said that the two companies developed a system called LaserSnake. This was the integration of industrial high-powered lasers with snake-arm manipulators for the purpose of nuclear decommissioning. This successful R&D project lead to a much larger project, named LaserSnake2.

For this study a snake-arm robot was combined with a 5kW laser to enable a selective, remote-controlled approach to dismantling and decommissioning complex structures in hazardous and confined nuclear environments.

A 2.5m long, 100mm dia. self-supporting snake-arm robot with integrated navigation camera and lighting was adapted to carry the laser cutting head. The snake-arm control system coordinated tip motion with the laser control to cut a variety of different substrates.

LaserSnake was operated in a mock-up through a 1m long, 200mm dia. penetration that simulates a cell wall. Inside the mock-up was a representative vessel and pipe work. The snake-arm cut a hole in the vessel wall to allow it access beyond. (See the video here.) From here the snake-arm avoided the obstacle, and pre-programmed cutting paths were used to cut the target pipes.