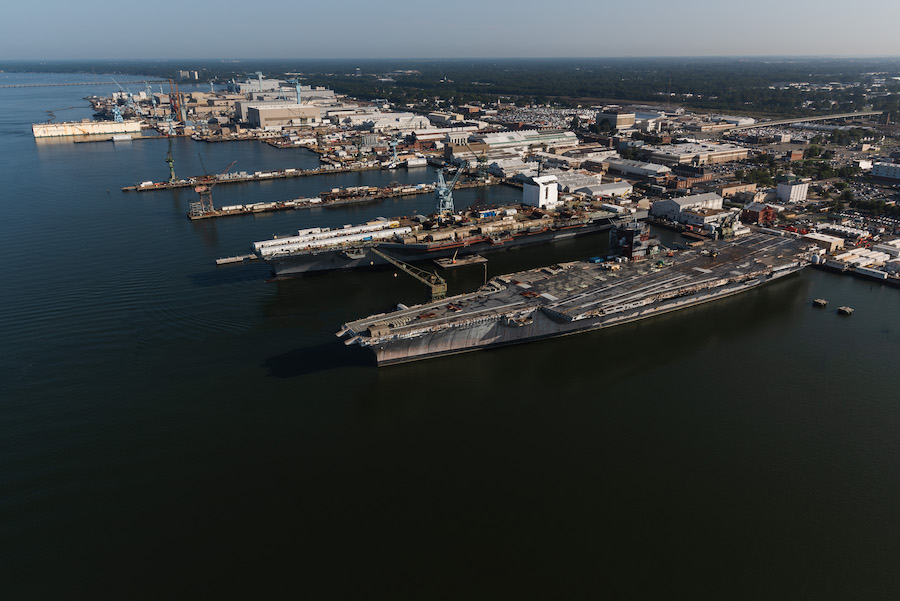 In 1891, Newport News Shipbuilding (NNS), now a division of Huntington Ingalls Industries (HII), completed its first ship, the tugboat Dorothy. During the nearly 130 years that have passed since her christening, the company has constructed 800 ships, which outpaces any other U.S. naval shipbuilder. To produce those vessels – both naval and commercial – the company currently employs 42,000 people in the shipbuilder’s headquarters in Newport News, Va., and around the world.

Despite being the largest industrial employer in the entire state of Virginia, even NNS struggles with hiring and retaining quality staff as do so many businesses around the country. To combat the skills gap, the shipbuilder is focused on developing and executing workforce development initiatives and other innovative programs that ultimately invest in the future generations of workers through education.

“Newport News Shipbuilding has been an economic engine for this community for 134 years, but like others in the maritime shipbuilding and repair industries, we are challenged with identifying and hiring talent for technical and skilled trade positions,” explains Duane Bourne, the media relations manager at HII. “Because many businesses are in competition for the same talent, investment in developing our region’s talent pipeline is more critical than ever.”

Like the ships NNS produces, the goal is to fortify the local workforce with the skills and support it needs to create long-lasting economic strength. Bourne says that the endeavor starts with efforts like the Maritime Industrial Base Ecosystem coalition, which is bringing together industry partners from Hampton Roads and across the Virginia Commonwealth to examine how to best prepare for increasing maritime demands.

Cooperative efforts have been incredibly fruitful, but so, too, have NNS’s internal efforts. The shipbuilder has launched some of the biggest and most comprehensive programs in the area – and perhaps the nation – to ensure a prosperous workforce for today and for the future.

“Our hiring and workforce development programs are wide-ranging to include programs for high school and colleges students and adult learners,” Bourne says. “It also includes career awareness programs for children as young as pre-K. These programs have different goals and target audiences, but have been effective in equipping individuals with the skills necessary to strive toward continuous improvement.”

Examples of NNS’s training programs date as far back as 1919 when the shipbuilder’s Apprentice School was founded. Bourne classifies it as different than most apprenticeship programs, considering it a comprehensive shipbuilding training program with a focus on scholarship and craftsmanship as well as leadership. For more than 100 years since its founding, the school has been effective in terms of developing the skilled craft workers the company needs, but it also has a proven track record for building the talent pool for the next line of company leadership.

More recent additions to NNS’s extensive approach to training and recruitment include its Marine Trades Training program, a pre-hire program in partnership with local community colleges and the Virginia Ship Repair Association. The two or three-week courses offer introductory training in seven different trades to unemployed and underemployed adults and has had high success and retention rates.

To engage with young adults in high school, NNS relies on Good Life Solutions, a partnership with a local career and technical high school to train students who wish to start working in a trade when they graduate and turn 18. The one- to two-year program also offers participants coaching to increase the likelihood of landing a good job.

In-house training programs are, of course, also integral in ensuring NNS has the talent it needs and for the long run.

“Internally, we have an extensive trades training department focused on trades trainings, skills qualifications and special training required for our shipyard,” Bourne says. “This is considered the bread and butter of our training programs, meaning we offer training that external partners are not able to offer.”

Every good shipbuilder requires a host of different skills within its labor force. Welding, however, may be one of the most critical skills to find and secure. It is critical in part because of the amount of welding required to build a ship, but it is also critical considering the lack of skilled welders on the marketplace. To combat that challenge, NNS has been involved in the development and education of welders for countless years.

The shipbuilder currently maintains an active level of involvement with Skills USA, Skills USA Virginia, The Boys and Girls clubs of the Virginia Peninsula, and a multitude of local schools and colleges. NNS is also active in the National Shipbuilding Research Program to research and promote the increase in the number of women in welding. All of these efforts have one thing in common: to support careers in welding for men and women alike.

“NNS is a manufacturing facility that welds materials ranging from carbon steel, high-yield-strength steel and corrosion-resistant steel to nickel alloys and titanium and has welding processes from SMAW welding all the way through robotic GMAW welding,” Bourne says. “Our longstanding relationship with the American Welding Society (AWS) spans more than 50 years. We are a corporate sustaining member of AWS, and we support the organization’s efforts to educate, train and inform businesses, individuals and learning institutions regarding the art and science of welding.”

To that end, NNS employees hold several leadership roles on AWS national and local committees and serve on the board of directors. Employee involvement is wide ranging. As just one example, Lynn Showalter, welding engineer 5 at NNS, sits on the AWS national board of directors, is the director for AWS District 4, vice chair of the Education and Scholarship committee, and serves as a national test supervisor for the CWI and CRI exams. Along the way, he fields questions about welding career opportunities, including those at NNS.

“We’ve also worked with AWS, Lincoln, Miller, Thomas Nelson Community College and Airgas to promote National Welding Month,” Bourne says. “Additionally, we partnered with 3M and AWS to publish a study on the use of personal air purifying respirators and their benefits to welder productivity and safety. Furthermore, we support WEMCO, an AWS sister group for welding equipment manufacturers that provides product feedback and presentations for their members.”

Clearly, NNS and its parent company, HII, have invested greatly in the ways in which it cultivates a successful workforce. Unlike most employers in the nation, however, its efforts begin as early as pre-K.

“HII is committed to workforce development and ongoing efforts to invest in the future generations of workers through education,” Bourne says. “Through the decades, HII has made numerous investments in STEM education programs; partnerships with local high schools, community colleges and technical schools to develop trade-based curriculum; summer internships for both students and teachers; and industry-leading apprentice schools at the company’s two shipyards.”

And, he says that those efforts have been driven by a tone set from the top.

“HII president and CEO, Mike Petters, has identified early childhood education as one of the greatest issues facing our country and has worked hard to raise the visibility of the issue among business leaders,” he says. “We know that we need to begin investing in children early to make sure they are well-prepared to enter the future workforce, so in many respects, we are playing the long game.

“We also know that the achievement gap tends to begin before students enter first grade and becomes exacerbated over time,” Bourne adds. “Among our goals is preventing the achievement gap from opening in the first place. It’s important to note that kindergarten students today will graduate from high school in time to work on ships, like the Columbia-class submarines and Ford-class aircraft carriers, that Newport News Shipbuilding currently has under contract.”

While NNS works to support the next generation in their career endeavors, the company has not forgotten about our nation’s veterans. Through an extensive process of interviews with veterans, veterans’ advocates and human resource processionals as well as through a deep review of company policies and practices, the esteemed Military Times recognized NNS as a “Best for Vets Employer” for the third consecutive year.

“We earned this recognition because of our practices relating to veteran recruitment and retention, our support for the translation of military skills to civilian credentials, our support for military spouse employment and accommodations for employees who are members of the National Guard and reserves,” Bourne says. “For us, this honor recognizes our commitment to hiring, training and retaining the men and women who served, and will continue to serve by building our nation’s warships.”

Overall, NNS knows that to build strong vessels, a strong workforce is needed. NNS also knows that to do so requires a commitment to community and those who have given everything to protect the freedoms of the United States.