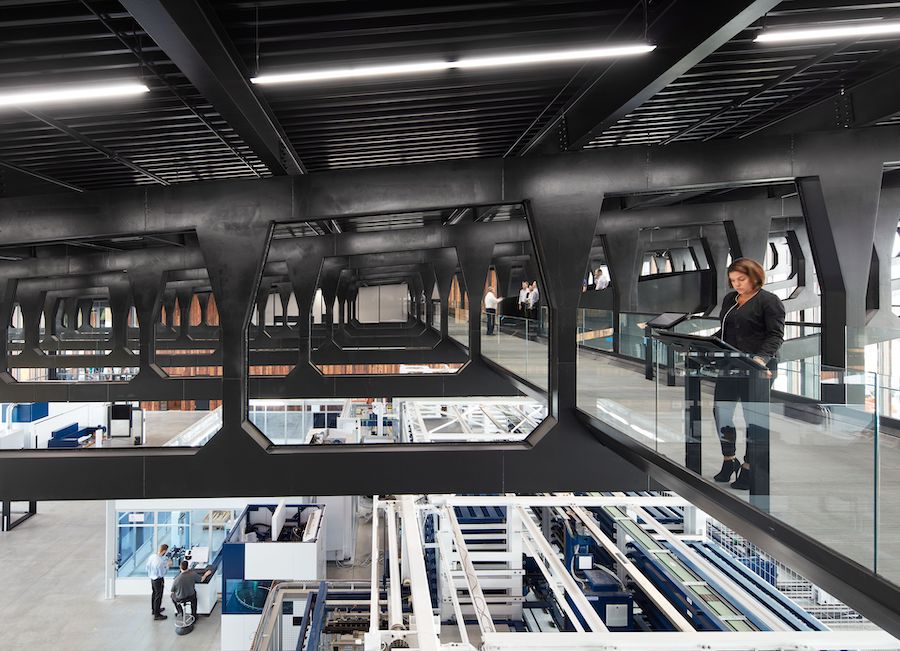 The old adage “Rome wasn’t built in a day” is a reminder that it takes time to build something great. In the context of Industry 4.0 and the shift toward fully autonomous smart factories, it’s a phrase that shouldn’t be forgotten.

“Trumpf built a fully operational smart factory, and as a fully autonomous, fully connected factory, it’s the North Star for the industry,” he says. “But, for most customers, the journey to realizing a smart factory of their own happens step by step. Rarely do we have the situation where there is a brand-new building that we can build up into a new fully automated factory.”

More often, companies want and need to keep their existing equipment and staff as they slowly transition into the autonomous, fully digitalized world of Industry 4.0. Growing step by step – adding an automation feature here, a machine there and phasing in new technology along the way – is easier to envision and enact.

“So yes,” Zimmermann says, “the journey toward a smart factory is for everyone.”

The benefits of establishing a smart factory are sometimes too great to count. It addresses a variety of issues, including the ever-present skills gap, today’s aggressive turnaround times, quality control and business transparency. Fortunately, many of those benefits can be realized even during the initial phase of implementation.

“Actually, we’ve never had a customer where we couldn’t establish a starting point for their step-by-step journey toward a smart factory,” Zimmermann explains. “We recommend to many customers that parts tracking or machine monitoring would both be good starting points.”

Tackling either doesn’t require a state-of-the-art laser cutter, a fleet of new robots, fully connected information systems or any new equipment at all, for that matter. Fabricators can get started with the equipment they have.

“In regard to machine monitoring, you can gather signals, even from an older machine, that indicate when it’s on or off, which will make your operations more transparent,” he says. “You could also bring in an app system where you can access operational information from home or while you’re on the road.”

For parts tracking, Trumpf’s Track & Trace solution gives greater visibility to where a part is in the overall production process. The goal is to optimize the delay between processes and to track how material flows through the shop. With this capability, customer service improves. When a customer calls asking for a status update, the part can easily be tracked via satellite, pinpointing exactly where it is in the shop.

Parts tracking and machine monitoring offer enhanced transparency, and the data that comes with those activities can be analyzed to identify further areas for optimization. These first steps toward the bigger goal don’t require substantial investment dollars and don’t require a team of software engineers, either. They simply require the willingness of a company to embrace the smart factory concept.

Establishing a smart factory also comes with a slew of ancillary benefits. Consider the fact that fabricators spend around 80 percent of their time in indirect processes, such as loading and unloading and sorting parts. That means that only 20 percent of their time is spent in true production, such as cutting and bending. But more often than not, when a company undergoes an optimization process, most of its efforts are focused on direct processes.

Conversely, when parts tracking and machine monitoring are the initial focus, company leaders can garner quick insight into indirect processes that they might not have had otherwise. A good example is machine downtime. By analyzing a machine’s uptime and downtime, business owners can pinpoint issues, such as a machine operator that is constantly held up waiting for material or perhaps taking excessive breaks. Without a machine monitoring initiative, these bottlenecks continue to fly under the radar, piling up in lost time and revenue.

“In the past, equipment manufacturers, including Trumpf, focused on making machines faster, but that was only part of the picture because you’re only optimizing 20 percent of your total production time,” Zimmermann says. “You have to look at the entire process, including those indirect processes. Take parts tracking from a standalone laser cutting machine to a standalone bending machine as an example.

The goal is to ensure that no time is lost after a part has been cut and when the next operation is initiated.”

“When companies start small, they can stably invest into bigger components, such as a new storage system or automated cutting,” Zimmermann says. “It’s hard enough to find skilled workers and even more so to find people to sort parts. Automated products of all types will be used more and more in the future and should be integrated into the smart factory plan.”

Automation can also be added incrementally. A shop can start with automatic machine loading and unloading and can grow into a complete storage system. Trumpf is designing all of its products as modular systems, allowing customers to add features when they’re ready.

Along the way, Trumpf can help customers make strategic decisions for next steps. The company has a consulting division that does on-site consulting to define the step-by-step phases for each customer’s optimization roadmap.

“We help our customers take a deep dive into each solution based on their current needs and what they can invest in during the short term,” he says. “And from there, they’ll have the tools to grow their businesses.”

With any new business initiative comes questions of staffing. Does the idea of a smart factory redefine the type of employee that a company might need to hire? Does the company need to hire candidates that are savvy with software?

For Zimmermann, the most important employee trait is open mindedness. “The methods that worked in the last 30 years might not work in the next 10 years, so it’s important to be open to change,” he says. “In the upcoming years, manufacturing roles in the United States will change tremendously.”

Twelve years ago, when the iPhone first came onto the marketplace, it was part novelty, part luxury item. Today, consumers rely on smartphones for everything – to check bank account balances, order Ubers, find a parking spot and so on. Industry 4.0 could catch on even faster.

Zimmermann concludes by saying, “You’ll need the same portfolio of staff that you needed before. You’ll still need machine operators and you’ll still need mechanical engineers. You won’t need only software engineers in the future. No matter the role of the employee, it will be very helpful if they are all open minded and excited about these new technologies.”

Overall, taking the journey toward the smart factory in small steps reduces business risks significantly. “When any customer talks seriously about growing their business over the next 10 years, for example, they talk about spreading it out into small phases,” Zimmermann says. “It’s the smart way to do it.”