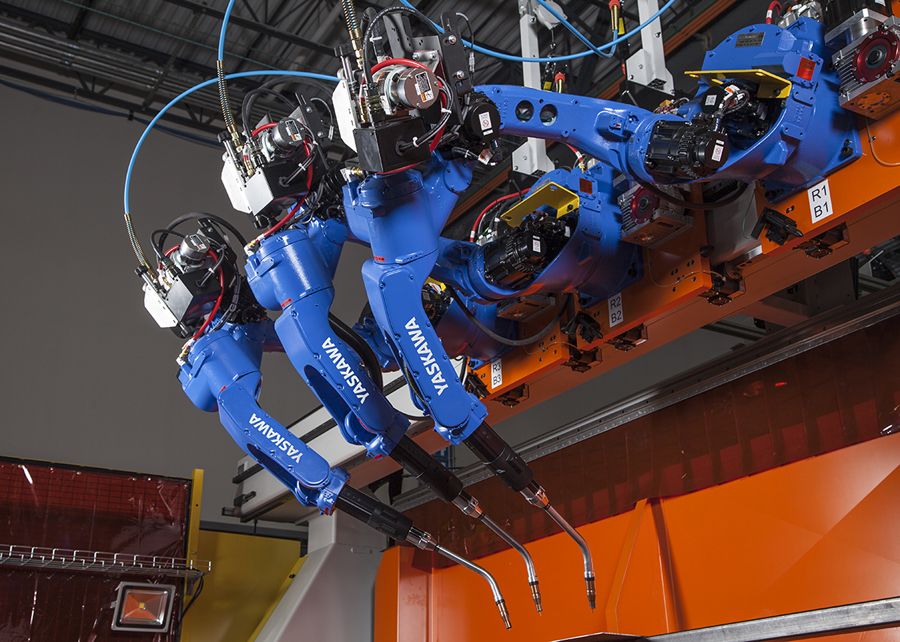 The American Welding Society last updated a version of its “welding shortage fact sheet” almost a decade ago. So, clearly, the issue regarding the skilled welder shortage is nothing new. But that doesn’t mean that the shortage isn’t being felt today in job shops throughout the country. And while there aren’t as many welders out in the field as there were a decade ago, the demand for high-precision welds still remains.

The welding equipment industry, therefore, is committed to providing solutions to account for the lack of skilled welders. It’s responding with products that fit the needs of today’s job shops and small businesses where welding is a priority. Yaskawa Motoman has built a line of all-in-one robotic welding systems called ArcWorld that include an optional Kinetiq Teaching component, which can significantly reduce the amount of time – and experience – it takes to complete a welding application.

“You and I aren’t going to accept an inferior car,” says Glen Ford, product marketing manager for Yaskawa Motoman, giving an example of how the skilled welder shortage could affect consumers. “We still want the welds to be good so our car doesn’t fall apart when we’re out on the road. Standards still have to be met. We’re looking at automation and standardization and coming up with new ways to address those needs.”

Yaskawa Motoman’s most recent offering, the ArcWorld C-30, the company’s most compact all-in-one system in the ArcWorld line, tackles a number of customer needs that can be attributed to the shortage of skilled welders and to the desire to make better parts in less time with less cost.

For job shops, flexibility is a major plus. Owners don’t want to turn down orders, which is sometimes the case if the application doesn’t fit their current welding workcell capacity, workforce availability or shop floor layout. They might not have the option, for example, of unbolting safety walls from their floor and moving them to a more convenient location.

“They still want to produce good quality, replicable pieces,” Ford says. “The ArcWorld C-30 takes components that we already know about: the welding equipment, the shielding, the table, and it puts them into a framework. None of the ArcWorld C-30 components themselves are brand new, it’s just more compact and offers ease of use for the new guy.”

The ArcWorld C-30 isn’t built for a job shop that’s producing the same parts in multiple shifts over an extended period of time. Rather, the system is designed for a job shop with multiple customers having different jobs that require specific applications for limited runs. Therefore, the system can easily be reconfigured for every new application – its welding table is built for customized part fixtures.

“Those job shops,” Ford says of the C-30 users, “don’t know what they’ll be welding two months from now, so they want to be able to reconfigure their workspace.”

Ford says they are seeing more interest from job shops already using larger ArcWorld systems that want to use the C-30 positioned near the larger system, feeding it the parts needed for the larger application.

“We’re getting some interest with people saying, ‘hey, this makes sense because I don’t have to bolt everything down,’” Ford explains about the all-in-one component, meaning users don’t have to use safety panels that are often bolted down or heavier equipment that is also bolted down to the floor and basically a permanent fixture on the shop room floor.

In some situations, customers have had difficulty ordering the parts they need for the bigger process, so they bring in the ArcWorld C-30 to make those parts in-house at a fast pace. 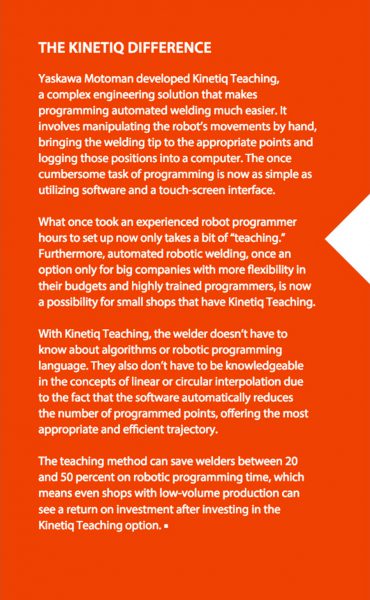 Build to the need

Yaskawa Motoman spoke with customers about their needs, which informed their design of the compact ArcWorld C-30 (C stands for compact). Customers want a robotic welding system that is easy to set up and can be reconfigured to fit their workspace today as well as when those space requirements change in the near to distant future. They want a system where safety is a priority while also allowing them to produce smaller parts more efficiently.

“Those were the driving factors when we started putting it together,” Ford says of the ArcWorld C-30, the company’s most compact all-in-one system in the ArcWorld line. “That’s why this footprint makes sense. It’s not that we took a larger workcell and said, ‘let’s make this smaller.’ What we did was look at what our customers needed.”

There is also safety to consider, and the ArcWorld C-30 complies with U.S. and Canadian safety standards. A barrier guarding has a solid sheet metal side and back wall. Other safety features include a single point of operator control, enhanced E-stop functionality, integrated speed monitoring, a functional safety unit that monitors the robot and a manual brake release for the robot.

The ArcWorld line includes six other large base series, which come in as many as four different models per series. The V-6000 series, for example, is the largest system, made for high-volume work and can be equipped with multiple welding robots for high-performance welding applications. While it’s the largest workcell in the ArcWorld series, it takes up 44 percent less workspace than workstations where the robots are mounted in an overhead configuration.

While the customer is always focused on cost, Ford says the return on investment is equally important. For instance, the ArcWorld C-30 – as well as the other models in the ArcWorld series – has the optional Kinetiq Teaching component (see sidebar), which adds to the cost of the unit. However, if it’s going to save the customer money in 12 months, from a business perspective, Ford says it makes sense to invest in the add-on.

“Our approach is to find out if it makes sense for you,” he says, adding that if a customer wants to teach the robot 100 different weld points, they might be better off rethinking their process. However, for the right applications, Yaskawa Motoman has found the Kinetiq method to be 30 percent faster than the independent method.

Ford says that with the Kinetiq Teaching component, a job shop’s master welder can set up the process and someone less skilled can come in and feed the materials and run the parts.

“Technology is great,” Ford says, “but if it doesn’t help you do something better or faster, or save you money, then it’s just technology.”