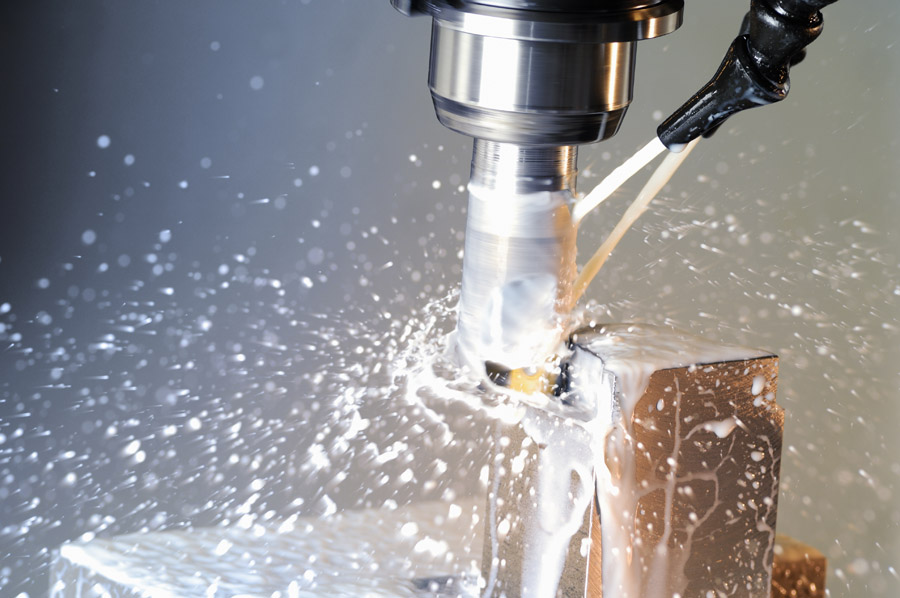 Metalworking applications that require coolants or lubricants – like many used in automotive manufacturing settings – produce aerosolized particulate made up of tiny oil droplets. While these droplets are often too small to be seen by the naked eye, they can cause significant complications if they make their way into electronic components or workers’ lungs.

Many companies make the mistake of treating these tiny liquid droplets the same way they would treat dry particulates produced by welding or dry cutting and grinding. Most oil mists, however, have their own unique set of exposure risks, regulatory requirements and collection challenges. Understanding the differences can help companies make better decisions for oil mist capture and filtration. 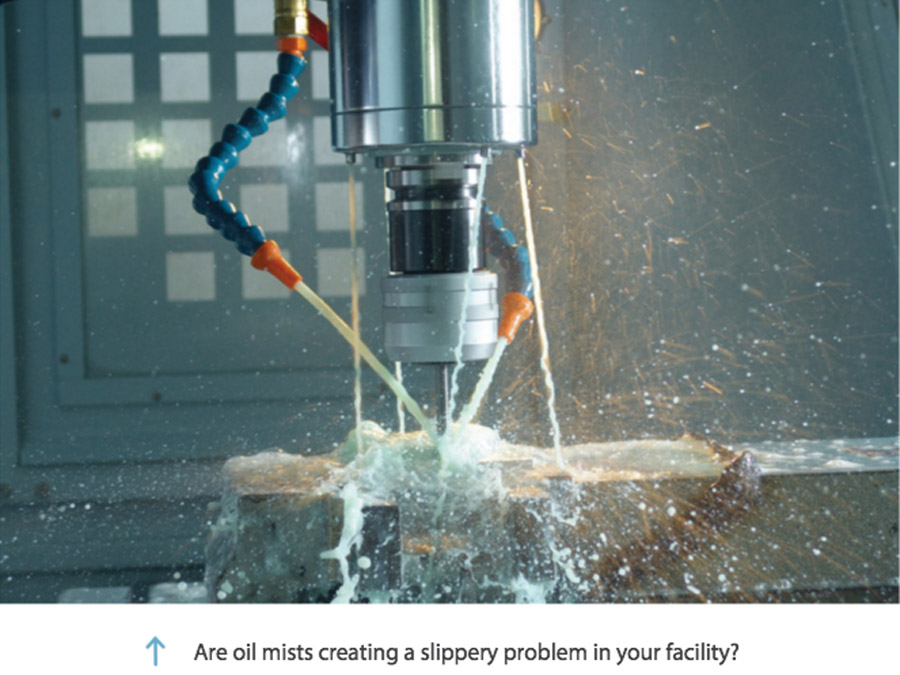 Metalworking fluids (MWFs) are widely used in manufacturing, especially within the automotive industry. High-speed machining used during the manufacture of engine or transmission parts and other drive-train components usually requires a coolant. MWFs are also used during stamping for automotive body parts.

When these MWFs are aerosolized during machining, cutting or stamping processes, they create fine mists that disperse into the surrounding air. The nature of these mists depends on the type of MWF involved and the manufacturing process. High-speed processes tend to produce a lot of heat, creating thermally generated, microscopic droplets while lower speed cutting, grinding and machining processes produce larger droplets.

MWFs can generally be categorized into four types with different properties and recommended applications. 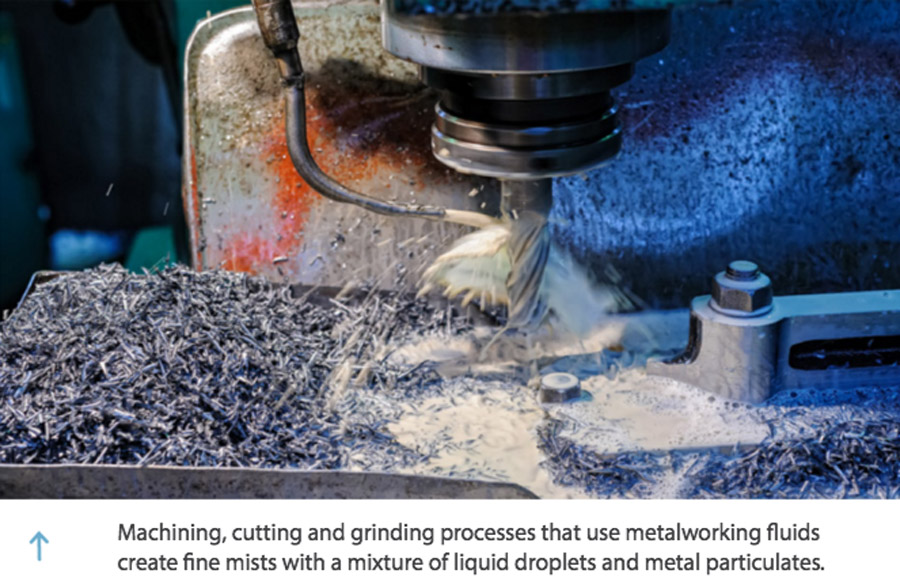 Uncontrolled oil mists create problems for people and equipment. The most immediate and obvious risk associated with oil mists is slipping and falling. Unlike the dry particulates in weld fumes, which tend to stay in the air until collected or dispersed, heavier oil mist droplets coalesce as they cool and fall out of the air onto horizontal surfaces. If they are allowed to accumulate on floors and steps, they can create a significant slipping hazard.

Oil mists have more insidious and longer term impact on human health when they are inhaled. These risks depend on the type of oil (e.g., petroleum-based vs. synthetic), the additives used in the MWF and the way the mist is generated.

High-speed or thermal processes tend to produce smaller droplets that can be inhaled deeper into the lungs where they can cause more problems for human health. All oil mists can produce respiratory irritation, and prolonged exposure has been linked to asthma, chronic bronchitis, impaired lung function and fibrosis of the lungs.

MWFs can also cause skin irritation or contact dermatitis when they settle on exposed skin, and some MWFs are considered carcinogenic. When cutting fluids are reused, they can also become contaminated with disease-causing microorganisms that can become aerosolized with the oil during use. 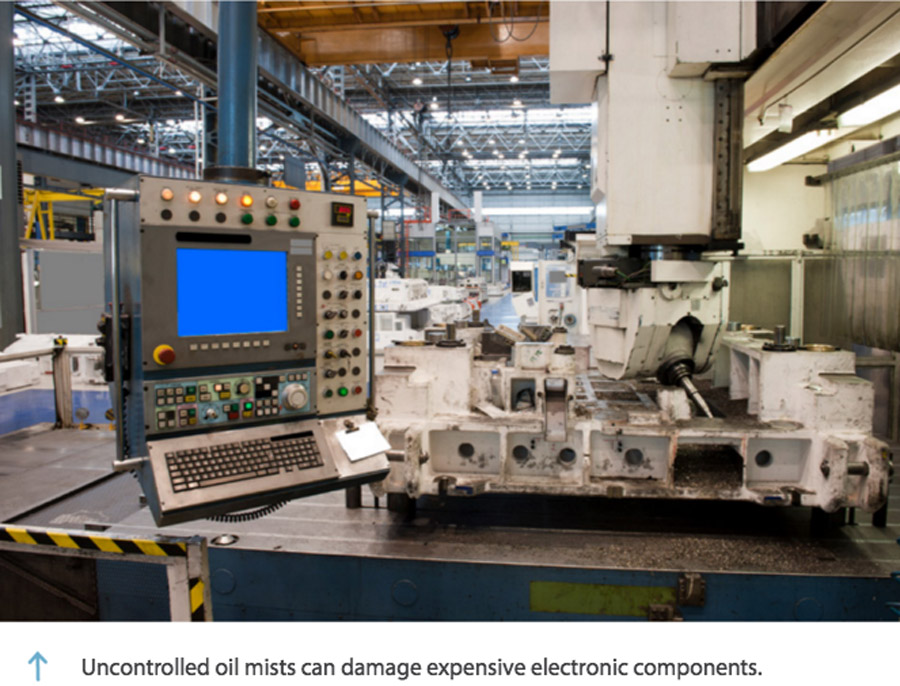 While these are the only regulatory limits set for oil mists, it is important to note that the National Institute for Occupational Health and Safety (NIOSH) and the American Conference of Governmental Industrial Hygienists (ACGIH) have stricter recommended limits for oil mists, especially for non-mineral-based MWFs. These are based on studies demonstrating higher incidence of asthma and diminished lung function at lower TWA exposures.

As more companies switch from straight oils to synthetics, it’s important to keep in mind that there is much still unknown about the exposure risks related to synthetics and, especially, the detergents, emulsifiers and other additives used to increase their performance. Companies should err on the side of caution and reduce oil mist exposures as much as technically possible, even for non-petroleum-based MWFs.

Regarding the recommended exposure limit by NIOSH, thoracic particulate mass (TPM) is a different way to measure exposure levels. The TPM is the fraction of inhaled particulates that are small enough to pass beyond the larynx when inhaled. Respirable particulate mass (RPM) is smaller still: small enough to penetrate into the ciliated airways in the lungs. Translating the TPM limit to a general PEL depends on the properties of the oil mist. Thermal processes, which generate smaller oil mist droplets, produce a larger ratio of thoracic and respirable particulate mass within the overall sample. 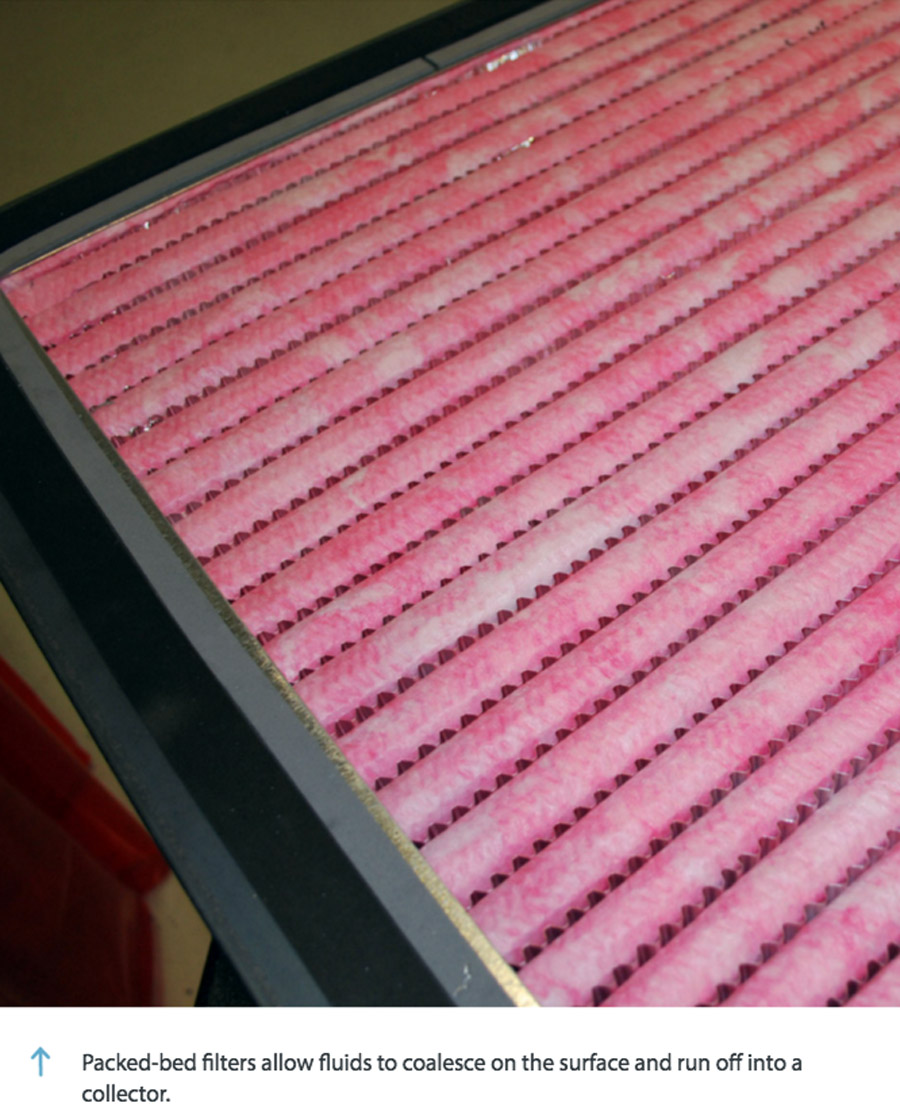 There are several important things to keep in mind when designing a collection system for oil mists.

Don’t treat oil mists like dry particulates. Oil mists require specialized equipment for collection of wet particulate matter and a completely different type of filter. Filters created for dry particulates such as weld fumes or dry grinding dusts will quickly become clogged and ineffective if they are used for oil mists. Wet mist collectors like the RoboVent Clarion Series pull mist-laden air into the bottom of the collector where larger droplets can fall out of the air before air is pulled into the filter media.

Use the right kind of filter. Packed-bed filters, also called coalescing filters, are the most effective filters for most oil mists. They are designed to capture tiny droplets on the fibrous media, which then coalesce into larger droplets. When enough liquid accumulates, it simply drains off of the filter media into a collector. The filters continue to work even when fully saturated and continually clean themselves as liquid drains off. The collected MWF can then be further filtered for reuse. 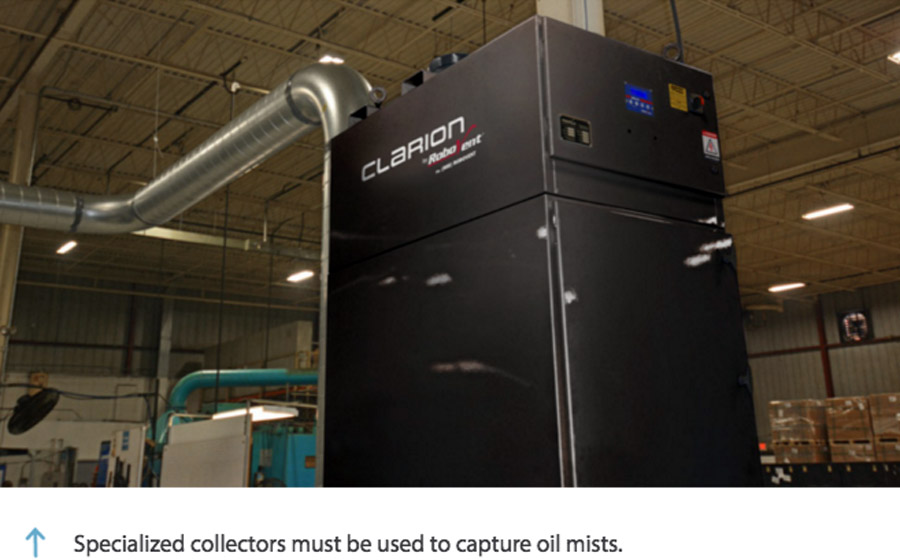 Collect oil mists as close to the source as possible. Source capture should be the first line of defense for most metalworking applications that produce oil mists. In the automotive industry, most machining and stamping can be easily contained under a hood or other type of enclosure. Make sure the enclosure is the right size for the application. The smaller the enclosure, the less air is needed to move to collect the oil mists. This makes the system more cost-effective and energy efficient. For enclosed CNC stations and other hooded applications, negative pressure is maintained inside the enclosure to keep oil mists from escaping and make them easier to collect.

If you’re not sure what your current exposure levels are, the first step should be an evaluation. If you have a visible oil mist problem in your facility, chances are your exposure levels are above recommended limits to protect people and equipment.

Oil mists are more challenging to control than dry particulates, but there are good solutions available. An experienced air quality engineer can help you understand your current exposure risks and design an effective oil mist collection solution for your application.