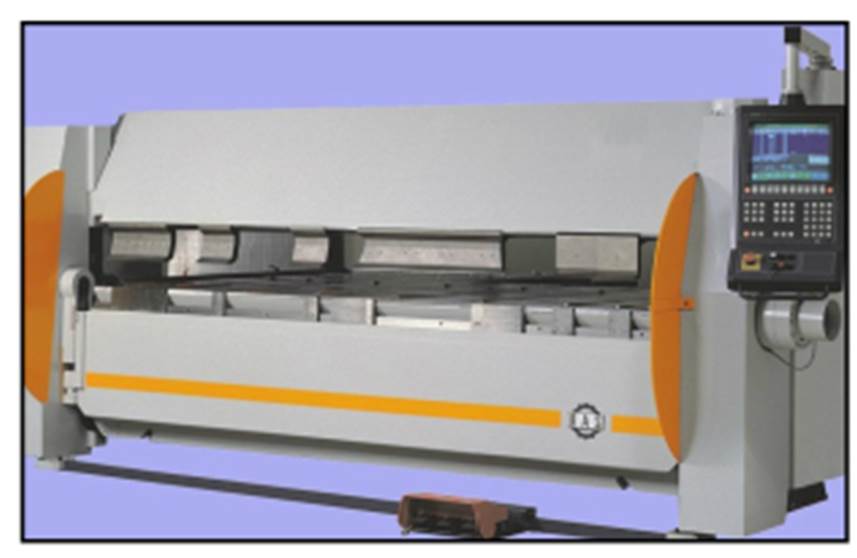 The CNC controlled metal folding machine is becoming more popular with the North American metal component manufacturer. Admittedly the folding machine lags behind the press brake in numbers of machines, but that number has certainly increased in the past few years.

Tools allow for multiple setups along the width of the machine.

The folding machine improves the above process because we turn only the flange and not the overall like a press brake. The folder supports the overall of the blank on the backgauge sheet support system and only folds the flange per the program. Another big advantage to the folding machine these days is the addition of being able to fold the flange not only up but also down. No more flipping the part to achieve a negative flange. The operator simply loads the part and the machine will fold side one up and down as programmed. When side one is completed the operator simply rotates the part to the next side. This process is repeated until all four sides of the part have been folded completely.

Should a tool change need to be made during this process, no problem. On certain models, an automatic tool changer does the setup and can change the tools during a part production. We at RAS Systems do not look at a press brake as competition. The challenge for us is to get the customer to examine the application. Press brakes and folding machines can and should coexist on the fabrication floor. Both types of machines are application driven and applications should be considered before making a purchase.

During bending, the folding beam rotates up around its pivot point and then rolls away from the material. It’s like folding a paper airplane: first you clamp the overall part and then you bend the flange up to the desired angle. Because the movement between the tools and the material surface is virtually eliminated, folding creates minimal or no material surface damage. This is especially important when bending sensitive-surface material such as stainless steel. Even lacquered and coated metal can be folded with no shoulder marks from the punch and die.

Folding machines don’t allow the material to slip or move during the bending process. For this reason, folding machines can bend perforated materials with repeatable flange dimensions

The integrated sheet support and backgauge system positions the part, instead of an operator trying to hold a flange against small backgauge fingers. Because the folding beam always references the overall of the material instead of the flanges, variations in material thickness do not influence the folding result. Sheet size intolerances are folded into the first flange, so all other flanges and the length and width of the part always produce the correct dimensions.

The folding beam, clamping beam and upper beam are all equipped with segmented tools for internal bends and other applications. RAS folding machines come standard with an automatic crowning system. There is no need for operator involvement with this system. Simply put the control in the teach mode when folding the first part and with each bend of this test part the folding beam will rise 10-degrees against the flange and then return to home position. At this point, you will hear the motor turn. These motors are setting the amount of crowning for the resistance the machine indicated during that 10-degree first bend. The folding beam will then make the bend as programmed. This will happen on each bend until the part is completed. The crowning for this part is not set; the teach mode will be turned off; and production can start. The operator does not have to know material thickness, length or depth of the flange or tensile strength of the material. The RAS crowning system is simple and spot on. First part, good part.

Precision up and down folding.

From an Operator’s Point of View

Folding machines without a tool changer allow for multiple-station setup along the working width of the machine. Parts with numerous bends and different bend angles, open or closed hems, and bends inside the part can be finished with one setup and one handling. The part stays on the sheet support system and is positioned by the backgauging system so the operator doesn’t have to lift the part. Therefore, even large parts can be run by a single operator. The idea is to pick up a blank and put down a completed folded part in one handling by one operator with one setup.

Some machines offer a CNC that shows a library with finished part icons. With the icon system, the operator selects the desired shape, inputs the variable flange or angle dimensions, and presses a button. The CNC automatically programs the part and shows the bending sequence. With a Touch Screen control the operator can draw a part with just a point and click. The library shows the shape of the part, so a single master program is good for an entire assembly. The operator can quickly update the program later if the design changes.

Folding machines are also safe to operate. Operators do not support the weight of the material and they are not in contact with the workpiece during the clamping and bending cycles. This makes them inherently safe to operate. Light curtains and/or safety mats can be added should the end user desire such components.

Flexible production of small batch sizes or single parts production requires a very short setup time. Typically, a folding machine uses a single, universal set of tools to bend a very wide range of applications, regardless of the angle, flange dimension, metal thickness, or metal type; different upper beam tools are not needed. This results in fewer tool changes and shorter setup times, making the folding system suitable for short-run applications. This also makes for a very
small inventory of tools for the folding machine.

Tooling can be segmented for all of the beams. For example, to bend four-sided boxes, a segmented upper beam called front-free or rear-free goat’s foot tooling is available.

Important considerations for tool choice include:

JIT short-run metal forming goals can be achieved with quick-action tool clamping, which allows the operator to configure a different part size in seconds. No additional wrench or devices are required on systems that automatically lock the upper and folding beam tools into position.

As soon as the operator turns a keyswitch to the on position the tools are locked into place.

In addition, the computer numerical control screen can provide graphical setup information, stored together with the program. The operator takes the tool segments shown on the screen, places them along the required working length of the beam, and is ready to run the next part. Changeover to another part usually takes from two to five minutes.

The bottom line is that a folding machine could dramatically improve the throughput and production in your fabrication facility. This technology has been very popular in Europe and has now become a very successful option for the North American sheet metal manufacturer. 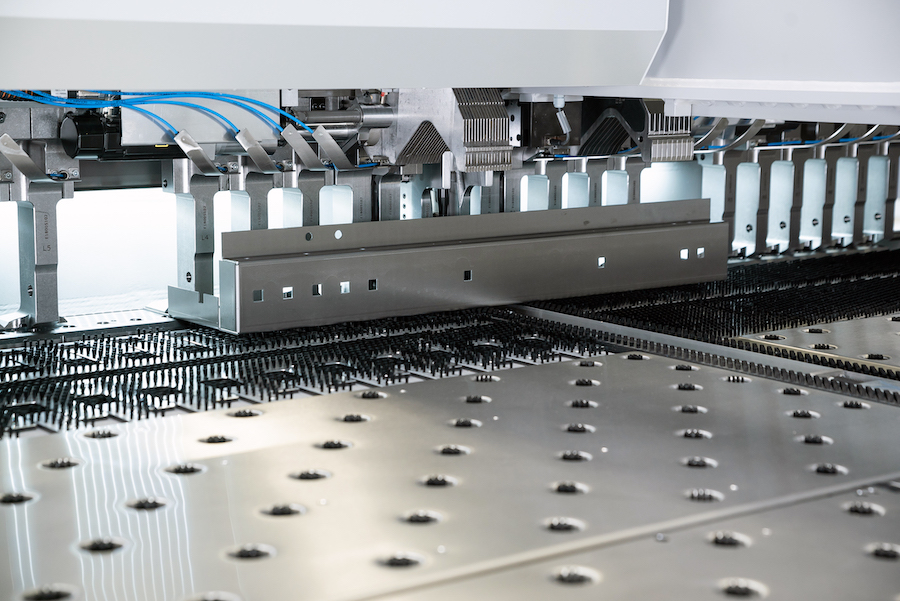