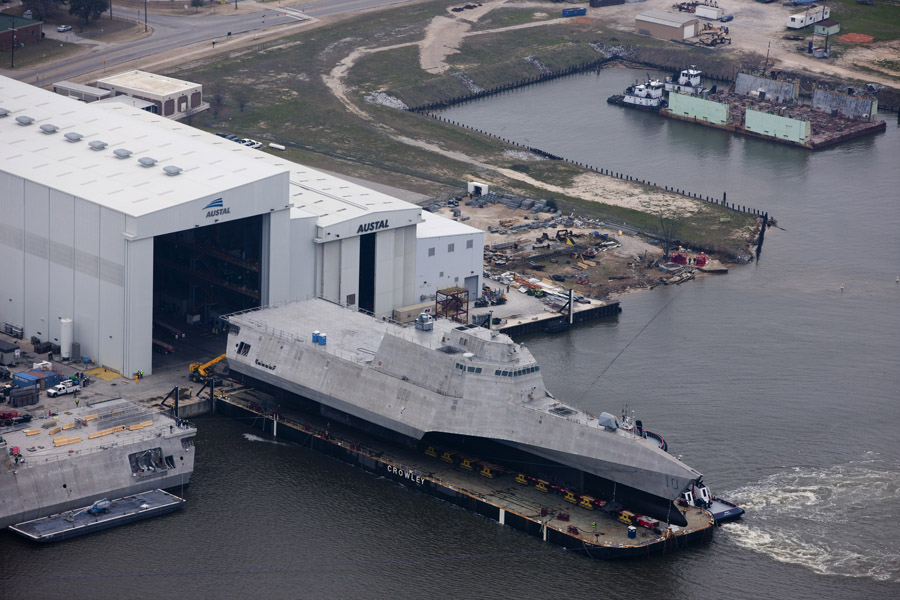 To some degree, building a ship isn’t much different than building a home. As a home is being erected, two-by-fours are cut to length to frame the structure and stabilize the walls. In addition to being cut to length, these joists and studs require carpenters to notch and drill holes in them in order to run plumbing lines, electrical wires and ductwork throughout the house.

Similarly, the framework for a ship’s hull helps a vessel withstand the strong shearing, torsion and tensile forces experienced crossing oceans, seas and large bodies of water. The framework includes bulkheads, floors, frames, stringers and beams, all of which are referred to as stiffeners. Like the studs used in home framing, stiffeners must be cut to length and must also include holes and slots to accommodate the various utility lines that run through a ship. 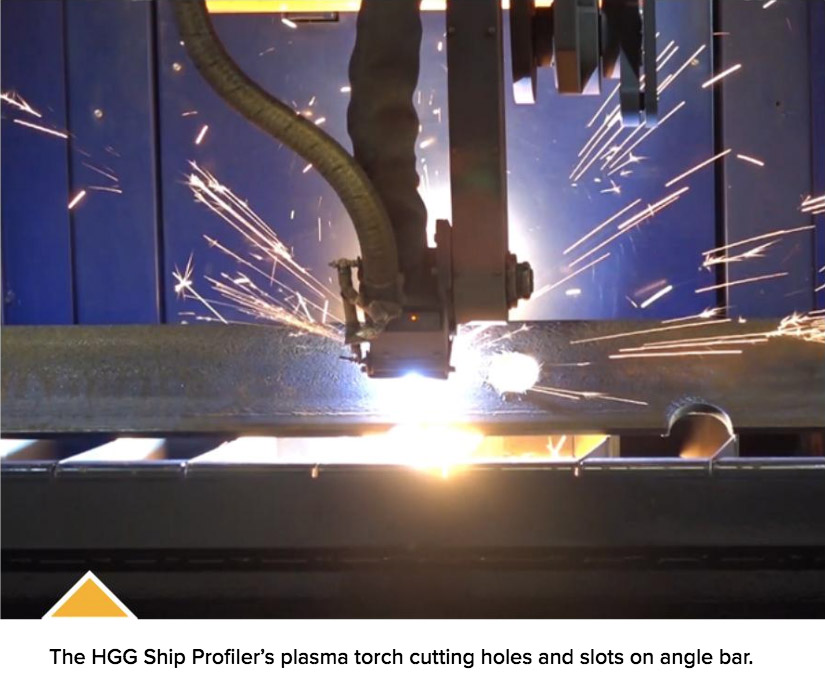 In some shipyards, the holes and slots aren’t cut until after the hull has been assembled, which means they must be cut with a handheld plasma torch. In addition to the tight spaces that must be navigated, the process is complicated due to the shear number of slots involved and the secondary operations that are required, such as grinding down rough edges.

“Before HGG invented its automated profile cutting line, or PCL, shipbuilders had to assign where the holes and slots needed to be, measure everything out and then cut it all by hand,” says John Tutino, sales manager, Americas, at HGG Group. “The PCL’s automation brings in the raw material for edge cleaning and shop blasting and then moves it onto the plasma cutting machine. Eventually, the PCL moves the stiffeners into slots in a large cassette that are then welded into the large sections that eventually are assembled into the hull. It’s a huge process.”

Additionally, smaller shipbuilders sometimes don’t have the amount of available real estate required for the PCL and the distances that the stiffeners are moved through the overall automated system. So, with its longstanding reputation as a 3-D cutting specialist, HGG set out to develop a solution specifically with these shipbuilders in mind.

With a small footprint and a big range of capabilities, HGG’S new UPC 450 Ship Profiler increases cutting and pre-fabrication productivity at small to mid-size shipyards by eliminating the need to cut stiffeners and handle secondary grinding by hand. Like its bigger brother, the PCL, the Ship Profiler is packed with automation, including stiffener and 3-D profile cutting with optional tube cutting. And, it all comes in a package that is affordably priced.

“The Ship Profiler allows an operator to place a stiffener on the cutting table where it then reads a program, scans the material and moves down the length of the material to cut all of the slots and profiles that are needed,” Tutino explains. “It can handle flat bars, bulbs and angles as well as tubular pipes.” 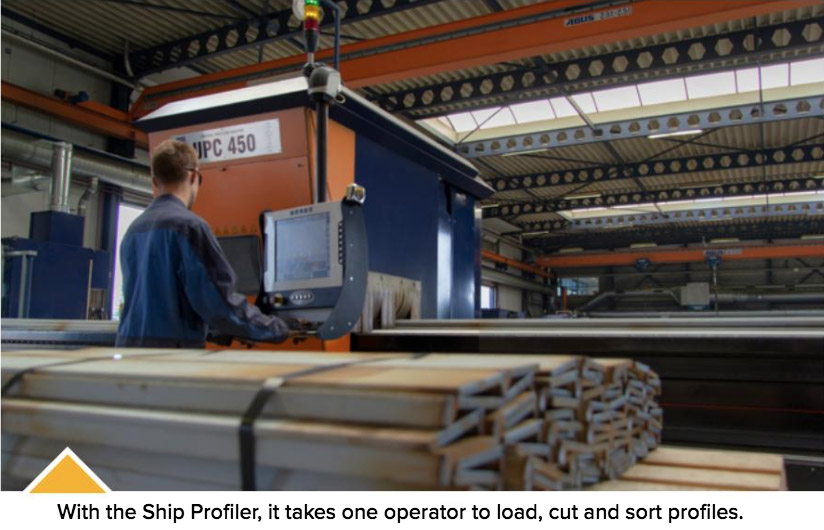 A cutting trolley within the Ship Profiler’s cutting cell controls the movement of the material while HGG’s patented plasma cutting head and biaxial cutting torch enable high-precision accuracy. Knowing the space constraints many smaller shipbuilders face, the Ship Profiler can be configured to accommodate a variety of footprint requirements.

“Before the Ship Profiler was available, smaller shipbuilders would opt to do things the manual, more time-consuming way before ever considering investment in a million-dollar machine,” Tutino says. “But now, we have a solution – and at one-fourth the cost – the UPC 450 still offers productivity and accuracy, but without that big, prohibitive footprint.”

In terms of the productivity increases shipbuilders can expect, Tutino says that the team at HGG conducts time studies for potential customers. Currently, HGG has a Ship Profiler at its cutting service department, which is leveraged to conduct these types of studies.

The accuracy, price point and size of the Ship Profiler are music to smaller shipbuilders’ ears, but they aren’t the only benefactors of the system. Unsurprisingly, shipyard laborers benefit, too. Imagine doing it the old way: struggling to get a stiffener out of a bundle, measuring and marking everything by hand and then taking a plasma torch to cut everything – and then, after all of that, having to grind down the cut edges.

“Maybe your hand is steady in the morning, but by the afternoon, you’re getting tired and shaking more,” Tutino says. “And then you have to get out a grinding wheel. It’s tedious, tough work for the laborers, and with all of the manual work and secondary operations, the labor costs keep going up and up. With the Ship Profiler, you place the raw material on the cutting bed and let the equipment handle the rest.” 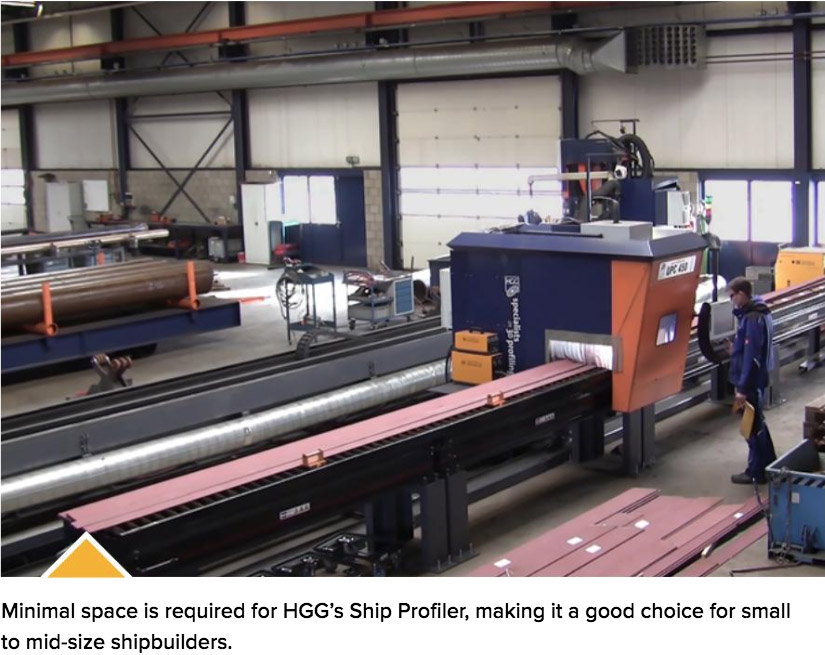 In addition to easing the operator’s job, the Ship Profiler also aids in employee hiring and retention efforts. For starters, it eliminates the need for an experienced layout person and welder. And in the long run, employees are more apt to stay on the job when the responsibilities are less physically rigorous. 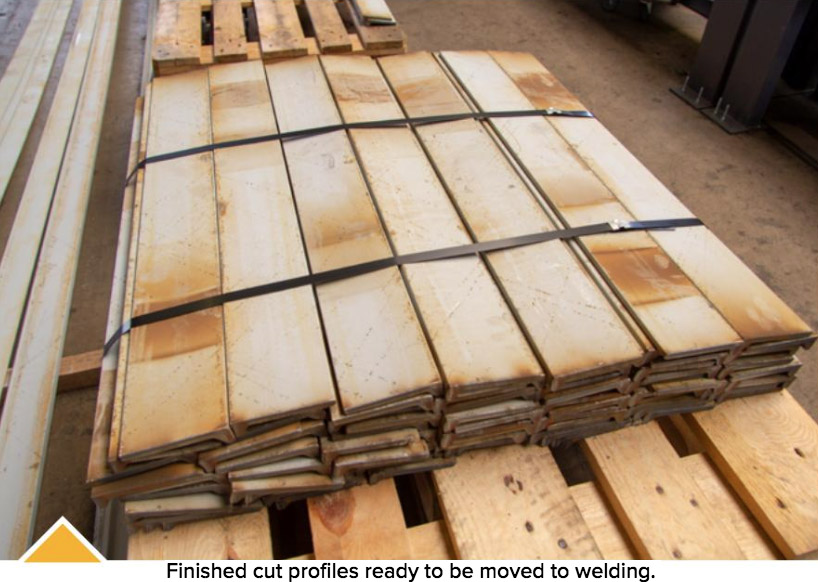 Another employee-centric feature included in the Ship Profiler is its integrated fume extraction. To maximize worker health and safety, the machine includes two fume extraction modules, safely capturing and disposing the dust, smoke and fumes created by plasma cutting.

“With OSHA coming down harder and harder on these guys to keep the air clean, they’re going to need these types of features in all of their machines,” Tutino says. “Beyond OSHA mandates on air quality, the dust collector truly improves an operator’s working conditions.”

To simplify the plasma cutting process, the Ship Profiler includes HGG’s ProCAM software suite, which integrates thermal cutting ProCAD design, ProGram work preparation coordination and the company’s internationally recognized 3-D plasma cutting intelligence. Shipbuilding software is very specific, so HGG felt it was important to make those dedicated programs available to new customers. The ease of use reduces the time involved to make quality and accurate cuts and, therefore, reduces overall labor costs. And operators like it, too.

“Our controller is graphic-driven so it’s just a matter of initializing the starting point and selecting the correct program to execute, and the operator is ready to go,” Tutino explains. “Once the parts are cut, he parks the machine in the home position, lifts the cut parts off of the table onto a cassette and moves them to the welding station.”

Furthermore, the Ship Profiler features a scanning device, which is important because no two raw materials are the same. It scans the area that needs to be cut, alerting the robot arm to what kind of profile it’s dealing with and how to execute that particular cutting routine. 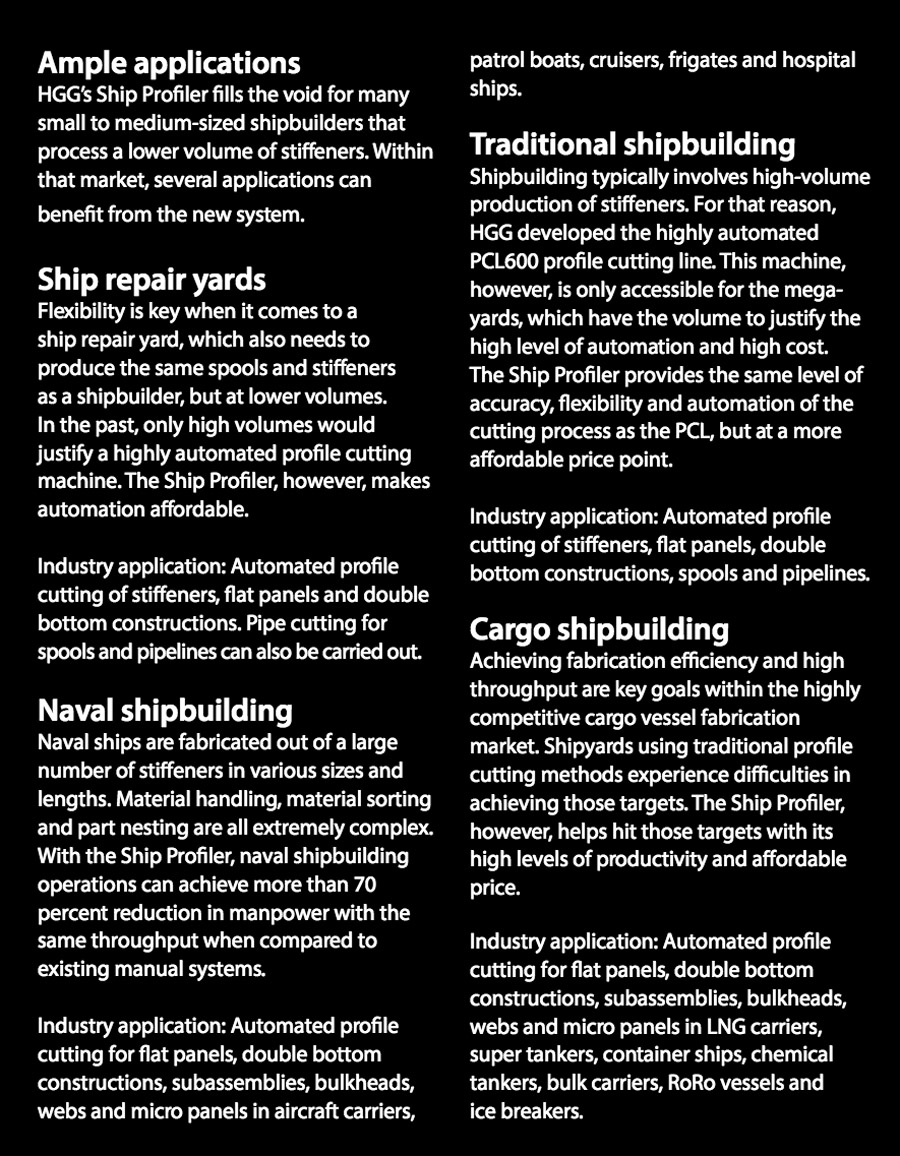 An additional, optional feature is also available for shipbuilders that need to cut pipe, which can be added to the system at any point in time. Thanks to the ability to customize the overall machine based on the customer’s needs, the pipe cutting feature can also be integrated in a space saving way. Tutino says the easiest way to describe the system is that it’s like a Lego set that can pieced together in a variety of ways.

“Smaller shipbuilders build smaller ships, so the quantity of stiffeners they need to process is less than their larger counterparts,” Tutino says. “But their needs for productivity are just as great. No matter the size of the ships being produced, the concept behind building them is the same. We’re proud to be able to offer this segment of the market proven, existing technology that they can count on.” 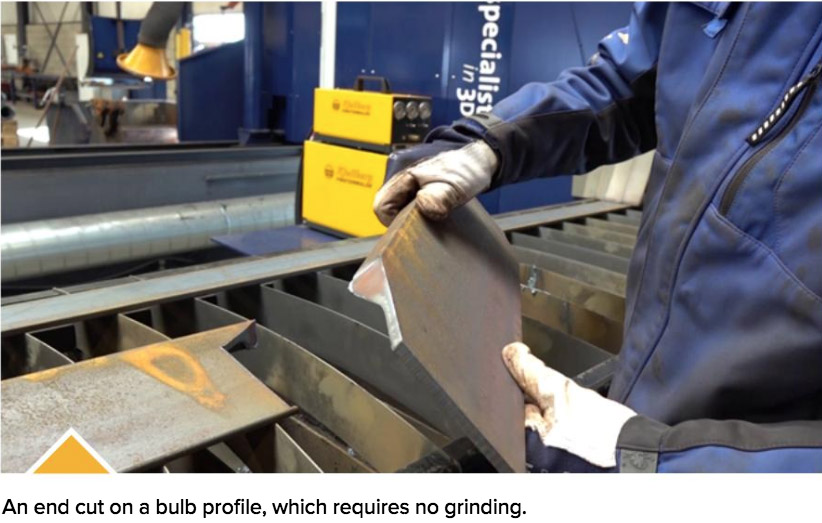