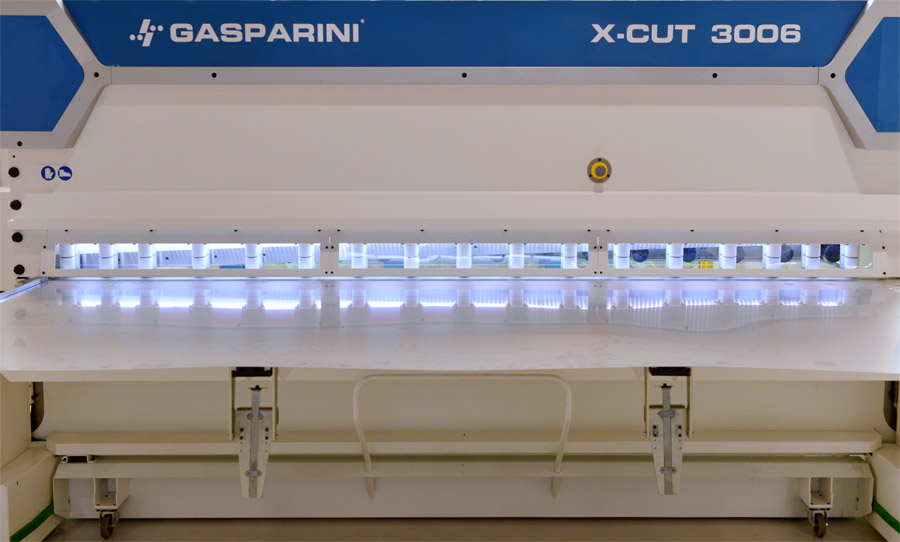 Shearing is a metal fabricating process used to cut (shear) straight lines on sheet metal between the edges of two opposed cutting tools. The first step in the process is to clamp the material with blank holders. Once the material is clamped, a moving blade comes down across a fixed blade with the gap between them determined by a required offset.

The moving blade may be set at an angle to shear the material progressively from one side to the other; this angle is referred to as the shearing angle or rake angle. A higher shearing angle decreases the amount of force required but increases the stroke.

As far as equipment is concerned, the machine consists of the items indicated in Figure 1: a shear table, blank holders (F), upper and lower blades (A, E), and a backgauge (G), used to ensure that the material is being cut where it is supposed to be. A back support is often found to support the sheared material with optional automatic unloading or stacking.

To get a perfect cut, a high-quality shear that is able to reduce the effects of variable sheet metal characteristics, internal stresses and geometry is needed. These natural effects, if not corrected and compensated, become defects in the final product, affecting quality. 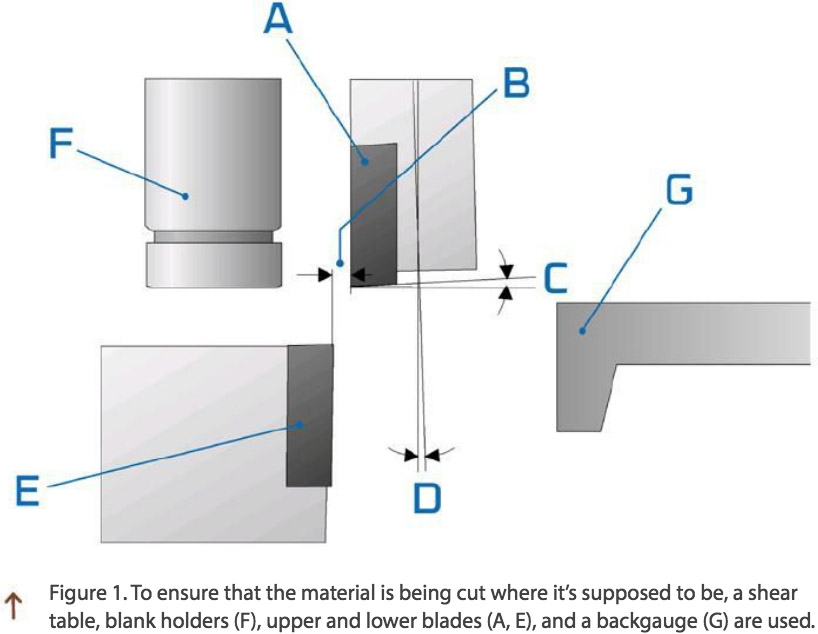 As is true with almost every fabricating process, there are recommended methods for ensuring the best end result. Shearing is no exception. When cutting with this process, it’s important to understand the multiple variables that can determine the quality of the shear. Those include cutting angle, shearing angle, blade clearance and clearing angle.

Cutting angle: As seen in Figure 1, the cutting angle (C) is the angle of the cutting edge of the blade. It slightly influences shearing force: Using two square-edge blades requires higher cutting force than if the upper blade is ground at a slight angle, usually to a maximum of 87 degrees. The lower blade is always at a 90-degree angle. 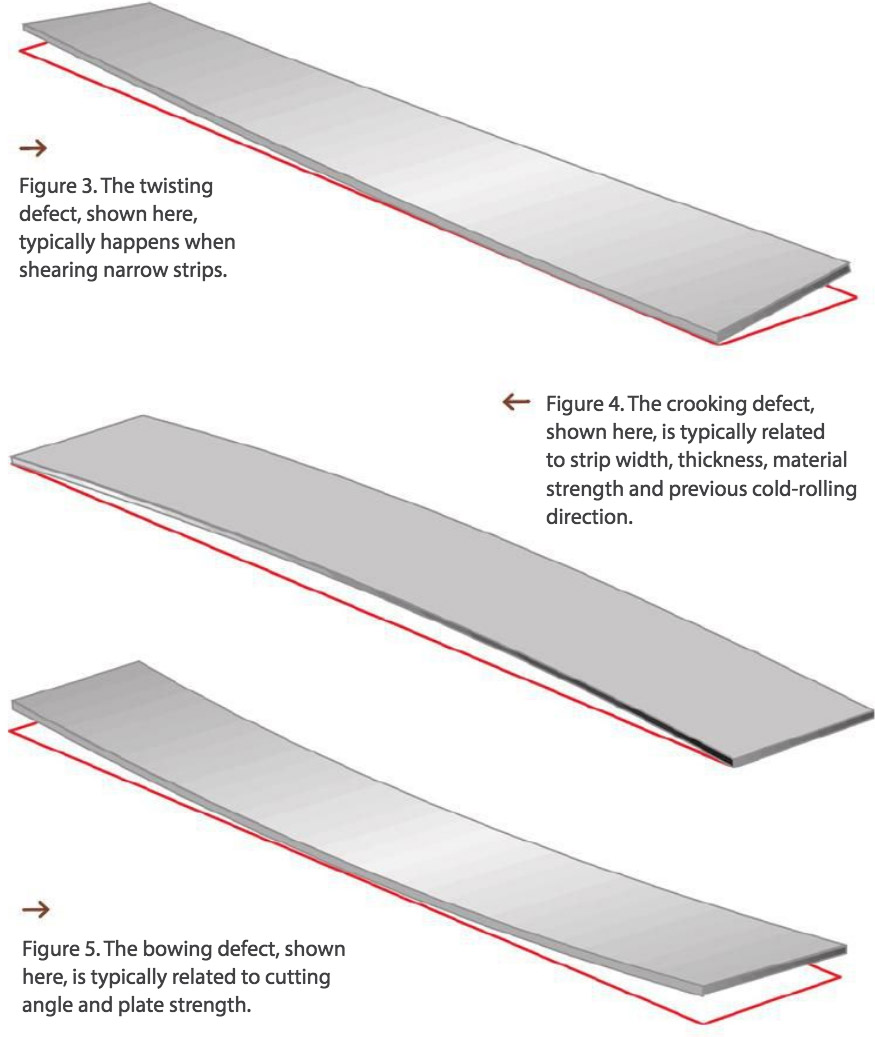 Blade clearance: As seen in Figure 1, blade clearance is the perpendicular distance (B) between the shearing blades. Exact cutting clearance depends on plate thickness and material strength. Accurate values must be determined for each case.

Clearing angle: Blade ram is not perfectly vertical, but tilted pointing toward the back to facilitate piece separation. As seen in Figure 1, the clearing angle (D) is fixed and usually set to 1.5 degrees. 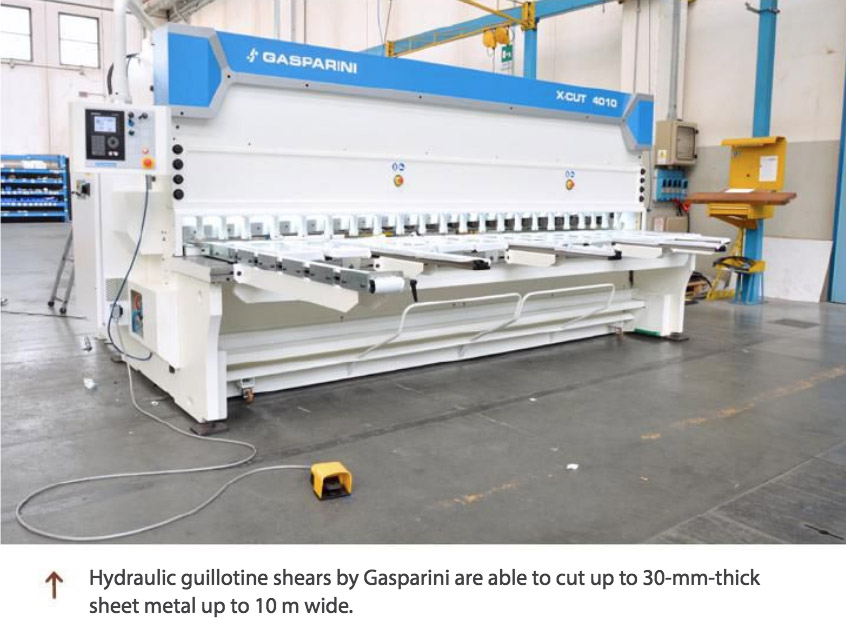 To reduce this defect, it’s recommended to lower the rake angle and blade speed. It is also useful to add an anti-twist device. This option consists of a series of hydraulic cylinders that push the plate against the top blade. The opposing force is applied during shearing, proportional to the plate thickness.

Defect 2: Crooking: As seen in Figure 4, the crooking defect produces a plate that is curved along its plane (surface stays flat). It is related to strip width, thickness, material strength and previous cold-rolling direction (residual stresses). To reduce crooking, use a smaller shearing angle and do pre-cuts along the rolling direction.

Another major cause is using a guillotine shear where the blade ram is only supported at its ends instead of over its entire length. During shearing, the blade becomes crooked because of the cutting force and tends to open in the center. To eliminate the root cause of this problem, choose a shear with adjustable blade pads that will oppose this deflection and keep the blade perfectly linear.

Defect 3: Bowing: The bowing effect, as seen in Figure 5, results in a bowed sheet. The sheet metal is no longer flat as its edges rise from the plane. This defect is related to cutting angle and plate strength. To reduce this effect, it is recommended to use a smaller shearing angle (M), seen in Figure 2, and hold the sheet metal with a back support.

Defect 4: Poor edge quality: During shearing, material initially deforms plastically, as seen in Figure 6, in a very small region (H), causing a residual deformation. Afterward, the upper blade penetrates the material forming a clean zone (I) where cutting is neat and regular. Close to the end of the shearing, the material gives in and cracks, producing a rough and irregular surface known as the fractured zone (J), which extends into the edge burr (K). The fractured zone is often not perpendicular to the plate but at a variable angle (L).

To improve edge quality, adjust the blade clearance (B) and keep blade wear under control. 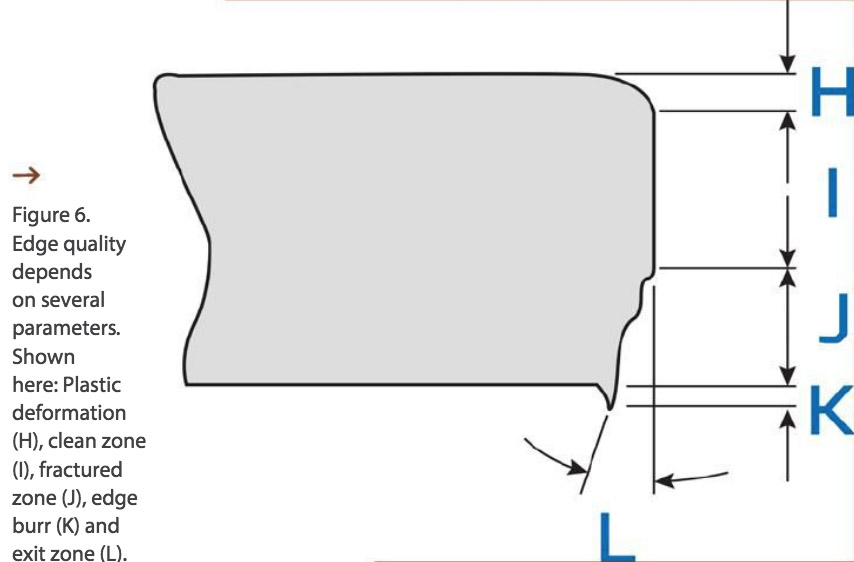 Overall, the success of each cut depends on the operator’s basic understanding of the shearing process. From process variables to the defects that can be introduced, each step along the way can affect the final outcome.