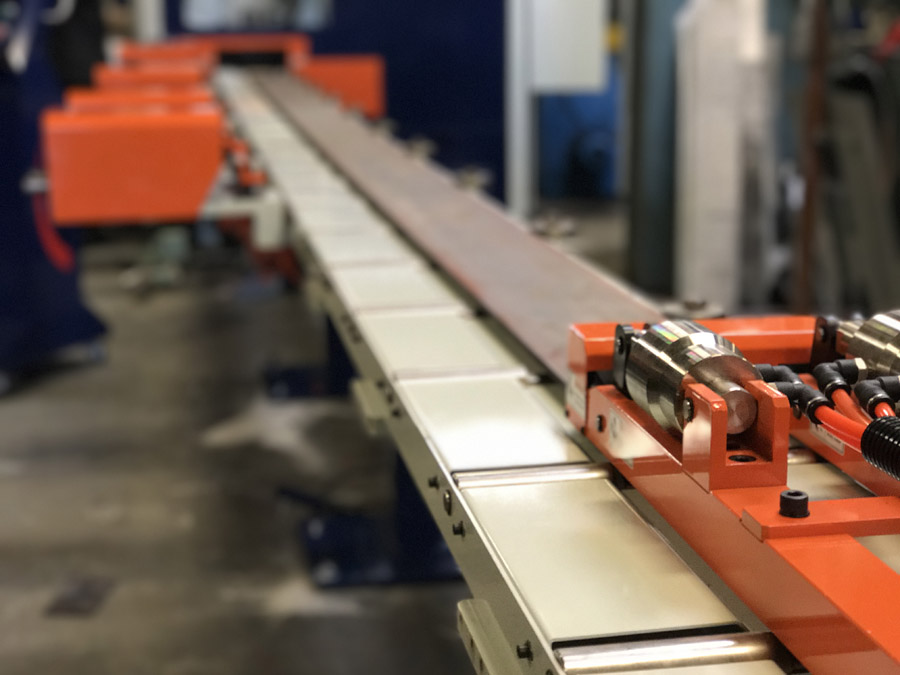 The problem: Cost-effective holemaking and shearing of thick steel plate

The solution: Invest in a CNC-controlled plate processing machine

Making large numbers of holes in long lengths of steel bar is difficult work. You might drill them on a drill press or CNC machining center, but this is both time consuming and cumbersome (and who has a machining center that big, anyway?). An ironworker might do the trick, but here again, manhandling bars up to 20 ft. long and 3/4 in. thick is no one’s idea of fun.

Adding insult to injury, many of the bars must be chopped up into shorter lengths, which means wasting valuable time bandsawing. But for one fabricating shop just a few minutes by cab from the Las Vegas strip, what was once an onerous task is now about as easy as pulling the handle on a slot machine. 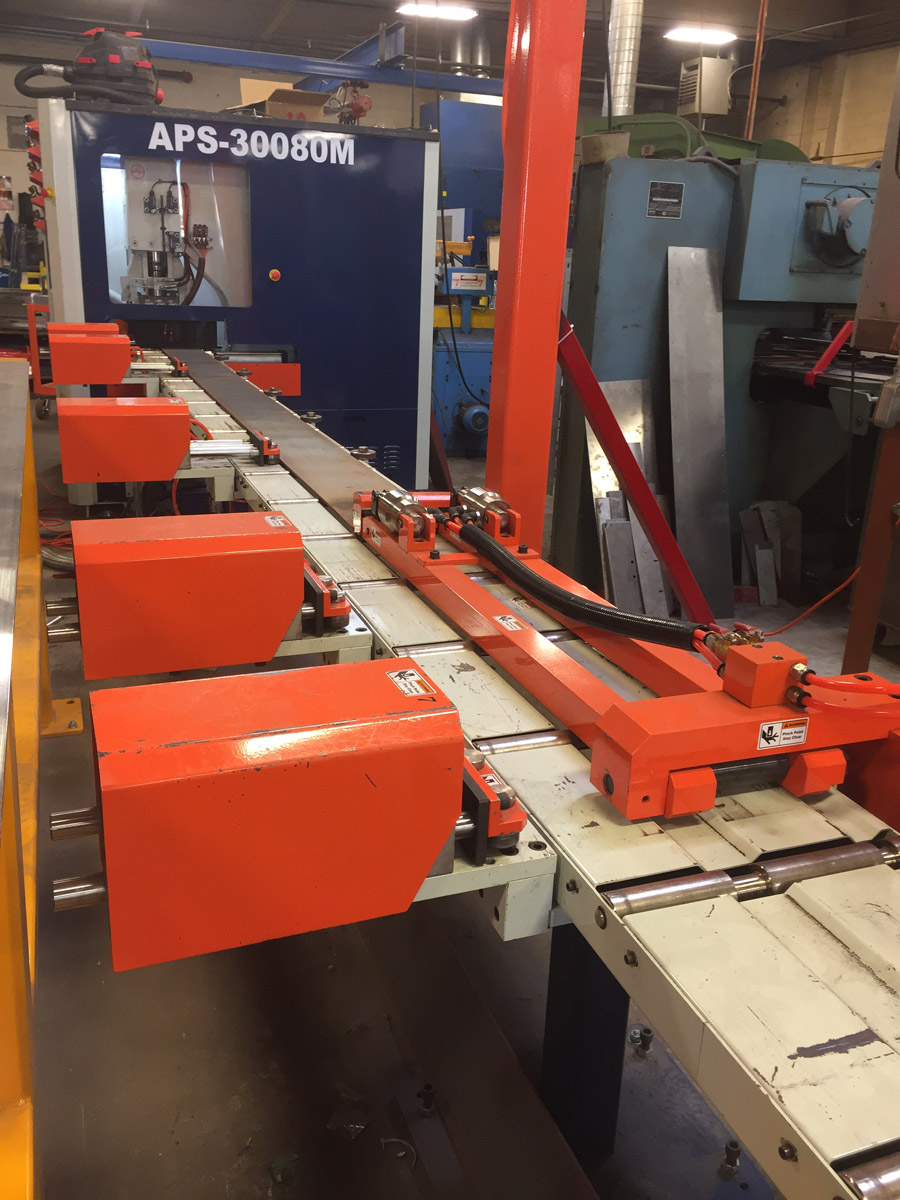 With Trilogy’s fully automated APS-30080M, the operator loads a bar onto the in-feed rollers, the machine clamps and squares it and then begins punching holes up to 1 1/2 in. dia. When done, the parts are sheared to length.

The next time you’re in Sin City, take a look at the coin carts and chip trays, the counting tables and bellman carts. Chances are, they were made not far from where you’re currently perched, drinking a cold one and plunking endless nickels into the slot machines.

In fact, if you’re visiting Caesar’s Palace or the Mirage, you might step outside into the desert sunshine and head up to Spring Mountain Rd., then walk about a mile west to Procyon Street.

It’s there that you’ll find Gianni Ygnelzi and his dad Emilio. The sign on the door says Nevada Precision Sheet Metal, but don’t bother knocking; they’ll probably be out in the shop, setting up a piece of machinery or welding up a cabinet. That’s what they’ve been doing every day since 1983, when they first went into business together.

Like many job shops, the father and son team started with a few basic machines and built the business from there. Today, they have 60 employees, a full complement of CNC equipment, and perform a variety of fabricating services, including laser cutting, shearing, welding and powder coating.

The Ygnelzis also developed their own line of locking cover systems to prevent theft of copper wire from light poles and electrical boxes (you might have noticed them while walking down the Strip). And, if you’re in need of something a little more common, such as BBQ accessories, you’ve come to the right place: The Ygnelzis make those, too.

“We also produce structural steel parts for some local companies,” says the younger Ygnelzi. “Spiral stair components, diamond plate treads, that sort of thing. We’ve done a lot of work for the taxi industry, building the signs you see mounted to most of the taxis around here. We even make sanitation boxes for the park and recreation department, for cleaning up after your dog. We’re a job shop, so pretty much anything that comes our way, from a few parts to a couple thousand, we’ll take it on.” 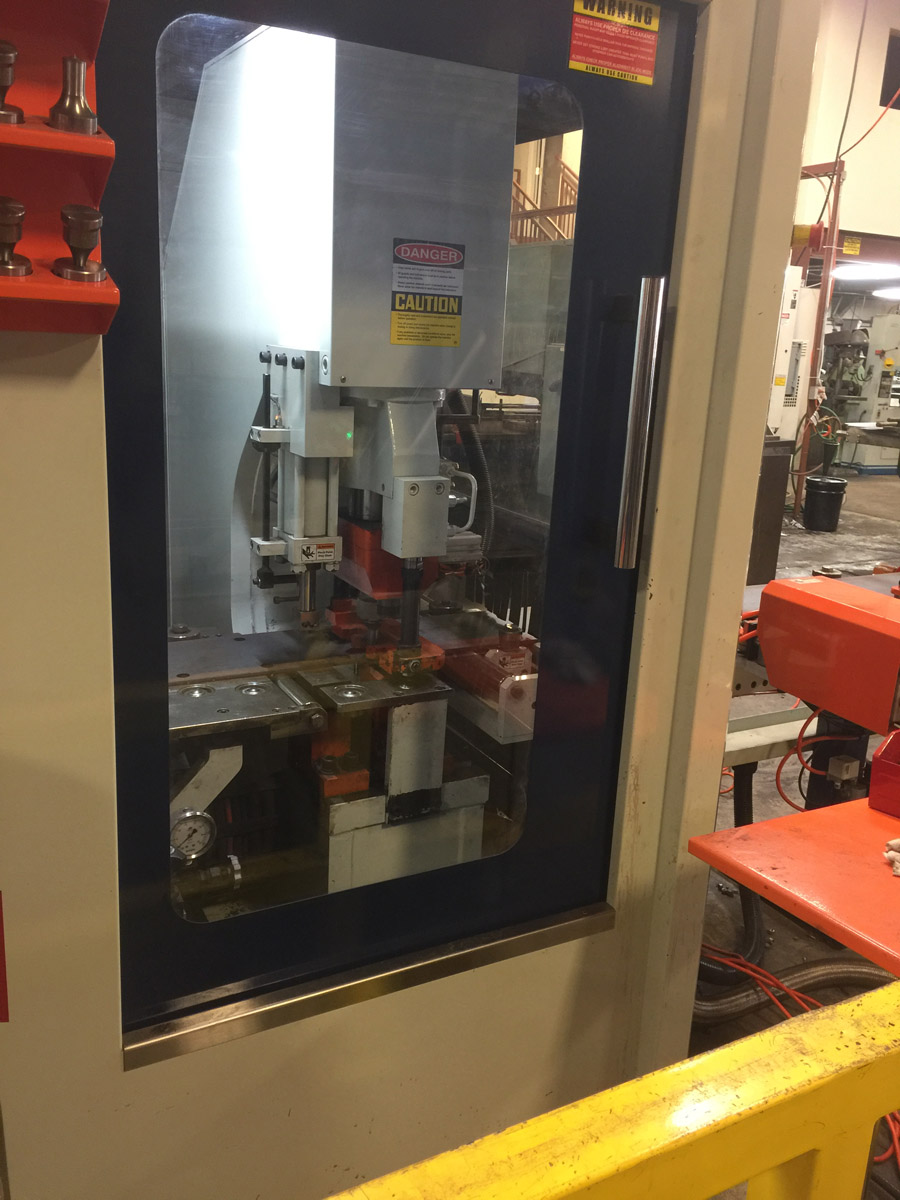 One recent job turned out to be more than the Ygnelzis bargained for. When a Las Vegas computer data center contacted Nevada Precision for some help making structural assembly components – sort of like the metal framing needed to construct an office building, but one where the occupants are servers, switches and similar IT equipment – the shop won the job.

Many of the vertical beams used in the data centers are made of 5/8-in.-thick low-carbon steel bar, 12 in. across and up to 16 ft. long. Each has a series of holes, some measuring 3/4 in. dia., used to support the horizontal cross-members and attach other sections of the infrastructure.

“Some of the parts are much smaller, down to 1/4-in.-by-5-in. plate, but all of them were taking quite a few hours to produce,” Ygnelzi says. “At that time, we were sawing the bars to length and then punching the holes on a Sunrise ironworker that we’d purchased a couple years ago from Ben Flamholz at Trilogy Machinery. The machine has a CNC backgauge, so that helped, but it was still a lot of manual work. When the volumes started to increase, I knew we had to do something different.”

Ygnelzi was happy with the performance of the Sunrise ironworker, so he checked with Trilogy yet again to see what options were available. Flamholz suggested an APS-30080M CNC plate processing system, which automatically processes flat bars up to 3/4 in. thick and lengths up to 40 ft. long.

The machine also shears the bars to length, eliminating the need for sawing. Since the machine would be on display at the 2016 Fabtech show in Las Vegas, which was just a few weeks away, Flamholz suggested they meet there so Ygnelzi could kick the tires. 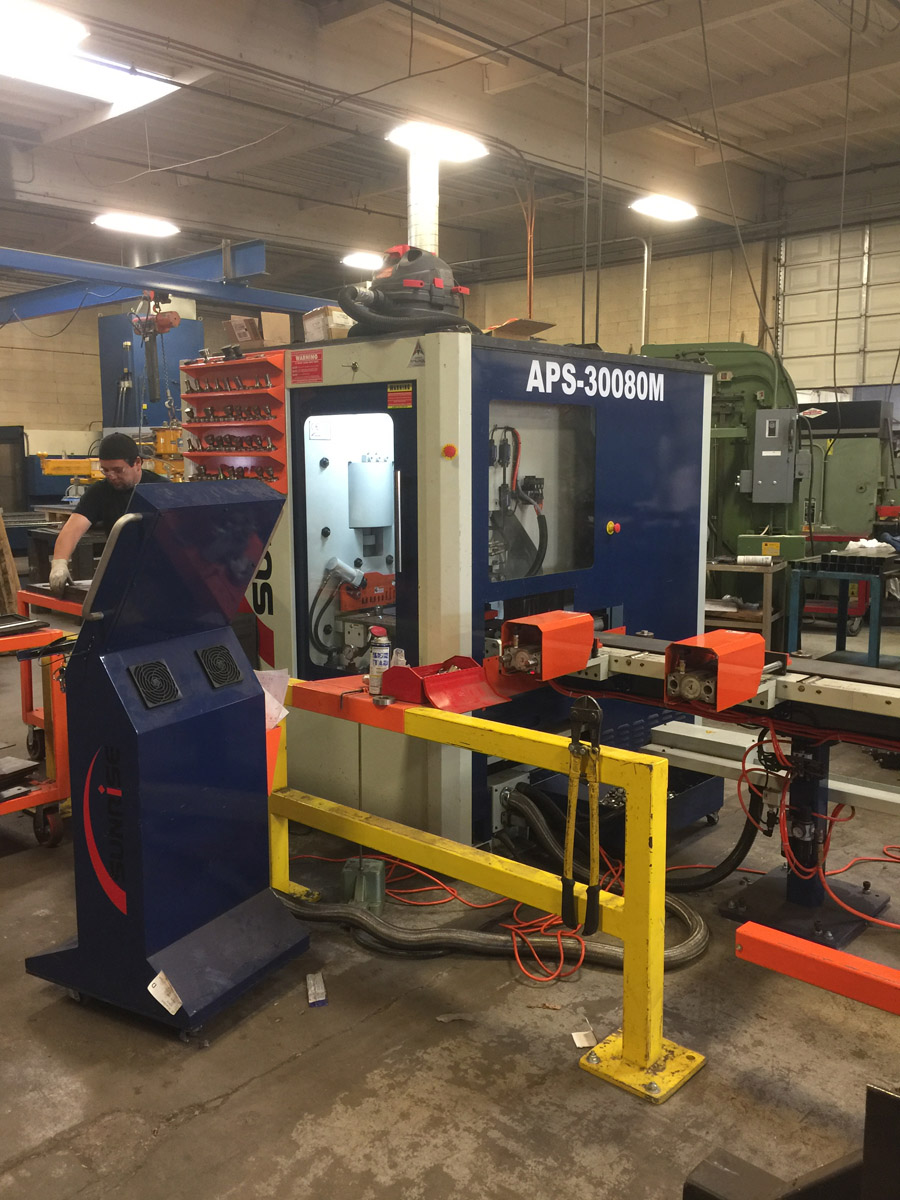 Nevada Precision’s plate processing system has reduced machining time by half, and it requires half as many people to operate as the previous semi-automated ironworker.

Gianni and his father didn’t need much convincing. They bought the demo model before Fabtech even started under the agreement that it would be sent to their shop immediately after the show.

“Trilogy came in and installed the machine, and then returned the next day to train everyone,” he says. “It only took a couple of hours. The APS is very easy to operate.” 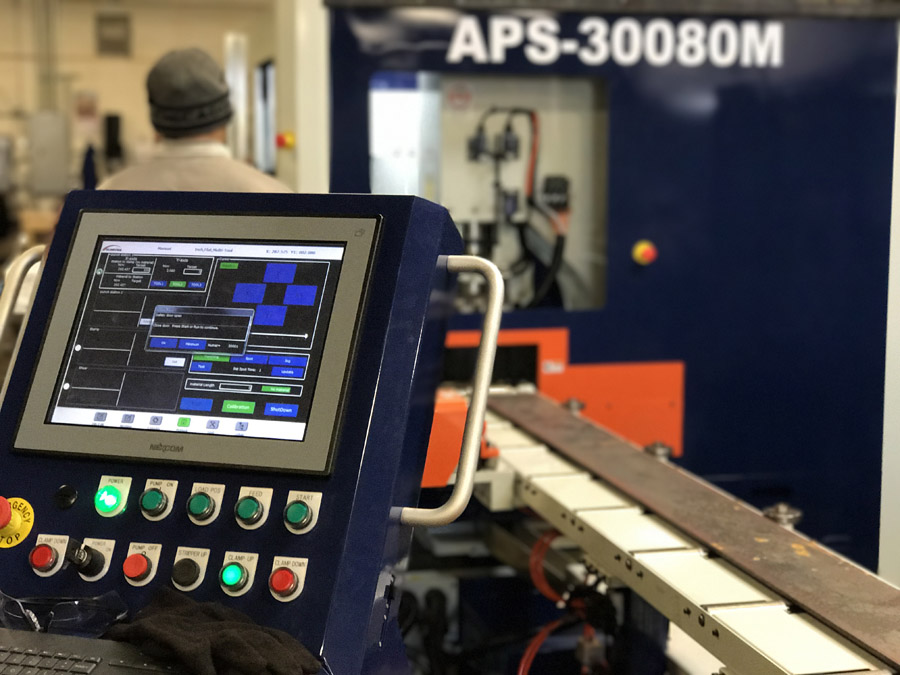 Trilogy’s APS-30080M is equipped with easy-to-use control and nesting software, designed to maximize material use.

Aside from its punching and shearing capabilities, the APS also comes with nesting software that makes it simple to lay out the different parts end to end, making the most efficient use of the material.

Tell it how many parts you need, the lengths, hole diameters and locations (up to three different hole sizes per setup is possible), and the machine takes care of the rest. All the operator has to do is set the bar on the conveyor, press cycle start and collect finished parts on the opposite end of the machine.

The APS has been in service less than six months but has already made a tremendous difference in throughput. 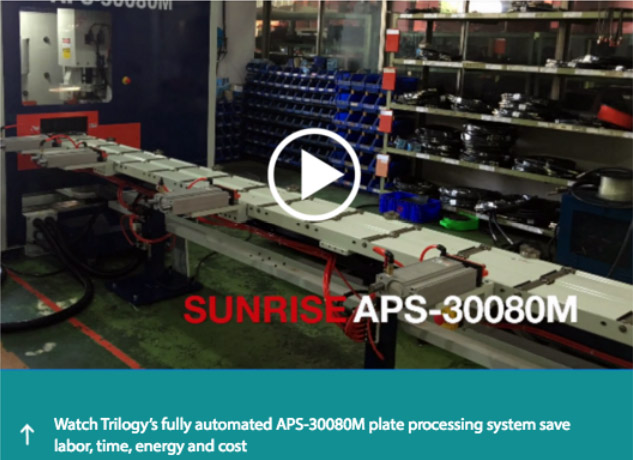 “It’s really sped up our process,” Ygnelzi says. “Before, when we received an order to prepare a room for one of these data centers, it would take us three to four weeks to punch and shear all the plates, at which point we could start welding them together. The APS reduced that to not even two weeks. It basically does the work in half the time.”

It’s also cut labor time in half. The weeks spent wrangling parts through the ironworker and bandsaw required two full-time people. With the APS plate processor, it takes only one operator to load the machine, after which the machine runs on its own.

“We’re pretty happy with our decision,” Ygnelzi concludes. “It’s been a great investment.”