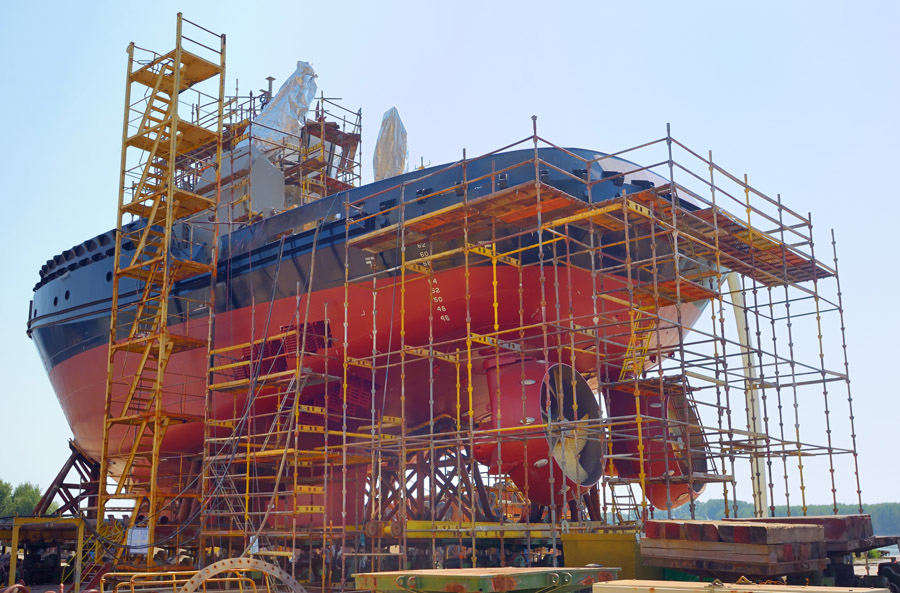 One of the largest ships ever built was so massive that one name wasn’t enough. Whether you refer to it as the Seawise Giant, the Happy Giant, the Jahre Viking or the Knock Nevis, the ultra large crude carrier clocked in as the longest and the heaviest vessel to travel the open waters. It was so big, in fact, that it couldn’t pass through the English Channel or the Panama Canal. Its last sail was in December 2009.

Even when a ship isn’t a record-breaker, shipbuilding operations are grand in scale. To manage their eventual size, naval superstructures are made of multiple large segments or blocks that are fabricated elsewhere in the shipbuilding yard and then set into place with huge cranes to eventually be welded together. Before each segment is added onto the overall ship, plumbing and electrical systems are pre-installed to minimize the effort of assembling and installing components deep inside the hull.

For the welders onsite, welds need to be perfect the first time they’re laid down. As with everything in shipbuilding, reworking welds would also be a large-scale task – in effort and time and money. To avoid unnecessary and large-scale rework, welds must be completed correctly the first time.

The best way to produce quality welds the first time is to use a documented procedure to minimize weld imperfections. These tests are performed onsite at the shipyard by designated inspectors who must give a final approval before the coating process is applied.

Most weld inspection procedures are non-destructive tests (NDT) performed on MIG, TIG and any other welding processes that are employed. The six most frequently used NDT methods are eddy-current, magnetic particle, liquid penetrant, radiographic, ultrasonic and visual testing. 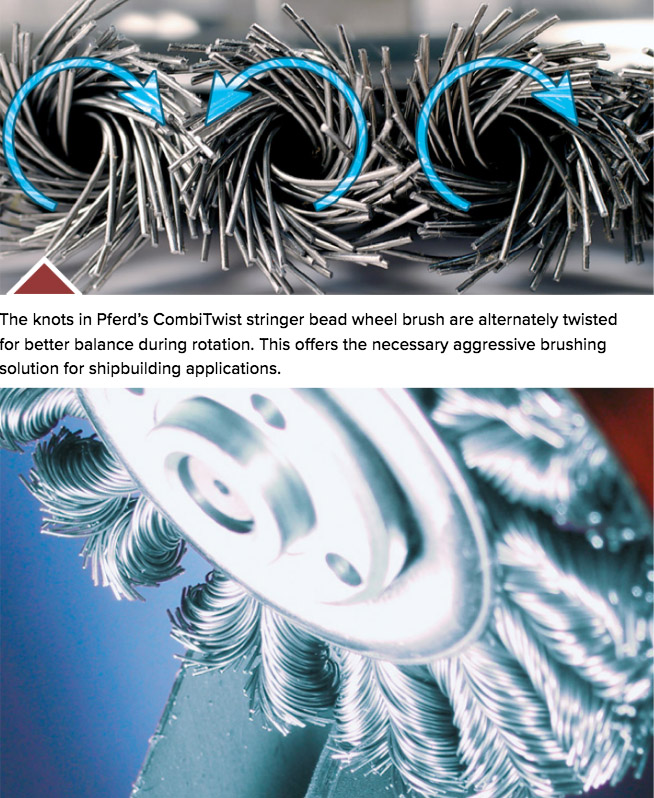 Proper preparation of the base material in the first stages and all subsequent stages of multiple-pass welding procedures lessens the chance of negative response in the final inspection stage. There are many specification parameters as noted in the recent 2016 document “Rules for Classification” by DNV-GL.

Like the ships that it sets standards for, DNV-GL is big. It’s the largest classification organization in the world, offering technical consultancy services to thousands of shipbuilders and mobile offshore units around the world.

Within its Rules for Classification document, the DNV-GL offers requirements for all aspects of a ship’s fabrication, including welding procedures and structural and tightness testing. Literally every aspect of the construction of a ship is included in the DNV-GL classification rules.

Weld prep is included in Section 5.3 titled “Assembly and Welding:”

“Fit-up shall be checked for dimensional accuracy before welding, in order to ensure compliance with the weld shapes and root openings (air gaps) according to the manufacturing documents and approved welding procedures (WPS). The root opening shall not exceed twice the specified gap as given in the approved WPS. If the permitted size of the gap is exceeded locally over a limited area, remedial work shall be carried out within the limitations specified in IACS Rec. No.47. Special attention shall be paid to the alignment of structural members where visual inspection is not possible.”

The document continues, stating that “surfaces to be welded shall be free from mill scale, slag, rust, paint or other contaminating substances.” In that regard, material preparation starts with the removal of any substance that may be found on the complete surface. Large operations of blasting or chemical blasting are common, but critical areas – those that will receive the actual joining process – often receive additional attention from  grinding with bonded or coated abrasive products.

To weld prep those critical areas, be sure the area to be welded is free of any surface contaminants or inclusions. Pferd Inc.’s CC-Grind-Solid grinding wheel, for example, achieves the level of control necessary for rough grinding operations, making it a solution for removing mill scale without undercutting the workpiece material. The CC-Grind-Solid offers an extremely high material removal rate, and coupled with a reduction in noise and vibration, it’s incredibly safe for operators to use.

After surface cleaning, smaller bulkhead raceways (the welds used for the barriers between compartments in a ship) call for a treated edge to allow for the best coating adhesion. This can be achieved by employing the Edge Cut bur, paired with the company’s PG 3/210 HV straight air grinder. 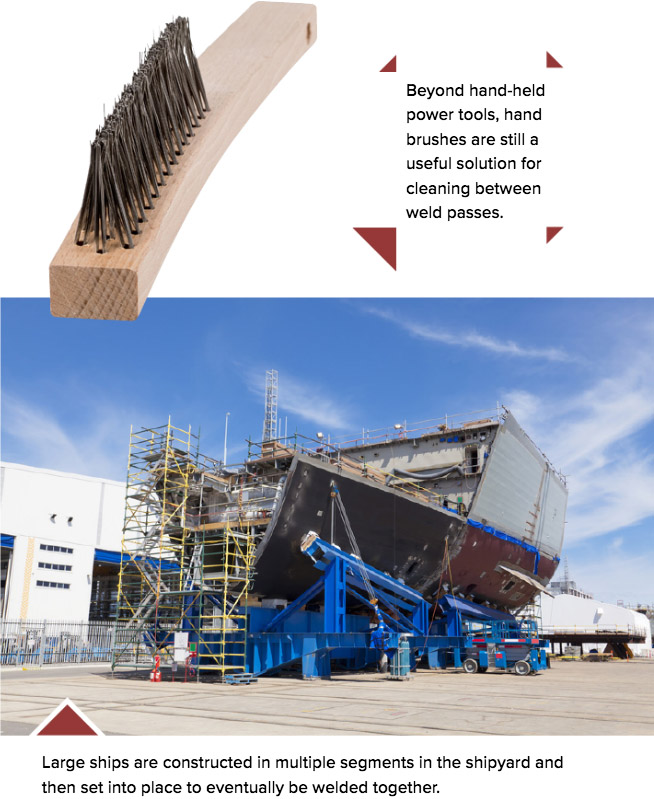 Together, the products help welders create radial edges quickly and comfortably. The bur is essentially a router bit with a built-in bearing that can create a perfect 1/8-in. radius in a single pass with a hand-held air grinder, eliminating the need for costly and heavy beveling machines.

All multi-pass welding procedures call for the use of a tight twisted stringer bead brush to clean areas and remove any possible contaminants that will cause a weld inspection failure. For many in the shipbuilding industry, the CombiTwist stringer bead wheel brush is an essential tool.

Unlike conventional stringer bead knot wheels, the CombiTwist alternates the direction of the twist with each knot. This not only results in more aggressive brushing and longer tool life, it creates a better rotational balance, reducing vibration and discomfort to the operator.

Pferd’s V-Groove scratch brush is similar to a standard curved handle scratch brush except that the wire rows are set at an angle to create a very narrow face width. This is for hand brushing in tight grooves and spaces without affecting the surrounding surfaces of the workpiece.

Like the DNV-GL, the International Association of Classification Societies (IACS), an organization focused on maritime safety, lays out guidelines for weld prep and NDT in shipbuilding operations. In the IACS’s report titled “Non-destructive testing of ship hull steel welds,” guidance is provided on the methods and quality levels that should be employed for the NDT of ship hull steel welds.

In regard to surface conditions, “zones to be examined should be free from scale, loose rust, weld spatter, oil, grease, dirt or paint that might affect the sensitivity of the testing method.” When the surface to be inspected meets those requirements, the IACS says, “the extent of testing should be planned by the shipbuilder according to the ship design, ship type and welding processes used. Particular attention should be paid to highly stressed areas.” 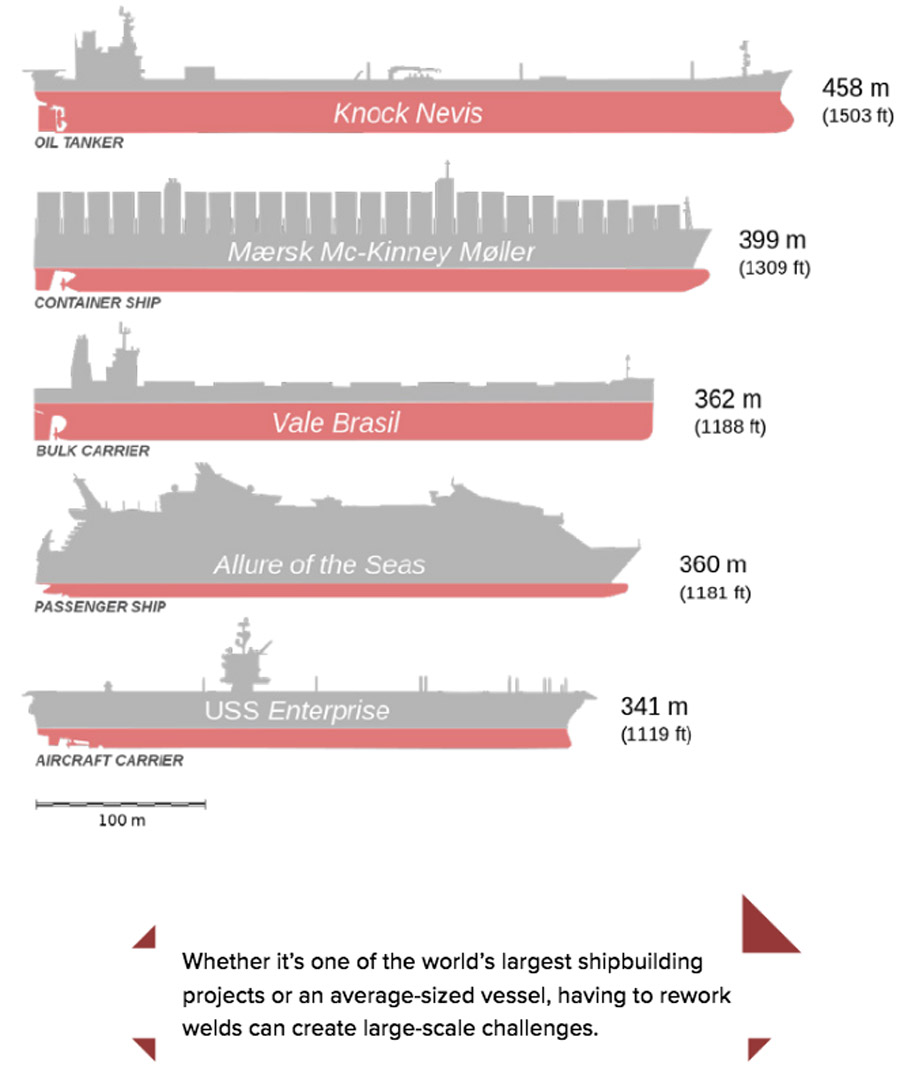 Furthermore, the IACS suggests that shipbuilders submit a specific plan to the classification society for approval. The plan should “include the areas to be examined and the extent of testing with reference to the NDT procedures to be used.” The report continues, saying that “the identification system should identify the exact locations of the lengths of weld examined.”

In regard to the inspection process, the IACS suggests that welds should be subject to visual testing. It also provides specifics regarding magnetic particle testing, liquid penetrant testing, ultrasonic testing and radiographic testing. Those specifics can be found in the online report.

Clearly, great care is taken in shipbuilding operations before, during and after the welding process. The reason for this high attention to detail is to eliminate the possibility for imperfections that could slip through the cracks. If an issue is discovered during the final NDT phase, it can cause significant casts for rework – costing a shipbuilder precious time and money.