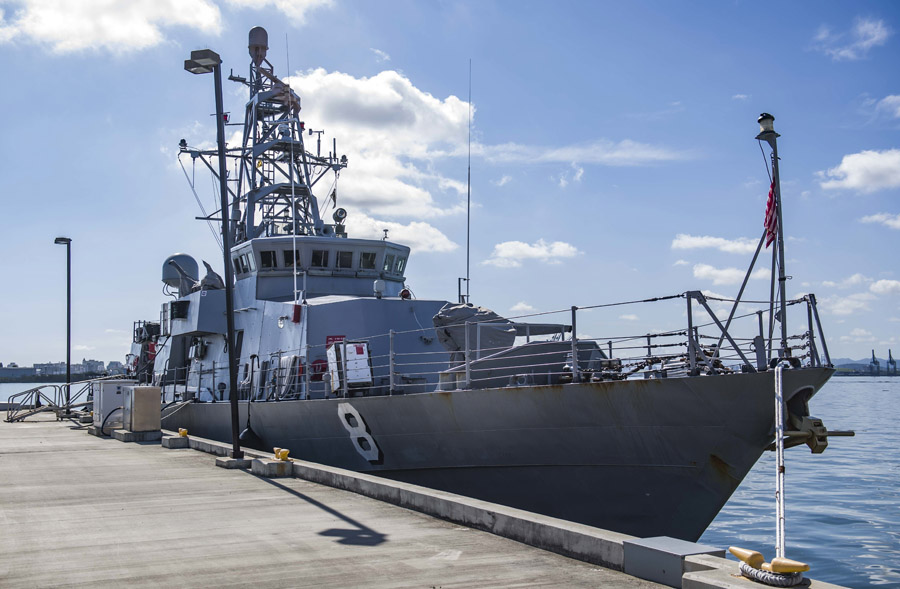 Since 1946, Bollinger Shipyards has been in the business of building marine craft, providing services to government, commercial and energy markets throughout the Gulf of Mexico region. Building ships at Bollinger is a metals-intensive process, requiring a number of fabrication tools, including waterjet and plasma cutting technology. Bollinger is able to meet client expectations by using the best equipment.

Bollinger is the largest employer in Lockport, La., one of 10 Bollinger locations in the state. As a family owned and operated company specializing in repair, conversion and new construction, the company’s workforce builds offshore and inland vessels for several service companies.

Bollinger has government contracts, mostly working with the U.S. Coast Guard. For the past three decades, the shipbuilder has developed high-performance Coast Guard and U.S. Navy patrol vessels. In fact, Bollinger employs several in-house naval architects and marine engineers in charge of innovative international designs to meet strict government requirements. It has delivered nearly 140 patrol boats since 1985. The boats range in size from 87 ft. to 179 ft.

Tools of the shipping trade

To minimize waste, Bollinger utilizes ShipConstructor, a 3-D modeling tool used in shipbuilding, to keep the amount of scrap to a minimum. It also relies on various cutting applications to complete projects with efficiency and speed to consistently deliver on schedule. Cut quality is also important, as ships require precise and clean cuts.

The boat hulls are made with AH35 and A36 mild steel for strength while the superstructure is fabricated out of lighter weight 5086 and 5456 aluminum.

Dennis Fanguy, Bollinger’s vice president of quality management systems, says the HyPerformance plasma system offers high throughput, cut quality and marking. Before investing in the HyPerformance, Bollinger’s previous plasma product had not been producing satisfactory cuts, requiring time-consuming secondary operations. Now, however, parts are ready to use straight off the table. Rework and grinding have been eliminated.

“The speed of cutting process and throughput are very important to us,” Fanguy says. “The HyPerformance plasma system is a workhorse. Parts come off the cutting bed ready to use and marked with part numbers.” 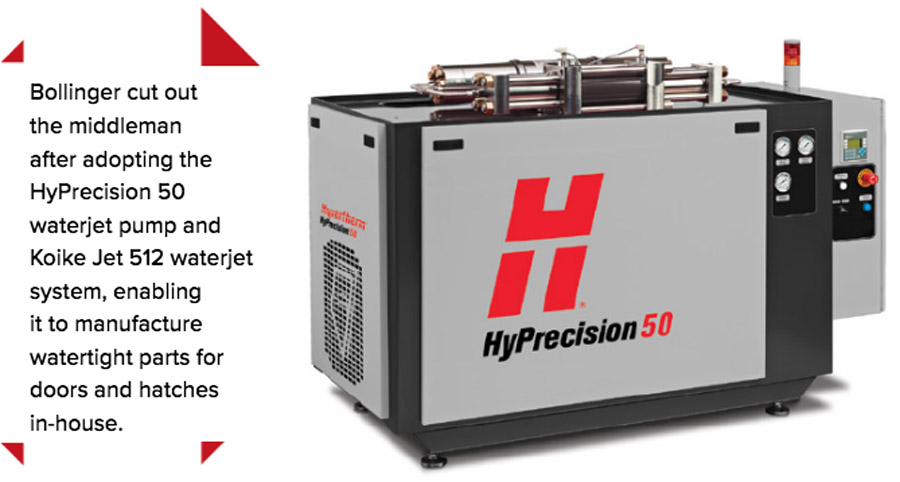 To prevent water from coming inside the ships, precision is a requirement – especially on doors and hatches. In the past, Bollinger outsourced prefabricated watertight doors and hatches, but the cost of purchasing from a third party pushed it to find a better solution. Outsourcing the work to a local fabricator didn’t solve the problem, however, because the plasma equipment the fabricator used was not producing quality cuts on the small parts that go into the doors and hatches. Furthermore, there was too much waste in both time and materials.

“Waterjet is precise,” Fanguy says. “Parts don’t have heat-affected areas and the machine setup is quick. We can cut a variety of materials, like metal, plastics and rubber.”

Danny Richardel, Bollinger’s vice president of new construction production, says it took about a day to figure out the return on investment with the waterjet system, which revealed that it would take less than two years to see a return.

“Going outside the organization was slowing us down,” he says. “Our projects would get bumped, so they took longer. Having the waterjet system in-house gave us the control we needed.”

Producing a boat from raw materials to a sleek, floating and fast-moving marine vehicle takes careful team coordination, and that begins with the engineers at Bollinger. They work closely with the customer, discovering exactly what it is they want, and what modifications need to be made.

To make the ship come to life, Bollinger employs mechanical, electrical and weld engineers. Furthermore, it has a full squad of fabricators, carpenters, accountants, material managers, project managements and welders who work five-day weeks, up to two shifts a day. To get a job completed on time, painters sometimes work through the weekends.

The Hypertherm equipment is part of what keeps Bollinger from experiencing too many production disruptions, the smallest of which can balloon a budget and cause a missed delivery date.

The largest boat Bollinger manufactures for the Navy is the 179-ft. Cyclone Class patrol coastal ship. Originally designed to government specifications for a 170-ft. vessel, Bollinger added a stern notch launch and recovery system for the Navy’s 11-m RHIB, or rigid-hulled inflatable boat. Cruising at speeds up to 35 knots, the boat is able to stay out on the water and on patrol for 10 days before it needs to be refueled.

The largest ship built by Bollinger for the Coast Guard is the USCG 154 Sentinel Class fast response cutter patrol boat. It measures 154 ft. by 25 ft. by 8.4 ft., and is powered by two Tier II diesel engines rated at 5,760 brake horsepower. The boat accommodates a crew of 24 for up to five days at sea. It is used for search and rescue, drug and illegal migrant interdiction, and homeland security and maritime defense.

Another boat made by Bollinger – found all over the continental United States and in Alaska and Hawaii – is the USCG 87-ft. Marine Protector Class patrol boat. It’s designed for similar uses as the larger Sentinel Class ship, but is also used for fishery patrols up to 200 miles off shore. Bollinger has delivered 73 of these ships to inland and coastal ports.

Not only is Bollinger filling a role as an employer in several areas of coastal Louisiana, the company is also involved with development programs that assist in easing the skills gap affecting the manufacturing industry. As an example, Bollinger partners with local schools, city and parish governments to develop students for trade-related careers, such as those in welding and electrical. Bollinger has also developed high school training and apprenticeship programs.

The company is also active in the National Shipbuilding Research Program (NSRP) and is a partner in the NSRP’s mission to “manage and focus national shipbuilding and ship repair research and development funding on technologies and processes that will reduce the total ownership cost of ships for the U.S. Navy, other national security customers and the commercial sector.”