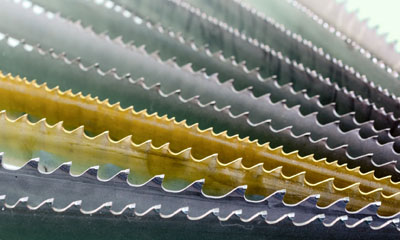 Preventable injuries are something manufacturers are regularly fined for by OSHA when the worst happens and a blade makes contact with an operator or debris hits anyone standing in a machine’s proximity. Because the sawing operation involves displacing material, there are always going to be chips to deal with, which is why flying debris is one of the most common causes of injuries in sawing.

Manufacturers have a duty to protect their operators and auxiliary employees, which is where safety protection systems come in to play.

Many saws, including large bandsaws used for processing metal, are built with optional safety devices that keep unintentional contact with the blade to a minimum, but as Phil Reuter, machine safeguarding specialist and regional sales manager with Rockford Systems LLC, says, “sawing is inherently dangerous.”

“There is always a requirement for at least a portion of the cutting surface to be exposed no matter the size or type of saw,” he says. “Manual saws require the operator’s physical interaction with parts and moving blades.”

“Complacency can also lead to injury due to a lack of attention to the hazards.”
Phil Reuter, machine safeguarding specialist and regional sales manager, Rockford Systems LLC

The injuries sawing operators face include hand and forearm injuries from guiding pieces into the saw, lacerations or bruising from flying chips and debris, and injuries from moving large pieces of material to and from the saw.

Also, should a large piece that’s being cut fall over, it can create a dangerous “pinch point” that can injure the operator and possibly anyone in proximity to the material. Broken saw blades also pose a risk to operators working on machines that aren’t equipped with the right safety equipment.

“Those are the things you look at when designing safeguarding for saws,” Reuter explains.

Handheld sawing equipment presents higher risk of unintentional contact with the blade, but larger industrial sawing equipment also has its own set of risks, especially when a lack of concentration enters into the equation.

“Typically, you would want something like a push stick or some other means for keeping the hand away from the blade,” he explains of operators feeding material to the blade, “but complacency can also lead to injury due to a lack of attention to the hazards, even to the most experienced operator.”

Conversely, injuries can arise if the process the sawing operator is used to is altered. For instance, if an operator is faced with a different application or a new material, his inexperience
in the situation can lead to injury. Reuter recently worked with a company where the operator who was accustomed to one type of cutting process began working with a different material when an injury occurred.

“He was used to a pneumatic clamp for holding the material in place,” Reuter says. “The operator was not paying attention as he was advancing the material and the machine clamped and took off the tip of his thumb.”

Therefore, comprehensive training and education on the hazards of the saw are a key component to preventing injuries.

“As well as situational awareness – don’t become complacent with the machine you’re on every day,” he says. “Always maintain the awareness that it is a dangerous machine and can cause you great harm if you’re not paying attention.”

Reuter says that he notices hesitancy on the part of manufacturers in providing the necessary safeguarding on saws. Part of the reason for that reticence is related to productivity – they’re afraid the safety gear will get in the way of the efficient steps an operator takes to get the material in place, cut it and offload it.

But Reuter believes the most important aspect of protecting operators is performing a thorough safeguarding assessment of the saw by a qualified safety professional, whether it’s an inside person or a third party, such as Rockford Systems.

“I can safeguard a chop saw to be completely enclosed,” Reuter says of light-duty environments, “because it’s an automated process. But another plant might use the same saw completely differently. It really comes down to individual use and application. Realistically, when we retrofit these things, there potentially is a short period of loss of productivity, but eventually it becomes second nature as if they’ve been running it with that safeguard all along.”

Carrie Halle, vice president of marketing for Rockford Systems, says a short-term loss for long-term gain makes perfect sense, especially considering that an injury or fatality has many repercussions that could have been prevented with the proper guarding products.

“If your organization doesn’t spend the time safeguarding up front,” Halle begins, “then your risk for an injury is much greater and that’s where the loss of productivity really happens. Somebody gets hurt, the line goes down, the person goes to the hospital, OSHA comes in and issues citations and fines, temporary workers are hired and trained, worker’s comp and lawsuits ensue.

“There is just this whole snowball effect of costs and disruptions to productivity that happen when an injury occurs,” she continues. “Not only is safeguarding the law, it’s also a social responsibility and makes good business sense.”

Many companies make the mistake of thinking that their new equipment comes fully safeguarded right out of the box. While new equipment may include some safeguarding, whether or not those guarding products are in compliance with OSHA CFR 1910, ANSI B11 and NFPA 79 is questionable and should be evaluated before the saw is put into operation.

Sawing is becoming much more automated, which includes material handling and, in some cases, completely enclosed sawing tables that almost fully eliminate contact between the operator and the material.

Reuter says the benefit of automation is that manufacturers can do a better job of protecting the operator and people in the proximity of the saw with such things as barrier guides, which can’t be used in a situation where an operator is manually loading and offloading material, but can be used for added protection in an automated scenario.

Reuter recently completed an assessment for a manufacturer’s three automated vertical bandsaws. He designed a system with side and rear guarding to protect operators and other personnel walking in the area while the machine runs.

He also included a light curtain at the point of operation, which senses the presence of a person and shuts down the saw if the light curtain barrier is broken, which is important when the operator has contact with the saw during setup and adjustment periods.

“What costs a few thousand dollars up front can save many hundreds of thousands of dollars due to lack of injuries,” he says. “Safeguarding has a positive return on the investment. 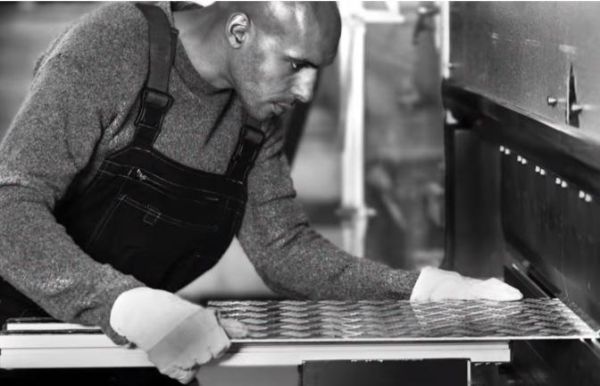 Watch the video to learn more about Rockford Systems and how the company helps its customers keep their machine operators safe at work.

In regard to ROI, Halle recommends OSHA’s Safety Pays website, which includes information on the topic. Safety Pays is a program that helps employers assess the impact of occupational injuries on their profits. The intent is not to offer a detailed analysis of injury costs, but more to show the impact an injury can have on a company.

For example, if a company has annual sales of $5 million with a pre-tax profit margin of 8 percent, and an employee has a hand injury while operating a machine, using insurance claims data, the Safety Pays site calculates that the injury would have a direct cost of $56,557 and indirect cost of $62,212 for a total cost of more than $118,000.

Halle notes that Rockford Systems, which also assists other safety equipment manufacturers in distributing their products, is usually guided in its safety product designs by unmet needs in the marketplace.

“We assess safety needs, identify gaps in our line and fill them,” she says. “We also do a lot of build to spec. We go in, do a machine safeguarding or risk assessment, see how operators work with the machines and how their process fits into the whole production line, and then we develop customized safeguarding solutions that decrease risk and improve productivity. Every guarding situation is different.”