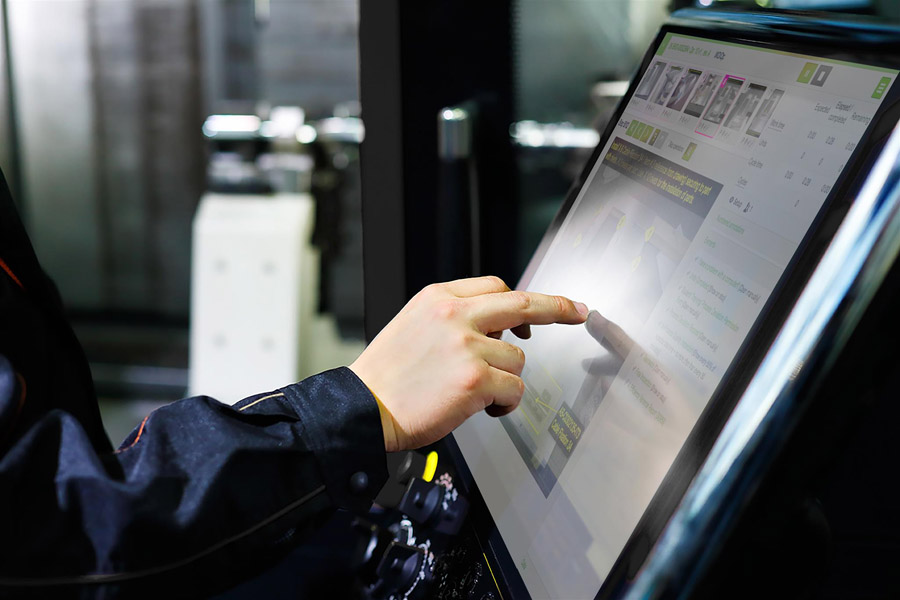 Imagine having to stuff a thick pile of drawings, inspection sheets and process plans into a plastic binder, walk it down to the production floor and then find whatever operator has been tasked with making the parts documented in that work packet. When done, the papers must be rounded up from the shipping area and filed in one of the many engineering or inspection room file cabinets so that whatever production notes and quality information was captured during the job can be stored for all eternity.

Then imagine that when the customer calls with a last-minute revision change five minutes before the job is scheduled to start, all that paperwork must be redone. It sounds like a huge hassle, yet it’s an accepted way of doing business, taking place many times each day across thousands of shops. The result is lost time, potential quality issues and waste. 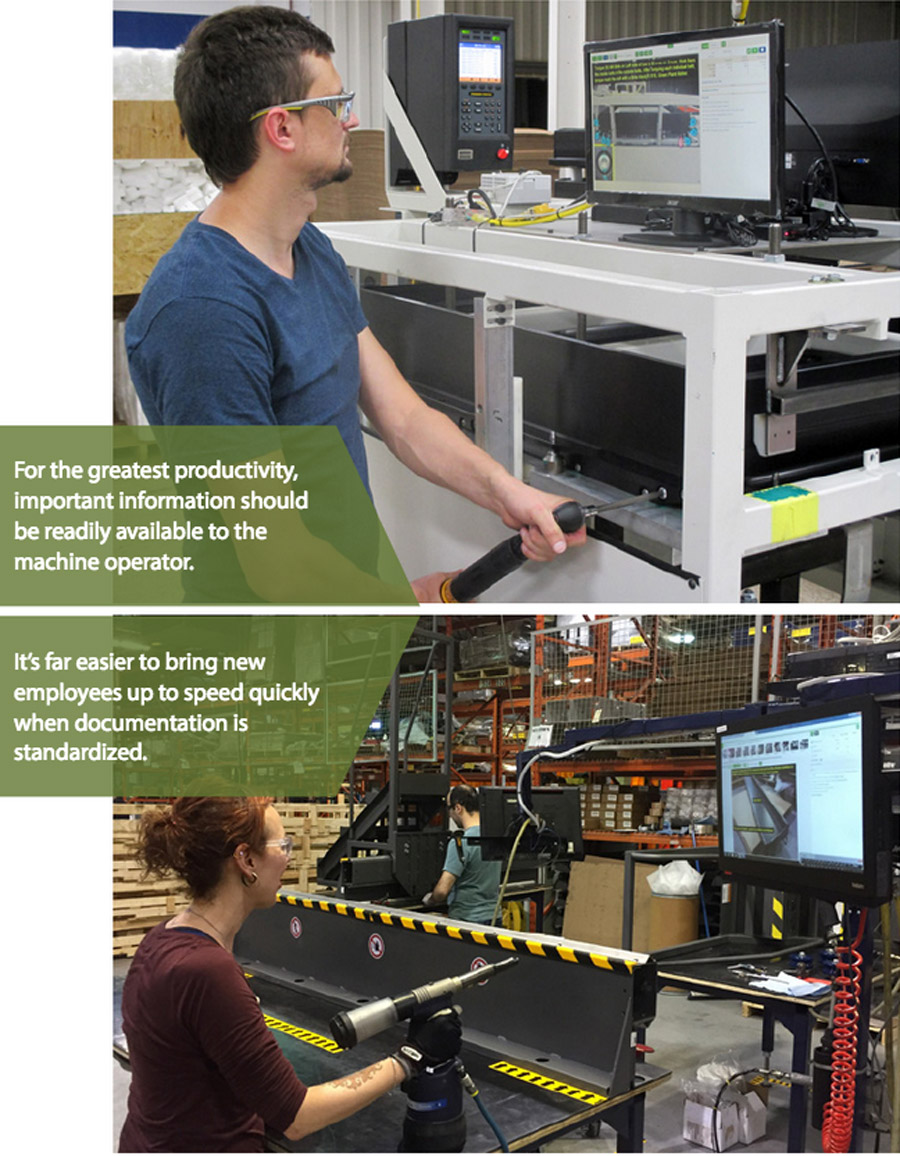 Steve Zimmermann once felt this pain. The president of Quebec-based CMP Advanced Mechanical Solutions LLC, Zimmermann took over the reins of his father’s business during the early 1980s. He’s since transformed the company into a leading supplier of fabricated products and assemblies, including industrial enclosures, capital equipment, medical devices, and light rail and transportation systems.

Beyond work instructions: In this example, the documentation software is also used to train new employees.

“CMP has thousands of products with multiple operations each, and some bills of material often contain hundreds of parts,” says son Ryan Zimmermann, who once worked at CMP and is now director of business development at sister company Visual Knowledge Share Ltd. (VKS). “Like many contract manufacturers, CMP offers a variety of services, such as laser cutting, bending, welding and assembly as well as machining and finishing work. With that level of complexity and the fact that many of their customers require complete traceability, how on earth are they supposed to keep track of it all with paper-based documentation?”

By identifying the sequence in which products should be assembled or a machine should be set up, mistakes are reduced and quality improved.

Zimmermann and a team of talented developers set out to solve this paper problem. Over the course of three years, the team developed and deployed a software system for electronically managing work instructions and collecting shop floor data. CMP then installed a wireless network with computers at each of the shop’s hundred or so CNC and manual workstations. Work instructions were made digital, as were inspection forms, part drawings, setup and tooling sheets, and every other piece of paper needed on the production floor.

The result was a 20 percent increase in productivity and a substantial improvement in product quality. These benefits, though substantial, don’t include the elimination of the paper-chase scenario as well as the tractor trailer’s worth of file cabinets. 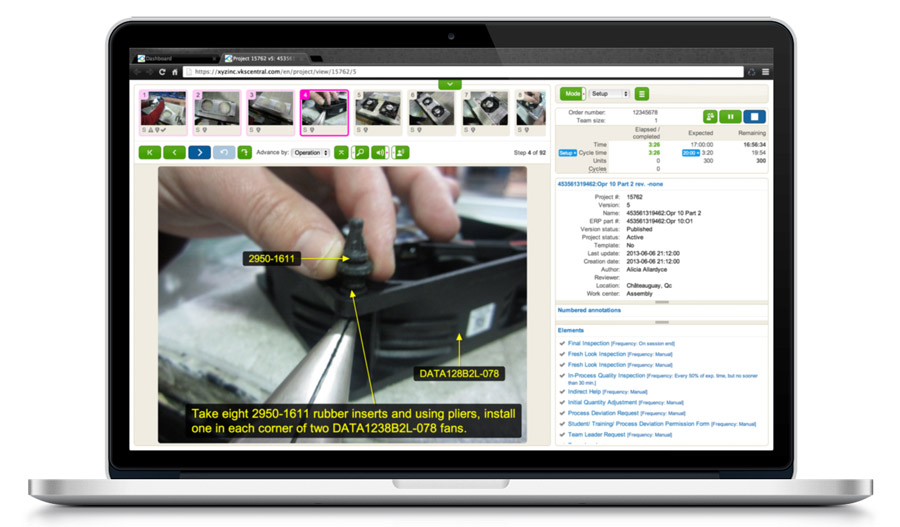 A good electronic documentation system can be deployed on PCs, laptops and mobile devices.

“It was a little surprising, but the primary driver behind the improvement came from standardization of our processes,” says Jonathan Ayotte, VKS administrator at CMP. “Very often in a manufacturing company, you have this tribal knowledge. There’s one person who remembers how to set up the job or figures out a better way to assemble something, and the best way to capture that is to document the process in a consistent manner, taking pictures and video of what was done and then have everyone follow a now standardized process flow. Doing so has a massive impact and is where CMP saw most of its gain.” 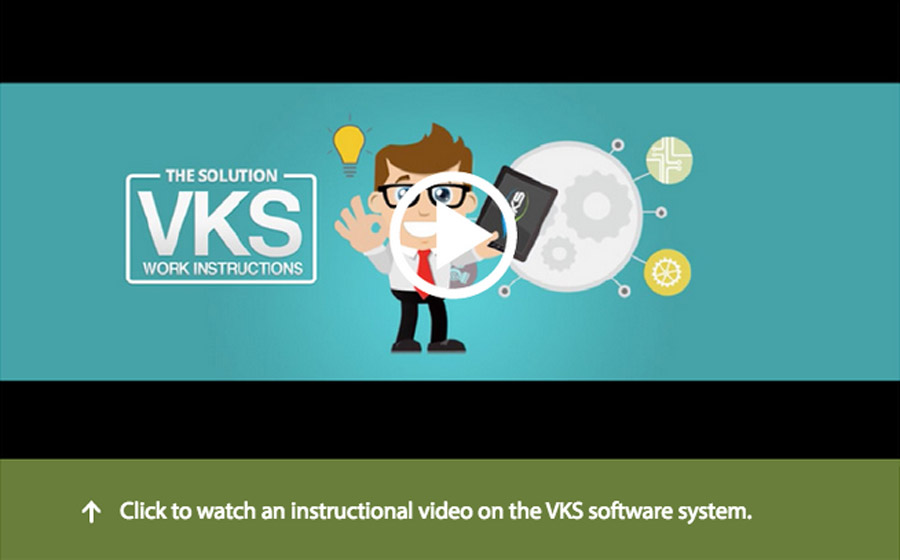 The results were so impressive that the senior Zimmermann decided to market the software system. To do so, he created VKS, a company that continues to develop the software and today has more than 100 customers worldwide, ranging from sheet metal fabricators and machine shops to electronics manufacturers and autonomous robot providers.

One of these is drive train solutions provider Team Industries. With 1,150 employees and seven locations throughout North America, Team Industries is a vertically integrated manufacturer that designs and assembles a range of OEM transmissions, transaxles, differentials and drivetrains, including those used in electric vehicles and four-wheel drive systems.

Mark Schermerhorn, lean coordinator at Team Industries’ Audubon, Minn., facility, says the company learned of VKS while attending the 2014 IMTS show, and he and his coworkers decided to take advantage of the software vendor’s no-strings trial period.

“Our location had already transitioned to an in-house electronic documentation system, but there’d been talk about improving our work instructions,” he says. “With our old system, we had a lot of Word documents and Excel sheets that we’d converted into PDFs, and we’d already placed PCs at most of the machines and assembly stations. But we wanted something more robust. Because VKS is web-based, all we had to do was upload some sample documents and provide the existing workstations with an internet connection. VKS made it pretty easy to try it out and see if it would be a good fit.”

As things turned out, it was, and Team Industries has since implemented the VKS software companywide. Although Schermerhorn and his team continue to build on the system, he says the binders with laminated quality documents, blueprints and checklists – the “hundreds and hundreds of job books everywhere” – have gone the way of paper tape and hand-scribed bend layouts.

Yet the VKS implementation was not simply a matter of reinventing the Team Industries wheel. The existing PDF files were uploaded to a cloud-based server (one of the storage options for VKS customers) for easy access from any of the facilities, but were augmented with videos, annotations and hyperlinks. Revision control has been greatly simplified, the amount of legwork needed to roll out a new or existing job reduced, and VKS is even being used for unplanned tasks such as 5S organization and orientation training. 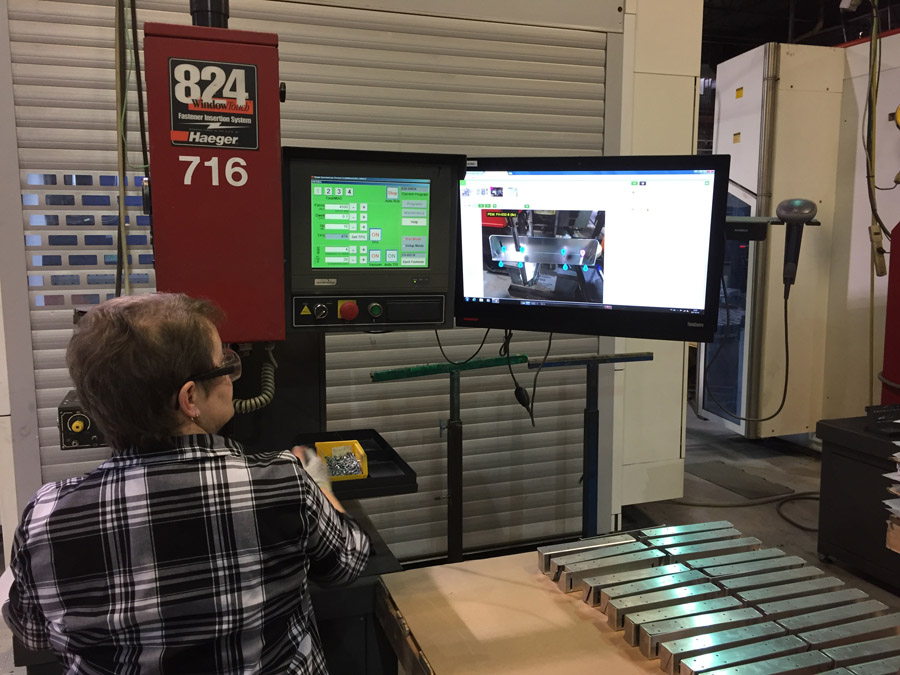 Whether assembling components or inserting hardware, the VKS software system can walk the operator through each step of the process.

Says Schermerhorn, “It was definitely the right move for us. We’re able to put together far more detailed work instructions, something that’s especially helpful when training new employees. And much of the undocumented knowledge that the more experienced people carry around in their heads has since been brought into the system. This not only makes things easier for everyone but it reduces risk to the company if one of those people move on or retire.”

Scott Electronics Inc. thinks so, as well. A high-mix, low-volume contract manufacturer supplying control boxes and electromechanical assemblies to industries such as medical and semiconductor, Scott Electronics has been in business since 1986 and has been a VKS user for the past two years. The company compares the transition to throwing out paper roadmaps for a GPS system. No longer is it left to the user to decide which road to take; instead, the system guides them through the shortest, most efficient and cost-effective route.

“In the past when you wanted to drive somewhere, you had to pull out this big clunky map,” says operations manager Jason Caverly. “You didn’t know if it was outdated. It was hard to read and you couldn’t use it easily while driving. Then the GPS system became available, and it guaranteed information in real time that was always up to date and easy to understand. That’s what VKS does for us.”