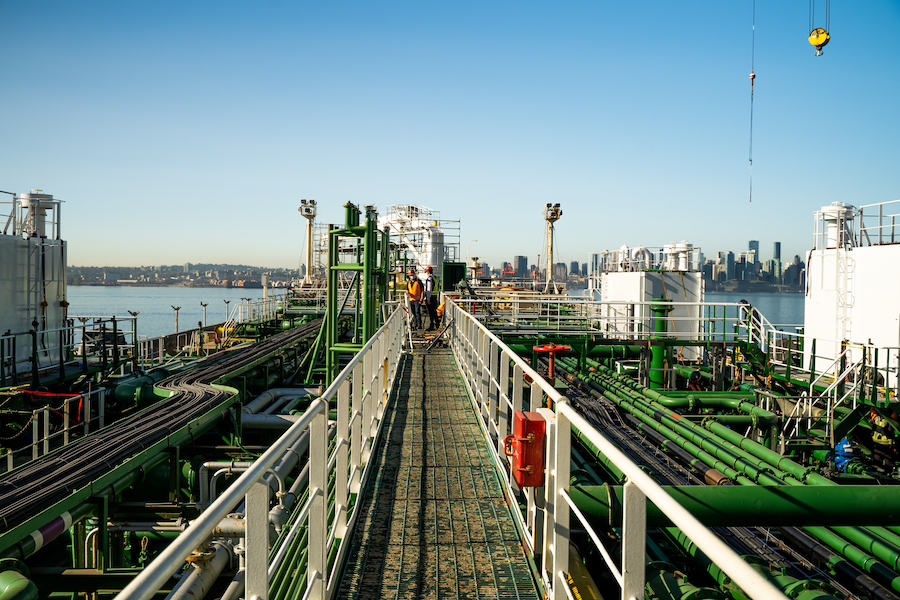 Seaspan’s Vancouver Drydock is strategically located on the West Coast of North America, just north of the Canada-United States border. The shipyard provides a full range of quality repair services, and Seaspan employees understand the importance of delivering vessels on time and on budget. Facilities include two Lloyd’s registered floating drydocks, pier space, a heavy machine shop with two 40-ton overhead traveling cranes and multiple lathes that are capable of handling shafts up to 50 ft. long.

The need to be more efficient and deliver projects quickly and at a lower cost is especially important in the shipbuilding industry. New regulations mandated by the International Marine Organization have resulted in many new system installations that will require implementation over the next five to 10 years. Many of these systems are related to environmental concerns. A prime example is Vancouver Drydock’s most recent project, a ballast water treatment system (BWTS) upgrade.

Seaspan recently installed Novarc Technologies’ spool welding robot (SWR) to help complete the BWTS upgrade. While the work itself was a new type of refit project for Vancouver Drydock, according to Seaspan, the Novarc welding automation technology used in the installation process was an even more exciting and innovative first for the shipyard.

While some shipyards are slow to grasp new technology, the team at Seaspan knew that it was embracing technology that had the potential to provide the company a significant leading edge in an increasingly competitive market. Furthermore, automation solutions like Novarc’s SWR play a key role in the overarching goal to deliver projects faster and at a lower cost.

Seaspan’s Vancouver Drydock required technology that offered productivity and quality improvements for pipe fabrication, which is what led them to the SWR, a solution that doesn’t require operators to have programming knowledge. The collaborative SWR works with a human operator to automatically weld from root to cap without the need to shut off the arc. It delivers consistent high-quality welds, every time.

“We looked at a couple of other options,” says Paul Hebson, vice president and general manager at Vancouver Drydock, “but they were very minor improvements on current technologies. The Novarc product offered a complete further step.”

The company’s current BWTS upgrade project involves welding and installing a variety of pipe spools (about 80 to 90) and installations on ships. With Novarc’s SWR, welders at Vancouver Drydock are able to generate pipe joints, on average, in about 40 min. – a job that used to take 4.5 hours.

“We wouldn’t have been able to make the lead time on our current project without the SWR,” Hebson says. “We probably would have had to outsource some of the pipe fabrication. We have shown more than a half dozen of our customers the machine. It’s a powerful message to our clients that we are investing in a piece of technology that’s going to make the work we do for them less expensive, higher quality and take less time. People really respect businesses that invest back into their business rather than do other things with the cash they generate.”

Hebson adds that a potential client was able to see the SWR as they were finishing its installation. Unsurprisingly, the client was impressed, and they won the job.

“We told them about how we intended to use the SWR in the BWTS upgrade project and the cost savings we could generate for them as a result,” Hebson says. “That was a client we hadn’t seen in about five years, and I am very pleased to say that we secured that contract.”

By implementing the SWR, Vancouver Drydock was able to increase their productivity by more than 400 percent while achieving consistent X-ray quality welds, every time.

Vancouver Drydock has also been able to shorten project timeframes and decrease production costs all while saving money for customers.

“We compete for and win work in three ways: price, quality and time,” Hebson says. “For our customers, the daily service costs are tens of thousands of dollars a day, so two to three days saved is a huge return.”

Quality, of course, is a major part of Vancouver Drydock’s promise to its customers. Ad Bertens, director of business development, says he believes having Novarc on board during the project guarantees the quality that customers have come to expect.

Another major advantage that the SWR has provided Vancouver Drydock is the ergonomics of the machine for the operators. Hebson says the switch has been good for employee health and morale.

“It’s far better than any of the traditional methods,” he says. “There has been a lot less impact on the welders’ bodies and their overall health. They are able to be productive for

most of the day rather than needing to take frequent breaks because they’re sore from being in difficult welding positions for prolonged periods of time. They used to spend all day with their head down as they were welding, and now they are spending all day standing up looking straight ahead. It’s far more comfortable. And most importantly, no more welder neck pain.”

Novarc’s cutting-edge robotic welding systems will soon be used across Seaspan’s shipyards in the Lower Mainland and Vancouver Island, as well, allowing the company’s pipe welding to be done dramatically more effectively and efficiently.