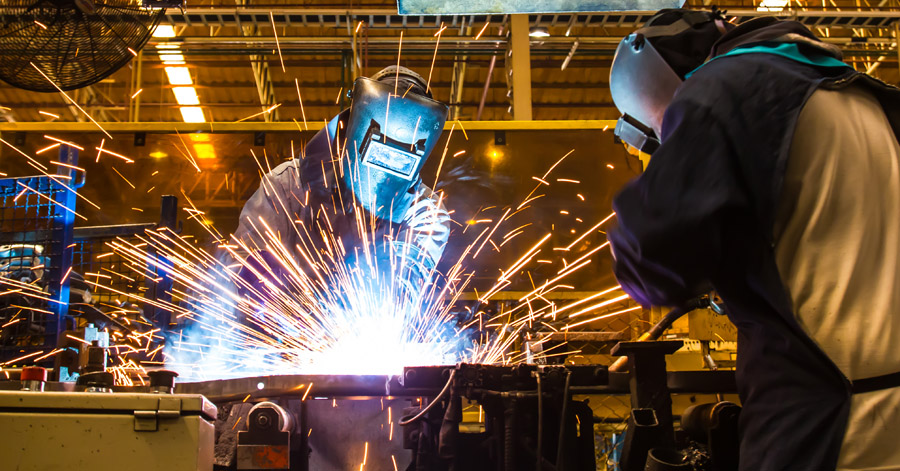 Although the general public might not be aware of it, there’s an official standard for how to do just about everything: building a bridge, plugging in an electrical device and even baking a fruitcake. As trivial as these standards may seem, they’re put in place for the best interests of public health and safety.

The American National Standards Institute (ANSI) oversees the creation, promulgation and use of these standards, which strengthen businesses in nearly every industry, including welding. With a similar commitment to the health and safety of its members and the welding industry in general, the American Welding Society (AWS) works in coordination with ANSI to develop and distribute health and safety-related information.

To understand more about AWS’s efforts to promote health and safety, the team at Welding Productivity spoke with Steve Hedrick, AWS’s manager of safety and the secretary of the organization’s safety and health committee. He explained that multiple committees made up of a variety of volunteers write American National Standards addressing welding safety and health issues and then coordinate with ANSI to establish consensus for those standards.

And they’ve been doing it for a long time. Concerted efforts started in the 1970s, but a focus on safety at AWS dates all the way back to 1944.

“AWS established a safety and health committee many years ago made up of volunteers that are experts on different aspects of welding health and safety,” Hedrick says. “We address a number of subjects, and it’s the efforts of these volunteers through a committee structure that produces the information that we disseminate to keep welders safe.”

A quick look at the AWS website reveals dozens of resources the organization has made available to the public to ensure the health and safety of anyone involved in any aspect of the welding process. In fact, there are more than 40 safety and health fact sheets on the site that cover everything from arc viewing distances and welding cables to laser welding and metal fume fever.

“The first safety and health fact sheets were published in the early 1990s,” Hedrick says. “We would get all sorts of questions from the public and we quickly recognized how incredibly beneficial it would be to develop fact sheets on those topics.”

Typically, the fact sheets are two to four pages in length and are written in easy-to-understand language, “so that you don’t have to be a rocket scientist to understand them,” he says. Once the fact sheets are produced, they’re published on the AWS website for easy access and for use in classrooms and at safety get-togethers in the workplace.

“There are researchers and scientists all over the world that write articles about welding health and safety, and they get published in journals all of the time in all kinds of different languages,” Hedrick explains. “Since the 1970s, AWS has worked with contractors to review all of that literature and summarize it in the Effects of Welding on Health documents.”

Like the health and safety fact sheets, publishing the documents is done as a public service. If someone has an obscure question about the correlation between welding and heart disease, as an example, they can leverage the documents to see what articles have been written on that topic.

While Hedrick describes the information found within the fact sheets and the 20 volumes of the Effects of Welding on Health as “quite extensive,” no conversation on welding health and safety would be complete without bringing up “the bible of welding safety standards,” ANSI Z 49.1, Safety in Welding, Cutting and Allied Processes.

The standard covers the gamut when it comes to safety and health in the welding environment. The document’s abstract says that it covers “all aspects” of health and safety, “emphasizing oxygen gas and arc welding processes with some coverage given to resistance welding. It contains information on protection of personnel and the general area, ventilation, fire prevention and protection, and confined spaces.”

“ANSI Z 49.1 started out as an American War Standard in 1944, and the next revision in 1950 was under the auspices of AWS, so it moved from a National American War standard to an American National Standard,” Hedrick explains.

According to the AWS website, “the huge demand for war materials production placed on the United States brought a tremendous expansion into the use of welding. In mid-1943, it was recognized that some type of code or standard was needed relating to safe practices for performing welding.”

Today, the ANSI Z 49.1 committee, which is an ANSI committee administered by AWS, is responsible for the standard and any updates or revisions that it may undergo. It has gone through more than 10 iterations with the most recent revision taking place in 2012.

Hedrick has been involved with health and safety at AWS for 22 years and prior to that, he did similar work with the U.S. Air Force as a bio/environmental engineer. In both capacities, he interacted with worldwide groups, such as the International Institute of Welding, which is comprised of 17 commissions. He’s a member of the health and safety commission, which meets twice a year.

“We all get together from all over the world to address safety issues, write articles and exchange information, so we all work pretty closely with one another,” he says. “It’s quite interesting how extensive the network is and who the people involved are.”

In regard to those involved with health and safety efforts at AWS, there are about 30 volunteers on the various committees and subcommittees. Those volunteers come from a range of groups, including users, producers, those that have a general interest in welding, government representatives and welding consultants.

“Not only do they donate their time, but they travel to meetings at their own expense,” he continues. “These volunteers are providing a great service.”

When a volunteer retires, AWS disperses recruitment notices to fill the empty position. In doing so, ANSI requires that a committee be balanced and that no one interest dominates the group, such as a committee made up solely of employees from just one producer or equipment manufacturer.

“We’re constantly recruiting – not for just health and safety, but for all of our technical committees,” Hedrick says.

He adds that all of the resources AWS has made available are constantly being updated. The reason for updating a standard is pretty straightforward: to make it better.

“If a committee gets a new member, that new member might have new insight or a different perspective that could result in a better approach than the way that we did it before,” Hedrick says. “We’re constantly trying to improve the safety information that’s been produced. And, of course, new technologies come along that might require new efforts, such as new safety equipment or procedures.”

The resources that AWS produces are used in a variety of ways: in AWS certification courses and education, in classrooms and in places of employment around the nation and around the world. No matter where or how they’re being used, the overriding goal is to keep people safe.