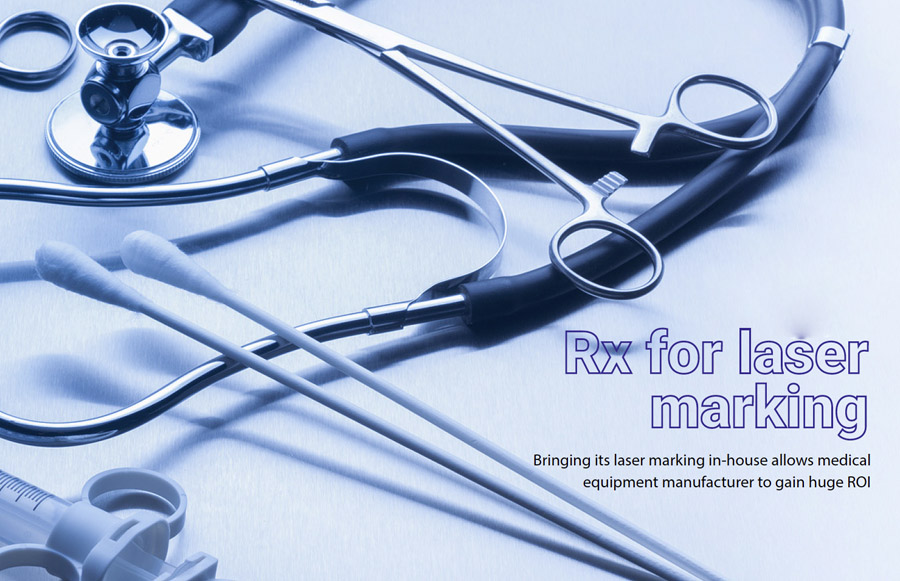 From surgical tools to personal patient products, the amount of equipment required in a hospital is staggering. Unsurprisingly, that inventory moves throughout a medical facility at a dizzying pace. To keep track of it, bar codes must be placed on every piece of equipment, which feed into Real Time Location Systems (RTLS).

Awarepoint has been in business since 2002 as a part of the medical support and management device industry. The company manufactures radio equipment and software to manage RTLS for hospital and industrial organizations. The tracking systems help these organizations realize a dollar benefit by allowing them to maximize utilization of equipment by reducing redundancy due to unnecessary equipment purchases.

RTLS provide a standard operating procedure compliance benefit by ensuring that procedures are followed: For instance, if a piece of equipment must be cleaned between patient uses, the Awarepoint RTLS can determine that the equipment used in patient room A went next to cleaning station B before moving on to patient room C.

The RTLS is implemented with radio frequency identification devices (RFIDs), whichrequire their own unique identifier and are attached to each piece of equipment to be tracked.

Each device must be physically labeled with the unique identifier, and, because they are medical devices, they must be capable of being cleaned and sanitized without damaging the marking. Therefore, printed and adhered labels are not a successful solution.

To produce markings that can be read by a human and a bar-code scanner, laser engraving is a logical solution based on its permanent and high-contrast marks. 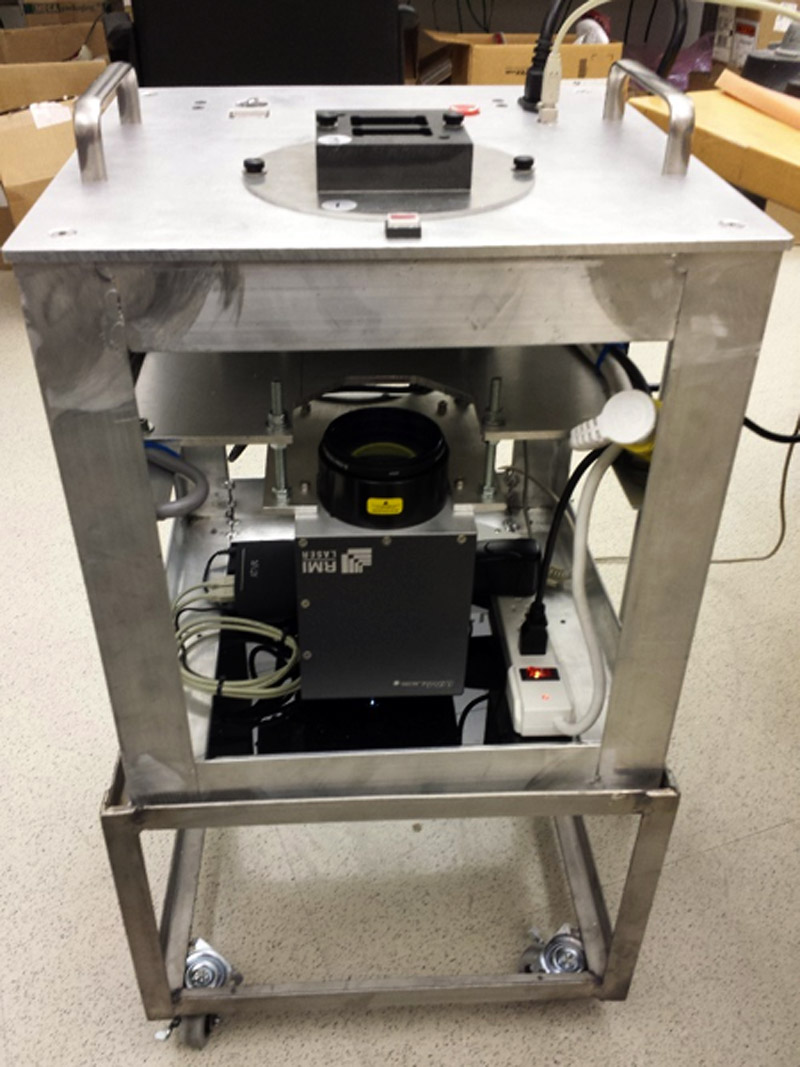 At the time Awarepoint contacted RMI Laser, it was sending out the RFIDsto an outside contractor to be laser marked. This solution was costly, done on the contractor’s schedule and the marking quality wasn’t controlled. Also, Awarepoint was being charged for any errors or problems that occurred during the marking process. The goal was to find a laser marker that would allow the process to be brought in-house where every aspect could be controlled.

John Taylor, the company’s senior sustaining engineer, was tasked with finding the laser marking equipment that would meet his custom requirements and, most importantly, be cost effective. Taylor spends half of his time designing systems and processes for the production of Awarepoint’s products and the other half designing product hardware. He was looking for a laser that he could buy a ’la carte around which he could build his own specialized marking system.

Taylor began where everyone does: searching online. He explored nine industrial laser companies before settling on RMI Laser. One of the main deciding factors was that RMI Laser was one of the only companies willing to sell a laser by itself without an enclosure or extra accessories that Taylor wouldn’t use. Another factor was the amount of information he was able to get from RMI Laser’s experts through email instead of using up valuable timetalking on the phone.

Taylor’s project was internally approved in 2015 and Awarepoint purchased a UM-1 mini laser.

Since purchasing the laser, Taylor has been busy customizing the software and hardware to match his needs. Because every mark Awarepoint makes is unique, his goal for the customization was to make the laser easy to use to reduce the cost of labor and the downtime of adjusting the laser in between marks. 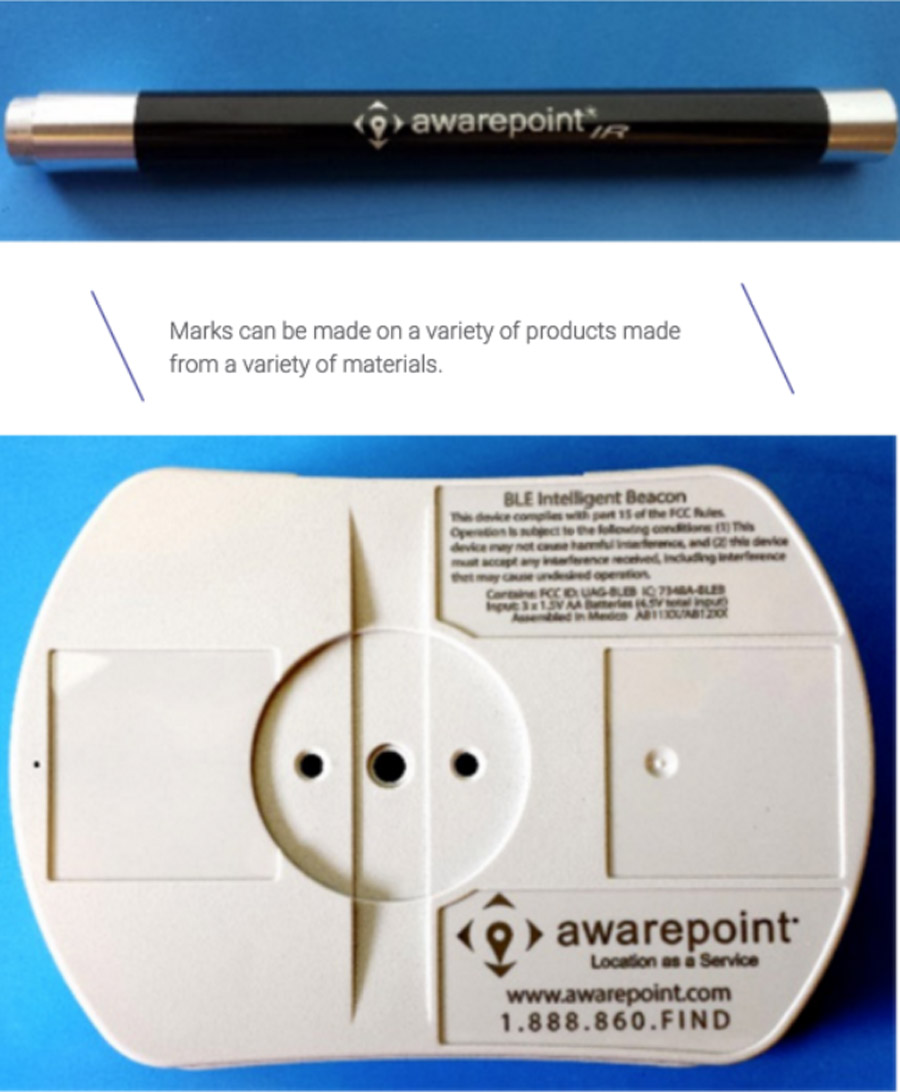 The language of lasers

As Taylor started going through the provided software, he dreaded the complexity of reverse engineering it to fit his needs. As it turns out, the software development kit allowed him to talk to the machine directly using Visual Basic 6, which is one of Taylor’s favorite programming languages.

Once Taylor reverse engineered the Application Program Interface, he was able to generate WYSIWYG (What You See Is What You Get) previews on his application and upload them directly to the laser hardware. All that was left was to start the laser marking session.

Taylor never has to touch the laser itself from power on to power down. He has since made it easier on himself to design projects quicker by abstracting the entire project creation and testing into a simple text file instead of recoding and compiling the GUI program for every update, making the UI (Use Interface) capable of marking any image without code changes.

As for the hardware customization goals, Taylor wanted the setup of the laser not to require the main laser to be turned on to test the position of marks. He also wanted setup to be free of judgement calls by the operator. He decided this would work best if the laser lens was pointing up instead of in the standard position of facing down.

He also designed product pockets, which are intended to have any product positioned at the optimal focal plane regardless of its thickness. These allow unskilled operators to achieve alignment accuracies measured in sub tenths of a millimeter.

Taylor’s final laser marking product is a 16-in. cube with a single USB input and AC power connection. Through the USB input, a laptop communicates to the laser, a user interface and a bar-code scanner. The final process is now as simple as these seven steps: 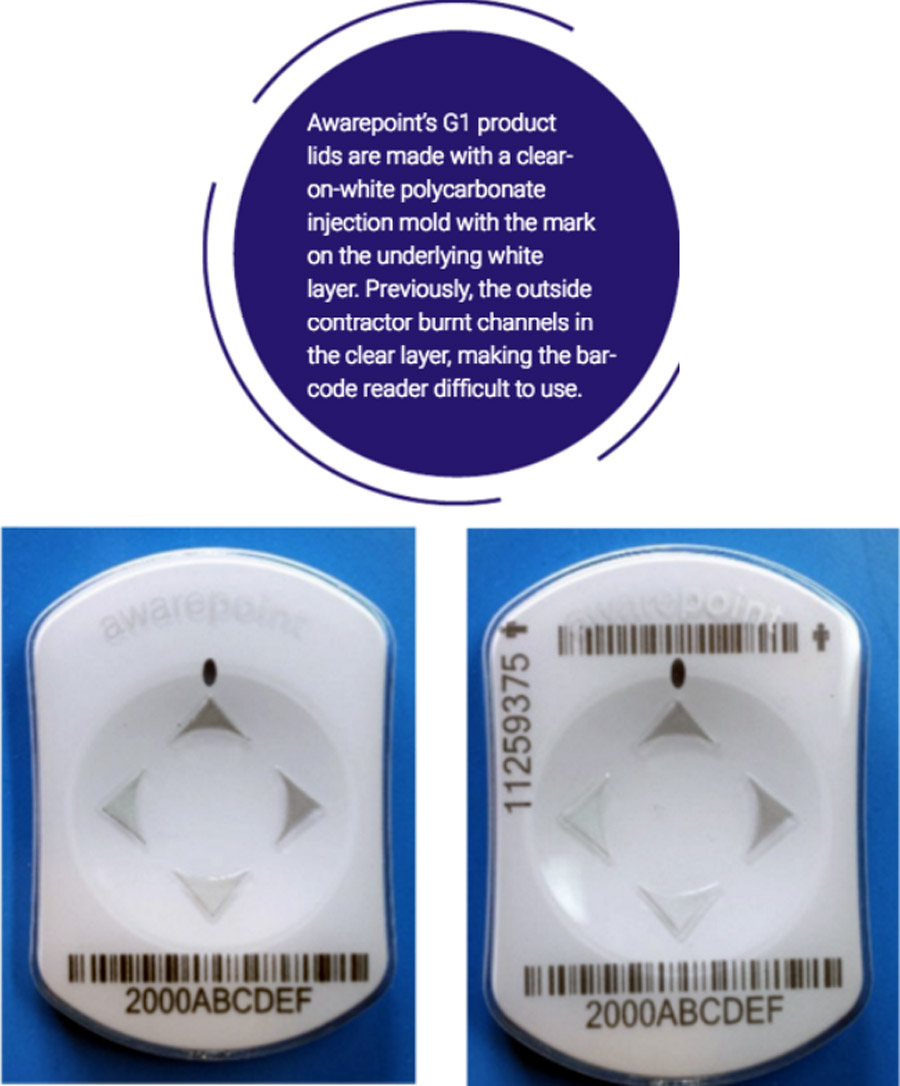 “Our temp finished our first production run of 5,000 units in four eight-hour days,” Taylor says. “Our manpower cost was $0.16 per unit, and that was at a leisurely pace. When I pitched this project a year ago, my number was $0.50 per unit, so needless to say, my finance department is very happy, especially when it used to cost us $3.00 per unit.” 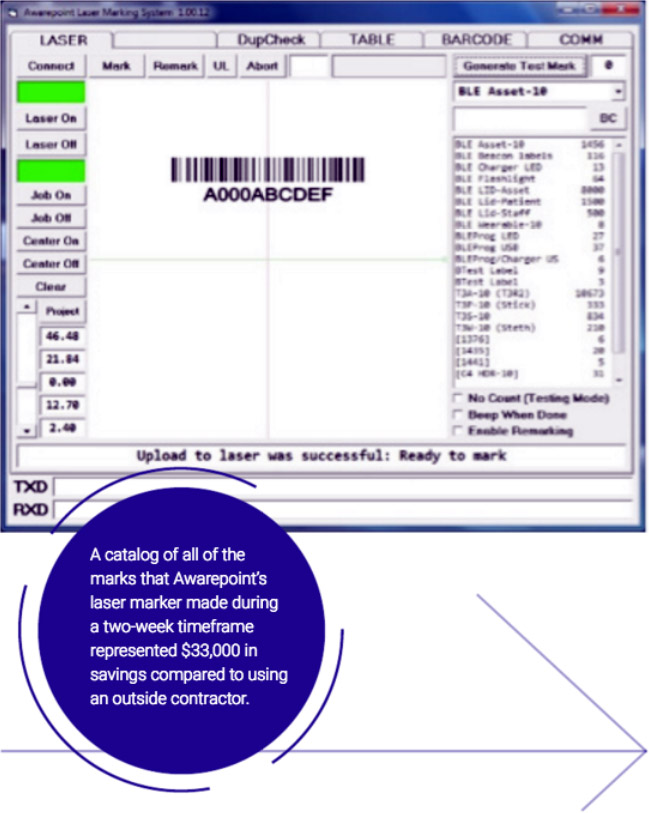 During the first year of ownership, which included only a few months of full production, Awarepoint was able to triple its return in investment, dropping the cost per unit from $3.00 to $0.16.

And that didn’t include the mental benefits of no longer dealing with the problems and uncertainties encountered when working with an outside marking contractor.

Today, Taylor and his team are extremely happy with the machine although they still wonder what took them so long to make the switch. They have found many new uses for the laser as well, including marking labels that were forgotten in an order, marking parts that were previously pad printed and even marking a coworker’s engagement gift.

Plans for the future include buying more lasers from RMI Laser to up production and to be able to have lasers in multiple locations.

“I am convinced that I can mark anything with this laser,” Taylor says. And his advice for anyone trying to get the most out of their RMI laser? “Get under the hood and squeeze the real value out of it.”