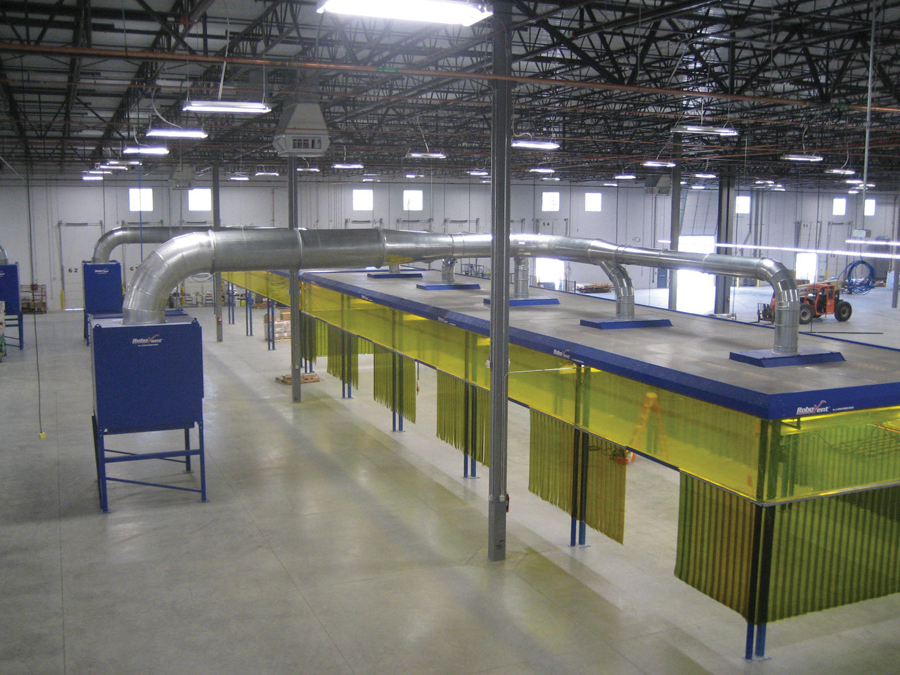 Flexibility is a must for suppliers to the automotive industry. A typical factory can easily move 50 to 70 percent of its welding stations every year on average. Whether it’s a lean initiative to shave costs off of each part or the rollout of a new car model, being flexible in terms of floor space configuration is part of automakers’ and auto parts suppliers’ business.

Cleanliness is also key. If an auto contract is up for grabs, decisions are based on a facility’s cleanliness just as much as on how well-run the company is. Beyond that, a dirty, dingy factory will have a hard time recruiting new employees compared to one with white walls and a clean, crisp environment to work in.

The tie that binds is fume extraction. When a factory is properly ventilated, particulates won’t accumulate on surfaces – a major leg up for staying clean. But that itself can be a challenge when equipment needs to move. Many fume extraction systems are fixed in place or cumbersome to move, making the task of reconfiguring a difficult one.

Laser cutting, welding, powder coating – all of it needs to be managed in terms of fume extraction. Compared to other industries, however, the shear volume of welding taking place in automotive facilities makes fume extraction even more important. The fact that automotive manufacturers must reconfigure their floor plans to accommodate changing production demands adds additional challenges to the task of maintaining clear air.

Faced with space constraints, floor plans that are prone to change and a large amount of robotic welding cells, automotive manufacturers turn to RoboVent, a leader in clean air solutions, because of the company’s long tenure in the automotive fume extraction market. Its recently released automotive solutions are the result of that long tenure and are proving to be an unmatched solution to keep automakers agile and competitive.

“The automotive industry is a heavy welding industry all the way around,” says Jim Reid, general manager and co-founder of RoboVent. “They do a huge amount of robotic welding in very tight spaces. With a robotic welder, you can weld five times as much as a manual welder in about the same space. The auto industry is also constantly striving to drive down the cost per part. Watching every penny, the use of floor space is huge. Compared to some industries, auto manufacturers pack twice as much welding into a 10,000-sq.-ft. area.”

Automotive manufacturers are also working with high-volume production in three shifts. The amount of fumes created from that level of production – without fume extraction – would be enormous. To counteract those fumes while also keeping flexibility needs in mind, RoboVent developed the Spire and the Grid, two products launched in late 2015.

“We expect the Spire to be the easiest fume extraction system to access and install,” Reid says. “It’s taking our previously released floor saver system to the next level. The original unit is based on four legs – two on each side of a robotic cell – each taking up an 8-in.-by-8-in. piece of real estate. By the time you set it down, you’re taking up to 4 sq. ft. of real estate, just for the legs.”

Although the floor saver system was and is a welcome solution for RoboVent customers outside of the automotive industry, auto manufacturers needed something smaller. The Spire hits that mark, measuring 15 ft. tall and only taking up a space of 30 in. by 32 in. For perspective, its footprint is not much bigger than a wire barrel.

“You can put it anywhere around the robotic cell, even up to 15 ft. away tucked in a corner,” Reid says. “In addition to achieving size demands, it’s cheaper and easier to maintain. Because the Spire doesn’t have an extensive framework to hold it up in the air, the cost and time involved to assemble it, move it and reassemble it is much less than other fume extraction systems.”

Workers also don’t have to get on a ladder to perform maintenance. Everything is accessible from the floor, and no special tools are required. Maintenance costs are also reduced thanks to a maintenance-free spark arrestor and RoboVent’s proprietary eTell system, which monitors the unit and alerts users when a filter needs to be changed. It also offers instructional videos that walk users through maintenance activities.

Compared to the Spire, RoboVent’s new Grid system is far more complex. For automotive customers that want to run a ducted system throughout their facilities, however, it’s proving to be the go-to solution. It consists of modular, standardized ductwork and components that can be easily reconfigured as needs change. It also reduces the ductwork size along each joint, maintaining the same air pressure throughout the system.

“For typical ducting systems, moving a robotic cell is difficult,” Reid explains. “After you make a few moves, the ductwork becomes imbalanced – a tangled-up mess – causing the entire line to be totally reworked. With the Grid, filtration units can be placed wherever you need fume extraction.”

The Grid is also energy efficient. Every time a unit turns off, the system slows down to save energy. Reid says that it uses 70 percent of the energy required by traditional ducting systems, giving an example of a facility with 50 robotic cells to explain how it delivers energy savings over time.

“If you looked out across a plant at any point in time, you’d find a maximum of 35 to 40 of the 50 cells are welding,” Reid says. “The robotic cells that aren’t welding are loading parts or setting up a job. Taking into account that every robotic cell won’t be working at the same time, you can design a ducting system that’s 20 to 30 percent smaller in actual filtration size.”

The name says it all

The method in which fumes are dealt with is a major consideration for manufacturing facilities no matter the industry, which is why RoboVent’s customer base runs the gamut in terms of industry type. RoboVent, however, has been entrenched in the needs of the automotive industry since the company’s founding in 1989 in Detroit. That long-running relationship resulted in a deep understanding of how the auto industry leverages its floor space – and therefore, how RoboVent engineers designed the Spire and the Grid.

“The RoboVent name came to be thanks to its deep roots within the automotive sector,” explains Frank Cea, director of marketing communications and business development for RoboVent. “At the same time that RoboVent got its start, the robotic industry was booming. As soon as manufacturers first put robotic welders in their facilities, however, there was a problem with dense smoke. Literally overnight, auto facilities had more than tripled their welding output – and the associated fumes. They were already high-production facilities, but robotics took the need for fume extraction to a whole new level.”

Located in Detroit, proximity gave RoboVent a unique opportunity to work with automotive manufacturers that were struggling with ventilation and filtration. To solve these challenges, RoboVent developed some of the first cartridge filters specific to robotic welding. These filters addressed flammability concerns of mixing sparks with paper filters. The company’s spark arrestor, which was later released, further reduced the chance of fire.

By 2000, as RoboVent’s relationship with automotive manufacturers deepened, floor space and flexibility needs came to the forefront of product designs. RoboVent engineers produced the floor saver system, which at the time, was the smallest fume extraction system available. Since the boom in robotic welding, auto customers have made up 80 percent of RoboVent’s business.

“We basically wrote the book for fume extraction with robotic welding,” Reid says. “The release of the Spire and the Grid take us back to our roots in producing automotive solutions.”

During RoboVent’s 30 years in business, automotive manufacturers have had their ups and downs, but RoboVent has been with them the entire time. During the downturn in 2008, the company got an even deeper understanding of the workflows, processes and challenges of auto parts manufacturing. In response, automotive executives at companies such as Honda, Toyota, Mercedes, Tenneco and Tower International have confirmed RoboVent’s partner status.

“When they’re evaluating a supplier or getting ready to award a certain contract, the critical goal is to reduce welding costs and one way to do that is by having a safer, cleaner work environment,” Reid says. “Fume extraction is an essential part in achieving that, and our automotive customers appreciate the focus that we’ve put on their industry.”