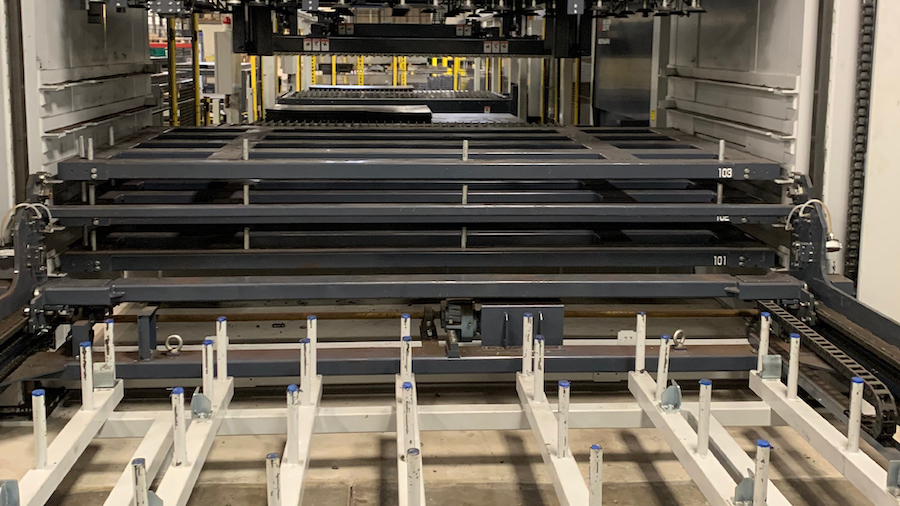 Most shop owners have a unique story about how they got into the business. For some, it was the pursuit of a new product idea. Others bought out a retiring employer. Many, tired of working for someone else, decided to take the leap and strike out on their own. For Freeman “Fritz” Schlabach of Millersburg, Ind., it was his need for a hobby.

“I was bored,” he says. “I was working in the mobile home industry at the time and we were only getting three days a week, and it was every other week at that. I started doing a little metalworking and sandblasting and painting in my garage to stay busy. I’ve always liked making things, and fortunately, I’d picked up the necessary skills as a teenager working at my uncle’s sheet metal shop.”

That was in 2001, and it wasn’t long before Schlabach started doing prototype work for friends and neighbors in the area, so-called “odds and ends” for people who couldn’t afford to pay the regular shop rate a typical machine shop or fabricating house would have charged. And some of them had their own product ideas, which Schlabach was happy to pursue.

“Before long, it seemed like I was making parts for everyone,” he says.

By 2007, Schlabach had five full-time employees, and after years of working nights, weekends and everything in between, he put the mobile home industry in his rearview mirror forever. Rock Run Industries LLC was born. Today, the company has 100 employees, two facilities and has enjoyed tremendous growth over the past two years, despite the Covid-19 pandemic.

Interestingly enough, much of this recent success comes from an unexpected side effect of the pandemic: record RV sales. Given its proximity to many of the nation’s leading recreational vehicle builders, Rock Run was a key supplier to this manufacturing sector for many years, so when the traveling public had to set aside its traditional vacation plans in favor of socially distant camping getaways, Schlabach was ready.

“Shortly after the pandemic started, we had an opportunity to buy an industrial park with eight buildings, an expansion that brought us to our current 400,000 sq. ft. of operating space,” he says. “And as part of that investment, we also bought our first Mitsubishi laser.”

Schlabach explains that he’d always wanted to own Mitsubishi equipment but had instead opted for competing brands over the years due to their lower price tag. After talking to people at various trade shows, however, and making a visit to the MC Machinery Systems Inc. in Elk Grove Village, Ill., the Mitsubishi distributor for North America, Rock Run took delivery of a GX-F series fiber laser. An identical machine came along a few months later, this one with an automated tower system.

“That’s what provided us with the opportunity to grow,” he says. “We’ve had automated fiber lasers for years, but the Mitsubishis are the first ones

where we can go home at night confident that they’ll still be running the next morning.”

In addition to higher uptime, Schlabach is equally impressed with MC Machinery’s service levels. “After visiting their facility and taking a hard look at the service department, I was convinced they were the company I wanted to go with. I wasn’t wrong. We’ve had very few problems with the new equipment, and when we did, MC Machinery has shown itself to be a true partner in our laser cutting operations.

“The technicians appear to be trained well, are willing to work with us and hear what we say, and just seem to have a better attitude and personality about servicing the machine than what I’ve seen from others,” he adds.

Aside from letting Rock Run keep up with unrelenting demand from the RV sector and other industries, the new fiber lasers’ greater uptime and increased capacity have also allowed Schlabach to pursue another dream: building custom aluminum cabinetry for the residential market.

“We’ve been dabbling in this area since about 2016 but never had the time or space to pursue it,” he says. “With the two Mitsubishis connected to a common automation system, we’re now able to build cabinetry while still meeting our regular commitments.”

The pandemic has created additional opportunities for this growing company. Other area manufacturers, faced with Covid-related labor shortages, have turned to Rock Run for help with laser cutting and, sometimes, bending parts. It’s partly because of this additional work that Schlabach recently ordered a third Mitsubishi fiber laser, which he expects to arrive by April.

Growth is great, he suggests, but achieving it depends on several factors, beginning with the manufacturing process.

“I’ve always loved machinery and the act of making things, but something I love just as much is the development of robust manufacturing processes,” Schlabach says. “If I can improve a process through investment in new equipment, then that’s what I’ll do. It’s amazing the productivity that can result when you combine a robust process with a highly talented workforce and very sophisticated machinery. That’s when great things happen.”