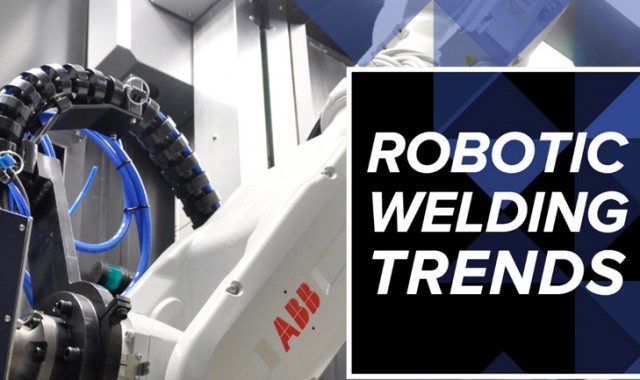 When looking for the latest trends in robotic welding, it’s best to go to a source with more than a century of experience in following and establishing trends of its own. ABB Robotics, a leading supplier of industrial robots, modular manufacturing systems and services, introduced the world’s first all-electric, microprocessor-controlled, commercially available robot in 1974.

And, for more than 100 years, ABB’s predecessor companies have helped set the pace for technology enhancements that improve productivity. Here, Erwin DiMalanta, director of welding and cutting business lines for ABB, addresses major trends in robotic welding and ABB’s role in advancing them.

With every new material and welding method that emerges, robotic manufacturers must keep up, and they’re doing that with more advanced software interfaces.

“Nothing stands still,” DiMalanta says of the ever-evolving technology used in industrial settings. “To take advantage of some of the unique ways of welding or joining materials, you need advanced interfaces on the robotics side. You need to be able to access and utilize the latest welding modes built into today’s power sources.”

Examples include, DiMalanta says, Lincoln Electric’s surface tension transfer (STT), Miller’s regulated metal deposition (RMD) and Fronius’ cold metal transfer (CMT) welding modes. Each technology offers advantages to achieve proper penetration with low heat input, but each takes a different approach in the way those parameters are set and controlled. Advanced robotic interfaces, therefore, must be capable of selecting, setting and tuning the various modes available in the different welding power sources, sometimes on the fly during live welding, in order to determine the best settings.

Additionally, welding engineers want the ability to set up the welding parameters from a single point of control, whether it’s from a robot’s teach pendant, welder front panel or remote control unit. A good interface needs to be easy to use and have the flexibility to leverage the features of the welding equipment.

To achieve this, ABB developed interfaces that accommodate the various approaches used by the welding power supply companies. For Lincoln Electric, ABB developed an interface that works with Lincoln ArcLink XT, and for Fronius and Miller, it is accomplished using a more traditional Ethernet I/O-based interface.

“Welding OEMs are constantly developing new welding modes in response to metal fabricators’ varying needs and material types,” DiMalanta says. “They’ve created these customized modes based on the material and thickness that needs to be joined, shielding gases to be used and other welding process variables.”

He explains  that welding companies are coming up with these modes to fit the applications and the trends of the day. For instance, high-strength boron steel is a material that wasn’t used heavily in the automotive industry some eight to 10 years ago, but is used regularly today to achieve better safety performance and fuel economy.

Knowing the changes that are occurring in regard to new materials, DiMalanta says it’s important that robotic manufacturers also address these needs. ABB has been working diligently to ensure its customers have the right tools for the current trends.

“Do robotic manufacturers have an advanced interface to take advantage of some of the advances in welding modes?” he asks. “Some do and some don’t. Fortunately, in the case of ABB, we do.”

In addition to new modes based on material needs, capabilities such as adaptive weld compensation based on robot speed are also trending. These processes are advantageous where welding parameters are automatically adjusted to account for the robot travel speed, resulting in better quality welds in situations such as welding around a corner.

To stay ahead of the curve, DiMalanta says that ABB collaborates with major welding OEMs to deliver the advanced features its customers need. The company works with Fronius, SKS, Miller, Lincoln Electric and others to create cutting-edge solutions.

A flying start for MIG

Robots assist in making a massive number of welds in the automotive industry every day, and decreasing cycle time – even by a millisecond – can make a huge impact on productivity. In a competitive marketplace, faster cycle times, regardless of how small, are always welcome.

ABB is working with something called flying-start capabilities that can shave off milliseconds per weld. The flying start is essentially the process of turning on the power to the welding source before it arrives at the weld location.

In a traditional welding setup, DiMalanta explains, there are a few steps that must be followed before welding can begin. First, the robot goes to the starting point, then the control system recognizes the robot’s position, shielding gases are turned on, the welding equipment is initiated and the weld begins once the arc is established.

“With flying start you’re able to reduce that sequence time because you establish the arc sooner,” DiMalanta says.

The flying start isn’t unique to ABB, but because of the company’s reputation for superior path and positional motion control, it is seeing positive results with its approach to the flying start. The company is also offering flying-start functionality regardless of the power source.

“We accomplish the flying start based on the precise position of the robot versus a time-based approach, which can sometimes introduce errors,” DiMalanta explains.

ABB has been working on flying-start mode technology that does not rely on separate controls or a PC platform, and it’s something the company has worked to refine. Specifically, ABB has worked closely with Trumpf to perfect the solution.

Laser welding on the fly

Laser welding – which at this point is more of a staple than a trend – is seen on the manufacturing floor in various levels of sophistication. In the most generic terms, any robot can turn on a laser and laser weld, DiMalanta explains. In a non-advanced approach, joining two pieces of metal, such as on a seatback of a car, involves moving the robot into position and activating the laser to join the materials on hand.

Advanced welding on the fly, however, is a continuous motion process where laser welds are made while the robot is moving, thereby reducing overall cycle time. The process is dependent on a good interface with the robotic motion control system.

Once a weld is in the field of view of a scanning optic laser welding head, and synchronization between robot motion and laser equipment is established, the laser is enabled, moving to the identified locations to produce the welds on the material. From there, the process can happen over and over with high repeatability and accuracy.  Furthermore, ABB’s solution integrates all the key functions of setup, programming and weld adjustments onto the robot’s teach pendant, rather than requiring separate peripheral devices like a PC.

DiMalanta explains that, while perhaps a dated analogy, it’s like the neighborhood newspaper delivery boy stopping at every house to deliver the paper versus a perfectly timed, accurate throw directly onto the porch as he rides along on his bicycle. He finishes his route much faster so long as the throw is accurate.

Having a robot and a human operator collaborate in close proximity and safely is a trend for ABB and a trend for the robotics industry as a whole, DiMalanta says. More collaborative robots are coming into the marketplace from robotic companies both large and small. In fact, ABB recently announced the launch of YuMi, the first truly collaborative dual-arm robot.

Regardless of whether you’re a metal fabrication engineer, assembly engineer or engineer in the electronics industry, there are a lot more paradigms to look past in terms of how to automate a task. Furthermore, DiMalanta says robotics professionals are looking at different ways that collaborative robots can be used in a variety of different industries.

“That’s maybe a three- to five-year trend for the welding industry,” DiMalanta says. “We are looking at different ideas and different ways of incorporating so-called collaborative robots in metal fabrication and pretty much all industries. We’ll see this trend continue.”

As an example, gesture-based programming is a collaborative robotic technology currently in development that could be used in welding applications. Instead of using a teach pendant or offline programming tool, the robot recognizes gesture commands to generate a program. In this way, the operator collaborates with the robot in different ways than traditional approaches to programming.

ABB’s RobotStudio is a simulation programming software platform that takes advantage of advanced features of power sources. RobotStudio is not simply a robot simulation tool; it’s an end-to-end software tool for deploying robotics, from concepting and commissioning to programming and maintaining a robotic system.

With RobotStudio, many common tasks like programming or setup can occur offline, without having to shut down a production line. The software can even be used before robotic equipment is installed, for configuring process flow and integrating the various components of a welding system.

“These days,” DiMalanta says, “it’s hard for technicians and engineers to interact with different streams and systems. So, we try to centralize a lot of those setup features and commissioning-type activities on our RobotStudio platform.”

RobotStudio makes a robotic technician or engineer’s job easier. For example, it has add-in features that allow a commissioning technician to configure the welding power supply, welding modes and setup parameters all from within RobotStudio.

“Using the RobotStudio platform,” DiMalanta explains, “we are able to select only required welding modes needed for an installation. This way, the operator only has a handful of welding modes to choose from, not dozens.”