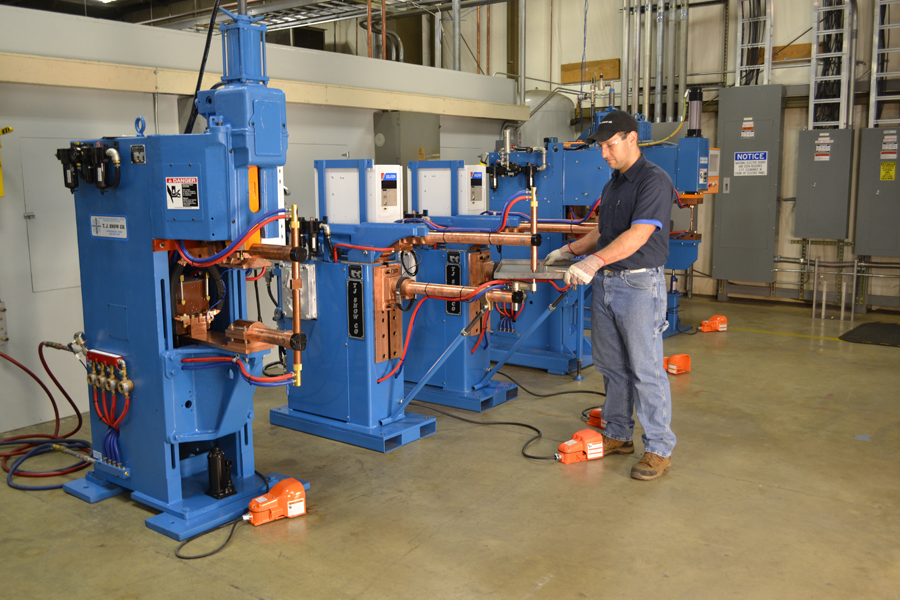 Jeff Morgan worked in the automobile manufacturing industry for four decades, moving up to senior welding engineer before taking his current position in sales with T.J. Snow Co., a Tennessee-based company recognized as a full service leader in resistance welding. Morgan came up in the industry at a time when resistance welding utilized ignitron tubes and thyratron vacuum tubes to control the timing process. Today, he says, solid state has taken over. But more significant changes in the resistance welding process have been and continue to be influenced by newer, lighter and more difficult to weld materials.

Morgan and others in the industry refer to them as “exotic” materials. However, even aluminum can present challenges in power resources for resistance welding. Morgan says the “weldability envelope” becomes more complicated.

Ray Michelena, who has a number of titles with T.J. Snow, including safety director, seminar instructor and chief pilot, says there is a demand for quality in resistance welding, which not too long ago meant that if a customer knew there were 12 welds involved in a part, they wanted at least 10 of them to be good.

“In today’s world,” Michelena says, “customers want those 12 welds to be perfect. So, in that aspect, I see that resistance welding has gotten more complicated.”

Every welding method has its intricacies and resistance welding is certainly no different. However, these intricacies could be a challenge to welders unaccustomed to the process. For instance, Morgan says an issue that needs to be addressed involves making sure that the right people in a production plant understand how to maintain the machinery involved.

“In resistance welding, the cost of quality is maintaining the components that perform the welds,” he says. “Maintaining electrodes, shunts and electrical connections inside the gun – maintaining the entire process becomes a real issue.”

Part of the problem is that there is no longer a fundamental guideline for who should be in charge of the maintenance of the resistance welding machinery. Morgan says when he began his career at Ford Motor Co., pipefitters were in charge of maintaining the welding tips, while at other plants, that was a job for electricians.

“The number of people involved in maintaining the process has grown exponentially,” Morgan explains. “It’s very important that those folks be trained, and I think that’s probably some of the greatest challenges – getting them to understand why they have to change the tips, when the tip dresser is working properly or not and if the gun is installed properly.”

These seemingly small facets of the process can build into problems. As Michelena explains it, these small issues are, “like a snowflake, and every time those snowflakes come together, it’s a blizzard.” And unfortunately, for some workers who have been executing a process a certain way for many years, they’re reluctant to change.

“A lot of time with people not understanding the variables that you have to keep up on,” Michelena notes, “they let the machine go to failure. They don’t understand what they have to do to keep the process and the machine working correctly.”

Morgan says more workers need to “learn the dirty skills.” However, today’s newest welders aren’t as interested in getting their hands dirty to work on pieces of equipment that might “require them to clean their fingernails once in a while.” Rather, they rely on computer processes.

“The fact is,” Morgan claims, “there are not as many people out there who want to do it. There aren’t as many people with the mechanical aptitude that the industry once had. So, that’s certainly a factor.”

Michelena agrees and says the industry has generated the problem.

“Customers want to hire people off the street as cheap as we can,” Michelena says, adding that they are put in front of automated machines with little to no skills required to operate them. “That was the manufacturer’s level of expectation from the employee. The problem we have here in the United States is that mentality – we don’t have people who want to take on the understanding of that process. We generated it ourselves, and now we’re living with the consequences.”

The issue also comes down to the manufacturer’s management team not understanding the process, says Morgan. For instance, management needs to know that if they’re going to work aluminum into a resistance welding operation, they need to know why they’re dressing the tips and understand that the tip must be cool when they weld. The electrode face has to be squared to the part – small items that, again, add up to inefficiencies when not executed correctly.

Medium frequency direct current (MFDC) might be more expensive to implement into the shop environment, but when resistance welding is the process of choice, Morgan says there are advantages to MFDC. He says he doesn’t recommend older facilities with no plans to introduce exotic metals to implement MFDC due to the cost involved, but there are definite advantages to speak of for those that do.

“If I’m building a brand-new facility, I would definitely suggest MFDC,” Morgan explains. “It’s going reduce your power consumption in the building; the energy flow to the weld is more consistent.”

Ultra-high-strength and high-strength materials all preform better with MFDC, he says, because the “heat rise time” is faster.

“We’re also learning that MFDC works very well with projection welding,” Morgan says. “We find that with MFDC, the rise time, which is the time from zero to maximum energy, is very fast.”

Michelena says the MFDC advantages also include the fact that it’s a three-phase system, meaning the welder can draw power off three legs instead of just two, which helps to save on power consumption. Furthermore, he says the size of the transformer used in MFDC processes is smaller and about two-thirds less weight than what is required with AC systems.

“You have more versatility on what types of materials you can work with on the MFDC system,” Michelena adds, “whereas an AC system is basically for cold-rolled steel and stainless steel. You can try to get by working with AC on more advanced materials, but MFDC definitely has advantages.”

MFDC also allows manufacturers options when it comes to the size of robots used on the shop floor.

“A lot of times,” Morgan says, “you can use a smaller robot. That can actually sometimes pay for going to MFDC if you’re putting in a new line or new process. If you buy a smaller and cheaper robot, you can actually afford to pay for the MFDC resistance welding components.”

Michelena serves on the American Welding Society’s (AWS) Committee for Resistance Welding as well as the subcommittee on Certification of Resistance Welding Personnel. He says AWS is working to bring more attention to resistance welding as it has with most other methods of welding.

While there is a resistance welding test welders can take to be recognized as a Certified Resistance Welding Technician (CRWT), there currently is no official course on the subject, which means welders have to put years of time in with resistance welding in order to pass the 100-question test (70 questions of which they must answer correctly to receive the designation).

“We need to have the recognition that resistance welding is a very important process,” Michelena says. “The CRWT will help establish that importance. The problem is, the AWS doesn’t yet have a training course for this.”

Michelena says he’s been pushing for the AWS to come up with a course that helps welders with their certification. He says programs such as that take months if not years to establish. However, he and a few others at T.J. Snow lead monthly regional seminars on basic resistance welding and also offer six-hour training courses at customer plants, which includes two to three hours of hands-on work with resistance welding machinery.