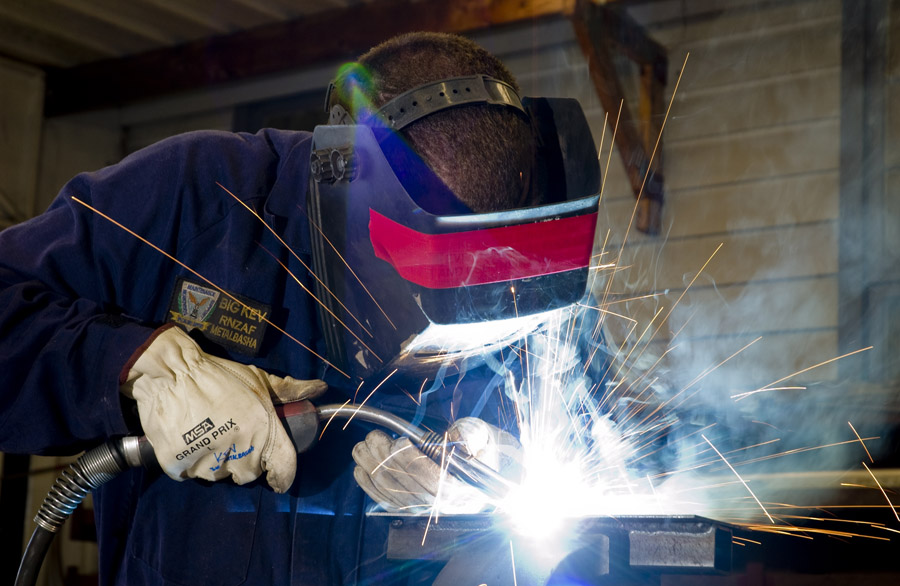 A silvery metallic element commonly found alongside iron ore, manganese is used in the production of steel and aluminum alloys to improve malleability and corrosion resistance. It’s a key component in low-cost stainless steel and is also found in most welding consumables. Due to its ubiquity in metalworking, welders should assume that their weld smoke contains manganese along with other toxic elements.

Fortunately, there are many options when it comes to reducing manganese exposure for welders. To reduce the risks of exposure, here is what welders should know and what companies can do.

Considering the risks it brings to welders, manganese, interestingly, is considered an essential nutrient and is found in many over-the-counter vitamin supplements. In very small oral doses, it helps to prevent osteoporosis and other health conditions. But, when inhaled into the lungs in the amounts contained in weld fumes, it becomes a toxin with devastating impacts on the nervous system, lungs, liver, kidneys and male reproductive system.

Manganese exposure has acute and chronic effects. It is one of the culprits behind “metal fume fever,” a temporary flu-like illness resulting from overexposure to weld fumes. Acute effects of high levels of manganese include:

Over time, continued manganese exposure can result in serious chronic health problems. The most common of these is manganism, a neurological disorder that mimics Parkinson’s disease, multiple sclerosis or Lou Gehrig’s disease. Symptoms of manganism include cognitive impairment, tremors, generalized muscle weakness, speech impairment, and balance and gait problems. Fortunately, many of the symptoms of manganism are reversible if caught early and sources of exposure are eliminated. However, neurological damage will become permanent if exposure continues.

Inhaling manganese fumes can also cause damage to the lungs and increase susceptibility to pneumonia and chronic bronchitis. It is also associated with kidney damage and male infertility.

So how much manganese exposure is considered safe? Manufacturers and fabricators are legally responsible for maintaining manganese exposure for welders and other workers within permissible exposure limits (PELs) set by OSHA. But these are not the only guidelines that manufacturers should consider. The American Conference of Government and Industrial Hygienists (ACGIH) and the National Institute of Occupational Safety and Health (NIOSH) each have set their own recommended limits.

OSHA PELs have the force of law. They are set based on NIOSH recommendations, but with consideration of the economic and technical feasibility of achieving the standard. There are often different standards for different industries based on these considerations. The General Industry PEL for manganese exposure is set at a 5 mg/m3 ceiling, meaning this limit cannot be exceeded at any time.

ACGIH sets threshold limit values (TLVs) based purely on human health impact as documented in scientific literature. ACGIH standards tend to be the most stringent because they are updated as new studies become available and are not concerned about the technical or economic feasibility of the standard. The ACGIH TVL for manganese is 0.1 mg/m3 TWA or 0.02 mg/m3 TWA for respirable particulate matter.

So which standard should manufacturers aim for? Although OSHA has the force of law, ACGIH guidelines are increasingly seen as international best practices for worker health and safety and are often one step ahead of new regulation. Companies that are able to achieve this lower standard will provide maximum protection for workers and be prepared for any changes in the regulatory environment.

The first step for companies concerned about manganese exposure is to evaluate their current exposure levels. This should include both assessment of individual exposure levels for employees working near fume-producing applications and ambient levels of particulates in the air that everyone in the building is exposed to.

A comprehensive evaluation will include several steps. 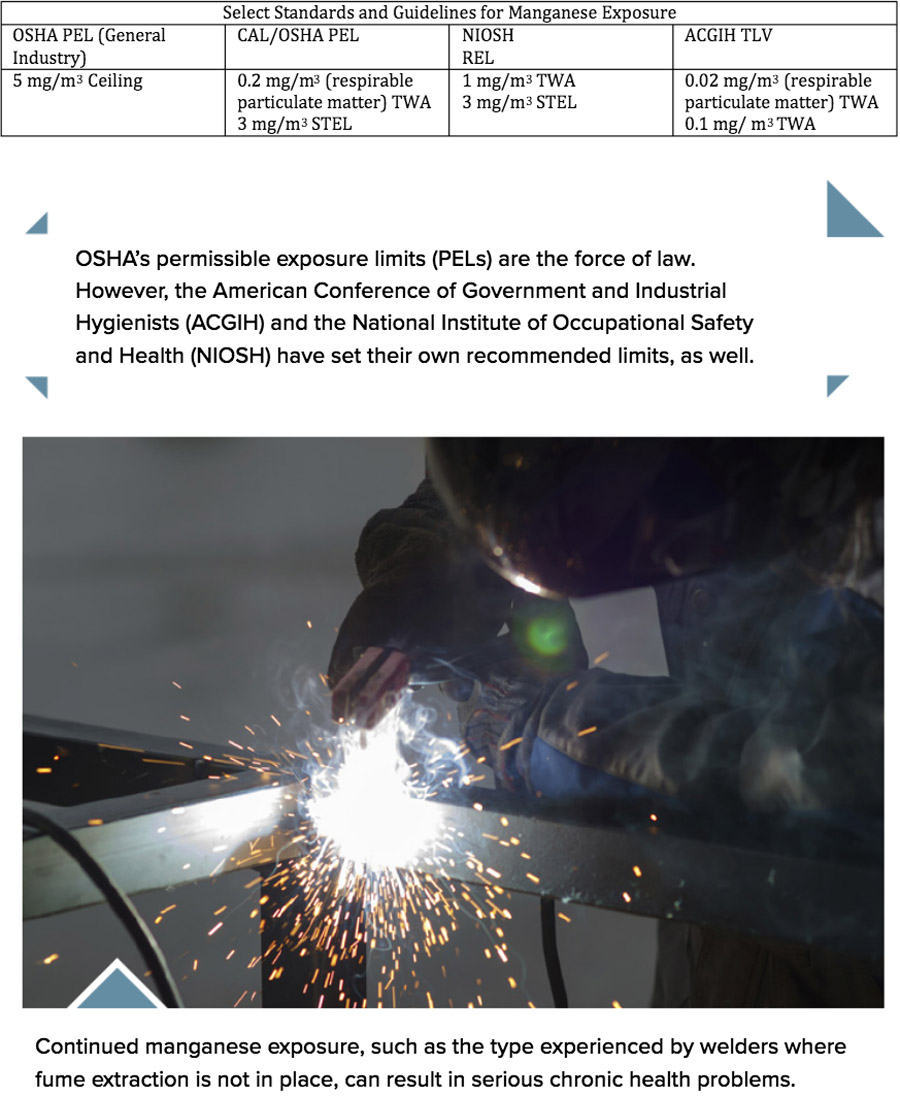 Since inhalation is the most significant route of manganese exposure for workers, the most important thing that employers can do is reduce the total level of airborne particulates that workers are exposed to. OSHA mandates that changes to work processes and engineering controls be used as the first line of defense against manganese exposure in the workplace. Personal protective equipment (PPE) should only be used as a backup in cases where the PEL cannot be met using engineering controls.

There are three levels of protection that can be used to reduce manganese exposure.

1. Process improvement: Sometimes, it may be possible to change materials or processes to eliminate or reduce exposure to manganese. Unfortunately, this is not always possible when it comes to welding, especially when working with steel. Companies, therefore, should implement housekeeping processes that prevent the spread of manganese-containing dusts and ensure that workers do not eat or drink around dust and fumes. They may also consider using curtains or walls to partition off manganese-producing processes and make fumes easier to collect.

Smart building pressure management using make-up air and exhaust systems is also very effective at containing and managing fume migration, especially in large, open facilities. Cleaner areas, such as assembly, warehouse, shipping, paint areas and offices should be pressurized with positive air displacement, and the areas where fume is produced should be kept under negative pressure.

2. Engineering controls: Ventilation or air filtration equipment should be used to reduce the levels of manganese-containing dusts in the air to as low a level as is technically feasible. Source capture systems will keep fumes out of the ambient air.

When engaged in manual welding or grinding, it’s important to make sure that the control option keeps fumes and dust out of the breathing zone. Robotic processes can often be contained under hoods. In many cases, source capture systems cannot capture 100 percent of the fume produced. In these instances, ambient air filtration systems can be used to capture residual fume and clear the air for the whole facility.

3. Personal protection equipment: When PELs cannot be met any other way, PPE, such as powered air purifying respirator (PAPR) systems may be used to protect workers exposed to manganese-containing fumes and dusts. Even when OSHA requirements are met, companies should consider providing PPE to workers whose exposure levels are above the ACGIH TLV.

Source capture should be used wherever possible to collect manganese-containing fumes as they are generated. The closer to the source fumes can be collected, the less airflow is needed for efficient capture. This significantly reduces equipment and energy costs. The right source capture approach depends on the processes being used as well as factors such as facility layout, the size of the weldments and the use of overhead cranes.

The bottom line for protecting employees includes good engineering controls and industrial hygiene protocols that will protect workers from the dangerous effects of manganese exposure. They will also reduce exposure to other dangerous elements and compounds that are often concurrent with manganese, including nickel, zinc, hexavalent chromium and lead.