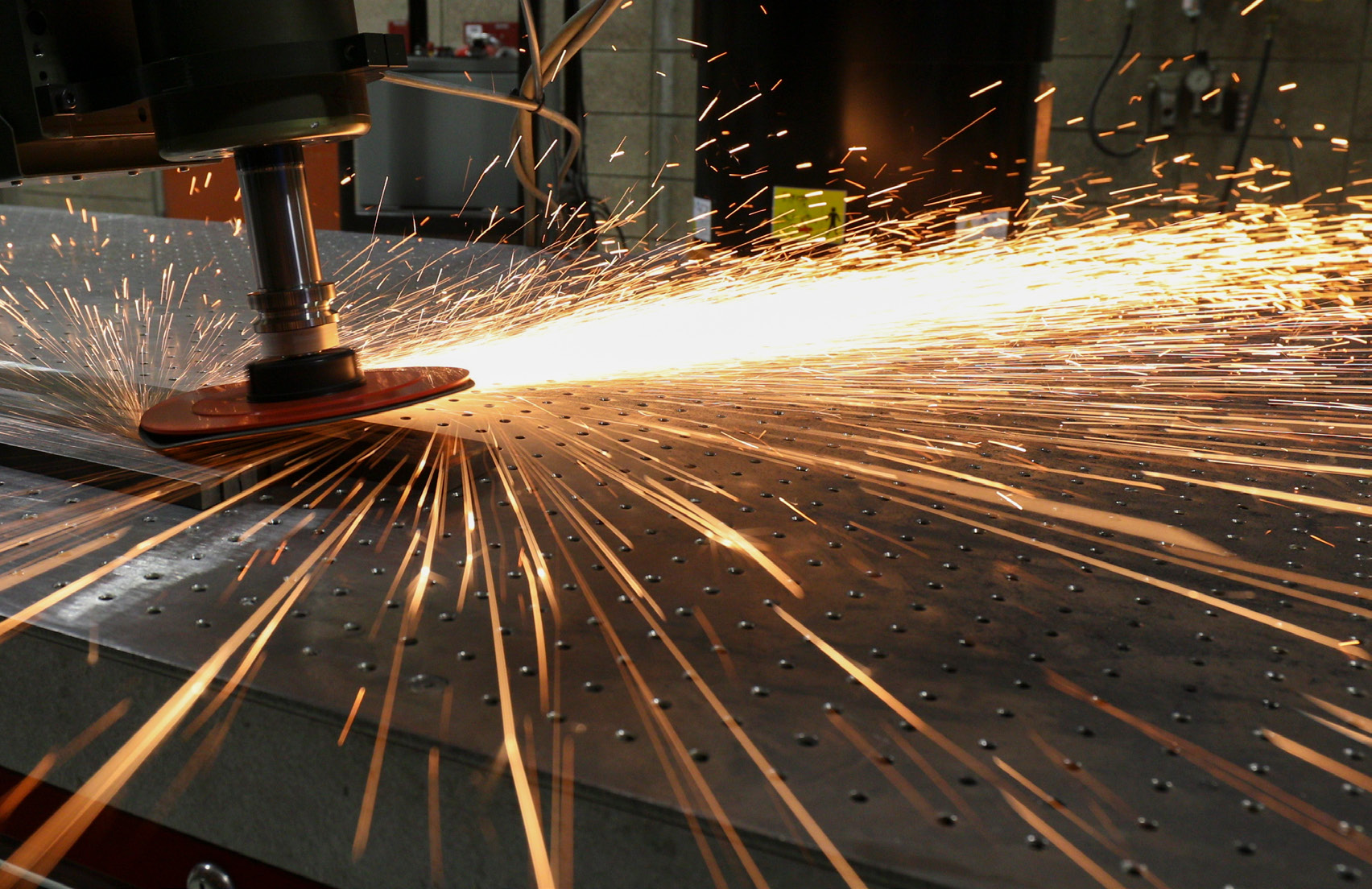 I’ve been to many conferences throughout my career in the metal fabrication industry. But I had never been to one that was so popular that it required an overflow room – until I attended the Robotic Industries Association (RIA) Robotic Grinding and Finishing Conference presented by 3M Co. at its global headquarters in St. Paul, Minn.

With a totally packed house, 3M hosted experienced robotic system integrators, leaders from robotic OEMs, as well as fabricators and manufacturers that have embraced automation on their shop floors. Also in attendance was Scott Barnett, 3M’s applications engineering manager, who I got the opportunity to interview after the event had come to a close.

When asking Barnett about the overriding goal for the conference, he said that the industry is thirsty for support, knowledge and expertise in regard to automating their abrasive operations.

“We’ve consistently heard that people don’t realize how viable it is to automate their abrasive processes,” he continued. “And I think oftentimes, they are working under the assumption that automating an abrasive process would be nearly impossible. So a big focus for the conference was to bring an awareness to the industry that robotic abrasive processing is being done today and is a viable option today. It’s complex, but if you engage the right players in the industry with the experience, you can accomplish great results.”

To Barnett’s point, some attendees had not yet embarked on the automation journey, but were present with hopes of reducing the perceived level of intimidation sometimes attached to robotics. As Barnett mentioned, that was an overriding goal for the event’s organizers – to deliver higher levels of understanding of robotics and automation, to allow more fabricators and manufacturers to realize the productivity and quality enhancements they provide.

To raise the level of familiarity and comfort, conference presenters dug deep into the capabilities that today’s robots offer in grinding and finishing operations. Others shared their automation success stories, and together, they provided clear explanations to otherwise unfamiliar robotic terms and ideas.

“Whether it’s adhesive dispensing, welding, deburring or finishing, a robot can offer a very competitive process,” said Andrew Cook, product manager for grippers at Applied Robotics Inc., a manufacturer of robotic end effectors and other robotic connectivity tools, during his presentation at the conference. “In fact, the deburring and finishing process should be automated. It’s a process that is tedious, repetitive and boring. Any process like that leads to worker distraction, loss of productivity and worker injury.”

Topics and terms discussed at the event included force control, compliance and end effectors like the type developed at Applied Robotics. Overarching ideas, such as how to identify which finishing operations are ripe for automation and how to integrate that automation into pre-existing equipment were also major themes.

Here’s a brief overview of some of the specific terms covered over the two-day conference:
End effectors: An end effector, sometimes referred to as end-of-arm tooling, is essentially any device that can be connected to the end of a robotic arm. In the context of finishing and deburring, end effectors could include the actual finishing or material removal tool, but they could also include grippers that would take a part to a stationary finishing or grinding machine.

Force control: Force control, the technology that gives a robot the ability to control the physical contact between the end effector and the workpiece, dictates the amount of pressure applied to a part. This is particularly significant when working with soft or sensitive materials or parts that require an aesthetically pleasing finish. Force control was developed to avoid situations where too much force is applied to a surface, causing the part to be damaged or the abrasive material to wear through too quickly.

Compliance: Compliance, which is closely tied to force control, is the ability of an object to yield elastically when a force is applied. “In the context of robots and grinding applications, we use the word compliance to indicate the robot’s or the system’s ability to control the force applied to the workpiece,” said Nathan Herbst, abrasives application engineer for robotics at 3M, during his presentation at the conference.

Touchdown: Robotic touchdown is the point in which a robot’s end effector makes contact with the surface of a part. Michael Haas, vice president at FerRobotics Inc., reminded audience members that in several applications, touchdown could be described as the robot gently kissing a part.

Certified integrator: There are many systems integrators in the industry, but not all are certified robotic integrators. More often than not, it’s recommended to seek out an integrator that has been certified by the RIA. In doing so, fabricators can be confident that they are working with trustworthy professionals that have long-standing experience in establishing successful automation systems.

Robotic path: The robotic path is the route the robot’s end effector will take from its standing still location throughout the completion of the job it’s been programmed to do. Remember, however, that path accuracy, the difference between the commanded path and the actual path, will affect the overall outcome of the job at hand.

Vision systems: Vision systems include specially developed cameras and software that are often integrated into industrial operations for quality control purposes. In the context of automated grinding operations, vision systems are useful to assist the robot in properly locating its starting position, and they’re relied upon in material handling, such as picking a part from a bin or conveyor belt to be brought to the finishing tool.

Fixturing: In addition to investing in the actual robotic system, those looking to automate an operation will often need to invest in the associated fixturing. Fixturing is the customized device that is designed to support a workpiece during an automated process.

“In the context of robots and grinding applications, we use the word compliance to indicate the robot’s or the system’s ability to control the force applied to the workpiece.”
Nathan Herbst, abrasives application engineer for robotics, 3M

While talk of the actual robots often took center stage during the conference, the role of abrasives in automated grinding and finishing operations was not undercut. Jim Bauman, executive vice president of 3M’s industrial business group, who delivered the conference’s opening remarks, reminded attendees of 3M’s role in the world of abrasives. “3M has been a leader in abrasives for more than 100 years – it’s the cornerstone of the company,” he said.

3M actually began in 1902 as a mining company looking for minerals that could be used for making sandpaper and grinding wheels. It would be another 80 years before Post-It Notes hit the market. In the 1920s, 3M invented waterproof sandpaper and Scotch tape. In the 1930s, clear tape hit the market, which was followed by Scotchgard products in the 1950s. A 3M-developed synthetic rubber even found its way onto the space shuttle in 1969 for the first moon landing.

Throughout the conference, attendees were reminded of the innovations 3M has presented to the world, many of which find their home in industrial settings. As evidenced by the large size of the company’s industrial abrasives and finishing offerings, industrial solutions are – and always have been – a major focus at 3M. From abrasive belts, brushes, discs and wheels to power tools and specialty abrasives, the company offers its customers hundreds of products designed to help save them time and money in all of their abrasive and finishing operations.

According to Barnett, 3M’s focus and commitment on helping customers automate their abrasive operations was a big part of the company’s past and will continue to be so long into the future. In fact, 3M has been involved in helping its customers automate with robotics for more than 30 years. As just one example, the company established a robotic laboratory for abrasive processing on its campus more than 30 years ago.

“Within the past couple of years, we’ve seen the industry increasingly heading in this direction, and we feel that with an added emphasis on our position in this space, we can help the industry achieve the results it wants to see with robotics,” Barnett said. “We understand the abrasive process, and through many years of robots using abrasives and also humans using abrasives, we understand the many complexities involved and the optimum way to process parts.

“Matching the process with the right abrasive and the right accessories to fit the needs of the customer is where 3M can bring a lot to the table,” he concluded. “3M’s technology and domain knowledge along with solutions that are ideally suited for robotics puts us in a great position to help our customers. At the end of the day, it’s about much more than recommending an abrasive. It’s about all of the other variables that are involved and helping our customer leverage the abrasive in the most effective way possible.”