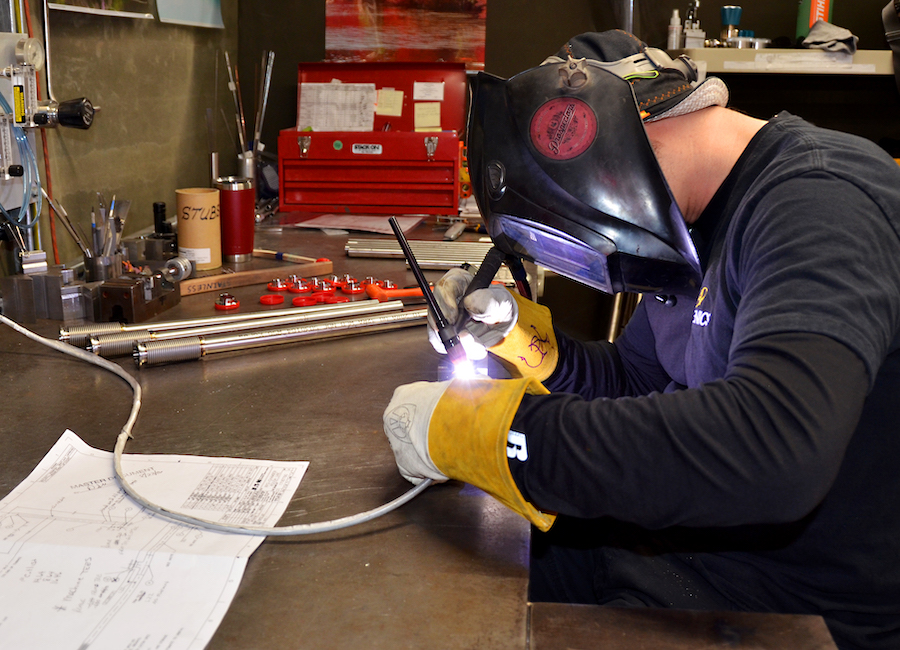 During the welding process, stainless steel and other corrosion-resistant metals are extremely sensitive to the presence of hydrogen, air, water and oxygen in the atmosphere. Those elements can penetrate and contaminate a weld, rendering it imperfect – or worse. That’s why welders often use a shielding gas that envelops the space around the weld job, in order to defend it from those other elements.

TIG welding results in some of the most highly accurate, repeatable and refined weldments achievable. It is also one of the most challenging types of welding to master due to the intricate nature of creating miniscule, precise, clean welds.

Many TIG welders, including the team at Axenics, prefer pure argon as a shielding gas. And there are several reasons behind their preference. For starters, argon is universal and readily available. It’s the third most prominent gas in the atmosphere with nitrogen and oxygen being the top two. It can also be used to weld on a variety of metals, including stainless steel, aluminum, copper, Inconel and other alloys.

A big reason for using pure argon is that it lowers the risk of exposure of the molten weld pool to the oxygen, nitrogen and hydrogen that are present in the outside atmosphere. Those elements creeping into the weld space jeopardize welds by causing holes in the bead or spattering of the weld pool.

“Argon doesn’t interact with molten metal as much as other gases can,” says Ernest Coolong, a journeyperson welder at Axenics, a New England contract manufacturer that TIG welds stainless steel.

Argon also provides a smooth, stable arc. It envelops and stabilizes the electrical current of the TIG welding torch to keep the metals from becoming oxidized. Furthermore, it assists in the clean finish of weldments. A TIG weld using argon is obvious, as the weld has a bright and shiny appearance. This can be beneficial to manufacturers as there is little need for brushing and polishing of the weld.

Finally, pure argon is affordable. Some mixtures of shielding gases, such as argon mixed with nitrogen or argon mixed with helium, are often pricier options as there’s lower demand for them.

Obviously, there are several reasons to choose argon as a shielding gas, but there are best practices to keep in mind when using it. As an example, too much or too little shielding gas can cause weld flaws. TIG welding torch gas flow settings are generally in the 10 to 35 cfm range.

“It’s essential to keep the regular outside atmosphere out of the weld atmosphere,” Coolong says. “You don’t want oxygen interacting with the weld surface or the filler metal. If you use too much argon, it can cause cavitation of the weld. Too much actually pushes so much gas forward, it will suck the outside atmosphere into the shielding gas.”

One tactic Coolong uses for autonomous welding is adjusting the back pressure. Depending on the interior diameter of the metal tubing, he adjusts the flow rate of the gas that flows inside the metal. The smaller the diameter, the higher the flow rate needs to be to prevent oxidation on the inside of the tube. The gas also acts as flow for the molten pool to sit on, holding the pool aloft while welding the two pieces of metal together.

“Too much gas allows the pool to puff up and with too little gas, it can sink in,” he says. “It can be tricky to get that balance depending on the wall thickness of the metal.”

Some trial and error comes into play, so if there’s a diameter Coolong has not welded in some time, he uses a couple of scrap pieces to test and determine the right flow rate before he proceeds with the job at hand.

Argon makes up about 0.93 percent of the atmosphere – what people breathe – according to NASA. There is such a thing as argon-related fatigue, though Coolong says there’s not much risk to health in using argon, depending on a few factors.

After welding all day with argon – it literally blows into the face of a masked welder – some welders may begin to feel lethargic because they’re not getting as much oxygen as the body is used to or needs. If a welder feels run down, it’s a good idea to take a break, walk around or even go outdoors away from the workspace to get some fresh air.

Argon is heavier than the air in the environment, and when it’s released, it disperses down near the floor. In a larger shop with people coming and going through doors, generally there isn’t concern if there is proper air ventilation. No one should weld with pure argon in a sealed environment.

Depending on the delivery system used, some argon comes in compressed cylinders in different sizes. They should be secured in an upright position. The high-pressure valves on top of the cylinders are double seated, so the welder needs to open and close them completely when using.

Axenics uses a dewar system, which involves vacuum flasks filled with liquid argon, because they use a large quantity of pure argon on a regular basis. Only trained team

The welder can tell the argon is getting low on the high-pressure canisters because the high-pressure gauge drops down to zero once the pressure in the cylinder nears empty. The dewar also has a gauge, similar to a propane tank, though it can be less reliable, Coolong says. If the dewar is able to be easily shifted or slightly rocked, it’s near empty. Axenics uses a distribution system that shows the working pressure of argon, and they generally have a backup per tank available.

A welding torch can affect the shielding gas, as well.

“Regular torch maintenance and machine maintenance is very important,” Coolong says. “All seals and O-rings on the torch need to be in good condition. Any cracks or areas not tightened properly can suck the outside atmosphere through the back of the torch, producing a poor weld. All hose connections to the torch and machine need to be secure as well as they can cause the atmosphere to enter into the weld area.”

One other thing to note is torch angle. For example, going from 90 to 30 degrees really pushes forward on the tungsten in the torch and can cause the outside atmosphere to come into the weld area. It’s recommended to keep the torch between 45 and 90 degrees so that doesn’t occur.

Again, impurities in the outside atmosphere can combine with a weld pool to cause defects in the weld such as cracks, reduced corrosion resistance, carbide precipitation and brittleness. Weld speed is generally not a factor, as it’s extremely unlikely that someone welds so fast that they would outpace the release of the argon.

While there are many factors at play, the moral of the story is to keep the outside atmosphere out of the weld atmosphere. For welders that do this, using pure argon in TIG welding is going to produce some of the finest welds they’ve ever achieved.