Laser marking was once a technology that received push-back from the aerospace industry for being too damaging on parts with strict damage irregularity standards. Today, however, it is becoming widely used in aerospace parts manufacturing thanks to advancing technologies.

In the past, CO2 and Nd:YAG lasers dominated the laser marking, cutting and welding of industrial tooling and manufactured goods. These lasers were the first to be brought into the industrial marketplace and were quite useful for high-power applications on durable materials. However, they were found to be too damaging when used for marking on the more delicate, strictly regulated and critical components used in aerospace parts manufacturing.

Components are strongest when forces are distributed evenly. However, when the first marking lasers came out, they were made for high-power applications with little flexibility on beam control.

When forces are not distributed evenly, a specific region cannot take on too much energy. This reduction in surface area resulted in cracking and led to critical components being destroyed. 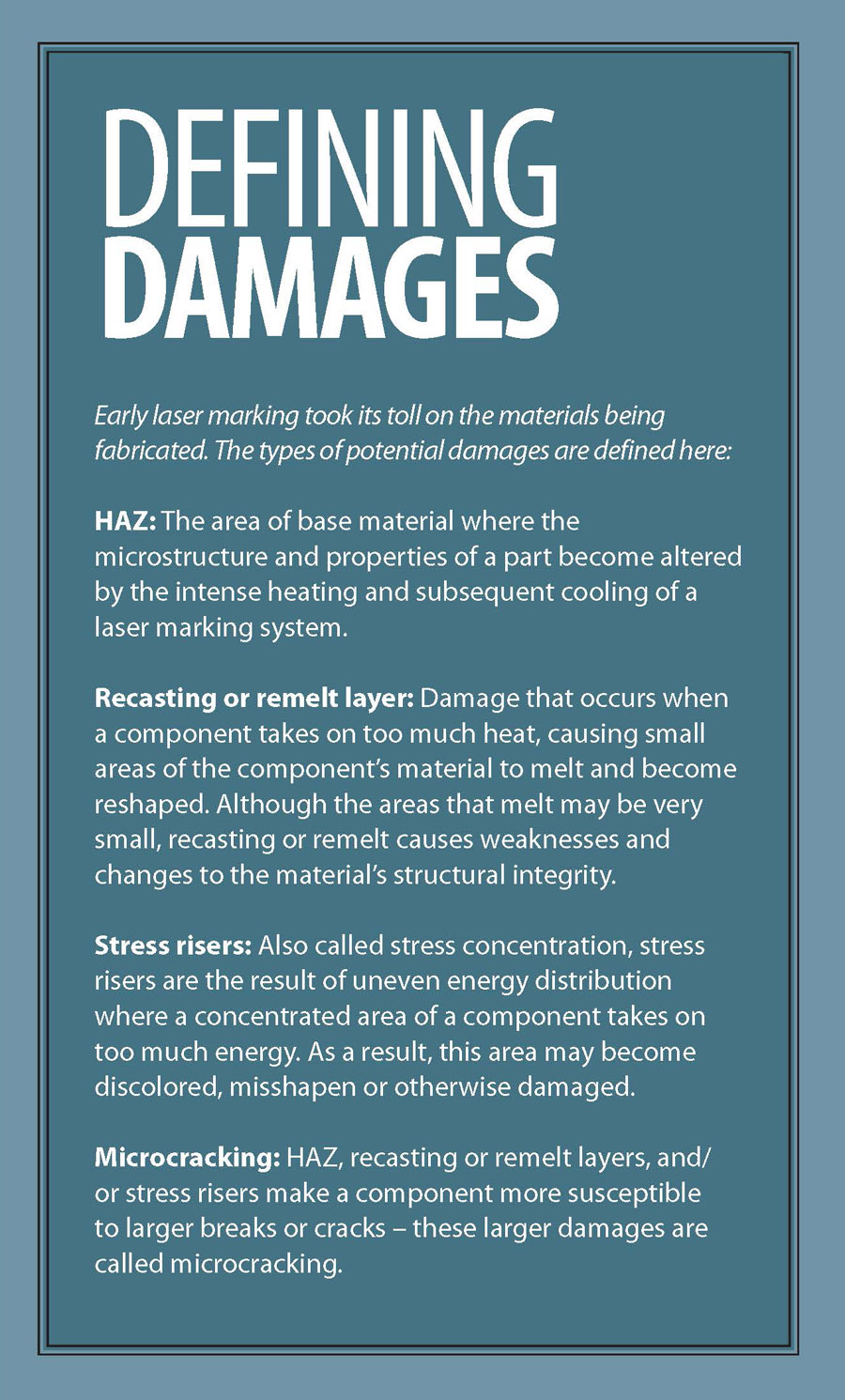 Alternative marking methods to laser marking include dot peen, chemical/acid etching and inkjet printing. Each of these methods requires continuous maintenance and consumables while not offering the same benefits that laser marking does.

Dot peen is fast, but it utilizes impact marking that causes microcracking and stress risers. Its capabilities are limited to marking only basic alphanumerics and low-grade 2-D data matrices.

Chemical/acid etching requires the disposal of the chemicals after use and also requires replacement stencils after 20 to 30 markings. If serialization is required, a different stencil needs to be made each time, resulting in inconsistent marking and increasing the reject rate on finished parts.

Inkjet systems, which are fast and offer the full RGB or CMYK color swatches, require consumable inks and daily maintenance, and the ink must be seared on afterward to ensure permanence. In time, these markings fade out or, in some cases, completely disappear. 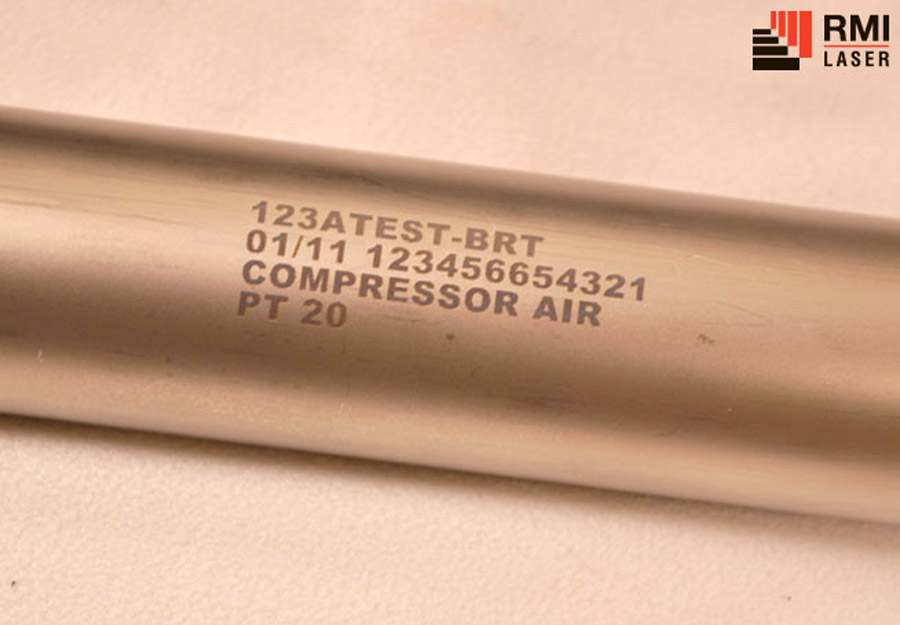 Nd: YAG has mostly been phased out as the Nd: YVO4 laser marking systems offer longer life cycles for the crystal and the diode, while also offering precision controls and the marking quality needed for direct part marking.

The fiber laser market has grown substantially in recent years for various marking applications. However, these systems have limitations when marking sensitive components without any surface degradation, like aerospace applications. These issues as well as other specific requirements for aerospace parts have kept fiber laser marking systems from becoming widely adopted as a mainstream solution. 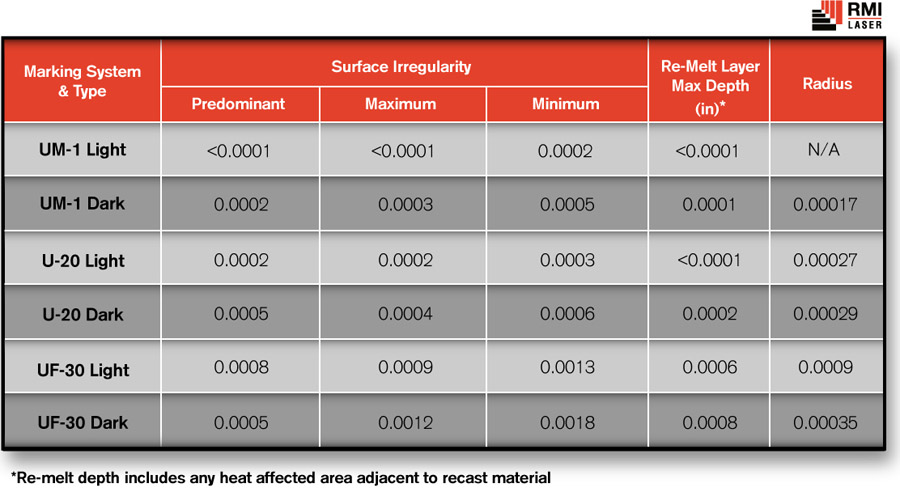 These markings were performed on 1-in. titanium airline fuel tubes, chosen because they have strict standards for surface irregularities. Due to these strict standards, the aerospace parts manufacturer decided against utilizing lasers for marking in their existing assembly automation processes.

The next step during the testing process was to put the marked sample tubes through Impulse Cycling Testing or Impulse Fatigue Testing as this is the primary environmental test to ensure that markings will not cause any of the common defect issues. The testing complies with SAE Aerospace Standard AS603B, Revised 2009-02; ANSI NCSL Z540-1 specification; and ISO 17025:2005 specification.

Because the UF-30 did not pass the original tests and the UM-1 is not fast enough to meet most of the cycle times needed for automation, the U-20 was the only system tested for this second process. Tubes were marked with a 12-digit part number, date code, 10-digit serial number and the pressure rating of the tube.

The test itself was for 200,000 cycles, which replicates the life of a typical fuel line. It was completed without any failures. Thus, the U-20 laser marking system was capable of performing high-contrast and high-speed markings without concern for HAZ, recasting or remelt layers, stress risers or microcracking. 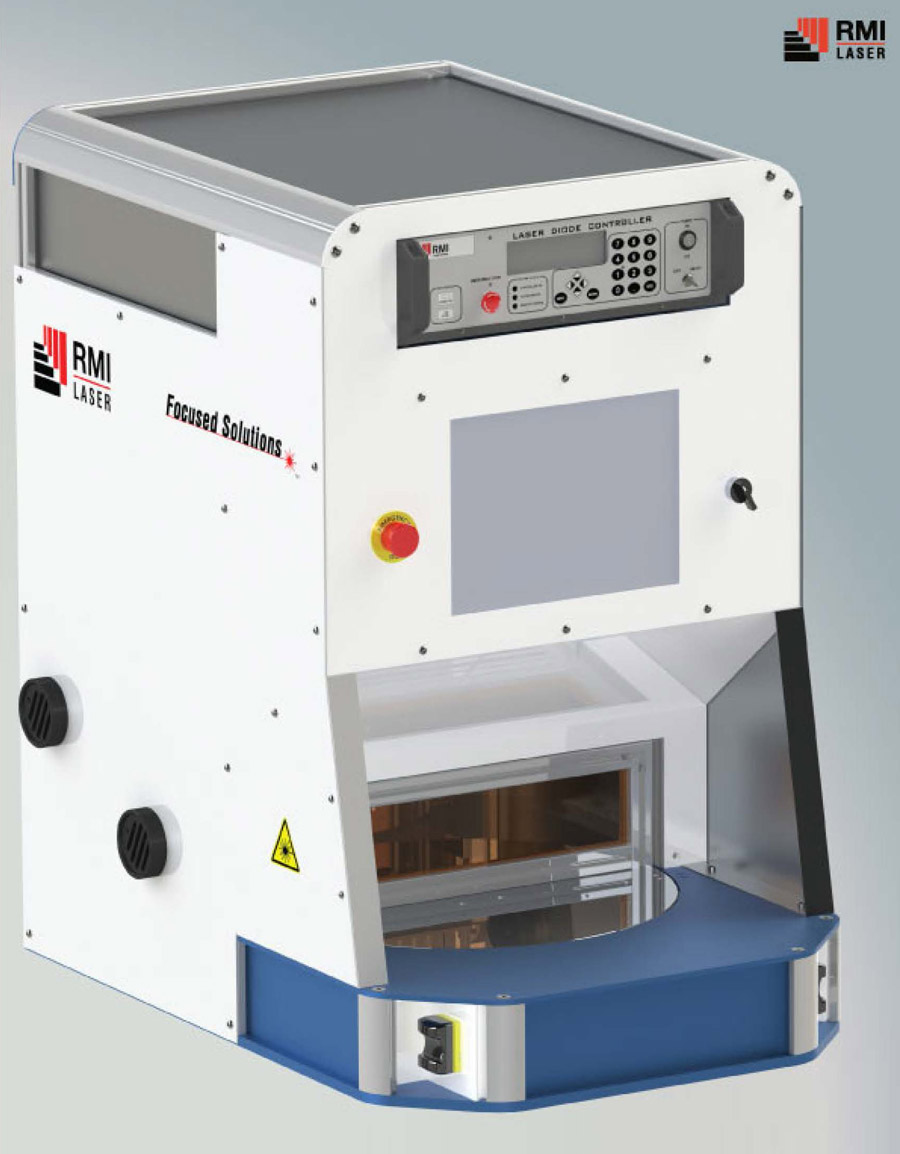 Early laser marking resulted in various damages on delicate components. Today, however, laser marking is possible on sensitive aerospace components or parts that require markings without surface degradation with equipment like RMI Laser’s U-20 laser marking system in a Class 1 rotary table enclosure.

The results are in

The test results show that the UF-30 fiber laser causes the most surface irregularities and the largest amount of remelt or recasting layer. The numbers are nearly twice that of the UM-1 Nd: YAG and the U-20 Nd: YVO4 laser marking systems.

The conclusion here is that the UF-30 fiber laser, whether marking lightly and fast or harder and slow, still causes too much surface degradation in the form of HAZ and recasting or remelt layers.

The UM-1 and U-20 are very similar in spite of the difference of 19 watts of output power. It can now be determined that wattage is not the key factor for causing this surface damage. The major factor here is the pulse duration of these units – the amount of time it takes from the beginning of the laser pulse to the very end of the pulse.

The UM-1 and U-20 have pulse durations of 8 ns. The UF-30, and fiber lasers in general, have pulse durations of 100 ns – more than 10 times that of the other two units being tested. This means that each and every pulse sits on the part 10 times longer and that excessive heat is what is causing the surface irregularities and degradation to be more severe.

Overall, the results of the testing indicate that laser marking systems are, in fact, capable of performing markings on sensitive aerospace components or parts that require markings without surface degradation.

It’s key to remember, however, that not all laser marking technologies are ideal for such applications and caution must be used when deciding what type of marking system to use.
When comparing laser marking to other marking methods, lasers really do stand out.

There are no consumables or disposal involved and it comes at a lower cost of ownership. Laser marking systems require little maintenance, are digitally driven and are easy to automate and integrate. Even more so, they provide precision marking control, marking versatility and reduced cycle times.