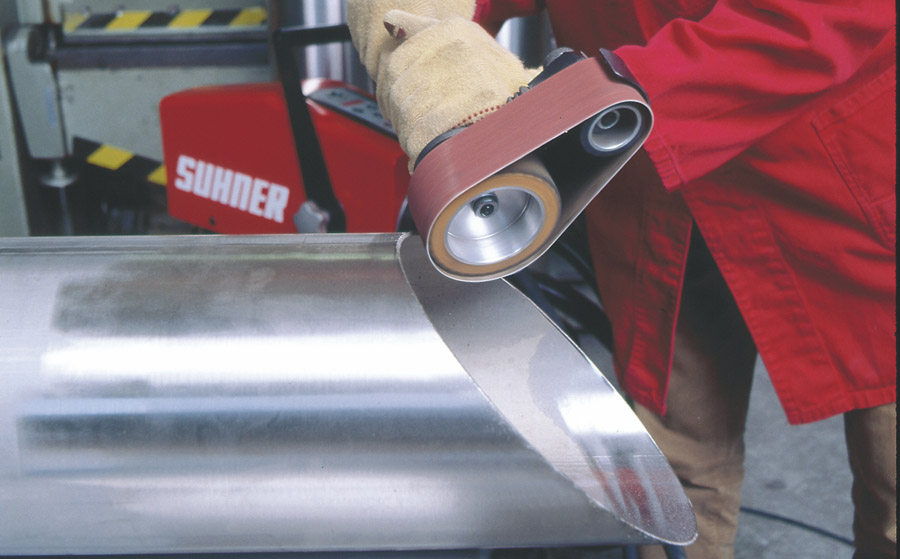 Accurate and flexible speed control is important when working with a variety of abrasive wheels and attachments.

Electric grinders are heavy, cumbersome and tough to fit into tight corners. Their air-operated counterparts are noisy and expensive to run. Both offer limited speed ranges, making them either too darned slow or way too fast for some applications. Further, a typical fabricating shop needs an assortment of right-angle and straight grinders and cabinets filled with various wheel sizes, shapes and grits.

This drives up costs, decreases available storage and working space, and hurts shop floor efficiency. It can even be dangerous, as production-minded employees will grab whatever tool is available, quite possibly spinning a grinding disc rated for 7,000 rpm to speeds of 10,000 rpm or greater. Simply put, this most low-tech part of welding and fabricating is often the biggest hassle. Surely there’s a better way. 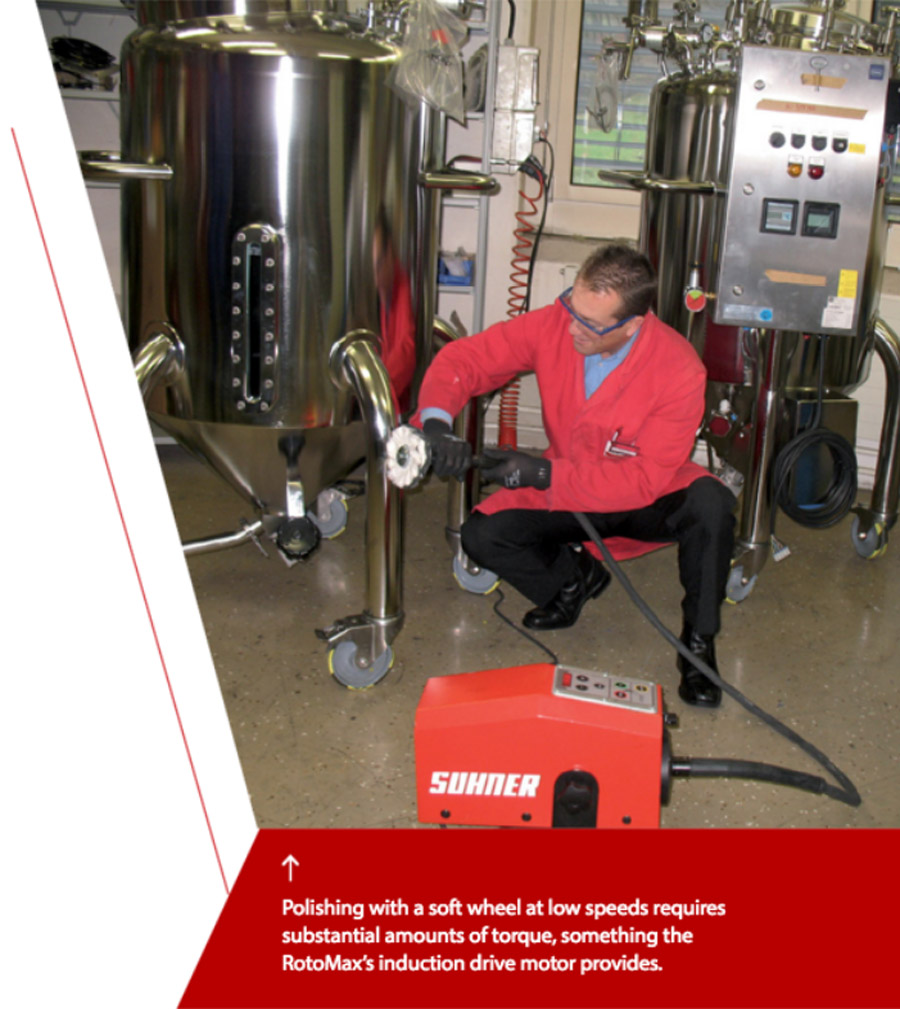 Roger Edelman has found it in Suhner’s RotoMax, a handheld grinder with a flexible shaft that works with interchangeable pieces, allowing the user to perform a variety of machining operations with a single machine. The manager of fabricating and welding at industrial equipment supplier Wenger Mfg. Inc. says he moved away from air grinders several years ago and hasn’t looked back.

“I needed something with variable speed,” Edelman says. “Also, the air grinders we were using ran at 25,000 rpm and were noisy. It was a safety issue for us. So we decided to give the RotoMax a try.”

If you’ve bought a bag of dog food lately, you’ve more than likely touched a Wenger product, albeit indirectly. That’s because the company manufactures most of the extrusion and drying machines used to produce pet foods and treats. In an interesting side note, the Wenger brothers were, in fact, the first to develop pelletized feedstuffs more than 75 years ago.

Wenger’s systems also make treats for humans, including corn puffs, dried veggies and pasta,as well as biodegradable packing materials and other industrial products. In addition to its Sabetha, Kan., location, Wenger also has an additional plant in Brazil and sales offices in Belgium, Taiwan and China.

Today, the Wenger plant uses three RotoMax flexible shaft grinders. Edelman’s team uses them to deburr laser cut sheet metal parts. When the department used air grinders, he was concerned about his employees running at higher speeds than recommended for the abrasive media, but he knew they had to do so to achieve the necessary torque. That situation no longer exists.

“The variable speed of the RotoMax lets us dial in a much lower speed without losing any power,” he says. “The polishing wheel doesn’t get nearly as hot, so it lasts longer and does a better job, and there are no worries over it blowing apart. It’s just a better solution for us.”

The variable speed of the RotoMax also helps fine-tune the abrasive action; not only does it cut better, but there’s less time wasted switching to a different grit or wheel size.

Edelman says consumable costs have decreased as a result. The array of interchangeable attachments has also helped with throughput, as it’s easy to pop on whatever end is needed for the task at hand.

This is part of the reason Wenger recently ordered seven more RotoMax units for its grinding department. They will replace the electric grinders currently used to grind and polish the screws on its food processing equipment.

“One of the biggest complaints from the grinding department is the weight of the equipment,” Edelman points out. “They run 10 hours a day on that side, so they wanted something both quieter and easier to handle, but with enough power for heavy grinding. The RotoMax does both.” 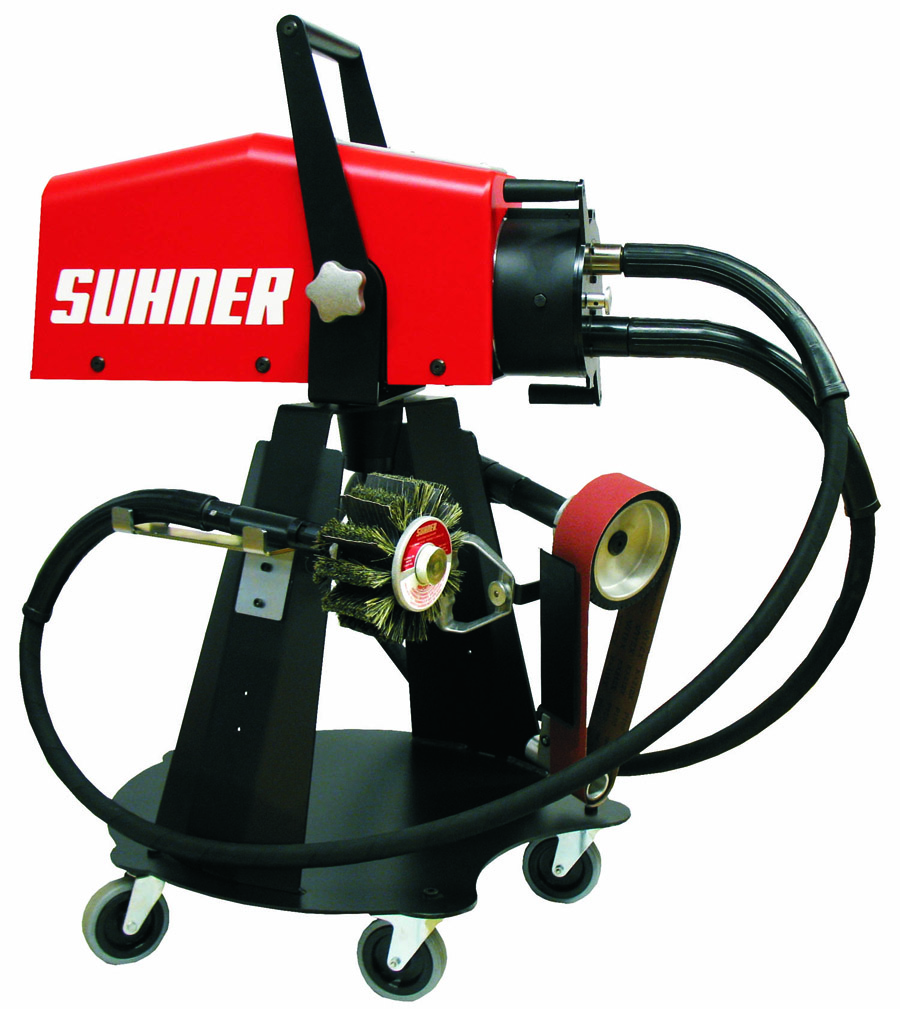 The RotoMax is available in foot, trolley or suspended mount configurations.

From forge to fabricator

Another company with a long history is Hammond Machine Works Inc. Project management and sales associate Amos Sullivan says the 108-year-old company was originally a forge shop that also offered machining and fabrication services. But by the time Mike Nau purchased the company in the 1960s, the forge was cold. He dropped it from the company name and focused on expanding Hammond’s machining and fabrication capabilities.

Those capabilities were further expanded when Nau’s son Pete purchased the company in 1992 and added CNC machinery to its extensive equipment list. Today, Hammond offers an array of machining and fabrication services for the railcar, steel mill and energy industries. It has been a Suhner customer for the past 20 years.

“Before buying the RotoMax, we used the previous-generation flexible shaft grinder, the Rotar,” Sullivan says. “It’s a workhorse, and we still use it around the shop, but we were limited by the speed settings. That’s why we bought a RotoMax early last year and a second one just two months ago.

“Aside from the greater power and flexibility, it has a digital readout that lets you sneak up onto the optimal abrasive speed – with a 7-in. flap wheel that has a maximum of 8,500 rpm, for example, you can dial it in to 8,400. This gives you the best use of your consumables.”

Hammond’s primary use of the RotoMax is for grinding large weldments, one of which has roughly 15 ft. of weld bead that must be smooth and flush when complete. Sullivan says he appreciates the increased throughput on this job especially, although the RotoMax is versatile enough to be used anywhere in the shop.

“There are all sorts of attachments for the thing,” he says. “It’s a really awesome machine.” 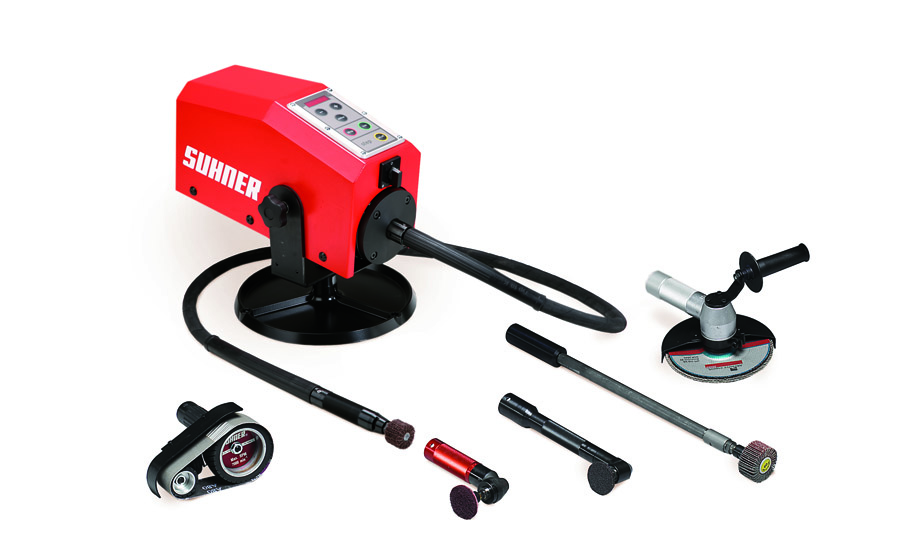 Need an angle head? How about a disc grinder, or an extension to reach deep into a cabinet? It’s not a problem with the RotoMax.

Matthew Day Perez is the material specialist for Dustin Yellin, and art studio in Brooklyn, N.Y., who uses four RotoMax grinders for his work. Perez also uses a RotoMax for his own projects.

“I grind mostly soda lime glass,” he says. “There are times when I need to remove lots of material, so I’ll put on a Tornado pad, crank it up to 10,000 rpm and start hogging. Other times, I need to do very fine polishing with a felt or electrostatic pad. The RotoMax can handle whatever I throw at it.”

Perez has been working with glass since he was a kid, when he stumbled into a shop selling stained glass. Since then he’s earned a BFA degree from Illinois State University, followed by an MFA from the Rhode Island School of Design. He’s received numerous awards for his work and participated in exhibitions throughout the United States, Asia and New Zealand.

He first learned of the RotoMax while on a Fulbright scholarship studying under Richard Whiteley in Australia. He’s been using it ever since.

“It feels very comfortable in your hand,” Perez says. “I’ve tried electric grinders, but because I need to use a water feed to keep the glass cool, I’d get these little shocks, due to the proximity of the water and electricity.

“And you can’t use heavy roughing pads on them. They burn out too fast. It’s the same with polishing – you put any kind of pressure, which is one of the requirements for polishing, on one of those little air grinders and you’ll kill it in about an hour. But with the RotoMax, you can put your entire body weight into it and it won’t slow at all, even down around 500 rpm. The torque is amazing.”

Perez is currently preparing for several shows, including one in New York, and also developing a large wall work for the Bellevue Arts Museum in Washington. “The RotoMax will be a big help to me, sanding and grinding all those panels flush and flat.” 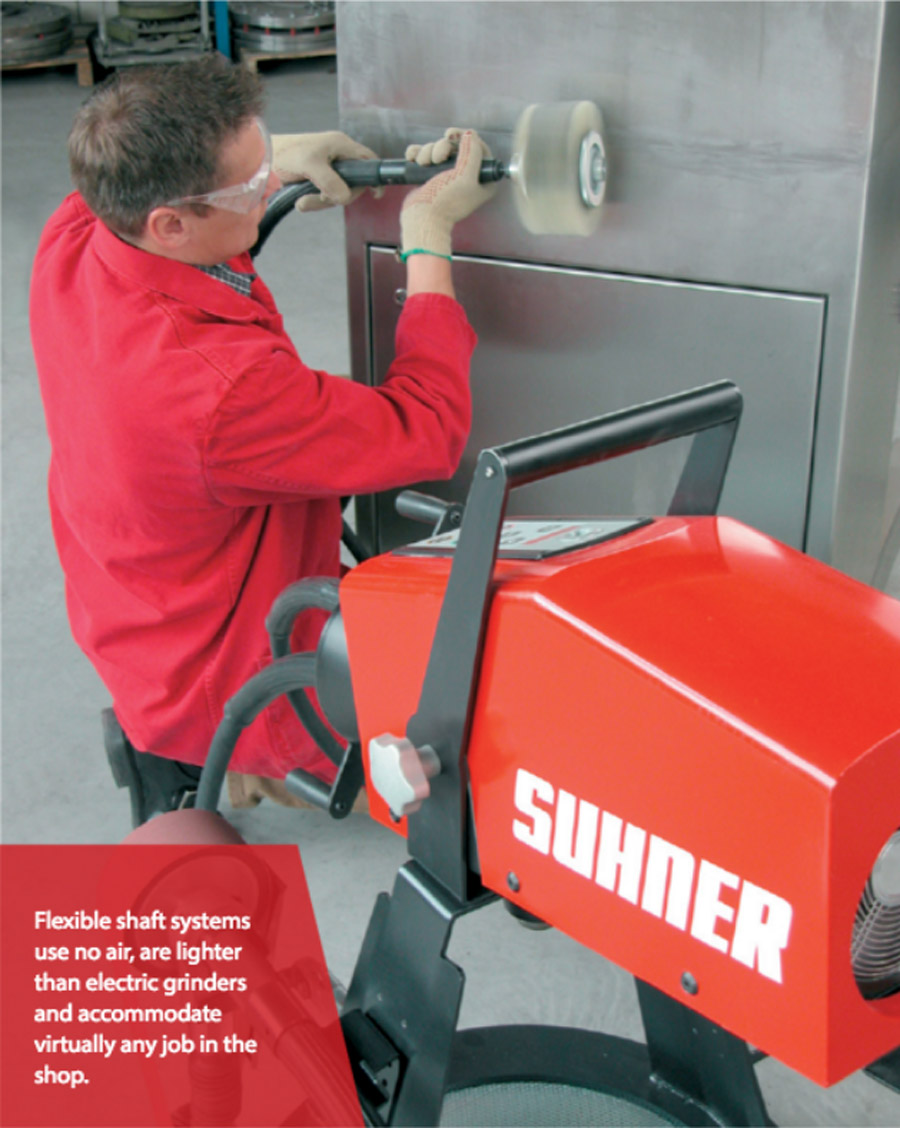 If you’re contemplating an exit plan from traditional air or electric handheld grinders, Aaron Beck, director of sales and marketing for Suhner Industrial Products LLC says the RotoMax is available in two models.

Both are adjustable in 100-rpm increments, have a “soft start” drive mechanism with integrated brake and can be equipped with a foot, trolley or suspended mount. 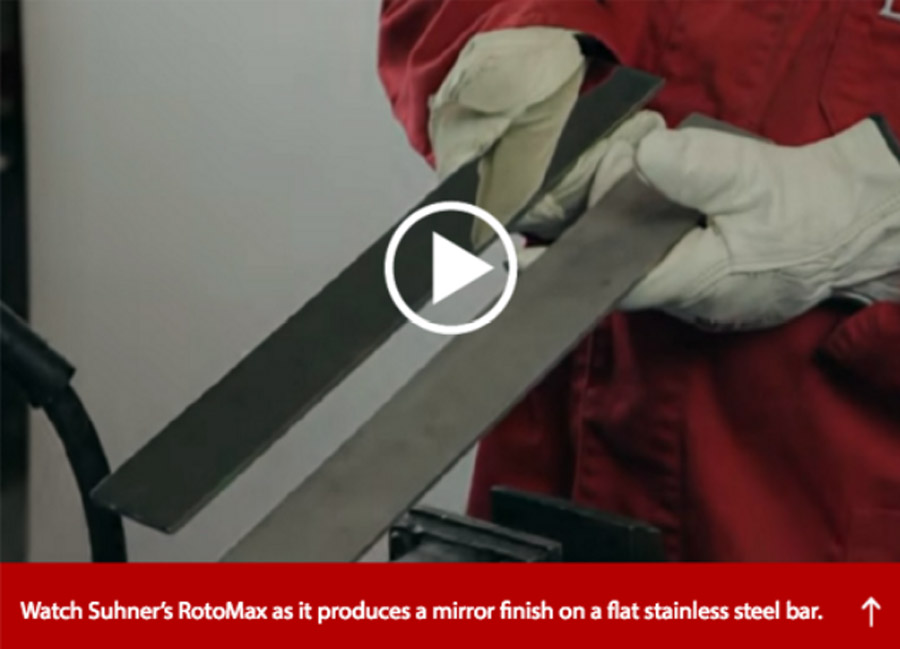 “Don’t get me wrong,” he says. “We sell air and electric grinders, and they definitely have their place. But a flexible shaft system provides excellent torque-to-power ratios, is lightweight and easy to handle, and it gives you the exact speed needed for whatever abrasive you’re running. This makes them last longer and cut more efficiently.

“We find that most of our customers reduce their consumable costs by 20 percent or more after moving to a RotoMax,” he continues. “It uses an induction motor, so there are no brushes to burn out as there are with electric grinders. It’s quiet, and it doesn’t use expensive shop air. But the best thing is its versatility. Sanding, grinding, deburring, polishing: any job you can think of, this machine can do. So with one device, you can literally replace 10 different tools in your shop. It’s just been a really good product for us.”