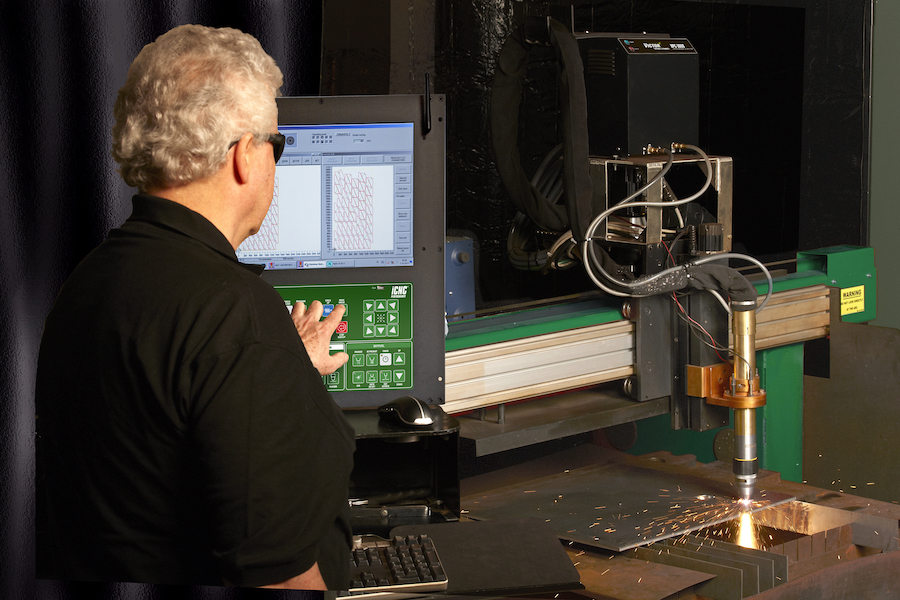 Fab shops transition from manual to automated plasma cutting for a variety of reasons. Some make the switch so that they can bid more competitively, others look to lower their cost per foot cut. Some are aiming to boost productivity and others want to increase quality and reduce stress by meeting deadlines faster, especially when it comes to cutting repeatable shapes. But when it comes down to it, most fab shops need to accomplish all of these objectives.

No matter the reasons for switching to automated cutting, there are factors that everyone must consider to be successful in the move. Every component of an integrated system matters, but the two biggest decisions are selecting the correct plasma power source and system controller.

Air plasma units use a single gas, shop air, for the plasma gas and to cool the torch. However, when cutting carbon steel, some of the nitrogen in the air becomes absorbed into the cut surface, which then requires grinding before welding to eliminate porosity and the risk of nitrides (harder-than-steel elements) at the grain boundary. As for precision, an air plasma cut on 1/2-in.-thick steel at 100 amps would have a kerf (or cut width) of 0.1 in.

The air-cooled torches used with air plasma systems can cut at a maximum of 125 amps. However, shops that initially purchased a 125-amp air plasma system for cutting at this output and with a higher arc-on time almost invariably wish they had gone to a dual-gas system with a water-cooled torch because the consumables last up to four times longer and the heat won’t destroy the torch head.

To adapt a manual plasma cutter for automation, some companies offer mechanized torch kits that feature the necessary electrical connection and a torch for mechanized use. There are also air plasma systems designed for mechanized cutting out of the box, and these feature a CNC interface. Air plasma systems are lightweight for shop and field portability, and they are the most affordable. 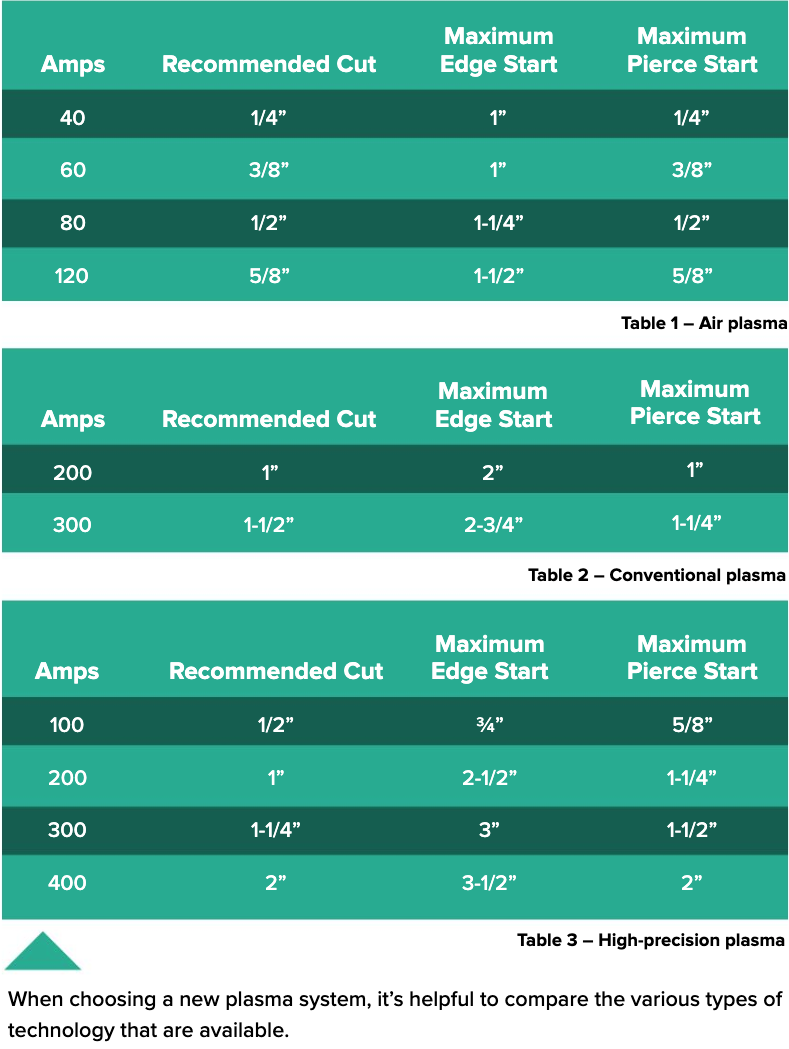 Conventional systems also feature built-in plasma and shielding gas controls as well as offer the ability to use air, oxygen, nitrogen or argon/helium as the plasma gas and air or nitrogen as the shielding gas. Dual-gas systems constrict the arc, increase precision and deliver a kerf width of about 0.095 in. when cutting 1/2-in.-thick steel at 100 amps. For cutting mild steel, using oxygen as the plasma gas reduces nitride formation, creating a weld-ready cut surface. Note, however, that some codes and procedures specify mechanically finishing a plasma or flame cut surface.

High-precision plasma systems use dual-gas, water-cooled torches for cutting at up to 400 amps. The system components – and especially the torch – greatly constrict arc density and arc force, controlling the high-speed plasma gases with temperatures up to 40,000 degrees F. Their consumables last even longer than conventional plasma – perhaps 2,000 or more arc starts per consumables set on 1/2-in.-thick mild steel compared to 1,200 for conventional plasma and a few hundred for air plasma.

Continuing the kerf example, a high-precision cut on 1/2-in.-thick steel at 100 amps yields a kerf of 0.091 in. and a cut accuracy of ±0.01 in. to 0.05 in. Further, a part can go straight to welding or to the next fabrication step with little or no additional edge preparation because the cut will have a smooth cut surface with nearly vertical drag lines, a square cut face with a bevel angle of 0 to 3 degrees, minimal top edge rounding, little to no top spatter or bottom dross, no nitride contamination and good mechanical properties in welded components.

The “size” of the plasma system depends on the desired cut quality, cutting speed, material thickness, piercing capabilities and duty cycle. A “recommended cut” capacity equates to the thickness a system can cut while producing a smooth cut surface. The system can cut thicker material, but the cut surface will be rougher and require more finishing; manufacturers use the term “sever cut” to describe this.

Tables 1, 2 and 3 provide guidance for choosing a plasma system with parameters noted for mild steel. Note that amperages vary slightly by manufacturer.

Thermal Dynamics Automation understands that shops always have to weigh system output versus cost. The company, therefore, addressed concerns related to “under-buying” in their high-precision Ultra-Cut XT series with StepUp modular technology. Shops can increase the output of a 100-amp system into a 200-, 300- or 400-amp system by adding inverter blocks, and a field technician can install an inverter block in less than one hour.

One of the key capabilities of a high-end controller is that it improves cut quality of the cut surface and reduces dross formation by controlling the plasma and shielding gases, distance between the torch and the plate, cutting speed and current. Adjusting similar factors on the fly – especially when cutting corners, radii and shapes – requires knowing what all components of the cutting system are doing at any given moment.

By building enough intelligence into the CNC, it can give instructions to the components of the system in real time and in such a way that the complete system can work in harmony. Achieving this level of sophistication requires thousands of hours of development with known, thoroughly tested components.

Of course, fewer shops today employ table operators with decades of experience, so controller manufacturers such as Thermal Dynamics build intelligence into the plasma system, such as the iCNC Performance controller. The most obvious way intelligence manifests itself is through the ability for the operator to select “best quality cut” or “lowest cost cut” options. With the click of a mouse or touch of a screen, the system automatically sets and adjusts parameters for all of the cutting variables.

Most controllers have optional software packages with tools that further optimize shop productivity. These tools include:

Because first-time buyers and smaller fab shops can be extremely price sensitive, they may be tempted to save money by using an entry-level controller, which usually consists of a PC loaded with CAD/CAM software and cutting controls. However, standard PCs aren’t designed for industrial environments. Dirt and metal grinding dust aside, the high frequency used by some plasma cutters and welding systems to start or maintain the arc notoriously interferes with electronic controls.

For example, an aircraft maintenance operation using such a controller had it fault as a result of TIG welding – even though the TIG welder was located three buildings away.

The next problem with PCs comes with Windows 10, a personal computer operating system bloated with hundreds of routines running in the background. While these routines protect consumers, they are also the cause of a frozen mouse or “blue screen of death” crash. While that might be annoying in the middle of working on a spreadsheet, it could ruin a plate for a fab shop and cause lost productivity. In short, saving money upfront can end up costing more in the long run. 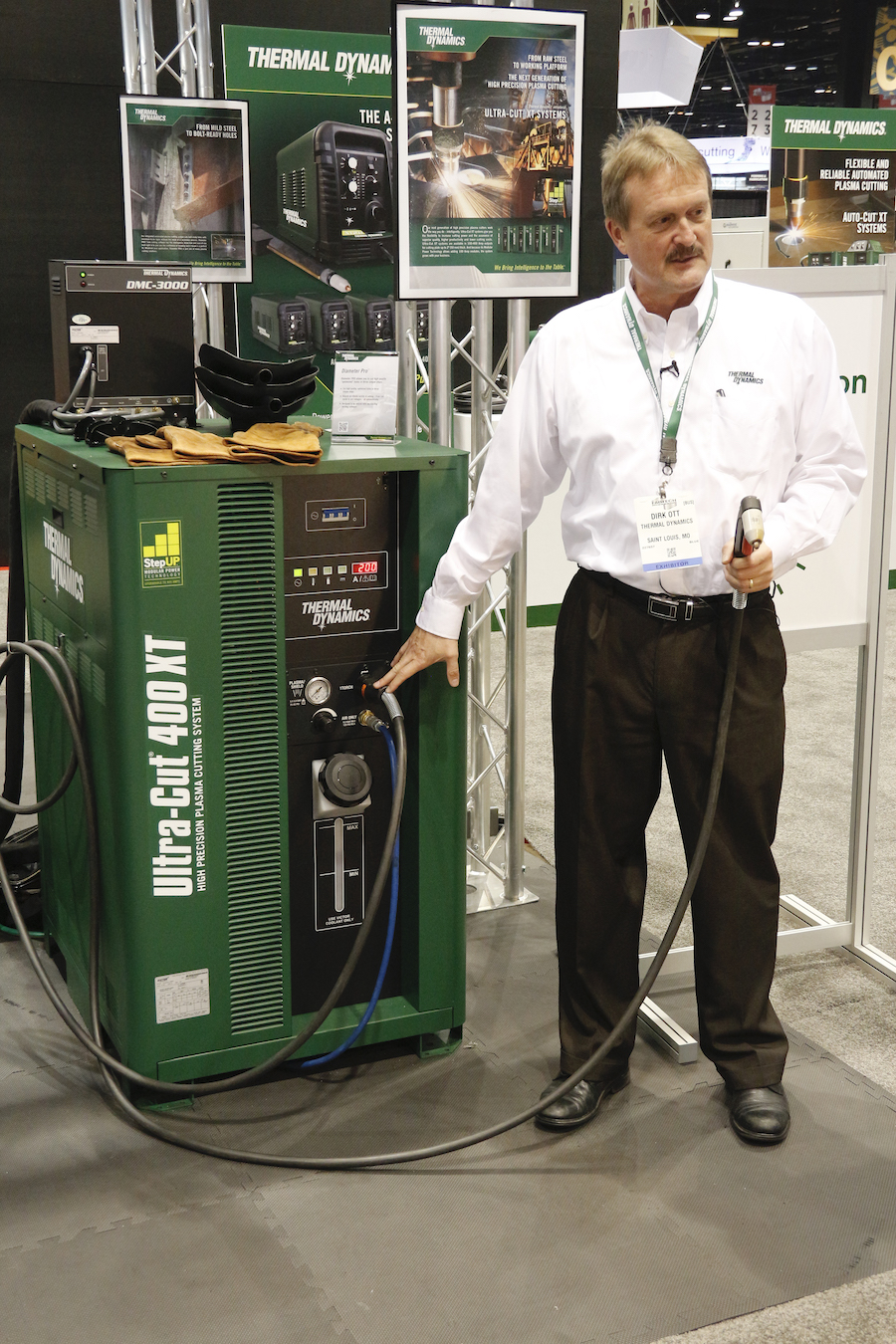 Conversely, industrial controllers like the iCNC Performance use operating systems such as Windows 7 Embedded. This operating system only runs essential routines, which is perhaps 5 to 10 percent of the routines that Windows 10 runs, so it’s much more reliable. They are also shielded from the elements, designed to withstand high-frequency interference and come backed with customer support teams based in the United States.

Lastly, while the price of high-end controllers, power sources and system components varies significantly between manufacturers, the performance can be nearly identical. By comparison shopping when considering a new table or upgrading an old one, fab shops can easily save tens of thousands of dollars while still optimizing cutting performance and lower cost per foot of metal cut.