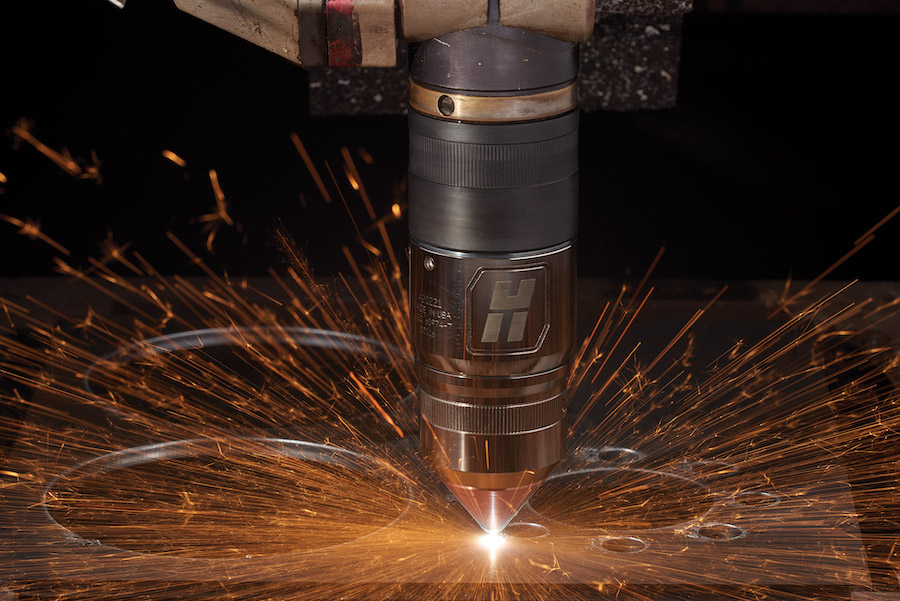 Jorge Amador Jr. had his eye on plasma cutting machines as far back as 10 years ago but wasn’t sure if it was worth the investment. He saw them at tradeshows and marveled at their speed

and efficiency, but still, he questioned whether his family-owned shop was ready to step away from shears and make the leap into plasma, or if he could even get approval to make such a large purchase. Finally, that day came, and his only regret is that he didn’t do it sooner.

Amador, vice president at George’s Welding Services Inc., has been part of his family’s business since shortly after it was founded by his father, Jorge Amador Sr. in 1984 in Miami. What began as a mobile welding shop with two trucks and two welding machines has blossomed into a company of 80-plus employees capable of taking on large-scale projects. Today, they operate a full-service, two-acre facility, providing fabrication and installation of structural steel and miscellaneous metals. The staff consists of civil and industrial engineers, architects, marketing and accounting specialists, a management team, certified welders and general contractors.

The company offers welding services to customers in the construction industry, but part of their motto is “we’re not just welders – we’re fabricators.” To that end, the shop contains far more than just welding equipment. Company leaders have invested in the latest sawing, shearing, bending and punching technology to achieve a high level of quality while also staying on schedule to meet customers’ deadlines.

Major League Baseball fans who have watched the Miami Marlins play a home game might have noticed some of George’s Welding Services’ work in the team’s stadium. The 130,000-ft., state-of-the-art Royal Caribbean production studio at Florida International University is yet another example of the craftsmanship the company provides. The Fort Lauderdale Airport and the Broward County Courthouse offer further examples.

One of the more visually stunning projects George’s Welding Services is working on now is the $802 million “Signature Bridge” connecting Miami Beach to Miami. The massive metal arches, spanning 180 ft. to 330 ft. above the ground, are reminiscent of the Gateway Arch in St. Louis. The design is meant to appear as a fountain with three arches from each side meeting in the middle of the bridge.

What has made taking on the bridge project possible, at least in part, is the addition of a Hypertherm XPR300 plasma cutting system on a Messer Cutting Systems table.

“We once depended on our service centers to get us the parts we needed,” Amador says, adding that many of the parts for the bridge project are now cut using the plasma cutter, including stiffener plates, flanges and steps inside the arches for worker access to maintain the wires used to suspend the bridge. “We should have had this machine years ago,” he adds. “It’s really helped us in our production and acquiring larger projects.”

The XPR300 was introduced by Hypertherm Inc. in early 2017 and it featured the X-Definition plasma system, which is Hypertherm’s

“The development of X-Definition took years and was one of the largest cross-team projects ever at Hypertherm,” says Michelle Avila, communications manager at Hypertherm. “Engineers patented nearly three dozen new processes during development. It was an evolution of the existing high-definition plasma processes.”

Avila says when the XPR technology was first introduced, it was referred to as the most significant advance in mechanized plasma cutting ever, “and I’d say that remains true today,” she notes.

For Amador and his shop, once the XPR300 was up and running, they were able to retire the ancient 1954 Cincinnati shear. Production improved dramatically and the company was able to take on bigger projects. They even generated business cutting parts for other fabricators that don’t own a plasma cutter.

“The XPR300 allowed us to limit the time between cuts with the nesting software,” he says. “This has streamlined the process.”

Amador says Hypertherm sent technicians to set up the machine and trained his employees on it for a week. Furthermore, tech support is available when needed to service the XPR300.

“It was intimidating at first,” Amador says. “When learning any new machine there is always resistance to change. We had a little bit of that, but once the operators got it they never looked back.”

A couple of selling points for the XPR300 include its ease-of-use features and engineered system optimization that requires minimal operator intervention. Avila says these are important components because of the skills gap and the problems fabricators small and large encounter with hiring qualified employees.

“That’s why ease of use, not just for our cutting systems but the software as well, is one of the main objectives our engineers and software developers consider when working on our products,” Avila says.

The XPR300 only has four components – the power supply, gas console, torch console and torch assembly, which accounts for its easy implementation. Furthermore, it’s built for fast torch and consumables changeouts. There are also more threads on the torch-to-receptacle connection, which allows for easy alignment and full engagement after one full turn. Torch changeouts can be made with one hand.

Another technology Hypertherm developed is called QuickLock, which greatly reduces consumable changeout time and electrode misalignment. Another benefit is the ability to monitor

the progress of work, which can be accomplished using a smart phone or tablet computer. Operators can see what the system is doing at all times and run simple process setup tasks using WiFi. Troubleshooting codes alert the operator when it is time to do preventative maintenance or identify issues that need to be corrected.

“We take great care to ensure our systems and software are easy to use,” Avila says. “For example, the software for our CNC walks operators through the process of setting up a new job with a series of questions. Our ProNest and Robotmaster software do the same thing and our teams work very closely together to ensure that the communication between our software and the cutting system is seamless.”

Cost was definitely a barrier for Amador’s company, which isn’t unusual. However, Avila says the wide range of plasma systems available today means almost all companies can afford plasma and more importantly, enjoy a quick return on the investment. In Amador’s case, he says his machine has paid for itself since it was implemented two years ago.