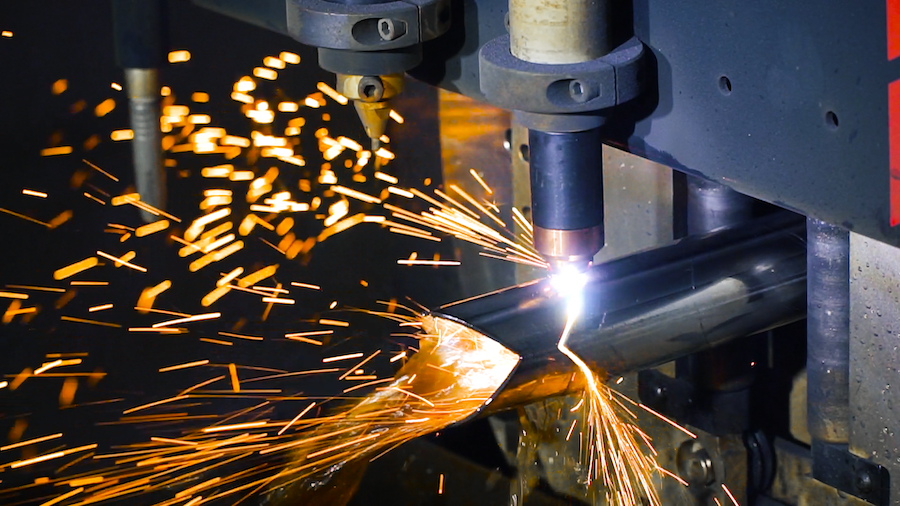 Laser powered tube, pipe and profile cutters do excellent work. They’re fast, highly accurate and able to produce parts with clean, weld-ready edges in a fraction of the time needed for manual processing methods. These benefits are especially notable given the development of tube cutters from machine builders such as Trumpf, BLM and others that have begun equipping their wares with high-powered and relatively hassle-free fiber lasers.

There’s just one problem with these miracle machines: they’re darned expensive. A manufacturer can expect to pay $250,000 or more – often far more – for an automated tube processing system. This is a significant leap of faith for companies with lower production volumes and the ability to perform this work the old-fashioned way through labor-intensive layout, sawing and coping methods.

Milwaukee-based Grunau Co. Inc. was one manufacturer looking for a different option. Now part of the publicly traded APi Group, this 100-year-old manufacturer was originally in the plumbing and repair business. That all changed in 1960 when the family-held company expanded into sheet metal fabrication. Today, Grunau boasts seven locations and several hundred employees, and is active in all facets of the mechanical construction industry and fire protection services.

Justin Warzala has been there for 17 years. The shop foreman at Grunau’s Oak Creek, Wisc., facility, he and his team of 30 or so skilled fabricators focus their efforts on specialty metal products, including structural and equipment supports, catwalks and access platforms, ornamental stairs and railings, and much more.

Like most in the industry, Grunau does all it can to increase the efficiency of its fabrication processes. It was one such continuous improvement project that brought Warzala to a new plasma tube cutter.

“Handrails have long been viewed within the Division 05 Metals scope as ancillary work, something that’s simple and easy to do,” he says. “That viewpoint has begun to change, however; to produce handrails to the quality levels expected today, it takes quite a bit of equipment to do so accurately and efficiently. Ultimately, that’s what led us to invest in an A400 plasma tube and pipe cutter from Bend-Tech.”

According to Jonathan Wawrzaszek, who is responsible for marketing at Bend-Tech LLC in Osceola, Wisc., “There’s significant

demand for a production-grade tube cutting system that doesn’t break the bank.  “Our company founder Cris Merry realized this, and in 2017, added to our line of affordable tube and pipe design software with an equally affordable automated plasma cutter, the Dragon A150 CNC plasma tube and pipe cutting machine.”

As Wawrzaszek explains, Bend-Tech has since replaced the A150 with a pair of more capable models, the Dragon A250 and the Dragon A400. Pricing starts at “about $20,000 for the A250 and ranges up to about $65,000 for a fully-loaded A400,” which is a far cry from the price of the laser tube cutters mentioned earlier. The machine that Grunau purchased can cut round, square, rectangle, angle and channel weighing up to 400 lbs. and 24-ft. in length. Various plasma heads are available, as is a coolant system, C-axis work head and other productivity-boosting options.

Warzala didn’t know any of this when he started his improvement project in late 2018, which ironically had nothing to do with tube cutting. “We produce miles of railings each year, and in the past, we’d lay everything out by hand,” he says. “Sometimes this would take up to a full day, so we developed a laser-based system that lets us project a full-sized image of the railing directly off of the CAD model onto a special table for assembly. And while it was a huge timesaver, all it did was shift the bottleneck over to the pipe preparation area.”

That’s when Warzala began looking around for a better processing option. After kicking numerous tires, he visited a Bend-Tech customer in southern Illinois and saw how their fabricators could program the rails right at the machine and immediately begin assembling them. And although the shop was nowhere near the size or volume of Grunau’s shop, he could immediately see that an automated system like the Dragon is a no-brainer for anyone with higher production volumes.

In another ironic twist, Warzala notes that the deciding factor in choosing the Bend-Tech wasn’t its attractive price tag (although that certainly helped) but rather a fixed cutting head, which made venting the Dragon much easier than competing systems. “The plasma torch stays in one spot, with the tailstock and chuck moving along the guide rails,” he says. “Without that, I would have needed a 25-ft. long fume hood and an equally large fan to move that amount of air. It wasn’t doable.”

Grunau took delivery of the system in early 2019. Warzala says the support was excellent throughout the implementation and training period.

“Bend-Tech didn’t have a fabricator at that time that was doing the kinds of volumes we run here. So we were pretty much in constant contact with them for the first two or three weeks that we had the machine, just working out some small kinks. She runs full tilt now.”

Full tilt is an understatement. When cutting 1 1/4-in.-dia. Schedule 40 carbon steel, which is “around 90 percent of the world’s railings,” Grunau can process a bundle of 60 pipes in a single shift. “Previously, that would have required two, maybe three workers at least five or six days to complete,” Warzala says. “Now we can do it with one guy in seven hours. There are fewer mistakes, and even though we don’t use coolant, cleanup is minimal. I’m very happy with our decision.”