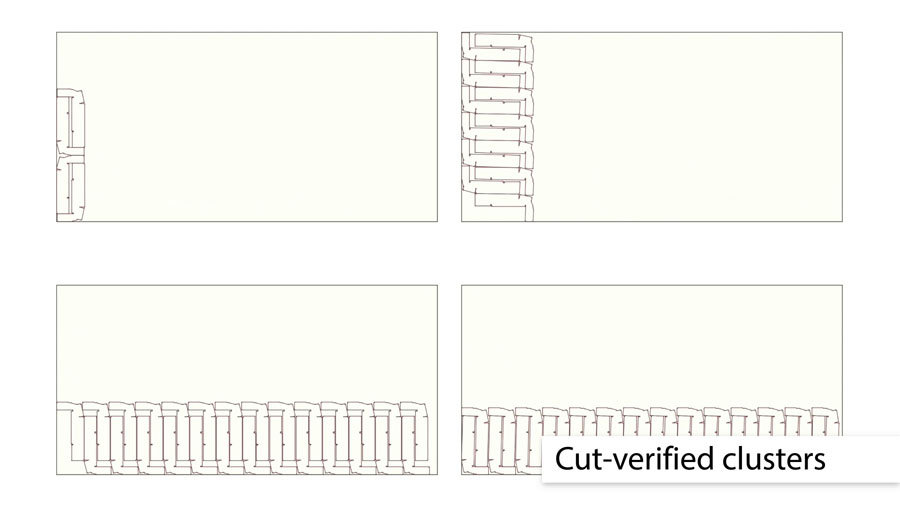 Clustering parts is a basic iterative process in nesting, but ByOptimizer certifies cuts as it goes. Hundreds of parameters are taken into consideration to produce an optimized nest and an optimized cutting program.

“Most nesting software will give you a good nest,” says Frank Arteaga, Bystronic’s head of product marketing. But optimizing software is moving beyond just nesting. Laying out an array of parts on a sheet is just the beginning. Optimizing the layout can require a lot of computer time – or a lot of computers. Bystronic has taken the second approach, and you don’t need to own the computers. In fact, they can be a continent away from your shop.

The company’s ByOptimizer software, introduced at Fabtech last November, is a high-powered version of “cloud computing.” The term can mean different things (see the Editor’s Letter in this issue for a fuller explanation) but in this case it means actually doing the heavy-duty computing on remote servers – “in the cloud” – to which you’re connected via the Internet. Conceptually, this is a new version of techniques that were employed in the earliest days of NC metalworking, first as time-sharing, and later as distributed processing on a company’s internal network. Today, with much faster networking speeds through the Internet, it’s more capable by orders of magnitude. But most people are making those “good nests” that Frank acknowledges on their office PCs. Why go to the trouble of working through a networked computer farm? 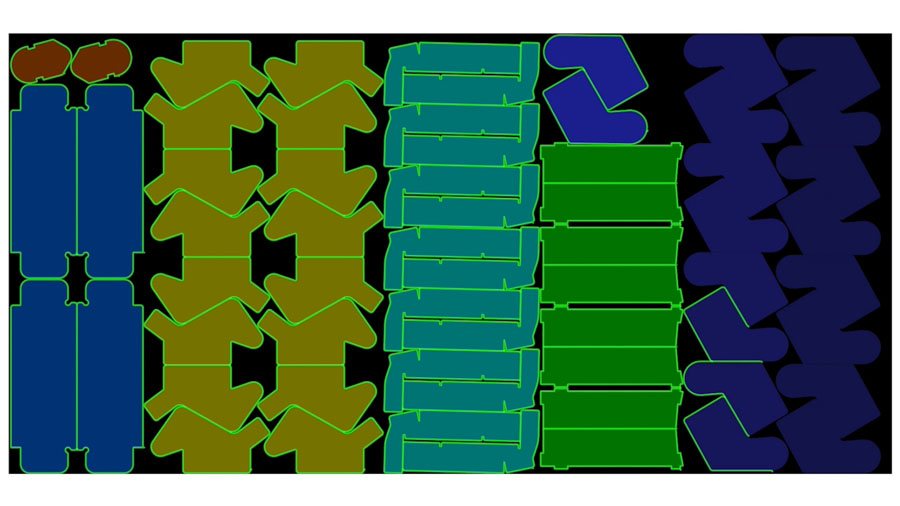 While the program is optimized for efficient sheet use, it’s also optimizing for efficient cut lines. And that efficiency includes database-derived optimization for minimizing heat distortion. This path is partly developed; there is more to do.

Reasons to nest in the cloud

There are two core reasons: much better and more complete optimizing of a cutting program, and much faster results while doing it. A software expert from a competing company points out that optimizing a nest and a cutting path, alone, is an exponential operation: For each increment of improvement, it requires a growing multiple of additional computer processing power. In practice, with all else being equal, it means much more time. That is, if you’re doing the work on one small computer.

The consequence is that you reach a practical tradeoff: How much optimizing is worth your shop time, waiting for the computer to finish before you can actually start cutting parts? By using distributed processing, applying multiple computers to the task at once, Bystronic seeks to break the processing-time barrier and to move that tradeoff balance far off in the direction of more optimizing. 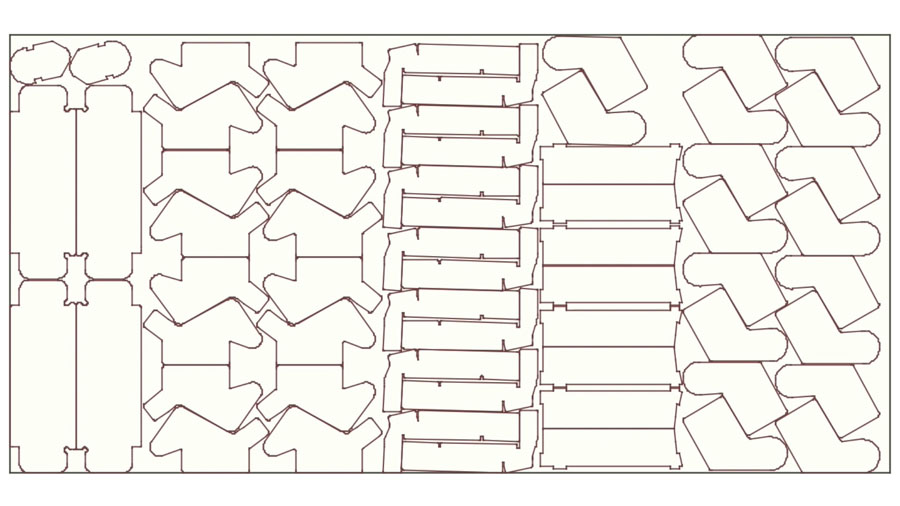 Clusters have to be packed onto a sheet. Each part in this example has an optimized cluster shape. Then the clusters were packed together in another optimization.

When we think of big computer tasks, laying out parts on a sheet doesn’t come to mind. But it’s deceptive. Layout actually is a big iteration job, in which the computer conducts a guided trial- and-error series of test-fits. The more iterations, the closer you approach the most efficient use of material. And, if you’re adding in other considerations, such as different cut widths for different sheet thicknesses, there is a multiplier for each iteration.

ByOptimizer uses a vast number of such multipliers, which are parameters within the program. It takes roughly 300 variables into account. This is heavy- duty computing.

Besides the raw number-crunching, the program is accessing databases of cutting parameters that include laser power, material type and thickness, and many operational details that add up to a complete program, ready to run your laser.

Back to the core program, the functioning of the algorithm itself: it uses a technique the company calls Dynamic Clustering. This is the basic element in minimizing waste material. It takes one part and decides the most efficient way to cluster multiple copies together. Then it takes this cluster, multiplies it, and then clusters the clusters to make the tightest possible layout pattern on the sheet.

In this dynamic process, the program is rotating parts, moving lead-ins, relocating lead-ins, and optimizing cutting sequences. If juggling is a useful metaphor, it’s juggling dozens of balls at once and changing their relative positions as it goes along. And a cluster may consist of more than one part.

Arteaga gives an example: “Each piece is individually analyzed, and once the optimum clustering array is achieved, it is placed in a temporary library. All the parts on the sheet are simultaneously analyzed in this way. Next it will calculate how to put these parts on to the sheet, all the while rearranging the clusters in the process if necessary.”

Another example: “Say you have a cluster of four squares and each square has a hole in it,” he says. “You’re going to cluster these four pieces together and in the end what you’re going to end up with in this cutting sequence would be to cut the four holes, next cut the common lines between them, and then cut the outer perimeter as one part.”

The cutting order is another optimization issue that gets a special kind of attention. Besides the optimal geometry of cutting paths, another key issue is heat buildup, and that varies with material type and thickness. Once again, ByOptimizer calls upon its databases of known relationships and chooses a path that causes the least local buildup of heat and thus the least distortion and part inaccuracy.

When the program places the clusters on a sheet, it goes through more iterations. It will try to arrange them vertically on the sheet, or horizontally, seeking the most efficient layout. All the while, it’s taking into consideration the cutting path that will result in the fastest cut: the greatest number of common lines, within the constraints of heating effects, material thickness, and so on, through a variety of relevant parameters.

“If you had a part that originally was cut out of thin gauge material, and then you cut the same part out of thick gauge material, it could be a totally different cutting sequence,” says Arteaga. “The lead-in lengths are going to be different. Everything is going to be completely different, and a lot of it will be because you have different heating considerations to deal with when you’re cutting thicker material versus thin material.”

From theory into practice

The ideas behind ByOptimizer are clear, and the principles make sense. What we can’t evaluate is its performance in the field, especially comparing it with other nesting programs that have their own performance claims.

So we’re publishing a case-history story this month (see “User Evaluates Cloud-Based Nesting” ) from a user who has made actual comparisons with his PC-based nesting program. It adds an important dimension to this technical discussion. We invite you to read it and to see for yourself what a user has experienced with the program.

Meanwhile, we’ll be watching to see if more cloud-based applications show up in the fabricating field. Again, there are certain characteristics to an application that make it potentially attractive: juggling large numbers of interactive parameters, and large series’ of iterations. There are several such possibilities.