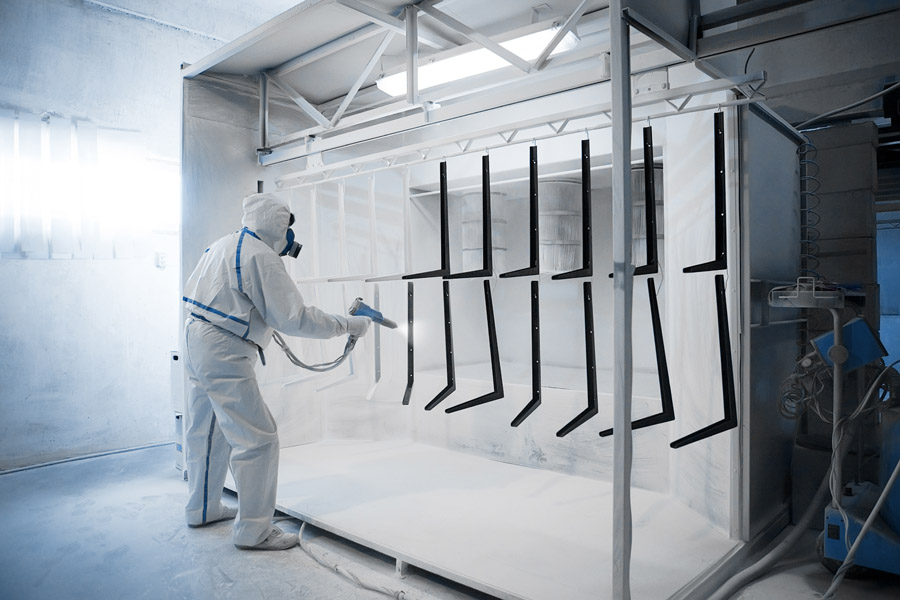 In manufacturing, a general rule of thumb is that the fewer times a component, blank or other raw material is handled, the better. Whether producing a part, perfecting a process or otherwise accomplishing a task, the goal is to do the job in the fewest steps, which hopefully translates into cost and time savings and increased product quality.

So, when the editors of FAB Shop Magazine Direct discovered a technology designed to reduce the number of production steps and end up with a better finished product, we wanted to take a look. The technology is a patent-pending, powder-coating process that has been developed to save curing times, reduce energy costs and provide improved corrosion resistance and part edge coverage.

The process is called the Powdura OneCure and it was developed by The Sherwin-Williams Co. Geared originally for the large equipment market, including farm, construction, trailer and industrial equipment, it allows for a dry primer and a dry topcoat to be applied and then cured together to create a strong bond between the two layers. 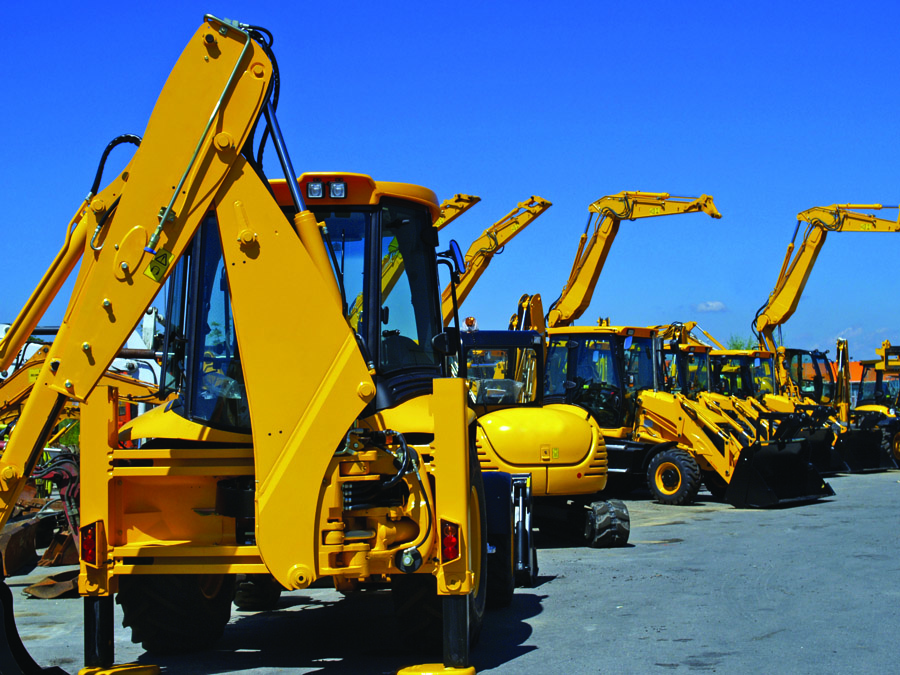 Construction equipment such as these earthmovers is a perfect application for the two coat, one cure system because large parts are quickly cured.

Today, more fabricators apply primer to their metal products to increase corrosion protection. Traditionally to do this, the primer would be applied and then cured. After that, the topcoat layer would be sprayed on and then cured in: Two paint applications and two heat curing operations that equate to a lot of heating, cooling and downtime.

“Some companies have a primer booth, so they prime it, send the part through an oven to cure and then send it to another booth where they paint it,” he says. “The part then goes through the same oven or a separate oven to cure the topcoat. Other companies that don’t have a big setup, prime the part, send it all the way through the cure cycle and send it back to the same booth to topcoat it. Others do this in a batch setup and accomplish it manually. Essentially, they spray the batch in a booth, roll that rack into an oven, roll it back out again to perform the topcoat and then roll it back into the oven.” 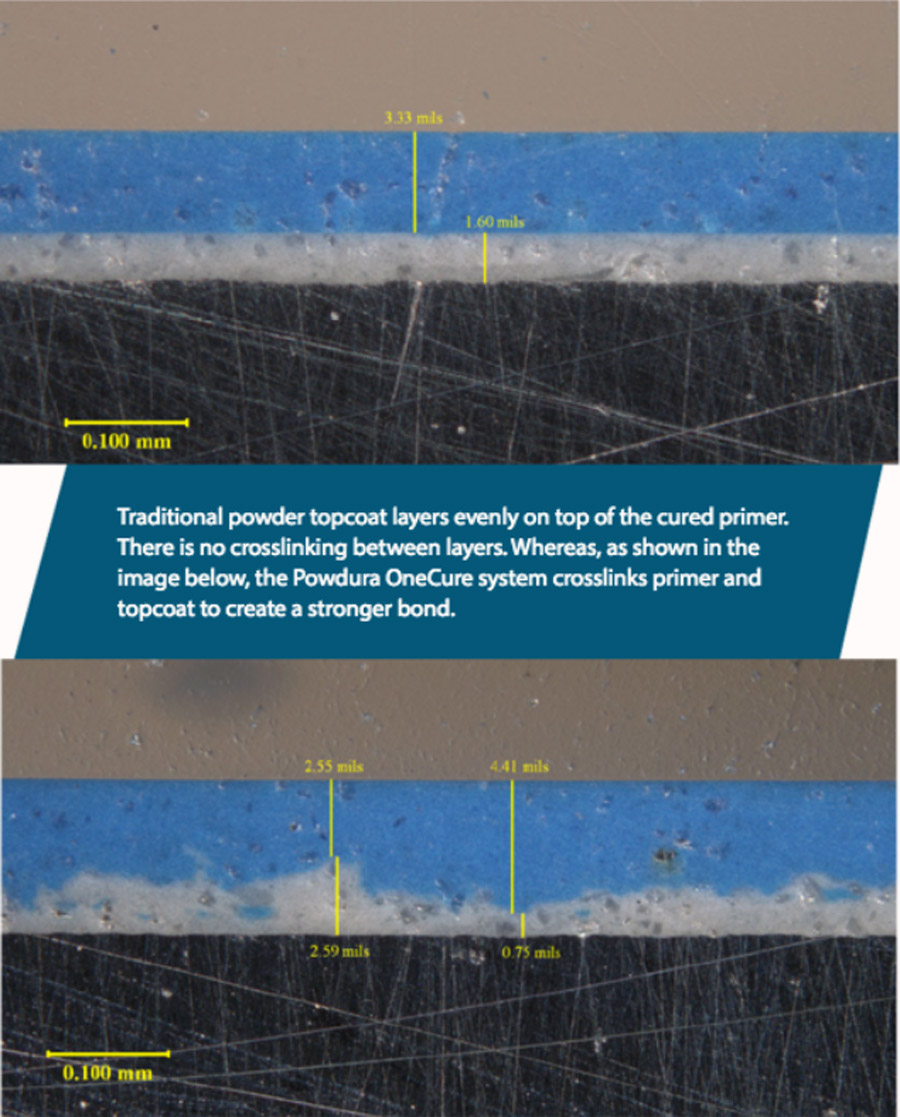 In either scenario, that’s a lot of rolling in and out of spray booths and curing ovens.

The Powdura OneCure system, says Crosley, allows for the primer and the topcoat to be sprayed in the dry form (in one booth or two, depending on available equipment or if the company is trying to reclaim overspray) and then cured together.

Why does this mono-cure system matter? Besides the constant movement, there are other factors why it might be best to coat twice, cure once.

First, it is important to note that all powder coats are heat cured as opposed to UV cured or air cured. Each time a component is heat cured, the metal must reach a specific temperature for a specific amount of time to allow the catalyst to activate and the resin to cure.

However, before the subsequent topcoat can then be applied, the metal must cool. After cooling, the topcoat is applied and the metal component is again moved back into an oven for curing – after it gets back up to temperature and is cured for the specific length of time.

A typical temperature for curing is 400 degrees F at around 10 min. of exposure. To be clear, that is not ambient temperature; that is the heat the steel must reach. Big parts, for example, might take a long time to get to temp.

“In the past, when a company would prime, they’d have to put it in the oven. A big metal piece could take an hour just to get to temperature,” Crosley says. “Then, they bring it back out and have to let it cool down because you can’t paint something that’s a true heat sink. Then they paint it again and put it back in for approximately an hour.”

With the Powdura OneCure system, Crosley says this same piece can be painted twice and then “baked” for just one hour. Essentially, the previous four-step process of paint, cure, paint, cure, has been cut to three processes: paint, paint, cure. A 25 percent increase in production is accomplished, and available oven capacity is gained.

While this Powdura OneCure system is geared for large equipment manufacturers, it can be sized for smaller jobs. Crosley cites one application where a customer produced architectural railings out of steel for the rainy Seattle market. While these parts were not big, it did take them about one hour to produce a railing: 10 min. of painting, 18 min. of curing, 10 min. of painting, 18 min. of curing.

“With the Powdura OneCure system, we did it in only 10 min. of painting and 18 min. of curing,” he says. “It cut this shop’s production time by 50 percent.”

The Sherwin-Williams formula co-reacts and crosslinks the two separate chemistry layers without the need to gel or cure the primer, according to a company press release. “The actual crosslinking process of separate chemistries is in the patent and cannot be discussed except generally,” Crosley says. “Sherwin-Williams is the only supplier offering the best of both worlds – a two chemistry application.”

First, note that all powders are a crosslinking technology, which means that once the part “sees” a certain temperature, the catalyst opens up and crosslinks the paint. What Sherwin-Williams has done is to develop a way to crosslink and cure two different chemistries together. 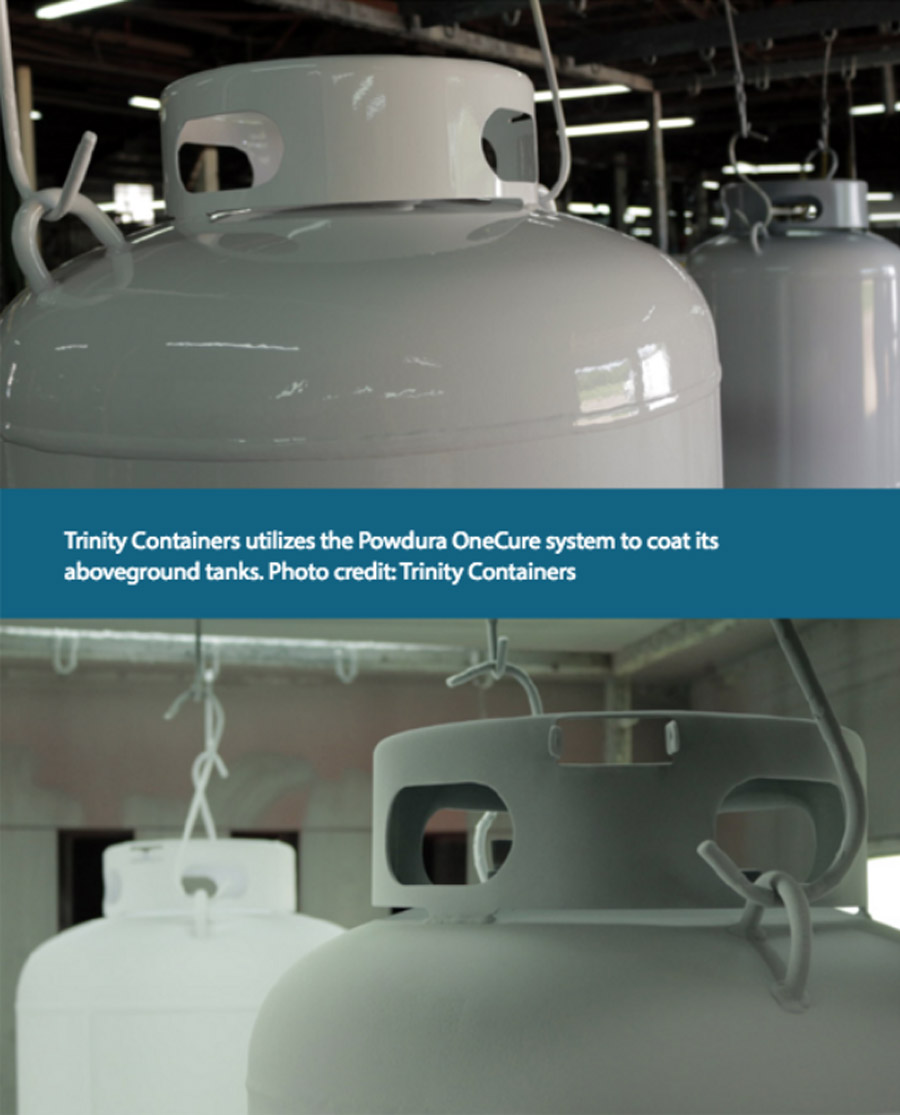 “That gives us not just two layers of paint,” he says, “but it’s two bonded layers, and that crosslinking density between those two coats provides superior performance.” 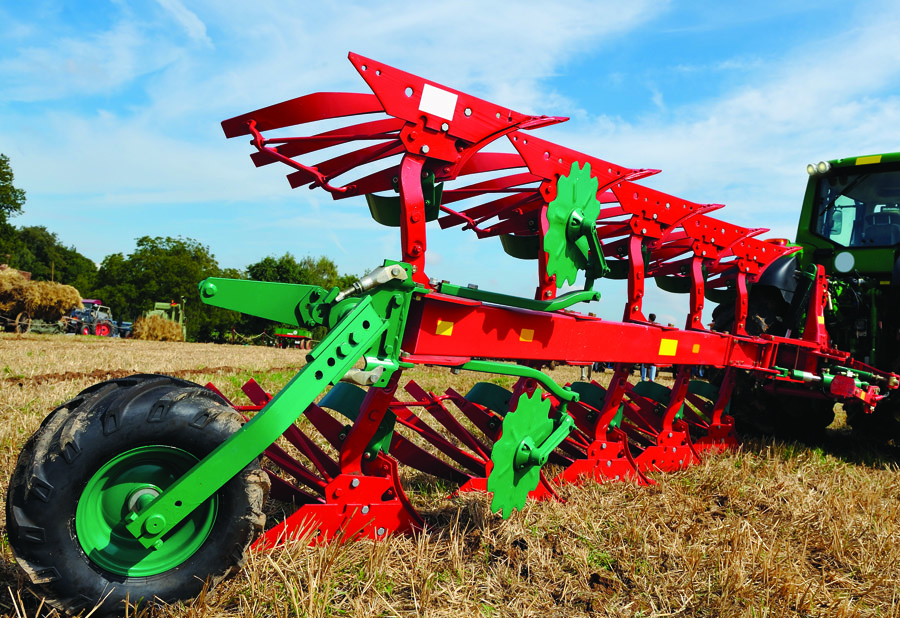 In general, edge coverage is a strength of powder coating as electrostatic charged powders are automatically drawn to the grounded metal substrate. Crosley adds that the Powdura OneCure technology improves on this through “flow rates and other features of our primer systems designed to give you better edge coverage, so you get a little bit more hang, and the topcoat is designed to give you a better appearance.” 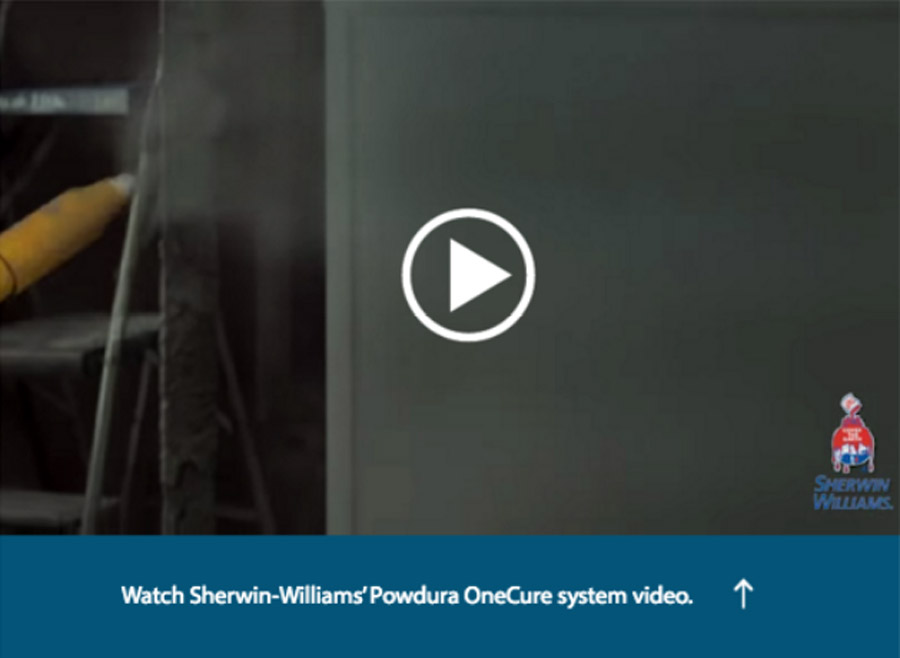 Today’s industry is striving to keep the coatings looking good, and many are doing so by using epoxy coatings because they’re designed to be more corrosion resistant. Crosslinking the epoxy coatings to the polyester topcoat helps improve on these performance attributes, which are critical to manufacturers of equipment meant for use in harsh environments.

To test its corrosion resistance, Sherwin-Williams subjected samples to various destructive testing, such as cyclic corrosion tests intended to produce failures representative of the type found in outdoor corrosive environments. The company exposed specimens to a series of different environments, such as salt spray and fog, in repetitive cycles. In addition, it exposed the samples to various chemicals to test its resistance to these materials. Here are some of the findings:

“We feel that for any company doing these types of processes, the Powdura OneCure system can really benefit or save them money by removing steps from the process or not requiring them to buy more equipment because they may only need one oven instead of two,” Crosley says. “Just the time savings that you can achieve by doing it this way is a highlight of why we think this product has a great place in the market.”