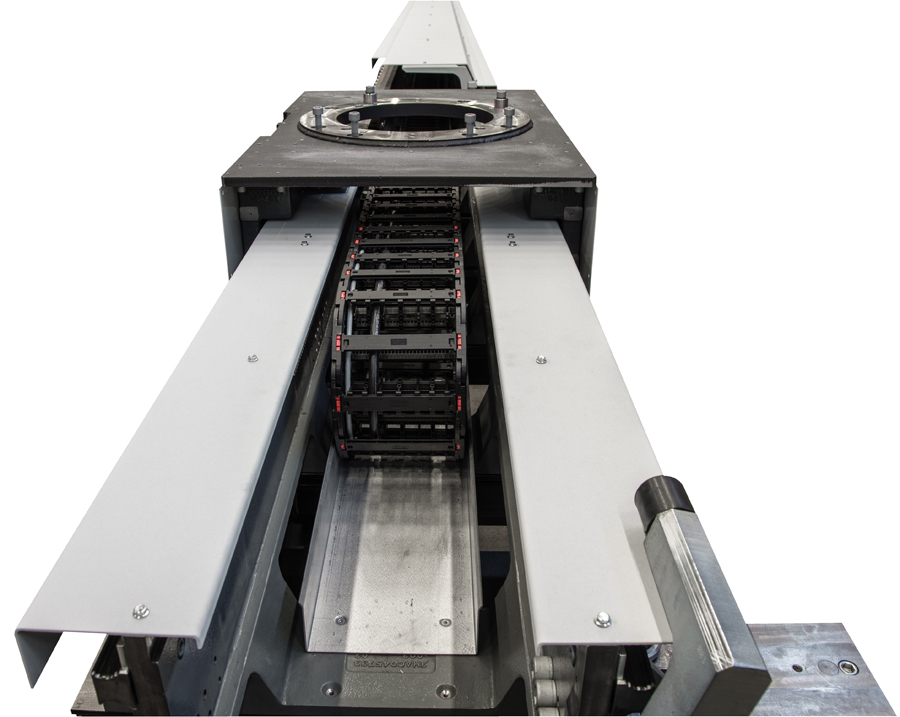 All shops face space challenges. Fabricators want the greatest amount of performance and capability in the smallest amount of real estate. Therefore, the track system itself has to take up the smallest footprint possible.

“It’s important to get from point A to point B quickly, but you also want smoothness and accuracy,” says Mark Oxlade, market development manager, welding and cutting, ABB Robotics. “Cycle times and throughput are important, too.”

A track system needs to offer flexibility so functionality and extended working ranges can be added later. And it needs to accommodate rapid product changes.

“Flexibility allows you to make a product one size today and then keep the backdoor open for the next generation of products,” Oxlade says.

These challenges are addressed with innovations in track systems, in particular the IRBT 2005 track motion platform from ABB for its medium family of robots and transfer applications.

A main application for the IRBT 2005 is welding long parts. Parts can range from pipework to lampposts to masts for forklift trucks.

“The minimum length of the part that would make this a viable option is 10 ft.,” Oxlade says, adding that a track system is an excellent way to extend the reach of a static robot, allowing the job to get done with fewer robots. “The robots and tracks are similar in level of investment, but you’re going to get better process options by moving the robot than trying to stretch that robot to its limit.”

A static robot that is reaching the extremes of the work envelope means compromised torch angles to the parts, cautions Oxlade.

“So the next step is to buy a bigger, heavier payload robot to provide the extra reach or put a second robot in,” he says. “But if you move the first robot, say 3 or 4 ft., you get a much better torch-to-work attitude, which means better quality and cycle times. That’s a good way to look at it.”

In addition, the IRBT 2005 is designed as a narrow track. Most track systems are designed with many of the key components, such as cables, gear boxes, motors, rails and bearings, mounted on the outside of the track. This external exposure not only leaves the components vulnerable to potential damage, it also tends to occupy additional space. The IRBT 2005 places these components on the inside.

“It’s designed to be slim in the carriages, which gives you more robots per square foot, so to speak,” Oxlade says.

For high performance, the ABB IRC5 controller runs the robot and the IRBT 2005 together as one dynamic model. QuickMove and TrueMove are two integral motion control technologies of the controller, allowing ABB robots and external components to perform in a highly efficient manner.

To provide flexibility, the modular IRBT 2005 consists of 1-m-long sections that can be connected to form a track system for robots and transfer applications between 2 and 21 m, allowing it to be adapted to various applications. It is designed to accommodate rapid product changes in applications that require an extended working range and high degrees of speed and accuracy, including arc welding and material handling.

The IRBT 2005 is available with up to two carriages as a robot track system, with additional carriage plates to carry any necessary process equipment so it moves along with the robot. For arc welding, the carriages can carry equipment such as the welding power source, heavy payoff wire packs and torch cleaners.

“Without the additional carriages, you dress the robot externally, which means long cables,” Oxlade says. “You should always try to make the cables as short as possible so weld quality remains consistent. With long cables running from the power source to the robot, quality can degrade, so whenever you can, keep the power source with the welder.”

As a transfer track system, the IRBT 2005 is available with up to three carriages.

Other features a track system should have include a high payload. Previous generations of tracks have a payload of around 1,500 to 2,000 lbs. At 2,600 lbs., the IRBT 2005 payload is quite high, which means it can carry many heavy robots or parts. The transfer track is good for applications such as indexing different fixtures into an automation cell and transferring large, heavy components between working stations.

Another feature to look for is robustness in terms of withstanding the environments found in welding, which means spatter, dirt and grime. In addition to mounting all of the components on the inside of the track to save space, the components are covered. This means they are going to survive much better in the welding environment than previous generations of track systems. Although mounting the components on the outside of the track provides ease of access, it leads to increased wear. Better protection means better longevity.

The IRBT 2005 also features a built-in lubrication system and integrated leveling feet, which provide a flat track and make the track system easier to set up.

Other features to look for in a track system are a good return on investment and long life.

“When you’re building a cell, you can increase work envelopes with different size robots or other positioners,” Oxlade says. “So while the track is another solution to provide a way for reaching long parts, it has to be cost competitive. And you want to buy a track that is going to last a long time. Overall low life cycle costs are important.”