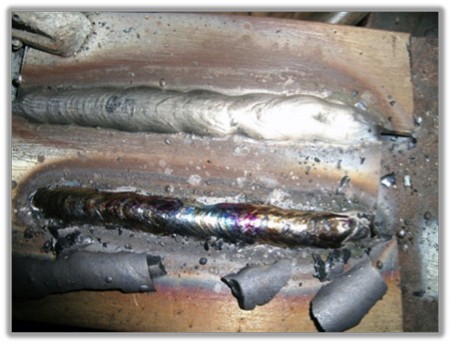 The formation of the proper pretreatment conversion coating and adhesion of subsequent coatings to welds is influenced by the cleanliness of the weld area. The welding process can create various inorganic soils depending on which type of welding method is utilized.

These inorganic soils must be removed to ensure the success of the subsequent pretreatment and coating operations. This article provides information on the weld spatter and weld slag soils created during the welding process and presents the recommended method of removal for each one.

The inorganic soils created during the welding process are localized in the area adjacent to the weld and include weld spatter, weld slag, weld scale and various elements that can be found in the weld filler metal. The area that displays the effects of the welding process is referred to as the heat-affected zone (HAZ).

The HAZ is the area of base material that is not melted and has had its microstructure and mechanical properties altered by welding. The heat from the welding process and subsequent re-cooling causes the changes in the HAZ. The extent of the property changes depends primarily on the base material, the weld filler metal and the amount and concentration of heat input by the welding process. The different areas of the HAZ are shown in Figure 1.

Weld spatter is defined as small particles of molten metal expelled from the weld puddle that adhere to the base metal surface. The primary cause for the formation of weld spatter is a disturbance in the molten weld puddle during the transfer of wire into the weld. The disturbance is typically caused by insufficient shielding gas, dirty base metal, too high of travel speeds, too long of wire or the relationship between amperage and voltage. This is usually seen when the welding voltage is too high or low or the amperage is too high for a given wire and gas combination.

Spatter may also be generated as a result of the gas or gas mixture selected for shielding. Weld spatter must be removed from the surface of a part that is to be painted. It is very difficult to coat evenly if spatter remains on the part and the coating is often loosely adherent.

Both factors lead to premature coating failure, either by corrosion formed around the poorly coated areas or by the spatter being knocked off the part, exposing the uncoated base metal. An example of weld spatter is shown in Figure 2.

Weld slag is formed when flux, a solid shielding material used in the welding process, melts in or on top of the weld zone. Slag is the solidified remaining flux that forms over the weld bead as the weld area cools.

Shielded metal arc welding (SMAW or stick welding) and flux-cored arc welding (FCAW) use flux materials to produce slag that protects or assists in protecting the weld during weld puddle solidification. The gases produced from the slag systems for either process are the same as those typically supplied externally in other methods of welding. Usually both of these welding processes also produce greater amounts of spatter.

The slag then has to be removed mechanically to prepare the weld for subsequent processing as it is loosely adhering to the weld bead and does not present a surface that is receptive to coatings. The slag that is removed also contains many of the elements present in the weld filler metal that have floated to the surface of the weld and may cause coating issues if not removed. An example of weld slag is shown in Figure 3.

As previously mentioned, there are welding processes that do not use flux and use externally supplied shielding gases. Gas metal arc welding (GMAW or MIG welding) and gas tungsten arc welding (GTAW or TIG welding) both use an inert or semi-inert gas mixture to protect the welds from contamination, therefore producing no slag layer on the weld.

Welding soils must be removed to provide a receptive surface for subsequent conversion coating and coating applications. There are two methods of removal: mechanical and chemical.  Mechanical methods consist of manual or automatic abrasion. The chemical method typically utilizes an acidic pickle solution, although neutral organic compounds have been used in specialized circumstances.

Scraping, or chipping, is often used for easy-to-remove spatter. The tools of choice are typically a chipping hammer or chisel.

The use of chemical anti-spatter materials can also be used to minimize or eliminate the adherence of spatter to the base metal. The anti-spatter is applied to area that is to be welded and leaves a protective film on the metal that prevents the spatter from sticking once solidified.

Weld slag also is removed using those same mechanical methods. Scraping, or chipping, is often done with a chipping hammer or chisel to remove slag because it is usually loosely adhered and easy to remove. Grinding and sanding can also be done using abrasive wheels or belts as well as manual or power abrasive brushes (wire brushes). Blasting is typically done using abrasive blast cleaning or abrasive media blasting.

Removal of weld slag using chemical methods is often attempted and very rarely successful. The slag is very difficult or impossible to remove using most available acid pickling products. Slag is alkaline in nature and normally present as a thick layer. The acid pickle attacks the slag starting with the outer surface, removing it in layers.

Because the slag is alkaline, it also partially neutralizes the acid during the pickling action. Process dwell times are typically 60 to 120 seconds for an acid pickle, which usually does not allow enough time for the acid to fully remove the slag.